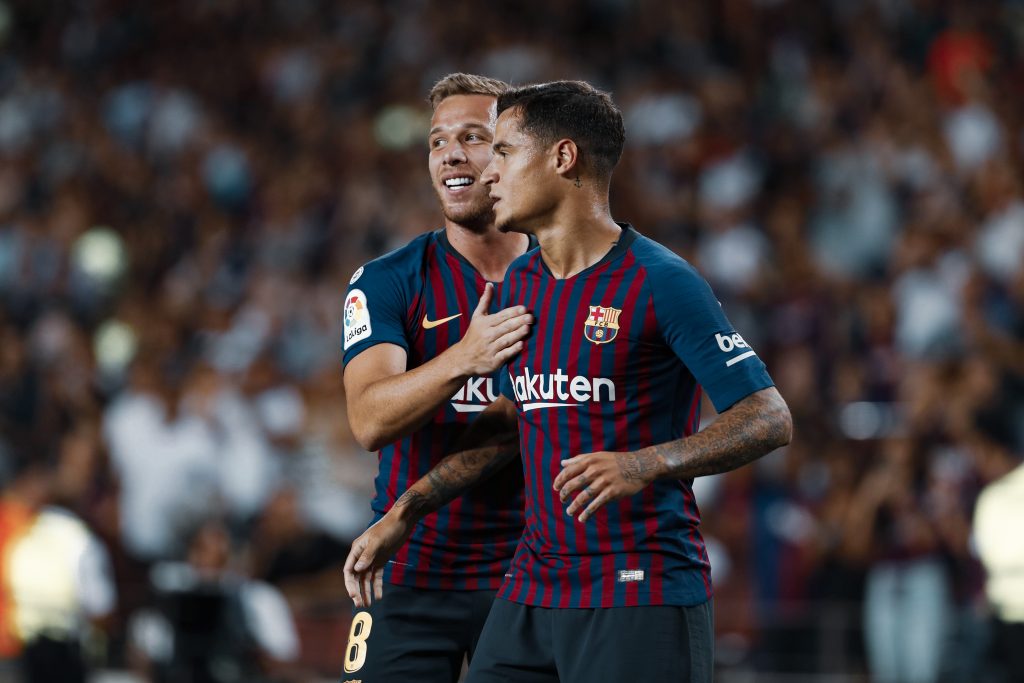 With Barcelona in desperate need for money as Neymar and Lautaro are targeted, the board may choose to sell one of Arthur or Coutinho in order to raise funds for the two priority signings.

The obsessive pursuit of Neymar and Lautaro Martínez will completely influence the plans of Barcelona in the upcoming transfer window. Their star status and costly investment it would involve, together with the coronavirus crisis and the club’s limited economic resources, will make the board squeeze every single cent they can. And, in the world of football, there’s no more precious value than the players. Therefore, a remodelling of the blaugrana squad could be expected in the summer. While the team needed it long ago due to its ageing backbone, the reasons behind such renewal will be the search for the PSG and Inter men.

❛ All the great players, how can I not like them? Neymar is one of them, but as things are, you have to consider what is possible and what is not possible. We know that these footballers cost a lot of money and that it is not easy to bring them ❜

To reach the over 300 million that Ney and Lautaro could cost combined, many many footballers could get sold. Several will have a cheap price, and others could have a higher cost and boost the budget. Barça has, and could have, many expensive attackers upfront, more so if Neymar and Lautaro were signed. They would join the likes of Messi, Luis Suárez, Griezmann, Dembélé, Ansu Fati and Trincão. And none of these are expected to leave, with Suárez and Griezmann wanting to stay, and Quique Setién valuing Dembélé. This could lead to an unbalance in the squad, with many offensive superstars but, by contrast, more departures in other zones.

In particular, and apart from the veterans of Vidal and Rakitić who would not provoke a huge income, there are two names that have been very linked with an exit in the upcoming months. These are Arthur Melo and Philippe Coutinho. Both of them could involve a high fee, appealing for the board’s desperate quest for money. Arthur is young and extremely promising, while Coutinho has not been in brilliant form in the past two seasons but his quality is well known all around Europe. Thus, if Busquets and De Jong are seen as starters in a midfield three, one of Melo or Phil could be considered unneeded for the starting XI and be transferred as a consequence, due to their high value.

❛ In my opinion, Coutinho plays better in deep areas of the pitch rather than the wings ❜

Setién, though, seems to want both Brazilians. In Coutinho’s case, he apparently contemplates him as a midfielder. “He’s a great player and I really like him”, Quique told RAC1, and, according to Marca, he intends to deploy him in midfield, as a number 8. On the other side, Barcelona will have to pay Liverpool 20 million euros more when Coutinho reaches 100 appearances for the azulgranas. He currently stands at 74, so it could be easy for him to reach that milestone in case he stays past the summer. While Barça could be tempted to sell him, today Mundo Deportivo have stated that he will not leave unless an offer of over €100 million arrives. Consequently, it is likely that he will stay.

That’s why Arthur has been so rumoured with a way out of the club, to which he arrived in 2018. Loved by culés since he delivered a stupendous performance at Wembley against Tottenham, the former Grêmio youngster has been making steady progress in spite of his fitness and consistency problems. When he has been fit he has made an instant impact on the ball circulation and fluidity, and he has proven that, once he acquires the required concepts he is missing, he could be the man Barça have been looking for in midfield for years. A player capable of connecting the past with the future of Barcelona, while being ready for the present too.

No wonder why fans want him to stay, and why Arthur wants it too. “There is always speculation, but my idea is clear. The only option that interests me is staying at Barcelona. The supposed interest of big clubs is always flattering and a positive sign, but my mind is on playing for Barcelona for many years”, the number 8 recently said, after links with Inter and Juventus. The rumours involving Juve are the strongest ones, as the clubs have advanced the agreement to trade Pjanić for Arthur, according to Oriol Domènech. Pjanić would be willing to arrive to the Camp Nou, but the 23-year-old South American has stated that he does not want to leave even if the board are looking to convince him to depart.

By putting him up for sale, however, Barcelona are risking both their long-term and short-term project for two forwards. With the obsession of Neymar and Lautaro, the Catalans’ transfer policy will be a matter of balancing the economic accounts, the footballing needs, the egos, the players’ preferences and the manager’s preferences. But right now Barça is far from being balanced.