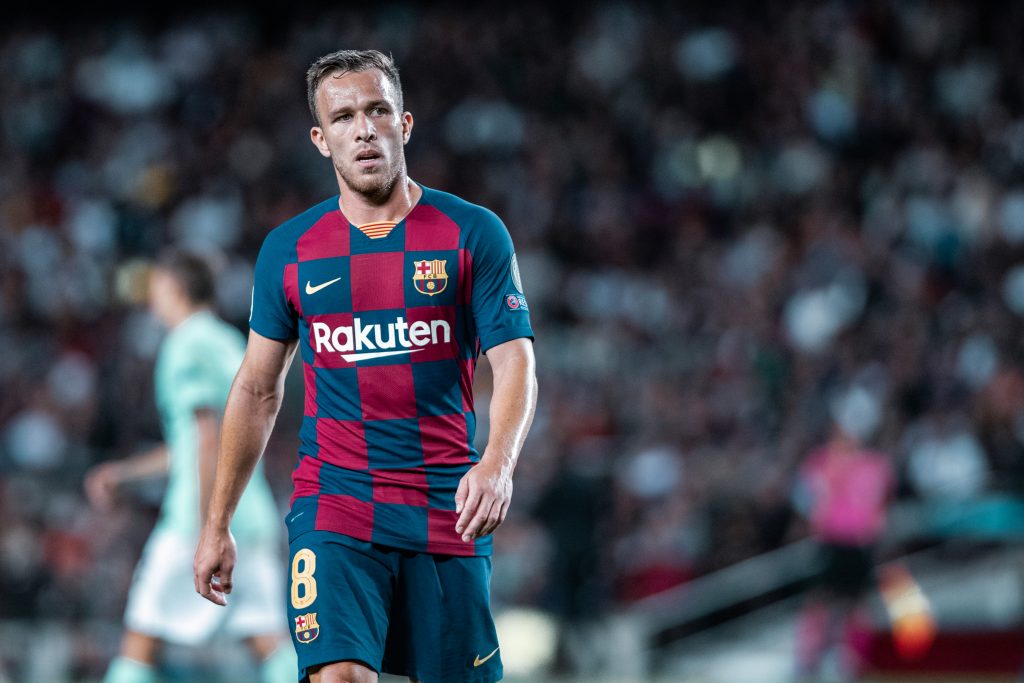 Header Image by Marc González Aloma / Action Plus via Imago

The situation of Arthur Melo at Barcelona continues to provide never-ending rumours and fumes of development for the media to pounce onto. Despite Juventus stepping up their interest in him, Arthur needs to stay focused on the challenges his club has ahead.

As the rumours of a swap deal between Barcelona’s Arthur Melo and Juventus’ Miralem Pjanić continue to get stronger, all parties involved should maintain the focus on the on-field action as they run the risk of losing attention at a crucial stage of the season. For Arthur, in particular, he can still be very valuable for coach Quique Setién and has time to prove that he deserves to stay at the Camp Nou.

The story so far

At this point, the rumours on Arthur’s future are no longer surprising. Over the past few weeks, Juventus were showing signs of moving in the transfer market. They are in desperate need to find a regista, or deep-lying creator, without which manager Maurizio Sarri won’t be able to implement his system. Even though Miralem Pjanić is continually being used in that role, he is unable to fulfil it to the entirety of its requirements. As a result of this, Juve decided to look for alternatives. While Sarri’s eternally favourite Jorginho continues to be looked at, it is Arthur who they badly want.

However, Arthur has stated over and over again that he has no intentions of leaving the Catalan outfit. He is only into his second season at the Camp Nou and has high expectations and hopes of succeeding. Unfortunately for him, the current regime’s unpredictability doesn’t guarantee his future despite publicly stating that he wants to stay.

“There will always be rumours, but I’m honestly really clear about the fact that the only option I’m interested in is staying in Barcelona”

Arthur Melo
on his future

From the coach’s perspective, there is nothing but ambiguity. Quique Setién claims to have spoken to Arthur about his future, but also says that he isn’t focusing on the transfer market. The Spanish tactician believes that this isn’t the right time to be focusing on rumours. He intends to see every single player giving his best in the current title race.

“We certainly discussed his future, but not for very long. Many circumstances are affecting the transfer market this summer, but the reality right now, is that we still have objectives to achieve this season and I will need help from everyone in the squad

We are in the running for La Liga and the Champions League. I don’t want to speculate right now, as we have to focus on the current challenges”

Setién’s quotes don’t seem to show signs of confidence. Naturally, he is bound to steer clear of the rumours at a period where he needs to focus on football. Nevertheless, the fact that he hasn’t confirmed that Arthur is staying for sure is an indication that even he may not know what is going to happen. There is a possibility that he is brushing the rumours aside because he has no clarity of the situation.

Indeed, the lack of certainty over Arthur’s future is something worth worrying about. The board has a proven record of making disappointing and horrendous sporting decisions, and so, losing Arthur won’t be a surprise. Still, the fans, the manager, and most importantly, Arthur, should know that other significant areas require attention.

At the moment, Barcelona sits at second-place, with Real Madrid on top because of the head-to-head record. Having already suffered an injury blow of losing Frenkie de Jong for an unspecified time, Arthur is now crucial for the days ahead. He has the technical capabilities to move the ball forwards in addition to his unbelievable press-resistance. Though Setién has options to replace Frenkie, the midfield likely becomes more static without him.

While a swap between Arthur Melo and Miralem Pjanić is certainly on the cards, both should try to keep their head on the game | Photo by Jonathan Moscrop / Sportimage via Imago

With eight critical games ahead, more lacklustre performances like the one against Sevilla a few days ago would virtually put the title in Real Madrid’s hands. While the club is inclined to turn to Lionel Messi in times of need, the Argentine cannot be left to do everything on his own. He needs support, especially from the midfield. Setién will be hoping to see senior players like Iván Rakitić step up to the occasion.

Notwithstanding, in reality, it’s Arthur who is most likely to solve the midfield problems. He hasn’t been playing much this season because of injuries, but now that he is fit, Setién will probably start him. The Brazilian has already shown the world what he is capable of. And so, he is expected to do well now, especially when the midfield options are thin.

Winning the La Liga and the Champions League is still not out of hands. So, Arthur must look to help his side by entirely focussing on Barcelona. Indeed, the rumours are always distractive, but he shouldn’t let them get the better of him. He should prove it to the media and those who speculate his exit by performing on the pitch. The same intensity that he displayed while saying that he wants to stay must be carried onto the pitch.

Why is Juventus’ board so persistent?

Before the restart, there were just whispers from one or two outlets regarding Juve’s interest in Arthur. But, once football returned to Italy, through the Coppa Italia, it became clear that they badly need a regista. The Bianconerri’s humiliating and dull performances in the semi-final against AC Milan and the final versus Napoli gave the board something to think about.

Sarri’s 4–3–3 system works for the initial 15–20 minutes. But once the game settles down and the intensity begins to drop, the midfield starts to get static. They don’t have the deep-lying playmaker to sit in front of the centre-backs and distribute the ball gradually upfield. As a result of this, most of their games tend to go low-scoring, unless they get individual brilliance from Cristiano Ronaldo and Paulo Dybala.

Miralem Pjanić isn’t capable of this role, and he is also 30. And so, their board is trying to make a double whammy to Barcelona by swapping him for Arthur. Clearly, the azulgranas will be the losers from this deal, as they will not only lose a talented player but also get an older one. And although Pjanić is a wonderful player, he doesn’t suit the Catalans profile.

Furthermore, Juve’s director Fabio Paratici says that both Arthur and Pjanić must be convinced to move the other way.

“We have spoken frequently with Barcelona, but at this moment all the teams are playing important games, so we preferred to bypass this period

It’s not about June 30, before or after, but about finding an agreement between the various parties, and both players have to be convinced. Therefore, it’s not an issue about dates”

Such a high profile source updating Sky Sports Italia on the situation is an indication that the Italian outfit has increased their interests. The likelihood of Juventus coming back with an improved offer is high. And it wouldn’t be surprising if Barça’s board decides to accept the offer with motives of funding the Lautaro Martínez deal or bringing Neymar Júnior back. At some point, Arthur might get the feeling that the club doesn’t value him as much as he loves them. And so, he might get convinced to move to Italy because of how interested they are.

The focus right now must definitely have to be on finishing the season on a high. Retaining the Spanish crown and then focusing on the Champions League must be the only agendas on Arthur’s mind. Juventus also have the Serie A and Champions League to focus on, so Pjanić must also only think about the issues on the pitch.

The fear that Arthur might get swayed by Juve’s project and the role he could be offered is evident. But at least momentarily, the best thing for both parties is to worry about their current clubs. The negotiations with the Old Lady can wait, and for now, Arthur must only keep his head in the game.