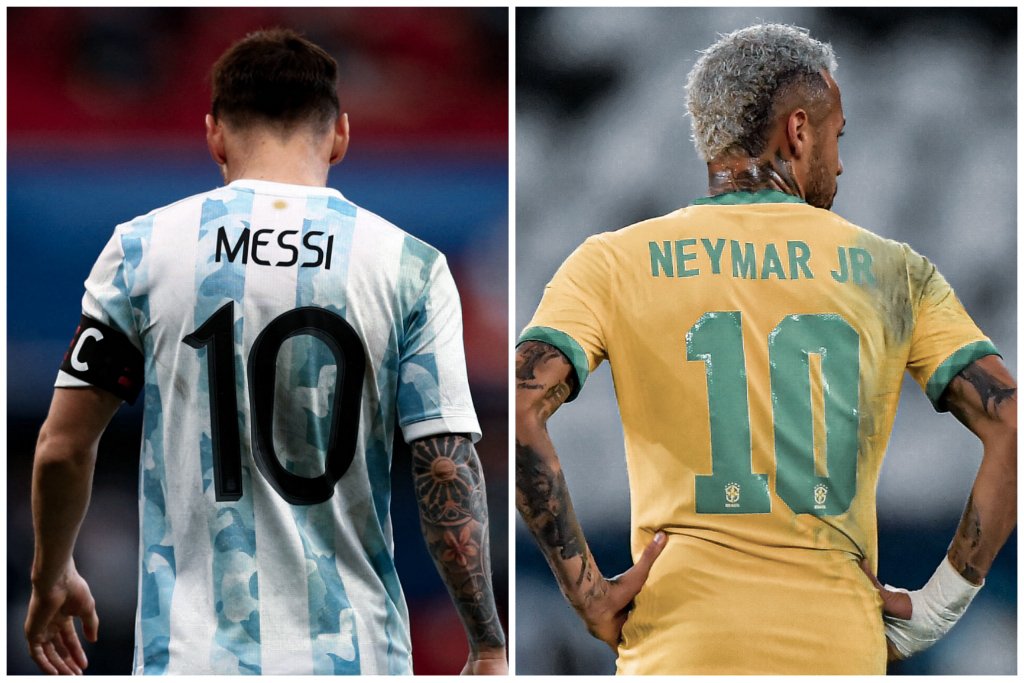 Tonight, Superclasico rivals Argentina and Brazil face off at the Maracana in Rio. The road to the final has been a daunting one for both sides. The hosts and defending champions overcame both 2016 champions Chile and 2019 finalists Peru in two tightly contested encounters. The Selecao just marginally scraped victories past both, en route to the grand final for the second time in four years.

The Albiceleste meanwhile breezed past Ecuador in the last eight, following it up with a penalty shootout victory over Colombia in the semifinals. Captain and record goalscorer Lionel Messi has had a hand in each of their four goals in the knockouts, while Aston Villa showstopper Emiliano Martinez’ heroics won them a spot in the final.

In what is inarguably the biggest rivalry in international football, there are bound to be few differences between the two South American giants and even fewer goals between them in the finale. In this article, Barça Universal explores three key battles that will determine the Copa winner.

Argentine international and Udinese captain Rodrigo de Paul has been one of the key cogs of Lionel Scaloni’s side. The midfielder plays predominantly as a right-sided interior in his club’s 3-5-2 and Argentina’s 4-3-3.

As a creative outlet, he drops deep to progress the ball from the midfield into the final third. Be it through a dribble or a pass, he can easily prove a menacing character in the right half-space for club and country. Additionally, he has an eye for goal and proved it vs Ecuador.

Casemiro needs no introduction. As one of the best in his role, the Brazilian has been instrumental for both Real Madrid and the national team. The Real Madrid number 14 had a good year individually for his club, netting six times and providing four assists. Against players such as Messi, he has proven on more than enough occasions that he is willing to raise the bar and take more risks defensively for the good of his side.

Given both will be face to face with one another in the same half-space, there are bound to be a few clashes between the two. Attacking prowess pitted against defensive resilience. Whoever emerges victorious in this duel puts their side one step closer to the ultimate prize; continental glory in the world’s oldest international tournament.

Emiliano Martinez vs Neymar and co.

“We have Emi, who is a phenomenon. We trusted him. We achieved the goal of being able to play all the games and now we are going to the final.”

These were the all inspiring words of captain Lionel Messi in regards to Aston Villa shot-stopper Emiliano Martinez. To say that Martinez has been important to Argentina would be an understatement. With him between the sticks, the Argentine defence has “permanent support”, as were the words of his manager Lionel Scaloni.

In testing times, such as the shootout victory against Colombia, he came up clutch with three consecutive sumptuous saves to put his side into the final of the continental showpiece. Now he finds himself up against Argentina’s biggest test yet: the eternal rival, Brazil.

Neymar has had a brilliant tournament from an individual perspective. Thus far, he has scored twice and provided three assists for his country en route to the final. Despite such statistics, Brazil is anything but a one-person team. The Selecao have scored 12 goals compared to Argentina’s 11 and have relied on a plethora of sources to get their goals. Lucas Paqueta netted in the quarters and semis in consecutive 1-0 wins for his side.

Threats on Martinez’ goal will come from all quarters, but the Argentine keeper has firmly stated that he will give his individual best to ensure that Lionel Messi and his nation get their hands on the long lost trophy. This being Neymar’s first Copa America final, he will equally look to get a taste of continental glory.

“Messi is, as I’ve always said, the best player I’ve ever seen play and he’s a great friend, but now we’re in a final, we’re rivals. I want to win and I really want to win this title, which would be my first Copa America.”

While Thiago Silva and Marquinhos have formed a solid defensive unit for the national team, conceding just twice throughout the tournament, this is easily one of the most dynamic duos imaginable.

Marquinhos possesses, as UCL-winning coach Thomas Tuchel puts it, “the skills needed to become a midfielder”. He can equally trek upfield and make necessary goalscoring exploits for both club and country.

As for his partner in defence, his astuteness makes him one of the most compelling defenders, even at 36 years of age. Keeping clean sheets is the least of their worries. Tonight, just like against Peru in 2019, the pair will be well aware of precisely what to do to halt the Albiceleste in their tracks.

Both Lionel Messi and Neymar Junior have been impressive for their respective sides, but when it comes to their sheer influence on their teams, Messi is simply a cut above everyone at the Copa America. Six matches, four goals, five assists, four Man of the Match awards, two free-kick goals, and much more brilliance in every other facet of his game displayed thus far.

For the Barcelona and Argentina captain, the Copa America final is a source of more than just silverware; it is a chance to right his wrongs of yesteryear. Messi has played four finals for his national team, and if not for a crude lack of luck, both on his and his teammates’ part, Argentina could easily have been one of the most trophy-laden teams of the past decade. At 34 years of age, there is still a chance that he might feature in the next edition of the Copa, but they are slim.

By 2024 he will be turning 37, and if he doesn’t emerge triumphant here, chances are that he possibly never will. His showings in the continental cup have demonstrated a desire, a hunger that has seldom been seen in his eyes. Such a chance at vindication simply cannot go to waste, and in the form, he is right now, the Albiceleste can be confident that their main man will take them all the way.

This battle will largely depend on just who wants it more. There is little doubt that Messi will be at the top of his game Saturday night. If the defensive duo make even the slightest of errors, then, by all means, the greatest footballer in history will make them pay.