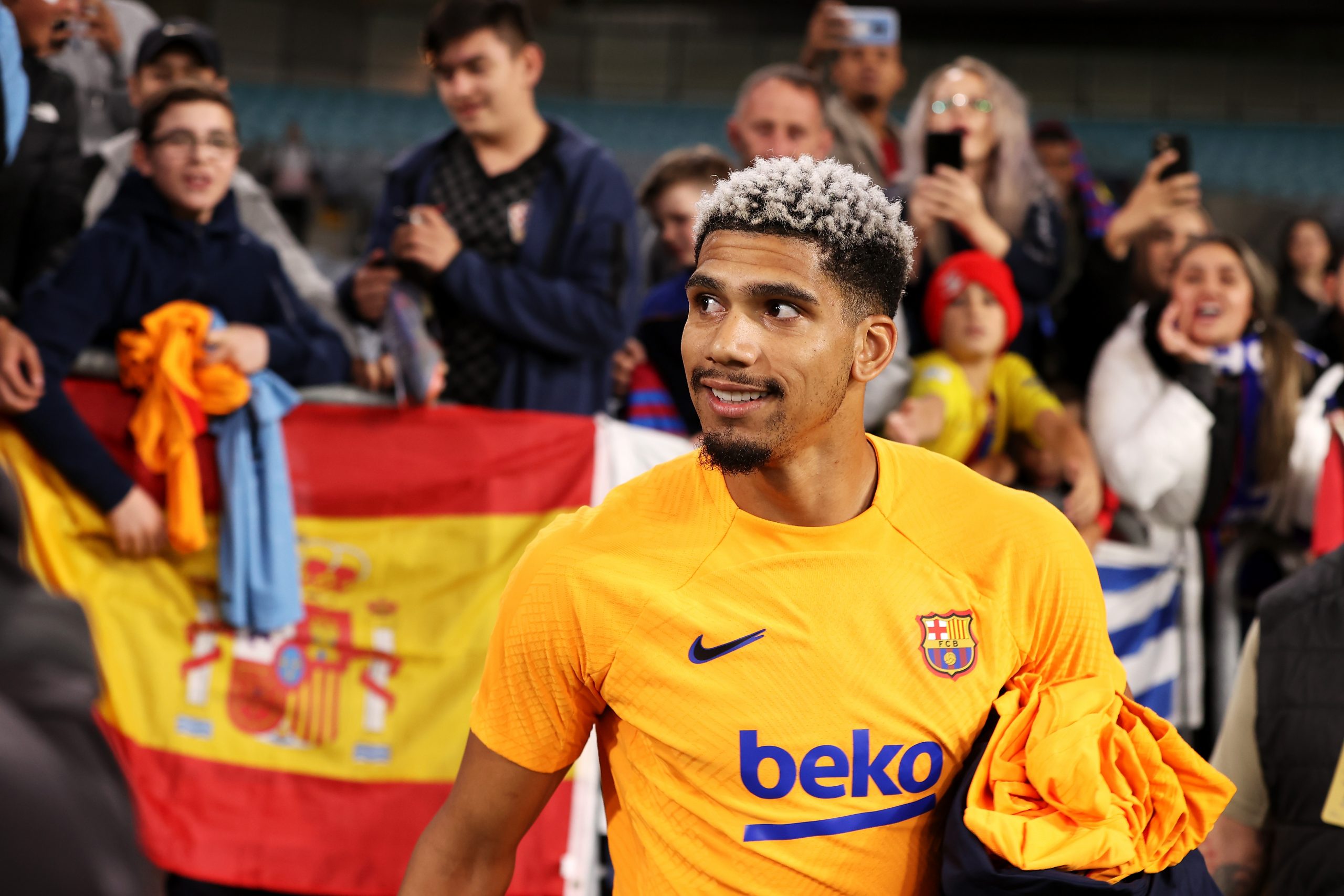 Barcelona endured a disappointing 2021/22 campaign during which they finished without a trophy.

A second-place finish in La Liga guarantees them a spot in the UEFA Champions League and the Spanish Supercup for next term. Considering where they were at the time when Ronald Koeman was sacked, it can be seen as a success but more is expected of a team of Barça’s calibre.

Despite the sombre season, there were some positives to emerge for the Catalans. The breakthrough of youngsters like Gavi and Nico Gonzalez was a major plus.

Another big positive for the Blaugrana was the evolution of Ronald Araujo from a prospect into a mainstay and a leader at the heart of the defence. The Uruguayan enjoyed a brilliant campaign on a personal level and established himself as one of the best defenders in La Liga.

The 23-year-old was also rewarded with a new contract for his exploits, with Barcelona ensuring that his long-term future at Camp Nou is secure.

Araujo sat down for an interview with Catalunya Radio, during which he discussed how his contract extension came about while admitting that he had more lucrative offers from elsewhere.

“I am very satisfied with the renewal. There were options around me, but I am the one who decides. We knew that there were very strong economic offers, but my intention has always been to stay at Barça,” Araujo said.

“There was a moment when the two parties came together, but there was no agreement. There were only two meetings and in the second one everything was closed.”

Araujo joined Barcelona in the summer of 2018 from Uruguayan club Boston River. It is no secret that former Barça technical secretary Ramon Planes had a huge hand in the transfer of the then-16-year-old prospect.

The centre-back spoke about how the transfer to Barcelona materialised, saying: “Ramon Planes is very important to me. When I arrived in Europe I was in a hotel in Madrid and I didn’t know who I was going to sign with.”

“When Barça’s proposal came to me, it was for the 2nd team, but I was very happy because it was Barça, the best decision I could have made.”

The 23-year-old also spoke about his time within the club and how it had helped him grow into a better player after some initial difficulties to adapt to the ways of Barça.

“As far as football is concerned, I’ve also learned a lot. I already saw that the way central defenders play here was different, and Barça’s philosophy is also unique. It was hard for me; people here start learning from the age of 10, and I was 16,” he said.

“I came to Barça at a very young age and it has helped me to learn and mature,” Araujo added.

Speaking about working under the tutelage of club legend Xavi Hernandez, Araujo said:

“I like watching videos and analyzing what I do. When Xavi came along, he had his own methodology for making individual videos, and when Xavi shows you things, everything is much clearer.”

As for his approach against strikers during matches, the Uruguayan added: “To anticipate, you have to be very confident. I analyze the strikers I have to defend and I see if I can anticipate. It varies between each player I have to face.”

Moving on to the future of this Barcelona team, Araujo claimed that he believed that the current squad has what it takes to achieve a lot of success in the coming years.

“I have full confidence in this team to win titles. We have to trust ourselves, the players we have, to believe that we can win. We have shown in the games of January and February that we can, to get to that level and go beyond,” the 23-year-old claimed.

The Barcelona defender also touched on the matter of Real Madrid’s failed attempt to sign Kylian Mbappe, saying: “Mbappe? We have to stay true to our ways, we are Barça, no matter which players go to Madrid. We know we have to go face them and win.”

The Uruguayan was also asked to compare Mbappe and Barcelona’s priority summer transfer target Robert Lewandowski, to which he replied:

“Lewandowski and Mbappe are two great players. We defenders prefer a bigger player, who is a reference, than a smaller one, but they are both great players.”

Moving on to the future of one of his teammates, Ousmane Dembele, whose contract expires next month, Araujo said: “Dembele knows what he has to do. We all hope he stays with us; he is a spectacular person, smiling, a player who can give a lot.”

Araujo was then asked if he can imagine himself playing in the Premier League in the future, to which he answered: “The truth is, no, my idea is, if God is willing, I want to stay my entire career here. You’ll see what the future holds, but that’s my idea.”

Talking about Uruguay’s qualification for the 2022 FIFA World Cup, he said: “I am very happy that Uruguay has qualified for the World Cup, hopefully we can do well in the World Cup.”