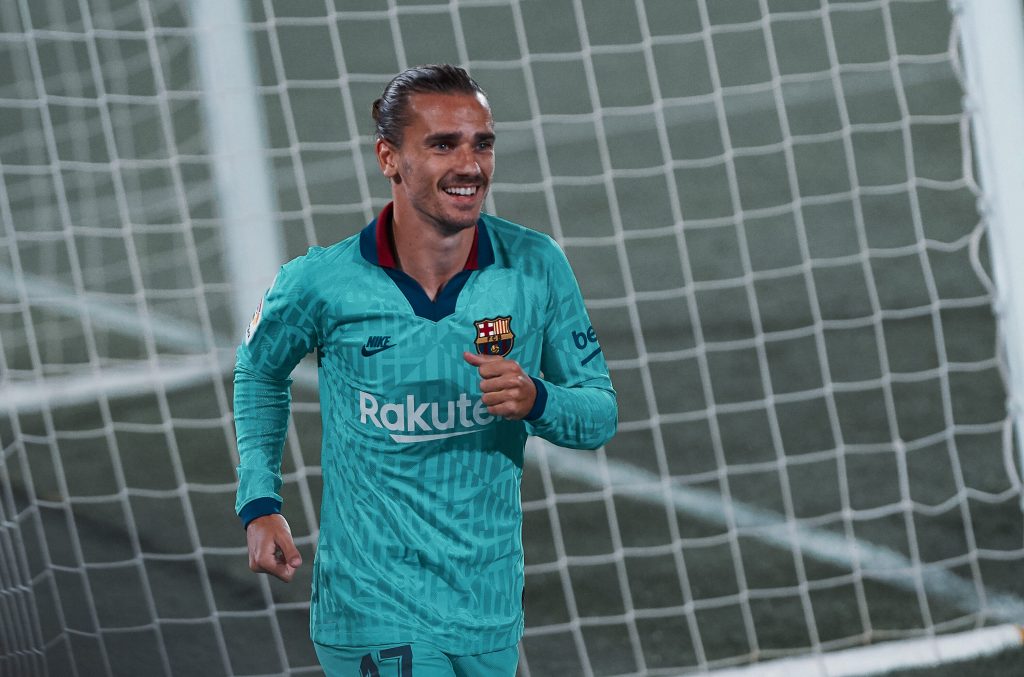 After a streak of matches without offering much, a new system by Quique Setién accommodated Griezmann into a new role. Antoine Griezmann was undoubtedly one of the best players of the match between Barcelona and Villarreal thanks to his contributions, intensity and fluid movements. The Frenchman is smiling again.

It took nine stormy games for Antoine Griezmann to score a goal again in La Liga. The entire world had had to witness one of the world’s best players unusually off. A recent world champion and top-three of the Ballon d’Or was completely sad. He no longer saw life in colour, but saw everything in a grey as cold as winter. From the outside, fans could see the face of a man trying again and again, but his position did not favour his game in any way, making all that talent vanish.

One of the most notable problems for Antoine was the difficulty of fitting in and playing alongside the likes of Lionel Messi and Luis Suárez in attack. There was no communication, and good football was not enjoyed. It was like seeing Messi and Suárez playing alone with a totally non-existent Griezmann. It was curious that one of the best performances from the former Atlético de Madrid man was against Real Betis back in August, in a 5–2 victory with Carles Pérez and Rafinha Alcântara flanking him. In that match, neither Messi nor Suárez were available. It had never been fruitful for Antoine Griezmann to be part of the so-called MSG trio, until Barcelona visited Villarreal on Sunday.

The reality is that nothing is forever, neither the good times nor the bad streaks. Fortunately, coach Quique Setién had the vision to take the risk to do an unusual experiment for Barça. After using the famous 4–3–3 for multiple games, Setién already made an adjustment in the encounter with Atlético de Madrid, in which he used a diamond-shaped 4–4–2. Facing Villarreal on the weekend, the manager opted for a similar system, a 4–3–1–2. The starting line-up was highly questioned at first, but it contained the right players to most out of such formation. And, of course, this approach helped the entire team, but Griezmann was the most benefited footballer, along with Lionel Messi.

The role of the little prince was to play in the centre, closer to where the action takes place, participating and contributing more. When Griezmann is active in the build-up, wonderful things happen. This position also allowed him to move more freely since he knows it perfectly for his time under Didier Deschamps in the France national team and, obviously, with Diego Pablo Simeone at Atleti. However, against Villarreal was the first time in Barcelona that Antoine Griezmann played in that zone of the pitch that he likes so much.

In defence, Antoine exchanged his position with Messi so that the Frenchman could help stop the counter-attacks from the Yellow Submarine, always with intensity and intelligence. When the team recovered the ball, it was the number 17 who was mobile in the final third and offered smart off-ball runs. Despite playing in the areas where Messi often operates, this was not an obstacle. Both superstars partnered up brilliantly and circulated the ball with great ease, speed and elegance.

Antoine Griezmann, whose joy seemed to have faded at Barcelona, finally smiled again against Villarreal | Photo by José Jordán / AFP via Getty Images

Despite Griezmann’s good game, a goal was needed to seal that superb display. The ex-Atlético man indirectly participated in the azulgranas‘ first goal, which was an own goal by Pau Torres. Antoine did not touch the ball, but his movement and intentions caused the mistake by Pau after a cross by Jordi Alba.

Attempt after attempt, the player went from less to more. A couple of minutes before half-time, the 29-year-old dressed up to became an artist and transform his work of genius into a perfect goal. As if Messi had passed the magic to the Frenchman, Griezmann chipped the ball from outside the box over Sergio Asenjo, in a goal that was reminiscent of that Leo had scored against Betis in March 2019.

Everything about the goal on Sunday was poetic. Messi carried the ball towards the opposing area with two defenders chasing him. When everyone thought he was preparing to shoot, the Argentinian’s magnificent instinct was exhibited as he backheeled it to Griezmann, who was offering himself in behind. With calm and astuteness, Antoine applied the necessary strength and direction to the ball to work his magic and surprise the entire rival team with a stunning goal.

This is how Griezmann finally smiled and danced again. How satisfying it is for fans to see him so happy displaying all the talent and virtues that he possesses. If el Principito will continue to share minutes with Messi in the following matches, this has to be the approach. In the end, at Villarreal, in what arguably was his best game for Barcelona, Antoine reminded the football world who Griezmann is: one of the best players in the world.

Hopefully, this exhibition will be a motivation for the player to recognise that he can still shine in Catalonia. Supporters will have wait for the upcoming games to see how he develops, but the feelings are totally positive. For now, it is safe to say that Monsieur Griezmann is truly back in Barcelona.