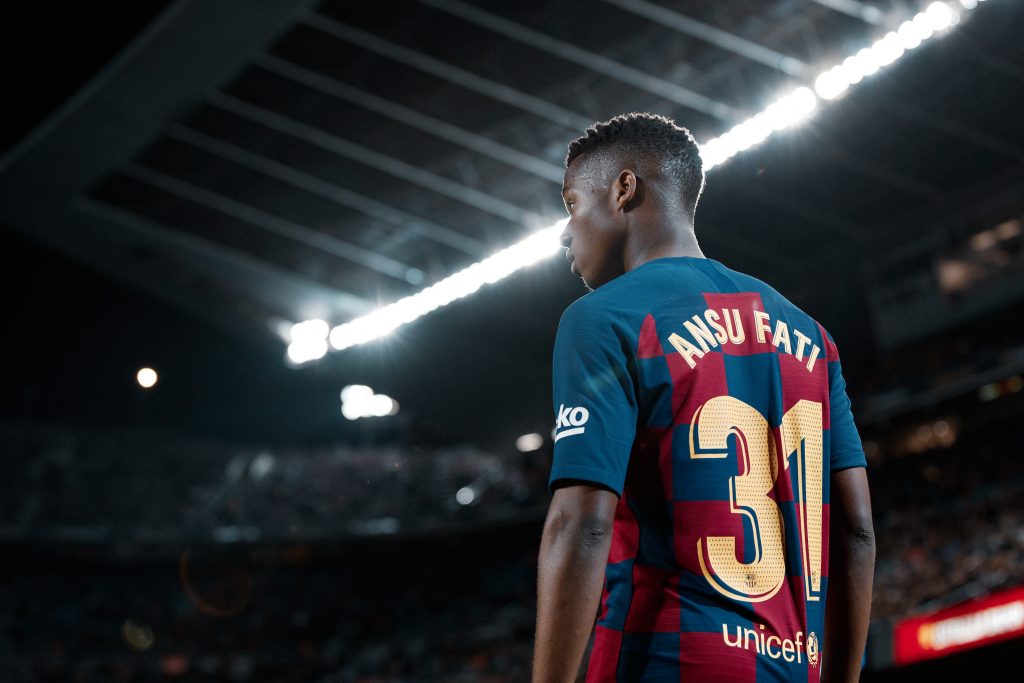 Two products from La Masía that, at such a young age, are the solution to the tactical and intensity problems Barça are facing. For the Catalans to win La Liga, many things are needed, but Ansu Fati and Riqui Puig are one of them.

Barcelona has been filled with problems this season. The accumulation of all of them has led to, in the league, being behind leaders Real Madrid. Nevertheless, with both sides tied in points and with Los Blancos holding the head-to-head advantage, there is still hope for culés. In particular, some hope that is brought by the countless stars in such a gifted squad, but also by the promise of several gems that get fans excited. Among others, it is two La Masía youngsters who could turn the title race upside down during these upcoming weeks.

On the one hand, there is 17-year-old Ansu Fati, operating in the winger role. A position that is currently in decline in Barcelona, with Ousmane Dembélé injured. And, although many can play there, few can interpret the spaces properly and stay in such a wide area other than the sensation Ansu himself.

On the other hand, Riqui Puig adds verticality and energy to the team from midfield. The one similarity between him and Fati is that both offer something that the club is currently lacking: a spark of imagination, personality and intensity. Ansu Fati already showed it against Leganés, where he scored the opener, and as a substitute against Athletic Club. Puig shone in both games as well, but only coming off the bench. If Barça wants to have a better chance of winning the rest of the clashes, though, both Riqui Puig and Ansu Fati must be essential.

Winger, a position that seems simple but which requires a lot of tactical work and patience. With Ousmane Dembélé’s injury, Barcelona have been left depleted of options in that zone. Players like Martin Braithwaite, Antoine Griezmann or even Arturo Vidal have been utilised in that area, but for more individual quality that they have, it takes something else to be functional in that position. Maybe Braithwaite is more productive there than his other two teammates, but the one winger that is ideal there has name and surname: Anssumane Fati.

The role of the winger is too important for Quique Setién’s tactics. A creative winger, with vision, good with the ball at his feet, with the ability to read and generate spaces, with energetic movements with and without a ball, measuring distances well, and constantly making runs in behind to destabilise the opposing defence and open up gaps. All this while staying close to the touchline. Ansu Fati is the only player in the squad suitable to acting as a winger, given his characteristics as he is capable of fulfilling all these tasks.

Young but ready | Photo by Aitor Alcalde via Getty Images

Against Leganés, he did not participate much in the build-ups because he was always covered by many defenders. Even so, when he had the ball he participated in a positive way and, when he did not have the ball, he positioned himself very well to provide width and stretch the compact defence of Lega. In a complicated duel and without enjoying many opportunities, Fati had his first chance, in which he made a magnificent control surrounded by several defenders and, in a matter of seconds, found the net to open the scoring.

Against Athletic Club, he was subbed on in the second half and gave life to Barça’s attack, as he almost always does. He had a big opportunity in the final minutes, unfortunately hitting the post.

Riqui Puig, the artist that Barça needs to make poetry on the pitch

The blaugranas have several issues in midfield. Frenkie de Jong is injured, Arthur Melo is out of form and focus with the rumours linking him to Juventus, and Arturo Vidal is not at the level that is expected from him. By contrast, Riqui Puig is ready to shine. Intentional, he is always looking for key passes to his partners. Off the ball, he moves very quickly from one side to the other to offer a passing lane and continue circulating the ball. In defence, he presses with great intensity and intelligence, despite not seeming much physical. And, unlike the other midfielders, Puig offers the verticality that no one else is giving at the moment.

A week ago Riqui Puig played 20 minutes against Leganés and was very involved. In spite of the few minutes he enjoyed, he had two dangerous chances in which he almost scored, as well as generating a couple more for his teammates. Against Sevilla, he played roughly eight minutes and logically had no time to demonstrate anything. However, in the last fixture against Athletic Club, Riqui was handed most of the minutes in the second half, being the player who made a difference during the game.

“Im very happy that I’ve gained the confidence of the coach. It was a match in strange conditions; you could hear the firecrackers…It was a good result and I can’t complain”

Riqui Puig
after the win against Athletic Club

The meeting with Los Leones separated into two. Before Puig and After Puig. Before Puig, the play was slow and conservative, without creativity or much threat. After Puig, it was the opposite. The Catalan has a privileged mind and physique, having an admirable agility and pressing as if it were the 90th minute of the most important final of any player’s career.

Riqui sent lethal passes to his teammates, solving the problems in attack that the team was having. A 20-year-old changed Barcelona’s game in a side with great names such as Arturo Vidal, Antoine Griezmann, Jordi Alba and Luis Suárez, among others. And, although Puig is not better than most of these individuals, he is the one who impacted the match the most.

What do Ansu Fati and Riqui Puig need from Barça?

Ansu Fati and Riqui Puig already offer many things to Barça. But now, what should the blaugranas offer both La Masía products? Simple: minutes and confidence.

We are all aware of what they are capable of. We meaning fans, teammates, the board, Quique Setién and even the two players themselves. There is no doubt that the air breathed when both are playing is full of purity and life. That said, there is always hesitation when it comes to giving them minutes. Why?

The two prospects are already doing their job, and now it is Barcelona that must do its. The problems are multiple: injuries, poor performances at the centre of the pitch, absence of width, problems to deliver the final ball, lack of imagination and vitality…Numerous troubles for the Catalans, yet the two academy graduates can be the key to unlocking the lock that has the club stuck and is preventing it from moving forward.

Quique Setién has to start both Riqui Puig and Ansu Fati in most of the remaining seven games in La Liga. Or, at least, one of them. Not to necessarily win La Liga, as for that to happen Real Madrid has to drop points. Notwithstanding, Barça will definitely have a better chance of lifting the trophy with both gems on the pitch.