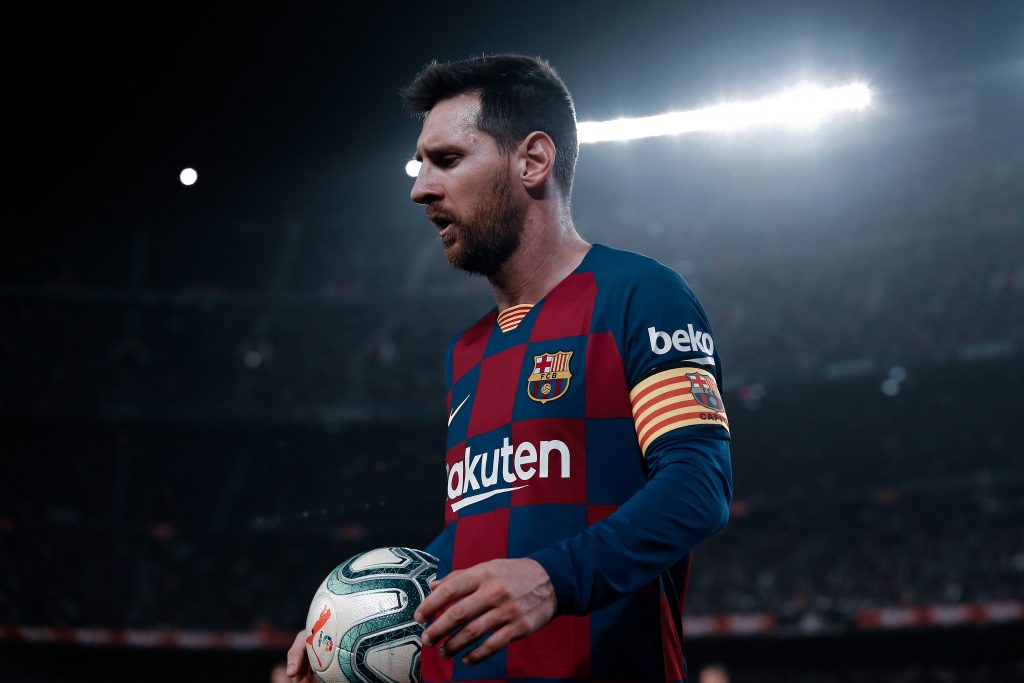 Against Atlético de Madrid, Lionel Messi reached the milestone of 700 goals in his career. A figure that he achieved in 862 matches as a professional. The Argentine did it with elegance and a panenka goal from the penalty spot against Jan Oblak.

Lionel Messi is synonymous with perfection. How he passes the ball, how he shoots, how he dribbles, how he runs. Every single movement of the Argentine is beauty and each of his goals is pure art. Art that Leo Messi has been hanging little by little in a museum that now holds 700 pieces. As a good artist, consistency is important, and Messi has been working season after season until achieving this figure in 15 years and countless matches.

After debuting at the age of 16 on 16 November 2003 under coach Frank Rijkaard against Porto in a friendly, a young and ambitious Leo Messi would have his first full campaign in the 2004/05. While the Argentinian only enjoyed nine games, he had to share the dressing room with the team’s leaders at the time, Carles Puyol, Ronaldinho Gaúcho, Deco and Samuel Eto’o, as well as with Xavi Hernández and Andrés Iniesta.

While Messi is perfection, his goals are too. On 1 May 2005, Barcelona hosted Albacete at the Camp Nou. With an advantage of one goal thanks to Eto’o, Barça was on the verge of obtaining the three points. However, one more goal killed off the match and ensured the victory for the locals. With three minutes left of regular time, Messi had been subbed on to replace Samuel. A few seconds were enough for Leo to transform into a magician.

With the number 30 on his back, Messi received a pass that was difficult to control with his head. Even so, in the final third and at a very young age, Lionel already made the best decision. Instead of fighting against the opponent, the Argentine controlled the ball with his head and passed it back to Ronaldinho. One step back to make two forward. Dinho, another artist with the ball, had a telepathic connection with Messi as he already knew what the teenager was going to do. Thus, the young Leo ran forward as soon as he released the ball, and the Brazilian delivered a perfect pass in return over the head of the defence.

The rival goalkeeper was well-positioned, in an intermediate position between Leo and his own goal. So what would any other player have done in that situation? Maybe wait for a cross or strike a low shot. But let’s remember that Leo does everything to perfection. La Pulga kept his calm, waited for the ball to bounce on the floor, and then scored a goal in exactly the same way as Ronaldinho’s pass: with a delicate flick. A perfectly executed shot, with the right strength, direction and angle. Everything was perfect.

“He is the best player I have ever seen. The best thing about him is not what he does but how simple he makes everything look. He is not just the best player because he can dribble past three or four players, it is because he does it better than anyone in the world”

From there perfection never stopped, as Messi began increasing his numbers year after year. He kicked off with his goal number one against Albacete but, soon after, he already started achieving other milestones. His 100th goal against Dinamo Kyiv in 2009. Just two years later, his 200th against Real Madrid. In the following year, number 300 against Rayo Vallecano. The 400th while facing Granada in 2014. His goal 500 against Valencia in 2016. Then, his 600th in 2018 against Atlético de Madrid with an amazing free-kick. And, yesterday, Lionel Messi rounded off his 700 career goals against Los Colchoneros too.

All of these goals had the same recipe. Each and every one of them was a golazo. Free-kicks, slaloms in which he left all defenders behind, strikes from outside the box, after having dribbled past the goalkeeper, with a header or volley, or, as last night, with a panenka penalty shot. And he never stops. Messi only has one way of doing things and he always tries to find the best solution, regardless of how complicated it may be. But it doesn’t matter, as on every occasion he manages to find it in the simplest way possible.

With class and delicacy, Messi transformed a penalty into another piece of art | Photo by David Ramos via Getty Images

The 700 career goals from Lionel Messi are split between 630 for Barcelona, and 70 with the Argentinian national team. Leo has as his favourite victims top clubs such as Sevilla, having scored 37 goals against them; Atlético Madrid, with 32; Valencia, 28; and Real Madrid, 26. But the little genius has scored goals against an almost infinite number of teams, thus achieving a magnificent figure of 0.81 goals per game. In other words, statistically, Leo has an 81% chance of scoring in any given match.

Messi scored his 700th goal on 30 June 30 2020, at a time when the world has gone through many difficulties due to the COVID–19 pandemic. Still, La Liga was back and Lionel was able to accomplish his feat. Fighting for La Liga title and with a 1–1 draw on the scoreboard against Atlético de Madrid, Barcelona got a penalty early in the second half. Facing Jan Oblak, considered one of the best goalkeepers in the world, against an opponent like Atleti and with a competition at risk, Messi surprised everyone once again. With all the pressure to get the points, the Argentine transformed the complicated into an easy task. That’s how he scored his goal with panenka-style elegance.

As a consequence, the blaugrana legend joined the memorable and successful club of the 700. This includes names like Cristiano Ronaldo, Ferenc Puskás, Pelé, Romário de Souza or Josef Bican, who holds the record with 805 goals. Just like Lionel Messi has broken countless records before, he will most likely break this one too. Sooner or later, Leo will once again overcome the insurmountable. Because Messi, beyond being perfect and the best player in history, is also the same child from Rosario who continues to fulfil his dream of reaching new goals.