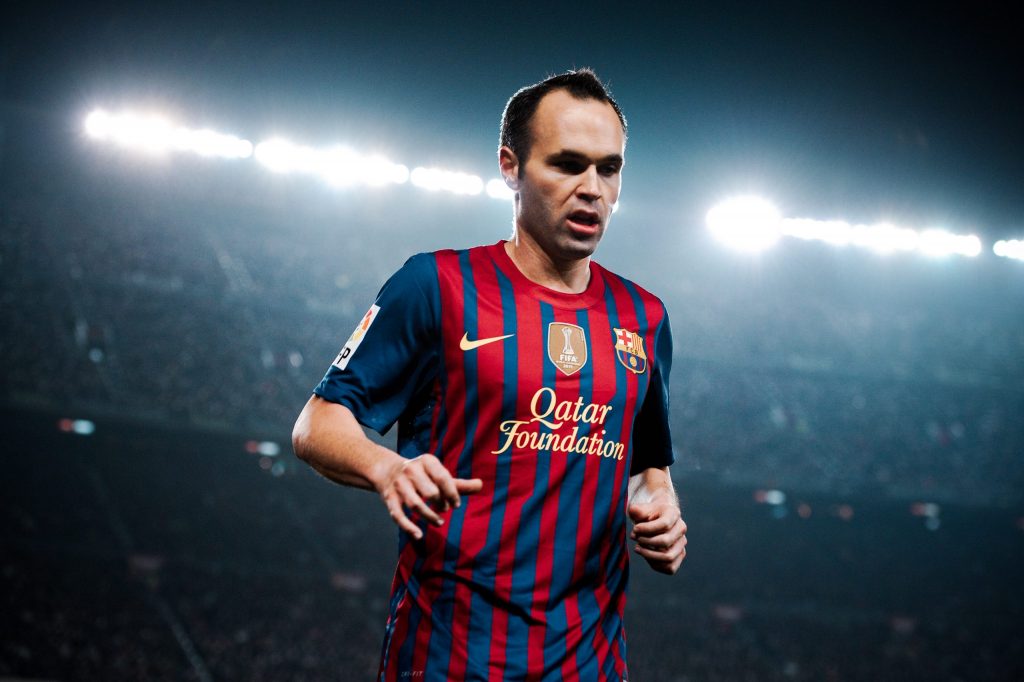 La Masía has produced many great players over the years. Few have been as influential as the poetic legend that is Andrés Iniesta. He is the epitome of what a Barcelona player should be. Every footballer should look up to him, not only for his footballing genius, but how he conducted himself on and off the pitch.

Andrés Iniesta is best remembered for his time at Barcelona. He was quiet by nature but always had such an impact on the game of football. Like Xavi, Andrés helped to redefine the role of a midfielder. Being smaller in stature was never an issue, and Iniesta always played to his strengths. Technically, there has never been a better player with the ball. His incredible dribbling and eye for a pass made him one of the world’s best. Although not renowned for his goal scoring ability, many of his goals were in crucial games. Don Andrés’ career had some difficult moments, but he always remained honest and level headed. His brilliance never faded and his legacy will be forever remembered by everyone associated with FC Barcelona.

Born in the small village of Fuentealbilla, Andrés Iniesta came from humble beginnings. He started to attract attention at the age of 12 while playing for Albacete Balompié. At a tournament, he was scouted by Barcelona and was convinced to join La Masía. It was a tough decision for the young Andrés as he was very shy and initially struggled moving away from home. However, this did not stop Iniesta progressing through the age groups. At 15 he was captain of his team and led them to win the Nike Premier Cup in 1999. He scored the winning goal in the final and was named player of the tournament. Scoring important goals would become a recurring theme throughout the career of El Ilusionista.

“You will retire me, but this kid [Iniesta] will retire us both”
–– Pep Guardiola to Xavi

At just the age of 18, Andrés Iniesta made his debut for Barcelona in 2002. His talent was quickly recognised and he grew into the first team, at a steady pace. During his earlier years, the blaugranas had a competitive squad with many established midfielders. This did not stop Iniesta from getting game time though. In the 2004/05 season, a young Andrés was the most use player in La Liga for Barça. He featured in 37 out of the 38 league games, although often as a substitute. His profile continued to rise as he cemented a starting position with the team. His versatility to play in a number of roles was also a great asset. This highlighted the natural talent and understanding of the game that Don Andrés possessed.

At the start of the 2007/08 campaign, Iniesta was given the number 8 jersey. This would go on to be one of the most iconic Barcelona shirts in history. The next season he was chosen as the fourth choice captain at the club. This really marked the transition of Andrés being a consistently great player, to a world class player. He became an undisputed starter for the club and along with Xavi and Busquets, formed the greatest midfield in football. At times these 3 were untouchable and dominated teams. Their peak lasted for a number of years and is looked upon as one, if not the best, footballing side ever. Iniesta continued to play for Barcelona until 2018. He played a total of 674 times for the club, scoring on 57 occasions and assisting 140 goals.

“He’s fantastic. He makes the team work. The way he finds passes, his movement and ability to create space is incredible. He’s so important for Barcelona”
–– Sir Alex Ferguson, on Andrés Iniesta

There are many memorable moments in the career of Andrés Iniesta. His greatest moment, without a doubt, came for Spain in the 2010 World Cup. After a gruelling game against the Netherlands, the match was decided by Iniesta in the 116th minute. He dedicated his goal to his friend Dani Jarque, who had sadly passed away. Another of his incredible moments came against Chelsea where El Ilusionista sent Barcelona to the final, with a late winner. Barҫa would go on to win the final with Iniesta providing an assist for the first goal. In addition, his man of the match performance in the Champions League Final in 2015 helped secure Barcelona a historic second European treble. That season he became only the 3rd Barça player to receive a standing ovation at the Santiago Bernabéu, after a goal and assist in a 4-0 victory.

“If you win without sacrifice you enjoy it, but it’s more satisfying when you have struggled”
–– Andrés Iniesta

From his humble beginnings to the World Cup winning goal in 2010, the career of Iniesta is one of the greatest in footballing history. He began as a shy boy, reluctant to leave home, to captaining Barcelona and winning 35 major trophies. He is the perfect role model for any aspiring football player. His technical ability with the ball is almost unrivalled and his vision, passing and dribbling helped make him a world class player. A big game player, Andrés would always be there when the team needed him most. The idea of Barcelona, or any team, trying to look for the next Iniesta is pointless. There will never be another like him. Infinite Iniesta.

Xavi Hernández: How to play midfield
What did you think of this article?