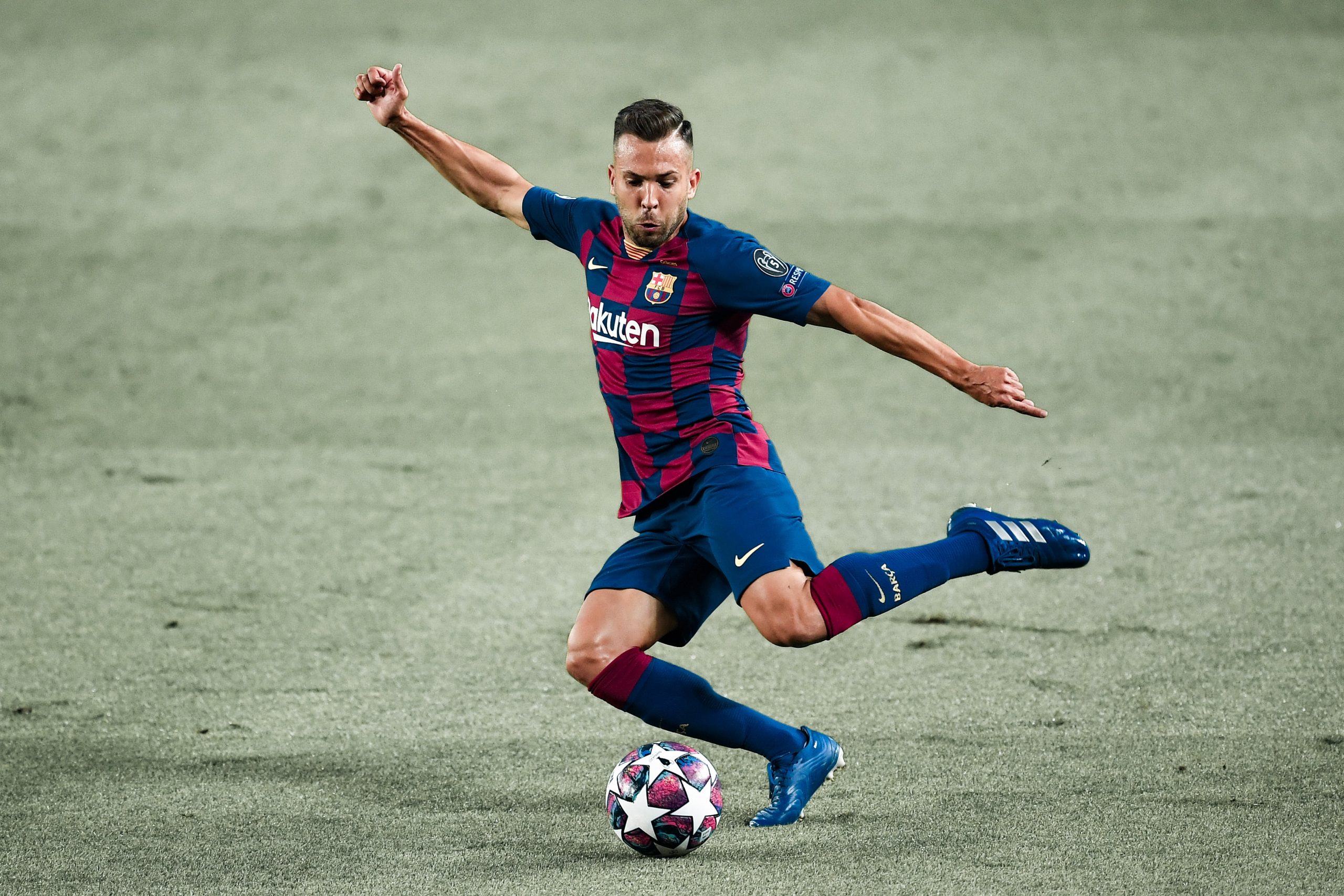 On the 22nd of June in the year 2012 Barcelona re-signed once one of their own, Valencia speedster, Jordi Alba, for 14 million Euros. Once part of the club after coming through the esteemed La Masia academy, he was to replace Eric Abidal, the French left-back who had given much to Barcelona over the years but his unfortunate health problems meant it was the need of the hour to move onwards. Fast forward 8 years and a massive 335 appearances for the Blaugranas, the man who was initially dismissed as ‘too short’ by the Catalan club stands as a gargantuan figure who made the left-hand side his own.

It is unpropitious for Barcelona that time cannot be rolled back, because if they could, they would definitely look no further than the little man they signed in 2012 to fix their current concerns at left-back. As things stand, however, Alba is 31 and clearly regressing as each season passes. While he still has an excellent command on his attacking skill, it’s the defensive issues faced by him and the other fullbacks that puts the team in hot water consistently. Moreover, one of the key aspects to his game is the pace and acceleration he brought near the touchline, and that is one area that is bound to regress with age. It is, therefore, the correct time to look for a replacement for the Spaniard; otherwise, the Blaugranas risk being set back a few years as happened with replacing Dani Alves.

This train of thought was what Barcelona had in mind when they signed Junior Firpo from Real Betis in August 2019. He was, at that point, a highly well-regarded prospect in La Liga, with several teams including Real Madrid and Manchester City posing interest in the Dominican. However, Firpo’s attacking threat was nowhere close to the Spaniard. In the 17 appearances he did make, Junior Firpo had a low xA (Expected Assists) of 0.06 per 90 last season as compared to Alba’s 0.14 per 90. Additionally, he had 3.71 passes into the final third per 90 as compared to Alba’s 4.75. Finally, Firpo was never able to recreate the kind of understanding Alba had with team captain Lionel Messi which made the duo lethal. The young left-back never makes the same runs into the box as Alba and the Argentinian is often left wanting more in that regard.

Junior Firpo, at the moment, simply does not match up to Jordi Alba at all.

Defensively speaking, Firpo did attempt more tackles than the Spanish veteran – 2.12 tackles per 90 as compared to Alba’s 1.03 per 90 in 19/20, but it is often due to necessity as he is caught out of position very often. This trickles down to the fouls, which stand at 3.1 fouls per 90 for 24-year-old, as compared to Alba’s 0.74. Consequently, Firpo picked up 5 yellow cards while Alba picked up 7 in a little more than double the starts, indicating a lack of discipline in Firpo’s case. The duo is similar with regards to successful pressures, as Alba had 2.8 successful pressures per 90 last season and Firpo had 2.65 for the same.

For what it is worth, Firpo does bring a touch of aerial dominance into the picture, but that is hardly a requirement for the left-back of a team like Barcelona. The youngster’s growth has stagnated over the season, and he showed no signs of adaptability when it came to moving from a 5 at the back system at Betis to a flat 4 at Barcelona. Maybe with time, Junior Firpo becomes an able replacement, but with multiple players past their peaks, including long time mainstays Sergio Busquets and Gerard Pique who have been so crucial to the Blaugrana’s defensive system, Barcelona must bring in a fresh face. Someone who can fill the massive shoes of Alba quickly. We, at Barca Universal, therefore, look at 3 possible replacements for the Spaniard who can complete the Blaugrana’s search in that position.

A name Barca connoisseurs will be familiar with, Alex Grimaldo is also from the once-famed La Masia, and was one of the highly touted prospects before he chose to move to Benfica, eyeing the possibility of more playing time since Alba had a tight hold of that spot at Barcelona. Now that Alba is ageing, it might be time to dive in for another trusted La Masia prospect who will know the workings of the club from his academy days.

Grimaldo is a short and lean player, with a boosted acceleration – a profile very similar to that of Alba. Often used as a midfielder in his earlier days, he has the decision making and a great handle on what to do when he has possession of the ball, which is a massive bonus for a team like the possession hungry Catalans. He has a tremendous attacking output and is genuinely fearless, something Firpo is clearly lacking. The 24-year-old Spaniard has racked 22 assists in 88 games in the Primeira Liga and is one of the top fullbacks in the league. His xA per 90 stood at 0.21 as compared to Alba’s 0.14 last season, and he also led the numbers for tackles, making 2.34 successful tackles per 90 as compared to Alba’s 0.58. When it comes to passing, Grimaldo completed 83% of his passes last season, whereas Alba made his passes at a completion rate of 87.1%.

While Grimaldo is short in stature and teams often look to go over him, he still has the positioning to make up for the same and has the pace to make up ground if he falters. Something prime Alba can massive relate to.

The red and blue of Barcelona owes a lot to the red and white of Amsterdam. From players like Johann Cruyff and Jari Litmanen to more recently, Luis Suarez and Frenkie de Jong, there have been a plethora of players who have represented both the clubs. Now that Barcelona have been looking to offload the regressing Suarez, Nicolas Tagliafico could turn out be an interesting option to entice Ajax for a swap deal.

The Argentine left-back moved from Independiente in 2018 and has since appeared 65 times for Ajax. While he is not as much of an attacking threat (8 assists in 2 seasons), the 28-year-old does give Barcelona something they desperately need in their current predicament – defensive solidity. Compared to Alba’s 25 tackles attempted in the 19/20 season, Tagliafico attempted almost four times that number (96) and successfully completing 61 of them, compared to Alba’s 14. He was also able to block 10 shots compared to Alba’s 5.

However, the defensive side of the game is not all he provides. He is solid while in possession as well, completing 86% of his passes, and playingi in one key pass every game. He also created seven big chances last season, of which only four were converted. Tagliafico stands at a modest 5’7”, but he does have the lung-bursting stamina in him, which will be a criterion to consider while replacing Alba. In buying Tagliafico, Barcelona could potentially look to employ something their Blanco rivals in Madrid successfully did after buying Ferland Mendy – plug the defensive errors from the wings and solidify the defence as a whole.

Barcelona looked towards Valencia in 2012, and maybe the solution lies there in 2020 as well. Jose Gaya has been one of the most highly-rated left-backs in La Liga for years. Despite, that, he is only 25 years old, but has already racked up 144 appearances for the club. With Valencia having a fire sale, it would be the perfect time for the Blaugranas to target their academy graduate.

Gaya is a very attacking fullback who tends to occupy areas on the left-hand side byline a lot. He is an outstanding crosser and attempted 3.08 crosses per game in the 19/20 season. He had a total of 939 touches in the mid and final third combined, showing his tendency to push up in the opposition half and receive the ball high up the pitch. If he loses the ball, Gaya has the electric pace that can help him catch up with opponents quickly. He is not afraid to complete a challenge and is hard to take on, given his short, but robustly built. Gaya was one of the standout players in what was a rather disappointing season for Valencia, and Barcelona should grab the chance to buy him with both hands, especially after his excellent display against them in La Liga this season.