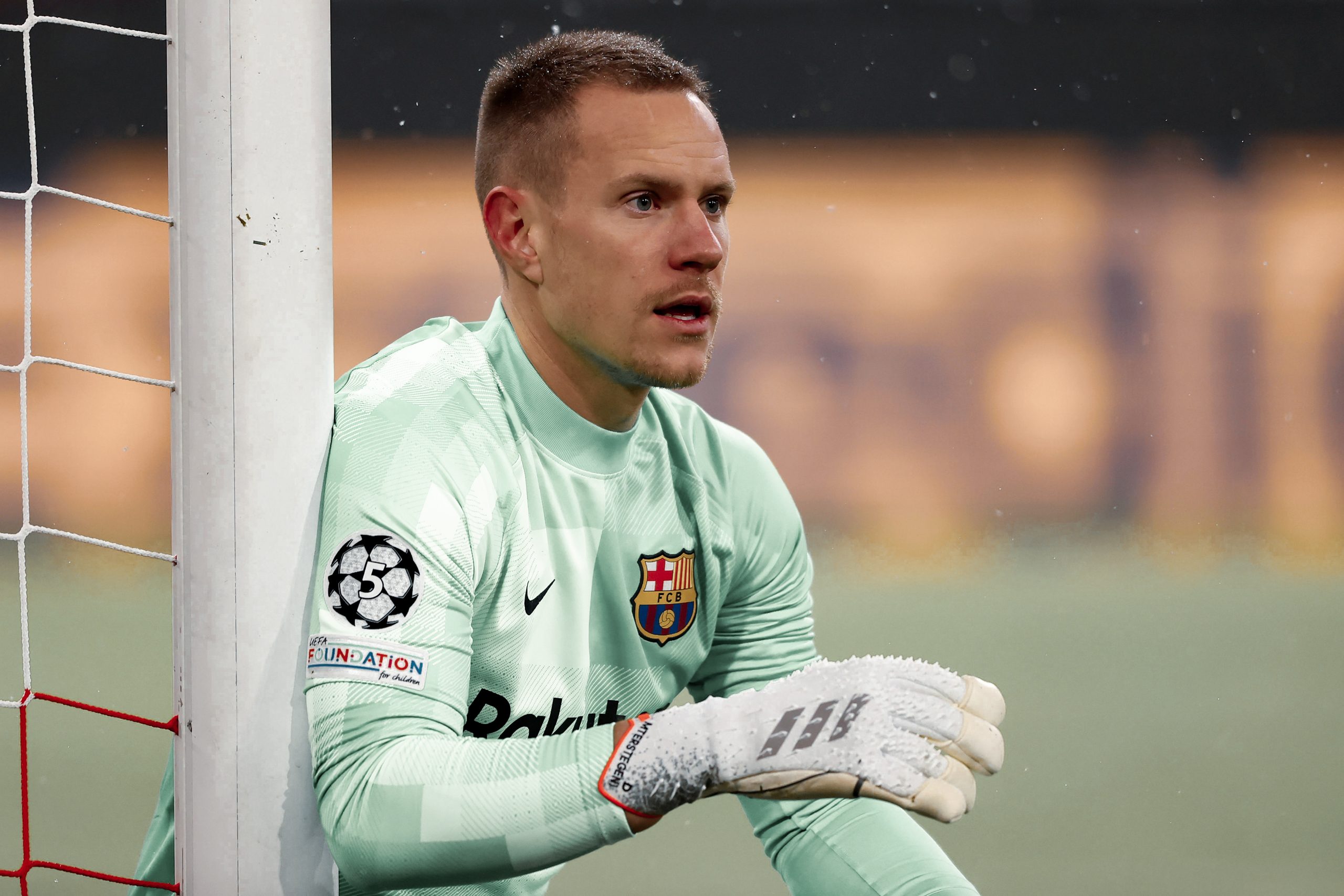 After Marc-Andre ter Stegen underwent knee surgery in May, 2021, there was hope that he would be able to recover some of his world-class form. However, in the 2021/22 campaign, almost all aspects of the German’s play have undergone further decline.

Unfortunately, ter Stegen’s performance has simply not been on par with the club’s expectations. With that in mind, the calls of fans and analysts for a replacement have certainly been justified.

It is important to remember, though, that Barça’s desired style requires a certain type of profile. More than other positions, it can be easy to discard goalkeepers as all cut from the same cloth, which could not be further from the truth.

Let us run through a group of candidates who could fulfil most of the required responsibilities that the club should be keeping an eye on.

Where is a great place to start looking for players who suit an established style of play? Well, especially for Barça, the youth academy. Inaki Pena may have graduated from La Masia at this point, but he spent years there learning the principles of goalkeeping in a possession-based side and moving up the ranks.

If the club want to save funds and experiment with a low-risk alternative, next season could finally see Pena get his chance with the first team. The Spaniard is currently out on loan at Galatasaray, where he is managed by former Pep Guardiola assistant Domenec Torrent.

Torrent certainly believes the keeper will be back at the Camp Nou in 2022/23, stating, “The reason why there is talk of six months is that Barcelona needs him next season.” He also revealed that, “Many offers came from La Liga and Barcelona rejected them all.”

For the 23-year-old keeper, a lack of first-team appearances and hype around his name reflects the fact that he is not viewed as a supreme talent. However, looking at his profile, it is clear why he might get a chance.

The Spaniard is very solid with the ball at his feet. A certain trust from his teammates at Galatasaray and in recent seasons with Barcelona B is apparent. Pena makes himself an outlet when the side needs to recycle possession and is comfortable, not rushed when receiving a pass.

From there, he has a solid repertoire of short combination with the centre backs, passes into the feet of a dropping centre midfielder, and the occasional ball driven into the centre forward.

Pena does not quite have the same pinpoint accuracy or speed of delivery on “clipped” passes as ter Stegen, though, which can be crucial for going “over” the opposition press.

There is not much data or much sample size, in general, to gauge the Spaniard’s shot-stopping at the top level. He definitely does not stand out athletically, too. This makes Pena a bit scarier of an option from the outside, but hopefully, the club will be able to judge his abilities well internally.

Verdict: Unlikely to be a star for Barça, but do not count him out. Could possibly be turned to even just for short-term cover.

Most do not think of immense physical stature when it comes to Barça goalkeepers, with ter Stegen (189 cm tall) and Peña (184 cm) being good examples. Nonetheless, Brighton’s Robert Sanchez – standing at a height of 197 cm – partners that traditional goalkeeper size and command with all the necessary technical ability.

Manager Graham Potter has made Brighton one of the Premier League’s most possession-dominant sides, and Sanchez plays a big role in this. So far this season, Liverpool’s Alisson is the only starting goalkeeper in the division who averages more completed passes per 90 minutes.

The Spaniard is often tasked with stepping out of his box to give Brighton an extra man in the first phase of their buildup. He showcases an impressive ability to break opposition lines and drive diagonal balls into full-backs making a forward run.

This part of the 24-year-old’s play would be crucial at Barça, but it is just the beginning of his skill set. Sanchez also makes the most of his immense build to be an absolute force when claiming balls around his penalty area.

50 games up for Robert Sanchez this week. He’s stopped the most crosses (27) and boasts the highest cross stop % (13.4%) of any Premier League goalkeeper this season.

The graphic is from earlier this season, but he truly dominates his 6-yard box.@StatsBomb#BHAFC pic.twitter.com/DuCaVwjCbH

His aggressiveness also allows Brighton to maintain intense pressure out of possession. Per Football Reference, the Spaniard is fifth among Premier League keepers this season for sweeping actions per 90 minutes. Plus, based on the work of goalkeeper analyst John Harrison, Sánchez is one of the league’s best in one vs one situations.

#PremierLeague 1v1 performance:#Alisson has been outrageous during 1v1s, saving over 7 goals more than an average #PL GK would be expected to ?#Sa & #Ramsdale have also been exceptional vs 1v1s?#Guaita & #Pickford are still struggling but their recent form has improved? pic.twitter.com/j6M0kYAHSt

Brighton are a smart club, and will not settle for a smaller payment. It will be interesting to see if Potter moves on to manage another side, which could provide extra motivation for Sanchez to make the next step in his own career.

Verdict: Everything in his career thus far reflects an incredibly well-rounded goalkeeper with the potential to give a side massive presence and technical excellence for years to come.

One goalkeeper who has recently taken a step in their career is Milan’s Mike Maignan. While the Frenchman is already at a Champions League side and Serie A title contender, he should still be on Barça’s radar.

Like Sanchez, Maignan has a rounded skill set. Brought in as Gianluigi Donnarumma’s replacement, the Frenchman has been very impressive in Italy, even without a ton of external hype. He provides that additional value around the box with his sweeping and claiming ability, and his shot-stopping has been very good now in the past two seasons.

Maignan does not quite match the ball-playing skills of Sanchez, but is still certainly calm and capable. Stefano Pioli’s system is another that values possession and the Frenchman has fit the style well.

Again, the main roadblock here could probably be the logistics of the transfer. Milan have Champions League money and have been smart with their business lately. On top of that, would Maignan want to move to a third country in the short span of his career?

Barça definitely still feels like it would be a step up, but it could be a tough deal for the club to pull off.

Verdict: A very well-rounded goalkeeper and a great fit in today’s game, but at a point in his career that be difficult for Barça’s timeframe.

Going back to the Premier League, another intriguing Spanish option is David Raya. While not a household name, Raya has steadily been putting up impressive numbers in recent years, growing a reputation as a talented modern goalkeeper with Brentford.

The 26-year-old was sidelined for a few months this season with a knee injury. This could, of course, provide some reason to be wary, but since returning in February, Raya has seemingly been in good form.

He stands out a bit in this list as he plays in a side that averages less than 45% possession, but the Spaniard is very involved when Brentford do have the ball. Raya’s 27.7 completed passes per 90 minutes are the fourth most among Premier League starting goalkeepers.

Sweeping is certainly in Raya’s locker as well. The description of these skill sets may start to sound like a broken record, but this kind of balanced profile is exactly what is needed at the Camp Nou. There are only two Premier League keepers who have averaged more sweeping actions per 90 minutes than Raya this season.

Even when comparing the Spaniard to his injury replacement Alvaro Fernandez, who was a La Liga starter at Huesca, his numbers stand out.

Now, this is Raya’s first season performing in the top flight, but the data shows that he has utilized these same skills in the English Championship. Also, while it is a second division, the level of competition there is certainly no joke.

Raya may not be a star name who will get fans excited, but he definitely has the potential to be a financially sound investment. After all, the club has recently reaped the benefits of looking into cheaper markets, and it is not like ter Stegen was a massive signing himself.

Verdict: A relatively unestablished name on the global stage, but with the skills to provide great value for money (especially if Brentford are relegated).

Through all the ups and downs, Barça remain a club with tremendous player pull. However, the top goalkeepers at Europe’s super clubs – Alisson, Ederson, Manuel Neuer – seem very content in their current situations and would probably never find themselves at the Camp Nou.

Luckily for Barça, there are some tremendously talented younger options out there who could also fit the club’s style.

Robert Sanchez, Mike Maignan, and David Raya look like three solid candidates, while Inaki Pena may just have a chance. It is unfortunate to think about replacing a legendary figure like ter Stegen – someone who has won everything there is to win in a Barça shirt.

But if the club can bring in another good ball-player who also possesses more of the German’s old ability to stop shots and sweep up play behind a high line, results will benefit massively.

There are definitely other options out there. Former La Masia keeper Andre Onana seemed almost perfect a while ago, but coming off of his nine-month ban, he will be joining Inter Milan in the summer. The 22-year-old Frenchman Illan Meslier has shown flashes but is currently in the midst of a very rough season at Leeds United.

Things seem to be trending in a good direction at Barcelona, and whoever the club decides to go with could be a key piece in taking that next step forward. The knock-on effect of having a mobile, confident goalkeeper who does not feel at risk with every shot on target will be excellent.