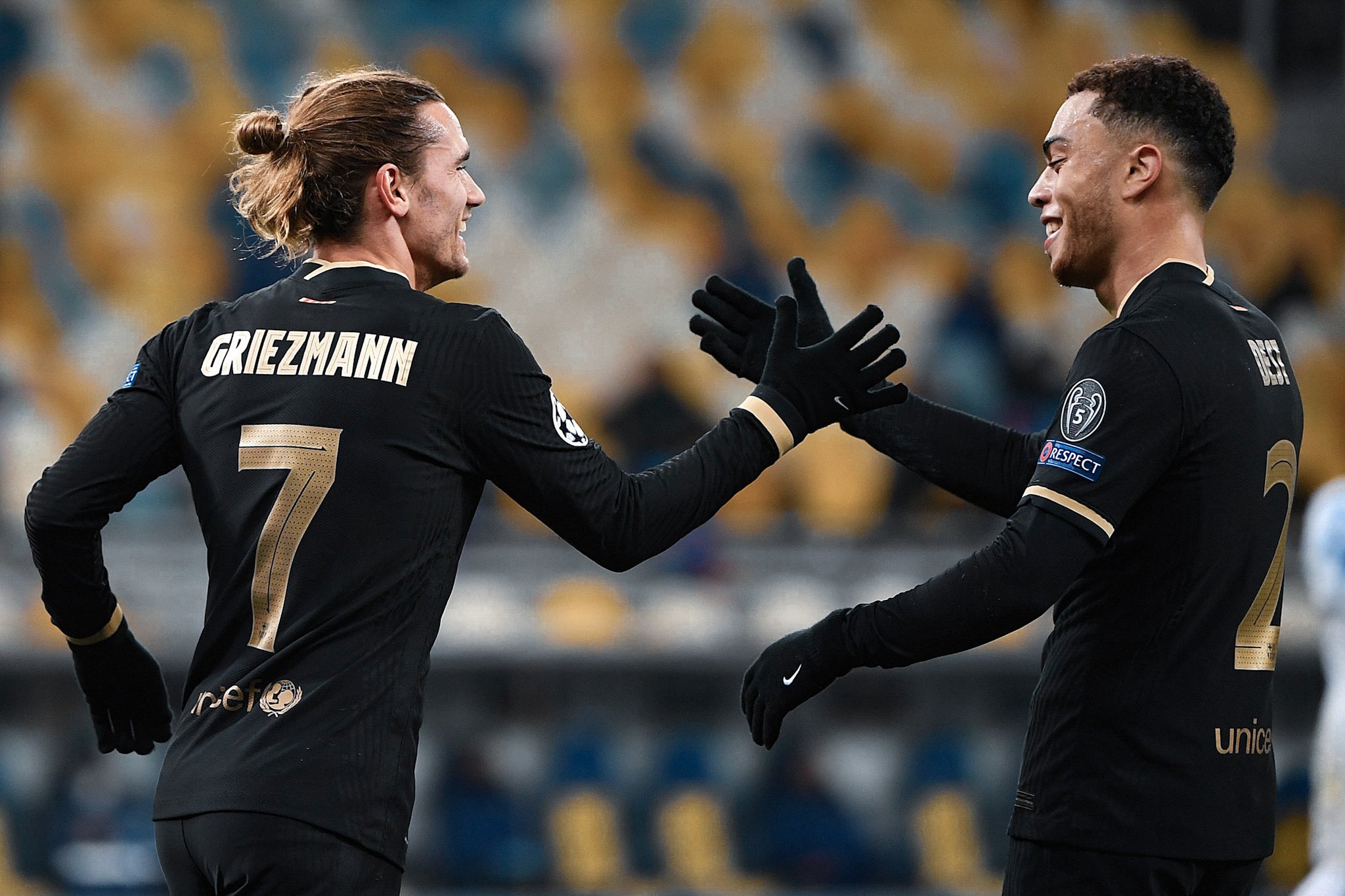 After a 2-1 victory in the home fixture for Barcelona, they now faced Dynamo Kyiv away from home in the Ukrainian capital. With both sides missing many key players due to injuries, as well as the pandemic in the case of Kyiv, it wasn’t a very promising fixture.

After the first half with some flashes of brilliance from Barcelona, the second half was what made the difference. Find out the tactics used, and the patterns seen throughout the match in this tactical analysis of Dynamo Kyiv vs FC Barcelona.

Lucescu’s Kyiv side started out in a 4-4-1-1 or a 4-4-2. Striker Benjamin Verbic would often be lower down the field than attacking midfielder Buyalskiy, primarily because the former had more defensive duties.

The midfield four was staggered, with Denys Harmash having more of an anchoring job and Shepelev moving up the field to join the attack.  As the pass-map below shows us, the staggered midfield was a characteristic of the Kyiv side.

There was a clearly better attack down their right wing for Kyiv. The full-back and winger on the left, Karavaev and de Pena respectively, were much more defensive than Kedziora and Sharapenko on the right as we can see from the heatmap below.

This was due to two reasons. Shepeliev, who was one of the two central-midfielders with more attacking duties, was a passing option on the right which was further up the field than the other midfielder, Harmash on the left.

The other reason was that with Pedri and Philippe Coutinho, Barcelona had two players who could play both as attacking midfielders as well as left-wingers. There were many rotations down Barcelona’s left, with a lack of directness a pure left-winger provides that Kyiv were able to use to their advantage to have a higher point to start the attack from.

Koeman’s Barcelona has rigidly stuck to a double-pivot system throughout this season. This match was no exception as Carles Alena and Miralem Pjanic started in the centre of the pitch, with Frenki de Jong and Sergio Busquets out of contention. Pedri and Coutinho would switch frequently among themselves, due to them both being able to play through the middle as well as down the left.

Down the right, Fransisco Trincao would look to get further up the field and then come in narrow. This would open up space for Sergino Dest to run into behind him as we can see from the pass-map shown below.

As expected from Barcelona, building-up from the back was a priority. In midfield, Alena and Pjanic would circulate possession, with Pedri or Coutinho playing through the middle and looking for passing lanes. Something that helped Barcelona immensely was Alena’s quick-passing. The La Masia product was on the top of his game, and the directness and more impressively, the consistency he provided with the passing helped Barcelona switch the play quickly.

In the second half, as more and more substitutions were made, Koeman would implement a 4-4-2, with Alena and Matheus Fernandes as the central-midfielders.

There was a clear contrast of duties of the two midfielders, with the Spaniard dropping deep to collect the ball while Matheus stayed up. This was not a particularly effective formation, but with Kyiv drained out and frustrated, Barcelona were able to capitalize.

The Barcelona team was clearly skewed in terms of the formation, with the right-side being more attacking than the left. Down the left, in the first half the full-back Firpo would look to underlap rather than overlap, and in the second half, as Alba came on, more overlaps were visible.

This was mostly down to the left-back’s decision making, as Pedri and Coutinho would often switch positions between left-wing and attacking midfield, which is shown in the similar-looking heatmaps in the viz below.

In Koeman’s Barcelona, usually, one pivot is more of an anchor with the other having more attacking duties. However, this time around both pivots would drop deep based on the situation and passing lanes, often moving apart to create new lanes down the middle. This was similar to Koeman’s system at Southampton where he would have the double-pivot acting as more of a reference for the team than it is at Barcelona.

Taking a look at Kyiv, their build-ups were rarely lateral. They looked to play directly in terms of their passing. The two images shown below illustrate the recurring theme we saw from the Ukrainians. They would look to pass vertically, and they had the most chances in the final-third after quick combinations to catch Barcelona flat-footed.

Barcelona produced an excellent second-half display to turn the tides in their favour. Even though the first half was even, Barcelona finished the game very strongly. Here are the game stats at a glance:

Barcelona not only enjoyed a ton of possession, but they also out-shot their opponents by quite a margin. Barcelona’s pressing was also much better comparatively. Barcelona allowed Kyiv to have only 76% passing accuracy and registered a higher pressing intensity (indicated by the lower value of PPDA – a metric to measure pressing).

Next, we take a look at the quality of chances created in the shotmaps and xG flow:

However, perhaps a bit more context is required here. Barcelona did spend their lion’s share of possession in opposition territory in the first half but were unable to generate clear-cut chances. There were moments where choosing to shoot would have been a better option, as indecision and a penchant for excessive passing led to nothing.

Buildup to shots and goals

Here we take a look at the goals Barcelona scored. Having been restricted to poor quality shots in the first half, it took some skill to unlock Kyiv’s defence in the second half. A neat interchange of passes involving Dest, Pedri, and Braithwaite led to Dest practically taking the ball away inside the box from Braithwaite’s feet and shooting low past Kyiv’s goalkeeper.

The second goal came soon after. A corner taken by Alena was flicked on Oscar Mingueza. Braithwaite met the flick at the far post to score his first ever Champions League goal. Soon after, Braithwaite doubled his tally from the spot after being fouled inside the box trying to score from a header.

Antoine Griezmann came on as a substitute late in the second half and bolstered his confidence by scoring Barcelona’s fourth and final goal.

Apart from this, Barcelona could have possibly increased their goal tally even further had second-half substitute Riqui Puig not missed a glorious opportunity. Following a wonderfully intricate buildup that stretched and tore Kyiv apart, Puig failed to score from close range. But the buildup itself was testimony that the youngsters of Barcelona can truly play some beautiful football.

Barcelona had a fairly comfortable day in defence. Their pressing up the field was much more intense compared to the La Liga game against Atletico, as shown by the PPDA time-flow chart here:

By virtue of fielding a bulk of young, energetic players, Barcelona could actually afford to maintain intensity all game. Here is Barcelona’s defensive heatmap:

Barcelona pressed aggressively through the center higher up the pitch, forching Kyiv to go wide and play long balls to escape pressure. And while Kyiv did that a few times, Lenglet and Mingueza aggressively won the ball back along each flank.

On the few occasions that Kyiv completely evaded pressure and progressed the ball high up, Mingueza showed brilliant skills to block shots or cut out dangerous passes. The following graphics – displaying Kyiv’s unsuccessful passes – clearly show how they had to play long balls from the deep to escape the press, and that they were unsuccessful fairly often.

Kyiv, on the other hand, chose not to press high. As shown, Barcelona had no problem passing out from the back.

Their major pressure areas were the middle and the defensive thirds. They tried their best to stifle all progression in the first half. They dealt with Dest’s crosses fairly well too. However, intricate passing and better movements by Barcelona in the second half unlocked their defence easily.

La Masia and youth to the forefront

Oscar Mingueza deserves a special mention along with Sergino Dest. Both youngsters produced sterling displays. Mingueza was calm and composed in defence, and very tidy in passing bar a couple of mishit long balls. He did not shy away physically from any duel and made some excellent blocks.

🗣 — Guillermo Amor: “Mingueza grew up at Barça and La Masia. He feels the Blaugrana colours and defends them.” pic.twitter.com/I2Qb8nT3dd

Dest used his recovery speed to great effect in sniffing out attacks down his side. But his biggest quality was in the offence. Fearless in taking on multiple players, playing neat passing combos with Trincao and Pedri in particular, he fully deserved his first goal in the Garnet and Blue, or we can say Black and Golden.

Carles Alena also got a rare start and justified his cause with a very assured and composed display. With an astonishing 99.1 % passing accuracy (106 out of 107), he kept the Barcelona midfield ticking. He also had two key passes to his name.

Riqui Puig finally got some minutes to play. He found himself in wide midfield role after Barcelona’s system changed to a 4-4-2 later in the second half. While he was not at his sparkliest best, he could easily have scored a goal had he kept his composure.

Matheus Fernandes and Konrad de la Fuente also made their first-team debuts in this game. Limited game time meant they could not particularly assert themselves.

The previous weekend was harsh for the Blaugrana. They succumbed to the battle on the field to Atletico Madrid and lost two senior members of the squad in Gerard Pique and Sergi Roberto to possibly long term injuries. Lionel Messi and Frenkie de Jong were rested for this game, and Sergio Busquets was already ruled out with a previous injury.

Given all these setbacks, it was a wonderful display from the team and the youth in particular to overcome a tricky fixture. This display should also bolster the team’s confidence as they return to La Liga action next weekend against Osasuna.