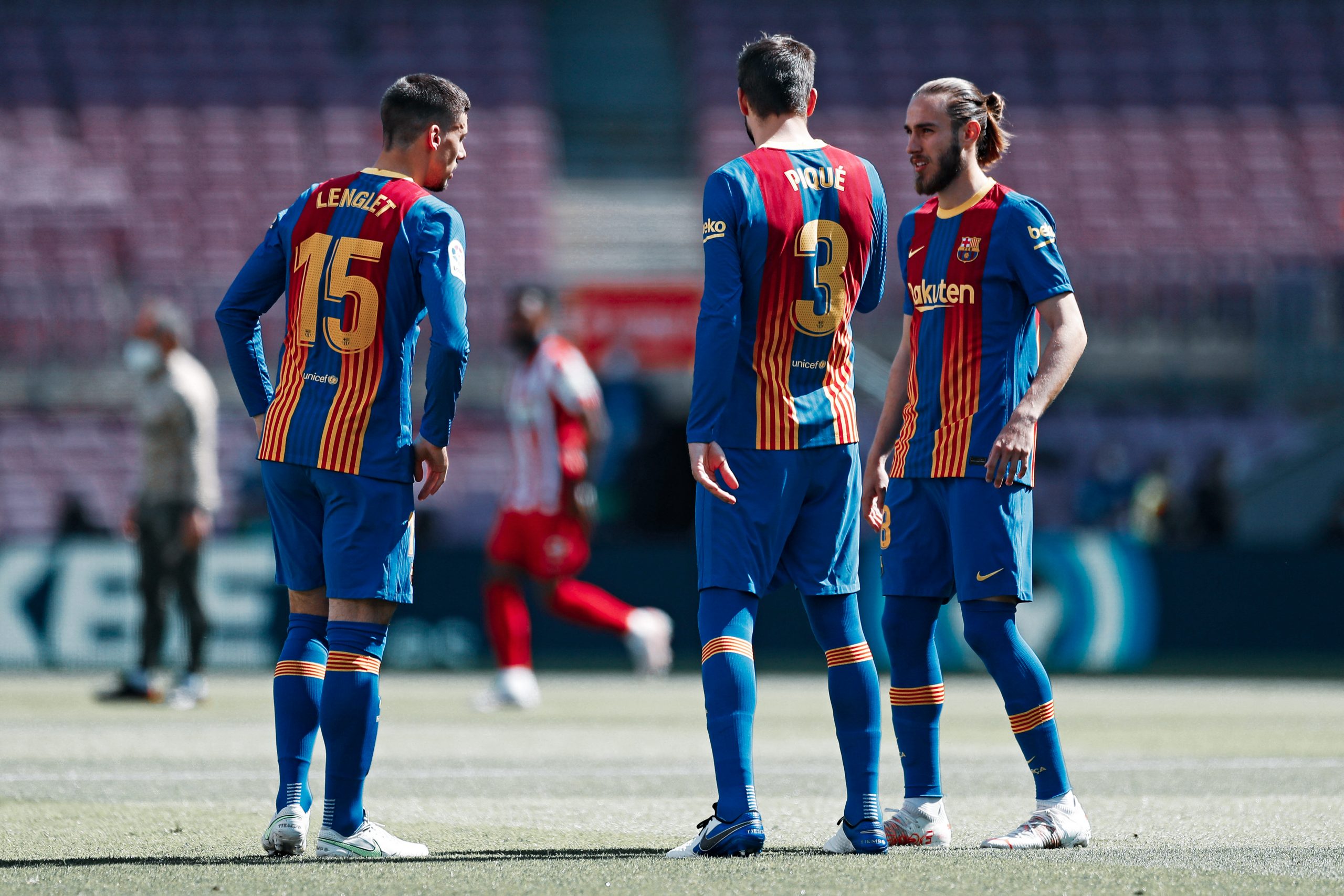 Assessing the potential blend of styles between central defenders in the Barcelona squad and possible future transfer targets.

A strong centre back pairing is, of course, a key building block for a successful team. Creating a great duo, though, goes beyond simply putting two quality defenders together. Each individual has a unique defending style and finding that perfect balance of aggressiveness and conservativeness, pressing and containing, is what sets apart the best of the best.

Given Barça’s changes at centre-back in the past year and more that are likely coming, it will be important to find this balance and establish a go-to partnership for the future. With that in mind, let us analyze the different roles within the position, the tendencies of the current squad members, and some potential highly rated targets on different ends of the style spectrum.

How do some centre-backs defend differently than others?

While the terminology differs across borders and backgrounds, most people familiar with the game have a general understanding of how a centre-back pairing can be balanced – essentially, one is the aggressor and the other is the container. Some people think of these roles as stopper and sweeper, or, as The Athletic’s Michael Cox deemed them, dogs and cats.

In this metaphorical sense, centre-backs who are more of a dog are more likely to step out and chase the ball. On the other hand, those who are more cat-like tend to stay back and contain or sweep more often.

These terms are definitely not absolute, though — a centre-back can have qualities that reflect both styles, and some have the ability to shift more to either side of the spectrum depending on who their partner is, who they are playing against, etc.

With that being said, a great example of a pretty clear, consistent relationship between the two styles was Real Madrid’s pairing of Sergio Ramos and Raphael Varane. Ramos acted more as the aggressor, or dog, as he stepped out to contest dribblers or cut off passes, while Varane acted as more of a cat – staying further back and making more “recovery” plays.

Years ago at Barça, this dynamic could also be seen between Javier Mascherano and Gerard Piqué.

Mascherano would step higher and close down opponents much further away from the goal. On top of this, the Argentine averaged 11.42 total pressures per 90 minutes to Piqué’s 7.47.

Examples like Ramos and Varane, Mascherano and Piqué, or even Joe Gomez (more of a dog) and Virgil van Dijk (more of a cat) for Liverpool in 2019/20 and their team’s successes reflect the benefits of creating a well-balanced pairing. Do Barcelona currently have the personnel to pull this off?

To start, we should evaluate the club’s central defenders who received significant playing time this past season. Data can help to reveal their places on the stylistic spectrum.

Óscar Mingueza, whose numbers are impacted a bit by the minutes he played at right-back, stands out for his defensive aggressiveness. He shows the most dog-like tendencies in the squad, as he often steps out of deeper positions and looks to win the ball. The Spaniard’s mobility, which has allowed him to slot in as a full back at times, helps him in this regard.

On the other hand, Piqué is unsurprisingly the furthest towards the cat end of the spectrum. We have seen how the World Cup winner took on a deeper role with Mascherano, and now, well into his thirties, it makes even more sense for Piqué to be staying deeper and anticipating the game from behind.

Interestingly, Araujo and Clément Lenglet are very similar to each other in this stylistic regard. Thus, a pairing between the Frenchman and the Uruguayan would not have a very clearly defined relationship.

Of course, Barcelona do already have Eric Garcia coming in for the upcoming season. While the 20-year-old has not played much club football in 2021, here is where he would lie based on his numbers from the 2019/20 Premier League campaign at Manchester City:

With a partner like Aymeric Laporte,Garcia takes on the more aggressive role. However, in a pairing with Araújo, possibly, the Spanish international would likely stay back while the Uruguayan utilized his much stronger ability in duels by stepping out more.

But, what if the club wanted to make an additional signing at some point? Who are some potential options with different styles, or even just examples to try to build off of the recruitment of other clubs?

In terms of aggressive, high-stepping centre-backs, there is a very solid pool of young talent breaking through. Several of these starlets have been heavily linked with a move to the Camp Nou recently as well.

One of these players is Dayot Upamecano. While the Frenchman will not be coming to Barça any time soon, as he recently agreed to join Bayern Munich, he still serves as a decent example of the kind of profile the club would be targeting in the dog market.

The Frenchman shows a very strong tendency to step high and win the ball. He is also very well-rounded – both in and out of possession – with his aerial ability, ball carrying, and distribution.

A different, much more obtainable alternative is Atalanta’s, Cristian Romero. The Argentine international has really broken out on the big stage this season, and is undoubtedly one of the most aggressive, physically imposing centre-backs in world football.

In a pairing with someone like Araújo, Romero would undoubtedly push his partner back into more of a sweeping role. A big question with the Argentine, though, comes on the offensive side, as his progressive passing numbers are far from great – this being an area in which Araújo already lags behind a bit. The idea of a Romero-Garcia partnership is intriguing and would help counteract this weakness.

Lastly, we go back to the Bundesliga for one of the top risers in the big five leagues in 2020/21 — Edmond Tapsoba. The Bayer Leverkusen centre-back has been clearly the most aggressive member in his grouping with Sven Bender and Jonathan Tah.

The Burkina Faso national team member has also shown great efficiency on the ball throughout his career. He does lack the aerial prowess of the likes of Romero and Upamecano, though.

There are some solid options out there if Barça wanted more of an aggressive presence in the backline and, of course, had the funds to accomplish this. What about the cat side of things?

The talent pool of centre-backs who have been linked to Barça that are further on the cat side is a bit more limited. However, two names stand out who have often been associated with the club’s style for their technical attributes.

The first of these defenders is Pau Torres, who has shown tremendous ability on the ball for Villarreal. Defensively, he rarely steps to engage in duels and pressure the ball, instead of acting as a very conservative presence.

It could definitely benefit Torres to play with a partner who is not only more aggressive but also more efficient when trying to win the ball from attackers.

Then, there is another left-footed defender — Aymeric Laporte. The Basque centre-back has been linked with Barça since all the way back in his time as a youngster at Athletic Club. Like Torres, Laporte has very low numbers for stepping out and pressing in higher areas.

The French youth international turned Spanish senior international is an elite ball-player, though. He is also significantly more active in the air than someone like Torres or even his former teammate EricGarcia.

Some other well-known centre-backs who fit this more passive, sweeping style include Thiago Silva, William Saliba, Jonny Evans, and the aforementioned Raphael Varane. These players either have no real chance of joining Barça or have not been linked to the club much at all in recent seasons. Torres and Laporte seemingly always come up in rumours, though, and would provide something different stylistically.

It is impossible to predict what the board will end up doing transfer-wise. Much of this will depend on behind-the-scenes operations and the financial state of the club. It is even unclear whether Koeman will try to stick with his three at the back experimentation or go with a traditional 4-3-3. Nonetheless, it is still intriguing to think about the dynamic between a future pairing – with or without an additional signing.

As Piqué moves closer to retirement, Lenglet is linked with an exit, and EricGarcia joins, big changes are already in motion. Araújo seems to be the player whose place in the side next season is nailed down the most, so it makes sense to think about building around the Uruguayan.

A potential young partnership with him and García could see Araújo as the aggressor and García taking the cat role. This could also help balance things in possession, as García’s progressive passing could help cover up some of Araújo’s weaknesses in that area.

Mingueza could provide cover for the dog role as someone mobile who likes to step out, while Piqué could rotate as the deeper defender who sits back and reads the game.

A new signing could change the whole dynamic, though. Someone extremely aggressive could move Araújo to more of a conservative role, or maybe push someone like García higher up the pecking order – there is no way to know.

Ultimately, the make-up of the squad and the personnel are pretty unpredictable, but it will be important to strike up a good balance between whoever ends up lining up at the centre of defence. Successful partnerships like Ramos-Varane and Mascherano-Piqué are a testament to this.