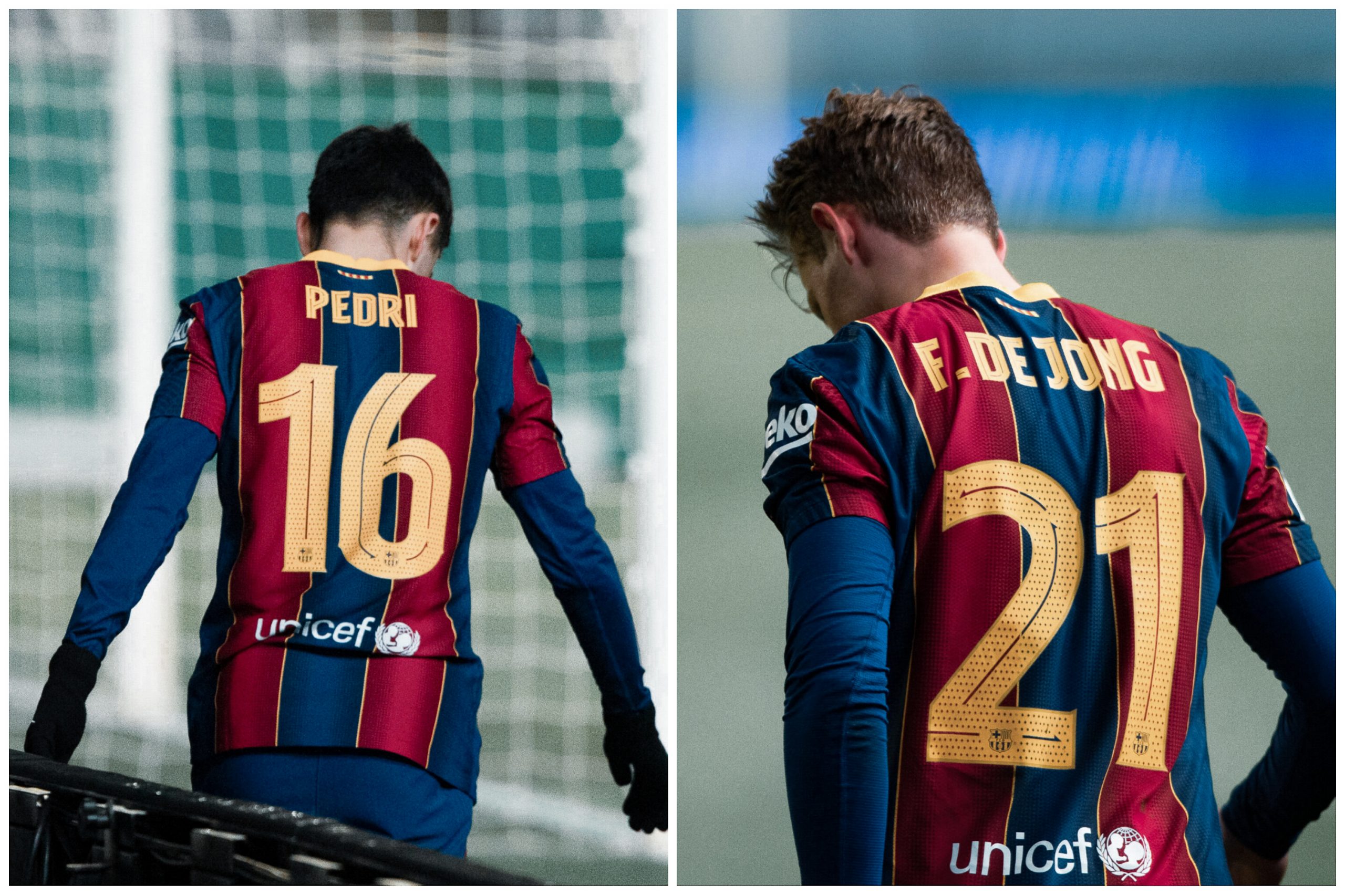 Few elements — let alone formations — of football have a varied, diverse history than the 4-3-3 formation. From Louis Van Gaal’s systematic, rigid, yet effective system to Pep Guardiola’s positionally-oriented, fluid, vertical formation, this formation has had a lot of success when used in the right team.

The current Barcelona team is one such squad that has benefitted from the shift to a 4-3-3 from the earlier 4-2-3-1 employed by Ronald Koeman. Among the players, the interior midfielders are the ones that benefit from it the most.

It has been more than a month since Barcelona’s last loss. Seven wins and two draws in nine games compared to three losses, five wins, and a draw in the nine before that shows significant improvement. In the 4-3-3, the two central-midfielders are also called as interiors. These players operate in the channels or half-spaces, referring to the second and fourth sections if you divide the pitch into five vertical parts.

Since the match against Huesca on the 4th of January, when the 4-3-3 was used very well, Barcelona have played three matches. In these games, Frenkie De Jong has accumulated two goals and an assist.

The Dutchman has as many goals in the last four matches as he did in 42 appearances through the tenures of Quique Setien and Ernesto Valverde, and has finally started to find his feet at Barcelona. In the same four matches the other interior midfielder, Pedri Gonzalez, has a goal and an assist and nine key passes. The 4-3-3 is clearly benefitting these two players. But what exactly is enhancing their output?

The philosophy of the team remains the same in every formation. In Barcelona’s case, maintaining possession, sustaining attacking play, and having verticality and fluidity while playing a positional game. To achieve this, the full-backs are usually high up the pitch, the wingers stretch the field, and the striker often drops back. The interiors are crucial in this.

Their job is to receive the ball in the half-spaces and either maintain possession, drive forward or release a player depending on the situation. For this, their decision making has to be spot-on. A mentally demanding aspect apart from this is the positioning. They have to be in the right position to receive the ball, which means keeping an eye on multiple opposition players when in the final third. This positioning is different for attack and defence, as is the case for every position. In defence, Pedri and de Jong will drop back, with the latter having more defensive duties. In attack as well, they have slight differences in their roles.

As we can see from the following images, number 16 and number 21, Pedri and de Jong respectively have different average positions. Pedri is always higher up the field, with de Jong being closer to the pivot, Sergio Busquets. Another observation that shall be expanded upon later is Antoine Griezmann’s position. The Frenchman has had some impressive performances recently but is not at the standard expected from him. He is seen having an average position lower than that of Pedri’s in two of the three images.

Now that we have an idea of what these roles entail let’s examine the production thanks to them.

Out of the goals and assists we have seen from the two interiors recently, there are some situations that essence of how the two youngsters have been primary beneficiaries.

In the above example, we see Frenkie De Jong making a run into the box. Spotting this, Lionel Messi launches a pass into his path which is converted by the Dutchman. A simple tap-in, but the late run is key.

Barcelona have regularly had large spells of play in the final third. Lacking directness down the wings, as well as incisiveness at times, were recurring problems in the 4-2-3-1. Here, because of the Dutchman’s entry into the box, a team such as Barcelona whose striker is often extremely outnumbered can make use of the x-factor that the late runs provide.

In the image below, we have an example of the dynamic roles of both interior midfielders. De Jong has again ventured into the box, while Pedri looks to link-up with Griezmann down the left. Finding space to make a pass, the young Spaniard uses the outer part of his right foot instead of his left food to execute it, leading to a wayward pass. However, it showcases how this formation looks to amplify the strengths of these two players.

De Jong, who is taller, stronger physically has the job of getting into the box. Pedri, the more agile, incisive passer has the job of providing passes to the attacking players. The above image illustrates how both players’ positions have been to increase their attacking output. Similar scenarios have resulted in Barcelona being able to cope with having multiple players that like to receive the ball around the box.

What this means for Barcelona

Barcelona have recently been in good form. After a sub-par start to the season, to say the least, the Catalans are gradually improving. The 4-3-3 formation seems to be the key. The lack of a pure striker, not enough directness, and little to no incision at times are all problems that have plagued this side for a while now.

Will the 4-3-3 solve all these? In short, no. It provides an option, especially a goal-scoring threat, which would usually be the secondary plan. For a primary plan, the 4-3-3 is the Barcelona way, but just the tweaks in the interiors’ roles will not help. Additionally, it allows the likes of Riqui Puig and Ilaix Moriba to come into the XI with ease, given they have played in this system all their life.

To reach a formation that makes a team greater than the sum of its parts is a long journey, and the recent results and player roles are a step in the right direction — a huge one for Ronald Koeman, who is proving he deserves more time.