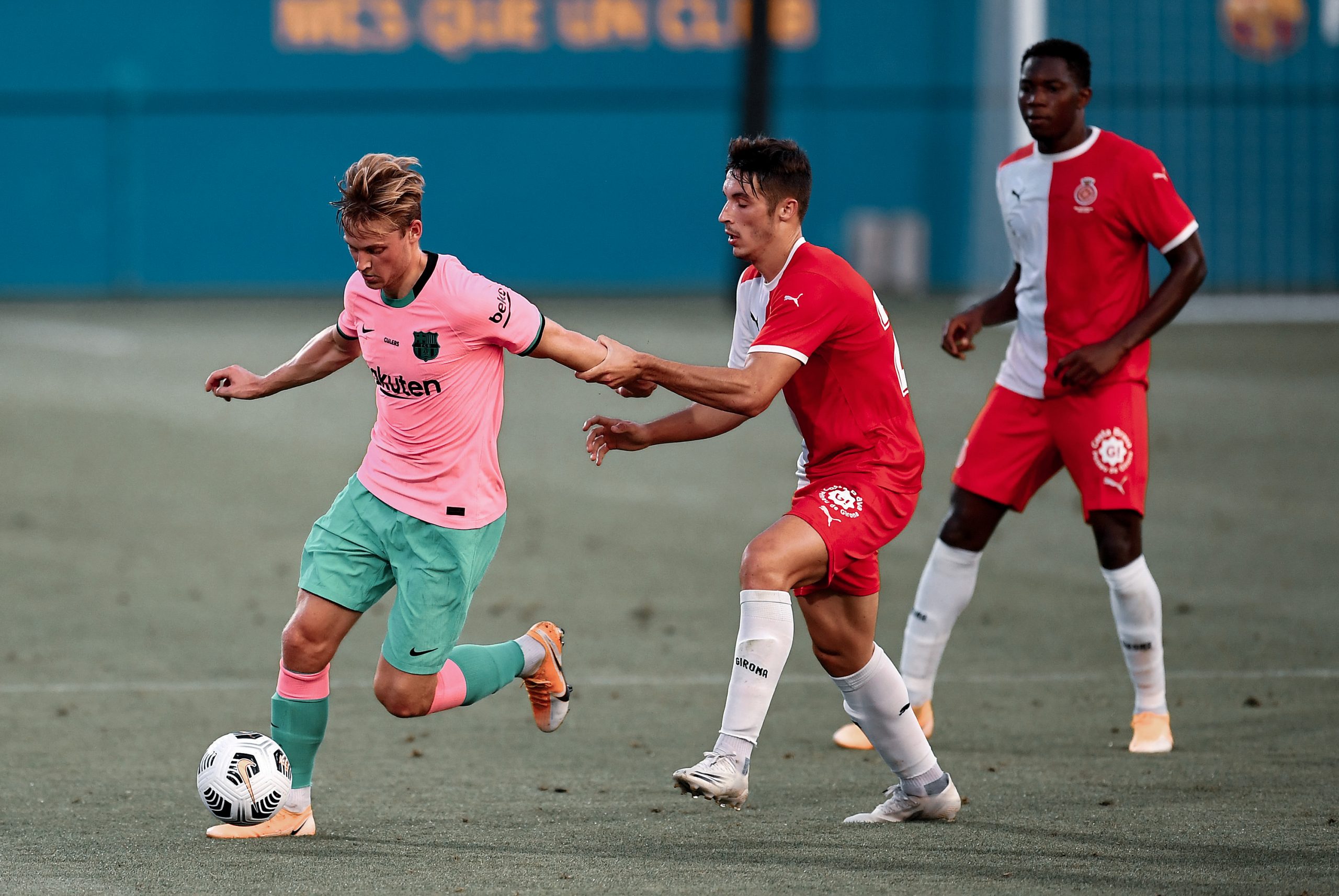 Frenkie de Jong seems to have a definite spot in the starting XI under new Barcelona coach and fellow Dutchman Ronald Koeman, but who will partner him in the double pivot: Sergio Busquets or Miralem Pjanić?

In the small town of Buitenpost, a young Dutch boy would wear the blaugrana colours for the first time. In what was his first match for Barcelona, albeit in a friendly, the Dutchman would go on to score a hat-trick: two goals from outside the box and a penalty, all in a mere 45 minutes. That was the beginning of an illustrious Barcelona career for Ronald Koeman. He went on to become one of the key figures of the Dream Team, scoring an astonishing 106 goals in 350 games played, including the winner that won Barcelona their first European Cup in 1992.

Fast forward, post-retirement, he always spoke fondly of the club, the fans and the city and the love was mutual. However, now he returns as the manager, hoping to continue where he left off as a player. He has a massive responsibility on his shoulders: to guide the Catalans back to the top while there’s a messy and chaotic revamp imminent at the club. All this, while the fans and the Barcelona board keep a close eye on the performances; a small mistake and his garnet and blue dream could be over within months.

Ronald Koeman returns to the club after a successful managerial stint with the Dutch national team. After the failed terms of Dick Advocaat, it was clear that the team needed a new spark and a change in pace. It was at this point that the KNVB looked towards Koeman, who quickly began the revival, introducing a new generation of players to the national team and bringing about a shift in tactics. The focus of which was a move towards a more possession-oriented style. The cornerstone of this team, of course, was the midfield, wherein his lynchpin became young Frenkie de Jong.

The youngster got his debut in 2018 and made an immediate impact. He had a calm head and looked ever so assured on the ball, illustrating maturity well beyond his years. Add to this, his work rate and athletic ability, and Koeman had the perfect solution to the problems he wanted to address.

De Jong’s meteoric progress did not go overlooked by Barcelona, who were searching for the perfect long-term replacement for Sergio Busquets. The Spanish club kept a close eye on him, and it was during the 2018/19 season in which Ajax reached the Champions League semi-finals, it became clear: it was time to make a move.

The Dutchman dominated every rival midfield with such ease and poise that it left Ajax fans purring and Barcelona fans wanting. It was thus, in January that Barcelona decided to move to buy de Jong, and the youngster decided that the Spanish club would be the best choice for him, rejecting the approaches made by Manchester City and Paris Saint-Germain in the process.

The year to follow must have been tough to swallow for De Jong. Ernesto Valverde chose to operate the Dutchman in a rather absurd role, where he was assigned ball progression duties but little else. All creative tasks thus lay with the Argentinian great on the right flank, since the other Barcelona midfielders offered little to no verticality or imagination in the final third.

When Quique Setién arrived in January, it was hoped that he would see the light, but it wasn’t to be – De Jong continued in a limited role under him as well. It is thus not a surprise that De Jong’s xG build-up numbers are severely lacking, contrasting to his previous season with Ajax.

Now that Koeman has joined Barcelona in a managerial outfit, it is hoped that De Jong is given the role he so desires. The 23-year-old has the potential to be the keystone of the Barcelona midfield – the player around whom the team can revolve. Koeman knows how to get the best out of de Jong, and has not been shied away from speaking about it even before joining the club. Thus, it is only a matter of who partners the Dutch midfielder in a new-look Barcelona.

Koeman played a 4–2–3–1 shape with the Dutch national team. The number 10 spot was often occupied by the versatile Georginio Wijnaldum. Behind him, Koeman played Martin de Roon and de Jong together, with the latter operating in a deeper role. He was the one who looked to bring out the ball from defence towards the attack, acting as more or less the engine in the centre of the park.

“The plan is to start playing Frenkie de Jong in the position that he plays with the national team as well. I remember attending a Barcelona game and I saw him play a position where I wouldn’t play him as a coach. You’ve spent a lot of money on a young player. You should then play him in his own position, where he can perform in a way you’d expect from him. He’s shown at Ajax and with the Dutch national team which position suits him best and that’s where he will be playing at Barcelona as well”

Ronald Koeman, speaking to NOS after his appointment as the Barcelona coach

At Barcelona, Koeman looks to continue in the same vein. With big-buck signings Philippe Coutinho and Antoine Griezmann set to occupy the number 10 role for Barcelona this season, and De Jong set to become the star in the midfield, the only spot open is as part of the double pivot. With the likes of Riqui Puig, Carles Aleñá and Pedri listed on loan, the team will be left with two experienced heads to complete the tandem with Frenkie de Jong: Sergio Busquets and new signing Miralem Pjanić.

32-year-old Sergio Busquets has established himself as one of the best defensive midfielders of our generation, and while he might be on the wrong side of the age spectrum, he still has a lot left in the tank. This was proven last season as he resurrected his career after a disastrous 2018/19, playing closer to the defence.

Busquets, even with his old legs, has the defensive ability to dominate in this role. A quick comparison with De Jong’s Dutch partner Marten de Roon shows Busquets commands or is at least comparable in every category barring successful pressures, which is understandable since at his age he’s more reliant on positioning than pressures to win defensive battles.

Graph by Football Slices, data by FBref and StatsBomb

The issue with pairing Busquets alongside De Jong is that it still does not give the latter the ideal role he needs. Koeman has explicitly mentioned that he intends to provide him with a role similar to the one he has with the national team, and that would mean Busquets would need to play further up the pitch, as he did in some games the previous season.

While this does give a chance for Busquets to display his creativity and vision to break the lines, it has a significant flaw: Busquets no longer has the stamina, or speed to revert back from further up the pitch to make interceptions, therein creating a defensive hole.

Miralem Pjanić is a new arrival at the Camp Nou and comes off another Serie A title with Juventus. The Bosnian is a more creative option compared to Busquets, as can be seen by his 2.76 shot-creating actions per 90 as compared to Busquets 1.81 in the previous season.

Moreover, Pjanić positions himself further up the pitch as compared to Busquets. Although he did play the role of the deepest midfielder in Juventus, he wasn’t the one who carried the ball out from there. In fact, he positioned himself just behind the opposition’s first press and tried to give the centre-backs a passing option behind those lines instead of progressing with the ball himself through the opposition’s first line of defence.

This is suitable for the role De Jong intends to carry out as Pjanić can provide a passing option to De Jong further up the pitch, as he brings the ball out. Furthermore, he is more than capable of breaking lines through long balls and defence-splitting passes. Simultaneously, this can also address the issue of lack of verticality at the club. He also has a long shot in him, which can be useful to break teams that sit back deep against Barcelona.

In terms of defensive actions, Pjanić does stand behind Busquets, but Frenkie de Jong looks set to be the all-rounder in the pivot, which includes his defensive ability and ability to win the ball, as he does often showcase for the Netherlands. If De Jong is set to be the engine, Miralem Pjanić should be the one paired with him, although if the need arises for a more defensive half of the pivot, Koeman can always look towards Busquets.