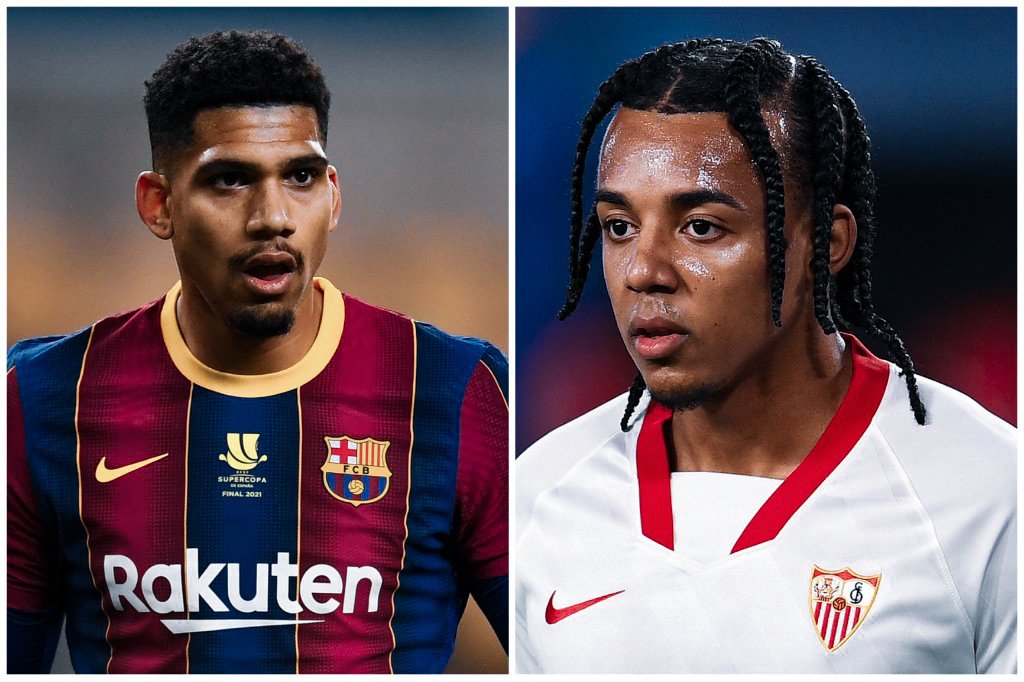 On the back of a 2-8 loss in the Champions League, with a defensive squad of an ageing Gerard Pique, a perpetually injured Samuel Umtiti and an underwhelming Clement Lenglet, Barcelona was doomed for another disastrous defensive season in the 2020/21 season. However, with the rise of Uruguayan wonderkid, Ronald Araujo, Barcelona was able to fortify their defensive line.

The club is undergoing its most significant transitional phase since 2003, with new faces being brought in to rejuvenate the squad. It has been long reported that Barcelona are looking for a new, young centre-back. When the Catalan’s club pursuit for Matthijs de Ligt in 2019 failed, the club decided to postpone bringing in a new centre-back, but the humiliation in Lisbon served as an anchor to the grim reality: Barcelona needs new centre-halves.

French wonderkid, Jules Kounde, is first on the list of numerous European giants. In the summer of 2020, the 22-year-old was linked with a €70 million switch to Pep Guardiola’s Manchester City, however, that transfer failed to materialise. Ever since, Kounde has been on the radar of several mega-clubs in Europe, with one of them being Barcelona.

But with the rise of Ronald Araujo, is an expensive investment in Jules Kounde really necessary? To solve that puzzle, Barça Universal does an in-depth statistical analysis and comparison between Ronald Araujo and Jules Kounde. All the data used in the article is per 90 data, unless specified otherwise.

The ability to tackle is a fundamental ability that all defenders must possess. For many years now, there has been a roaring debate about whether a high number of tackles implies improper positioning, but the truth is that football is not binary. While sometimes an unnecessarily high tackle count might imply poor positioning, a defender’s ability to tackle usually positively correlates to the defender’s ability as a whole.

The following statistical comparison is regarding the number of players tackled by Araujo and Kounde, respectively. The second chart on the same axes portrays the number of dribblers tackled. As seen, Araujo with a tackle rate of 1.54, is a more frequent tackler than Kounde, who has a Tkl of 1.00.

However, Kounde tackles more dribblers than Araujo. This does not necessarily turn the favour of this metric to Kounde’s side. Football is more systemic than ever today, with a heavy emphasis on positional play and crossing, the number of players who are tactically permitted to dribble has decreased.

Managers would prefer the players to progress the ball through passing. Due to these circumstances, it is highly probable that Kounde has faced more players who dribble than Araujo, due to which his numbers in this sector are slightly higher. Additionally, Barcelona deploy a higher backline than Sevilla’s, and the best way to beat a high defensive line is to have your strikers make perfectly timed runs behind the defence so that they can receive the ball through either a through pass or a cross – this is a reason as to why Araujo might not have faced as many dribblers as compared to Kounde.

A defender’s ability is insignificant if they are unable to make an impact on their team. The reason Virgil van Dijk finished second in the 2019 Ballon d’Or rankings was not because of his unparalleled defensive abilities, but because of the monumental impact, he had on a defensively liable Liverpool team. The following pie charts, present each player’s number of players tackled as a percentage of their respective team’s number of players tackled. Araujo is responsible for an astounding 11.2% of Barcelona’s total tackles, while Kounde is responsible for a respectable 7.04%.

There is a lot more to defending than just tackling. At the end of the day, it is a shot on target that leads to a goal. Blocking a shot can have a direct impact on the game. Blocking is not just limited to shots, but also to passes. Stealing possession from the opposing team is vital for controlling the game, and blocking passes helps with this.

Every great manager has placed a heavy emphasis on pressing. Putting pressure on an opposing pressure forces them to make a quick decision, which can often lead to a loss of possession. While all players in a team are required to press, the stake is at an all-time high when defenders are pressing. The defensive line is the last line between the goal and the opposition, and so if a defender’s pressing turns out to be inefficient, they could end up leaving a pocket of space for the opposition to exploit.

Clearances refer to when a defender clears the ball away from danger. Nowadays, with the rise of technical football, managers are telling their players to not mindlessly clear the ball so that possession can be maintained. Regardless, clearances are a fundamental part of the game and won’t fade away regardless of how the game evolves tactically. Araujo and Kounde clear the ball 3.65 and 4.17 times per 90, respectively.

The following is a box that displays the distribution of interceptions per 90. Kounde’s interquartile range and range are both considerably higher than Araujo.

La Liga is full of talented defenders. The emphasis placed by La Liga managers on defending is second to none. Some of the best centre-backs of the last decade – Pique, Ramos, Godin, Mascherano, Pepe – were/are all La Liga players. Many times in La Liga are undergoing transitional periods, but the high quality of defenders has persisted.

The following is a scatter plot that pits Araujo and Kounde against other notable centre-backs in La Liga in terms of interceptions (y-axis) and tackles (x-axis). Araujo and Kounde both have impressive placements on the plot.

Araujo is second only to Pique when it cames to tackles per 90. This means that he tackles more players than 90, than some very notable centrebacks like Sergio Ramos, Raphael Varane and Jose Gimenez. On the other hand, Kounde is one of the leaders in interceptions per 90. Only Varane, Jose Gimenez, Sergio Ramos and Felipe accumulate more in that metric. For Kounde to be amongst these seasoned defenders is a testament to his immense ability and talent.

Believe it or not, defence is not the only thing expected from defenders. Football has evolved tremendously, and most teams in the world build from the back. Building from the back, like the name suggests, is essentially commencing the attack from the backline in order to maintain possession.

Traditionally, during a goal kick, keepers would just swing the ball into the final third, but now managers have realised that there is a lot of uncertainty regarding whether the attacker will win the header over the opposing defenders. This is why defenders are expected to be able to pass the ball well. The following chart plots the distribution of each player’s passes completed against the distribution of their pass completion percentage.

An excellent metric to determine the impact of passes is to find out the distance the ball progressed towards the opposing goal. This is known as progressive distance. The following chart presents the progressive distance of each player’s passes as a part of the total space of their passes. According to this, Kounde’s progressive distance is more generous than Araujo’s, and his goal against Barcelona stands as proof. However, the statistics used to construct this chart are not per 90, and Kounde has played more games than Araujo.

Ronald Araujo and Jules Kounde are splendid defenders with an infinite amount of potential. With Barcelona in a monumental debt, the transfers that are brought in should be of players who are absolutely necessary. In an ideal world, Kounde’s ability on the ball would perfectly complement Araujo’s strength and robust nature. Unfortunately, that looks far from likely. That said, whatever price Sevilla put up on the Frenchman will probably be worth it and paid off in a handful of seasons.