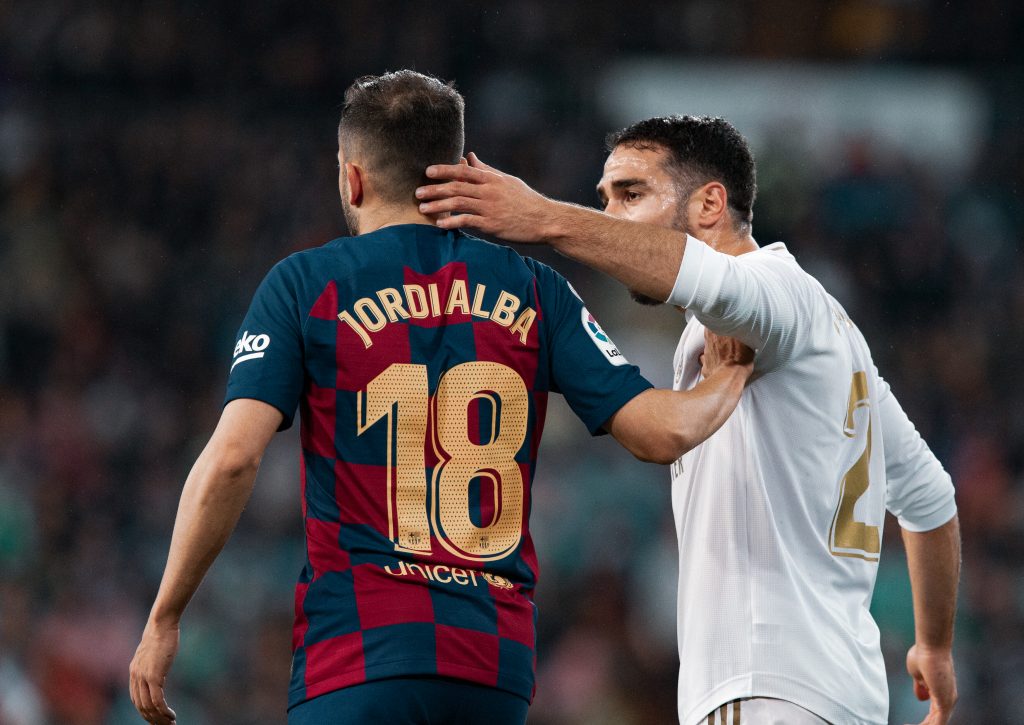 In recent seasons, Barça’s full-backs have not been one of the strengths of the team. There has been inconsistent performances and a lack of understanding in what is required to play the position. In this analysis we will try to solve the questions: what should be the role of the full-backs at Barcelona, and what should be expected?

Barcelona’s full-backs have been somewhat underperforming for a number of years. The club has had some of the best full-backs in the history of the game, but lately there has been something missing. At Barça, players in this position have to be able to defend and attack just as well. Although not always considered the most important position on the pitch, full-backs are crucial to the system. They must know where to position themselves at all times and know when to make runs.

Left-back Jordi Alba is one of the longest serving players at the club and a graduate of La Masía along with Sergi Roberto. He is the one that understands the role best and is the most effective offensively. His pace has been a real asset for the Catalan side and his runs in behind the defence and cut backs have been a real strength for Barça. However, he has looked short on confidence for a season or two and this has come at the cost of his defensive duties.

Nélson Semedo, operating from the right, is a solid player that may be the best full-back at defending at the club. He is strong in the tackle and rarely gets caught out of position. He is good at one-versus-ones when defending and has often come out on top against pacey wingers. Nevertheless, he lacks understanding going forward for the team. He can get caught out of position by not offering himself in the correct zone of the pitch when the blaugranas are attacking. But, with five assists already this campaign, as many as he managed in his previous two courses, there are signs of improvements.

Since Dani Alves departed in 2016, Barcelona have failed to find a replacement that could get close to his level | Photo by David Ramos via Getty Images

Sergi Roberto is another of Barcelona’s full-back options. Converted from a central midfielder into a right-back, it shows how well the Spaniard understands the game that he can play either position to such a high standard. Like Alba, Roberto is strong going forward and his tireless running benefits the team. His passing and positioning are what any full-back for the Catalans should aspire to. That said, in the bigger games his defensive fragility can get exposed.

Lastly, Junior Firpo is the newest addition to the full-back department. After an impressive season at Betis, Barcelona purchased him in the 2019 summer. Since then, the 23-year-old left-back has been used sporadically and has not had a consistent run in the team. Only playing 17 times so far for Barcelona, it is unfair to judge him based on these performances. It takes time to adapt to the club as the system is often very different from what one was used to in the past. Nonetheless, Quique Setién, his former coach at Betis, could be the manager to unlock his potential if given a chance.

How Liverpool’s full-backs are so effective

There is no doubt that Liverpool have been one of the dominant forces in football for a number of seasons now. A lot of their success is due to their full-backs being so effective. They are able to press teams back as their full-backs occupy such a high position. They are always available on the wings, which means they are able to stretch teams and create more space for players in the middle. This is something that has been lacking for Barcelona for some time now. The azulgranas‘ full backs do not get into threatening positions enough. This means teams feel too comfortable in allowing Barça the ball out on the wings and can pack the centre of the pitch.

❛ The rule is: be an option, get the pass or be available for other players ❜

Furthermore, the area that Barcelona’s full-backs could learn the most from Liverpool’s is their deliveries into the box. Andy Robertson and Trent Alexander-Arnold register so many assists because of how good their crossing is. Both Liverpool and Barça have similarly small front three’s, so there is no reason why the Spanish giants could not do the same.

The final ball of Barcelona’s full-backs is the area that needs to improve the most. Jordi Alba was the best at this when he would run in behind the defence and cut the ball to Lionel Messi on the edge of the box. Or the goal against Napoli in the Champions League, Semedo offered the width and run in behind, which allowed Sergio Busquets to play him through, resulting in an easy cutback to Antoine Griezmann. If Barça can successfully integrate this into their game more, then it will undoubtedly generate more chances at goal. It also stretches teams and creates more space in the middle of the park too.

Barcelona do have talented full-backs at their disposal, but their full potential has not been seen. Alba still deserves to be a starter in the team, but he has not quite been at the level culés know he can play at. He needs to regain his confidence which saw him be arguably the best left-back in the world at one time.

Meanwhile, Semedo is one of the best defensive full-backs in Europe and signs of him improving offensively have been seen this campaign. He just needs to understand positioning and timing of runs going forward, as well as polishing his final ball. Quique Setién could be the manager to do this. The Portuguese deserves another chance to prove himself and get a consistent run in the team.

❛ In most scenarios it isn’t the man on the ball who decides where the ball goes, but players without the ball. Their running actions determine the next pass ❜

Sergi Roberto has always given everything for the team and has the ability to play in a number of positions. At full-back, he can help to change the game if Barcelona are looking to attack more. His understanding of the way Barça play and positional intelligence is what the club needs. Although he is sometimes caught out of position, this can be the risk when playing with such attacking full-backs.

Finally, Junior Firpo does have potential and has proven he can compete in La Liga while at Betis. He was used as a left wing-back more than a left-back, though. He needs time to adapt to the club and a consistent run of games to gain the experience and confidence to play at first team level. Notwithstanding, with Alba almost an undisputed starter, it might be difficult to do so. If Firpo is just going to play sporadically, then he will not likely improve much and the board must consider this. All footballers need consistency in their game time if they are going to improve as players.