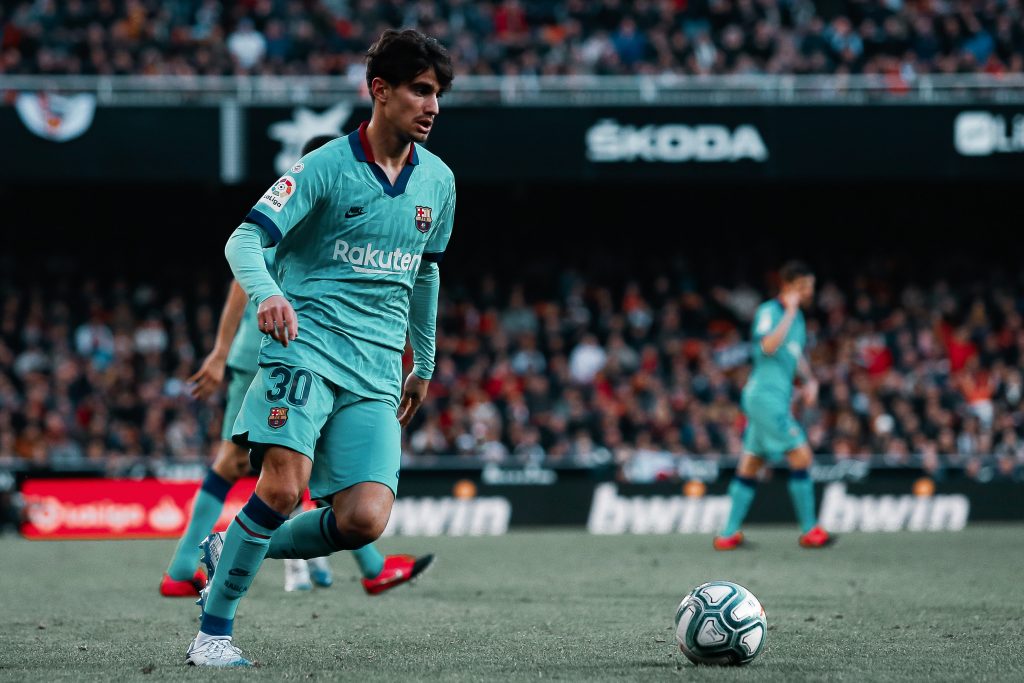 On Thursday Barça B have announced the injury of 21-year-old prospect Álex Collado, who will be out for 12 weeks and will miss the play-offs for promotion to the Second Division.

Some of the worst possible news for Barcelona and Barcelona B have been revealed by the club this morning. Álex Collado, the reserves’ highly promising midfielder, picked an injury in yesterday’s training session with Barça B that will rule him out for the next 12 weeks. In particular, he suffered a stress fracture of the metatarsal of his left foot. His golden and exquisite left foot.

A left foot that he usually uses to produce moments of magic through games, to pull the strings with his delightful and pinpoint technique, and to exhibit all his quality and potential. Álex Collado is a natural midfielder or interior, but his outstanding creative output, ability to carry the ball, playmaking and even shooting skills, and also acute positional expertise have allowed him to move to the wing position often during the past two seasons for Barça B.

García Pimienta’s Barça B has greatly stood out this season through the full and effective implementation of all the concepts of the positional play. For Barcelona’s trademark style, extreme intelligence and technique to operate in tight spaces is required in all areas of the pitch. Particularly, Jandro Orellana, being promoted from the Juvenil A, has established himself as the team’s pivot, while Riqui Puig and Monchu Rodríguez have taken up the central midfield spots. Therefore, Collado has been frequently deployed on the right wing this campaign.

This does by no means that Álex is not capable of standing out in midfield. In fact, that is his best position and he feels veritably comfortable there. But for the squad’s needs and structure, Collado has displayed his versatility and ability to seamlessly move to the right flank as if he was a natural winger. Making the accurate off-ball movements, providing his touch of class and inventiveness on the ball, and cutting inside to create, the La Masía product has been truly fundamental for Barça B.

Like in the 18/19 term, in which he was superb already, in the present season he has made just another step forward in terms of maturity and may well have been coach Pimienta’s most valuable player. It is true that his partner in crime Riqui Puig grabs most of the attention and may have a brighter future in the first team. But if Pimienta was to be asked who he considers most irreplaceable and invaluable, he would possibly mention Álex Collado.

“If he continues with his progression, the one he must have, we hope that he can be in the first team in the near future”

Sadly, such an indispensable piece of the B’s tactics will miss the most important part of the season. In terms of performances and results, it has been an excellent course for the young blaugranas so far. Barça B stood in the second position of the Group 3 of the Segunda B once the coronavirus pandemic caused the football activity to be halted. Thus, this has allowed them to guarantee a spot in the upcoming play-offs for promotion to the Second Division. Taking place in neutral grounds behind closed doors in Malaga, Barcelona B will have to beat Valladolid Promesas on Sunday and then advance two more single-legged rounds to achieve promotion to the second tier of Spanish football.

However, Barça B will have to take on such massive challenge with the absence of Álex Collado, whose injury is a very hard blow for his team and manager. Despite being crucial with five goals and five assists in almost 2,000 minutes with the B this term, the Catalan had only got a single appearance with the senior side this season. It was five minutes in January against Valencia, in a 2–0 loss at Mestalla. Since football returned, Collado had made most of Quique Setién’s first team squad lists, but Álex hadn’t got a single minute of action.

Still, he was undoubtedly going to be key for the reserves in the play-offs, and the club should clearly look to protect one of their brightest academy gems. This injury, though, will not only influence Barça B’s chances of promotion to Segunda, but it will also force Álex Collado to miss the start of the 2020/21 season. A season in which he completely deserved to be promoted to the first team, despite the inclusion of talents like Ansu Fati or the incoming Francisco Trincão and Pedri.

What will Barcelona do with Collado now? Since he will be injured for three months, the chances of him leaving on loan are almost completely ruled out. An option would be to promote him anyway, but he would need to be guaranteed minutes in his return from injury, which is not so certain in the A side.

Álex Collado, in spite of his most recent injury, has done more than enough to earn a spot in the first team of Barça | Photo by Imago

Thus, what is most likely is that Barcelona will repeat the same formula applied to Carles Aleñá after his serious injury at the end of the 17/18: Álex Collado will continue to be a Barça B player at the start of the upcoming campaign, but if he starts getting playtime in the first team he will be permanently promoted. This depends on who the senior coach is, whether the five substitutions are allowed…But Álex deserves a spot in the senior squad.

Álex Collado, García Pimienta, Barça B and Barcelona fans all cry in pain after such unfortunate injury just three days before the play-offs for promotion to Segunda. But now, Collado must start preparing for his recovery, while the club must make sure that they treat him and his potential in the best possible way. Such delightful talent must not be wasted, neither for misfortune nor for bad decisions.