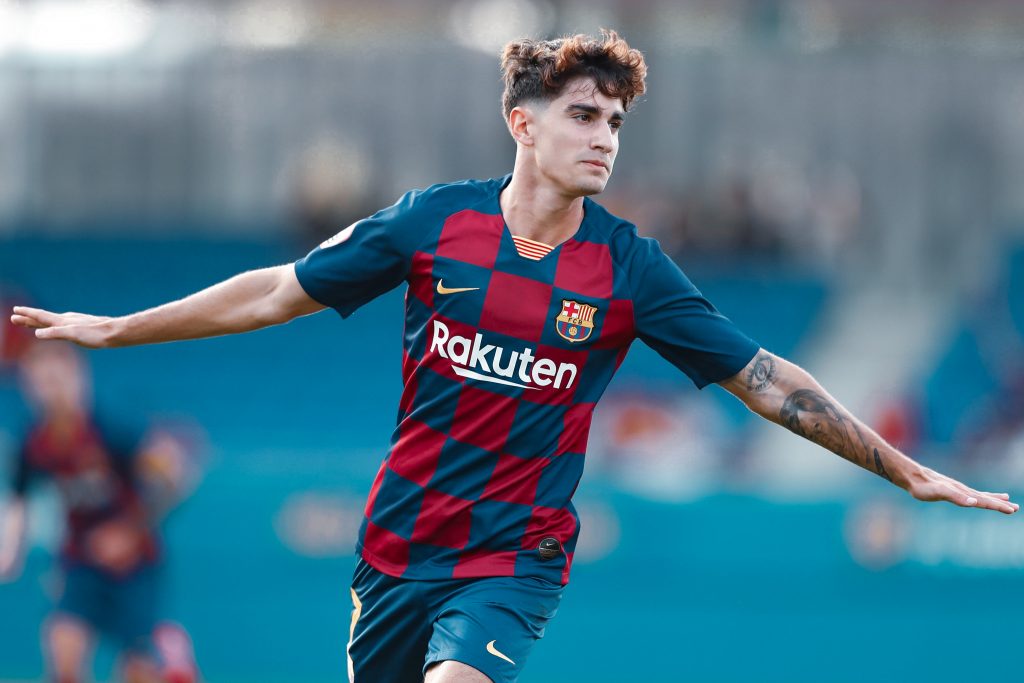 Álex Collado, an artist between the lines for Barça B, is ready for the step up as the club is expected to hand him a renewal until 2023.

Riqui Puig has undeniably been shining with his own light at Barça B. Ever since he made his debut with the first team in the 2018 preseason tour, all eyes have been focused on the tiny midfielder from Barça B. However, all this attention seems to have pushed other players away from the spotlight. Álex Collado, in particular, has been dancing on the pitch in spite of him not getting even half as much praise as Riqui after every game. Collado is García Pimienta’s most trusted man at Barça B, and a true artist that is ready for the next step.

Álex has a golden left foot, one that allows him to take silky touches as he moves between the lines and pulls the strings with his passes and dribbles. While a natural midfielder or interior, at Barça B Pimienta has mostly deployed him as a winger. With Monchu and Riqui often taking the midfield spots, over these two seasons Collado has been acting frequently as a left or, especially, right winger. Despite this not being his natural position, he makes it seem as if it was. His delicious technique joins his capacity to execute the movements a normal winger would be demanded to make. So, instead of being a hybrid between a midfielder and a winger that falls short in both spots, he performs with ease in all these roles.

And this is a blessing for any manager. It has been so for Pimienta, and it could be for Quique Setién. While the 21-year-old has been called up several times this season due to the absences upfront, Collado has roughly played 90 minutes with the senior side in total: 84 minutes in his debut last term against Celta, and 5 minutes in a cameo appearance against Valencia in January 2020. Like Riqui, he deserves much better than this. The board is continuously arguing about their lack of experience, but it is time that they start focusing less on what’s in the market and more on what they already have at home.

And Collado, without fear of being wrong, is completely ready to make it into the first team. In his last two or three years, if we include the Youth League-winning campaign in 2018, the Sabadell-born player has been growing in leaps and bounds. Not only is he extremely gifted, but he has been gaining more and more consistency and importance under Pimi. Undoubtedly one of the footballing leaders of the B, Álex has been making an impact on his side on a regular basis rather than simply showing glimpses of his quality.

Collado is talent, technique, imagination, virtuosity and elegance. He has some touches of genius, of being filthy and ruthless. But, apart from that, he is extremely smart and permeable. He can drop deep, offer runs in behind, stay near the touchline, come inside…Both magical and positional astute. Even if Trincão can apparently have a similar profile, and obtaining minutes won’t be easy, Collado’s expertise in midfield and his need for no adaptation to Barcelona’s style could give him an advantage. Regardless of who arrives, giving minutes to the La Masía talent should be a priority. Not for a matter of romanticism, but simply because he is completely prepared and deserves it like few others.

Now, with games expected to take place every three days between June and July, and with the new rule allowing 5 substitutions per match, Setién could use Collado to rotate his stars. Like Riqui Puig, Monchu, Iñaki Peña, Araújo and obviously Ansu Fati, Álex has been training with the first team – individually – these days. According to Mundo Deportivo, Barça have already told Collado that they want to execute the option to extend his contract from 2021 to 2023. Player and directives are expected to sit down and negotiate the conditions of the new contract, but the youngster is calm and confident.

Collado would like more playtime at the club he arrived in 2009 as an Alevín B. Setién likes Álex, who would like to get more minutes with the senior side this campaign and go on preseason with them in the summer. He does not want to make a rushed decision, though, and will accept one of the many loan offers he has on the table in case he’s not granted enough playtime. However, his dream is to stay and get promoted, and he unquestionably deserves to be handed that opportunity.