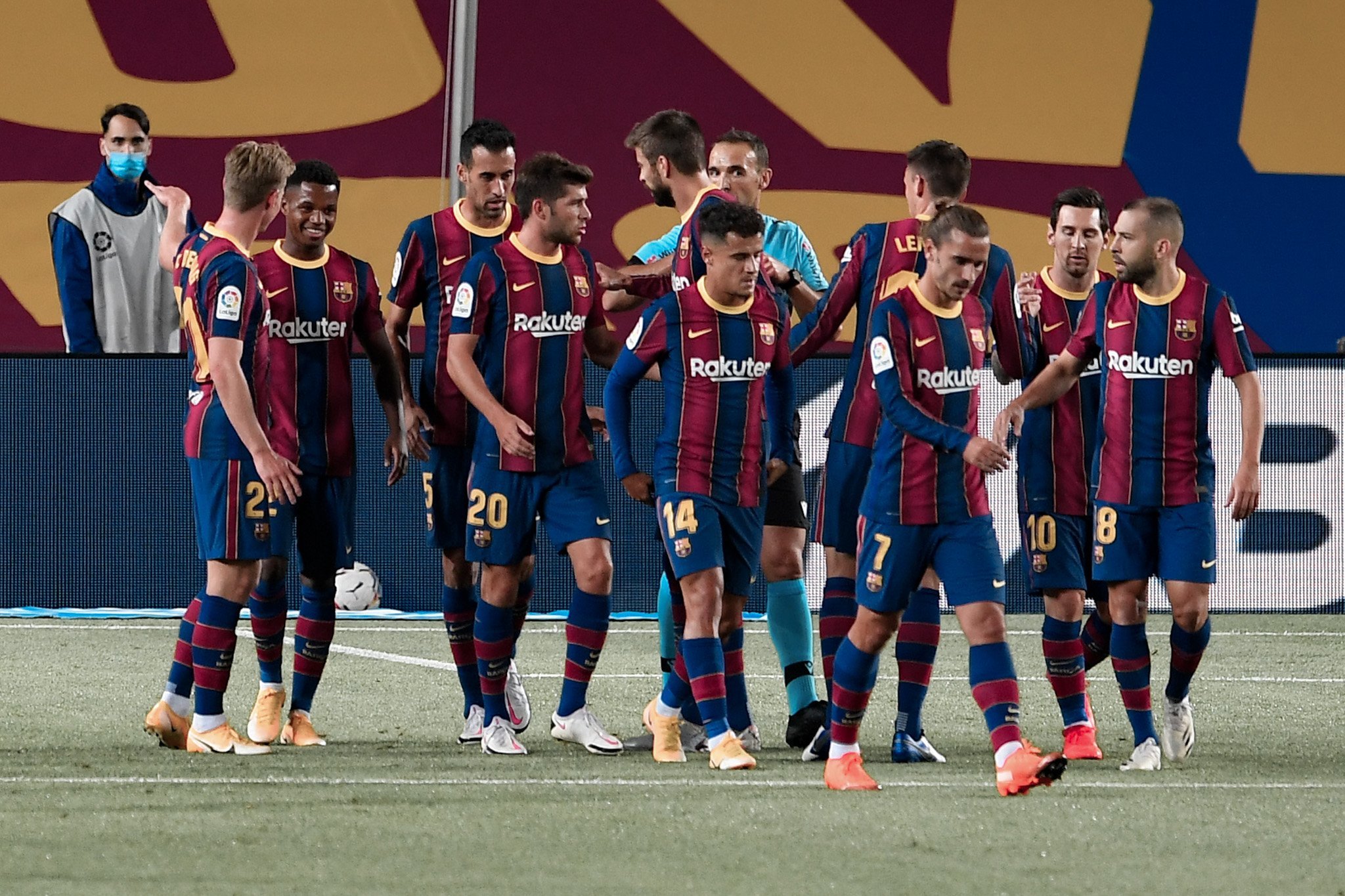 Finally. It was high time the transfer came to a close, for it seemed a rather long and dreary one. Not that it brought with it any bad news or implications, in fact, it was a positive one for many reasons. Yet, many cules found this window mentally draining alike. When an offload was announced after the humbling defeat in Lisbon, Barcelona faithful knew they were in for an exhausting window. And exhausting it has been, right from the news of Messi’s departure till the deadline day transfers of Rafinha Alcantara and Jean-Claire Todibo.

Now with the window closed, the squad has a completely new look. Many familiar faces have bid us adieu. Concurrently, the influx of younger players has instilled a new competitive fire in the team. On a sporting level, it was an emotional yet positive window. However, looking at how the board managed the window financially may evoke some grinding comments. There were positives and a fair share of negatives too in what was an important 2 months. Here is a quick review of the changes the Camp Nou has witnessed:

The transfer window announced itself in Catalonia much before its actual commencement. It was in late June that Arthur Melo was suddenly linked to a move to Turin. Reports suggested the Brazilian was being forced out, with Miralem Pjanic arriving at the Camp Nou in exchange. It was an operation carried out for €72M euros with €10M in variables. However, the Catalans offered back €60+5M as part of the deal for the Bosnian midfielder. A deal made to balance the books as widely reported. However, a deal that is now not criticised as much as it was initially.

The rest of the script wrote itself after a certain 8-2 defeat that shook the city up. The sacking of Quique Setien and the subsequent arrival of Ronald Koeman was the spark that initiated a wildfire. The Dutchman started on his job without any delay. He immediately prepared a list of players he did not count on. A list that included the names of Luis Suarez, Arturo Vidal, Ivan Rakitic and Samuel Umtiti among others.

The first of the mass exodus was the home-going of Ivan Raktic back to Sevilla. The Croatian’s departure was announced on the first of September, as a deal involving a token of €1.5M with up to €9M in variables.

Arturo Vidal was the next in line. A reunion with Antonio Conte interested the Chilean, and a move to Inter Milan seemed just within reach. However owing to complications in Godin’s departure to Cagliari, his move to the Italian city was delayed even after the clubs had reached an agreement. On 22nd September, Barcelona announced the departure of the 33-year-old for just €1M in variables.

Luis Suarez’s exit was probably the most chaotic, but emotional of the 3 major departures. Initial links to Juventus seemed to be very strong, with the Uruguayan also travelling to Turin for a passport. A delay in the same however curbed the deal, and Atletico Madrid rushed in for the man Barcelona had deemed unnecessary. With just €6M in variables, Los Rojiblancos pulled off a steal. Contract termination was not how one expected El Pistolero to leave the club, however, that is what it came to.

The fact that Barcelona got just €1.5M and up to €16M in variables from 3 players who were undisputed starters reflects the poor business from every angle. Having publicly declared the trio unnecessary removed any chances of attracting higher offers. It is no secret that the departures were necessary, not only at a sporting level but also to lighten the wage bill. However, a better business could have probably been done.

From a financial point of view, the transfer of Nelson Semedo to Wolves was the biggest talking point. The Portuguese left the club in a deal close to €40M, providing necessary funds for the club to pursue their transfer targets.

In other departures, Getafe activated their purchase option on March Cucurella for a sum of €10M. Rafinha Alcantara who found himself frozen out of the squad since Koeman’s arrival found a new home at Paris Saint-Germain on a free deal. Further deadline day drama saw Todibo leave on loan to Benfica with an option to buy.

Barcelona had started their work on arrivals much before the commencement of the window. The signing of Fransisco Trincao was announced in January, in a deal worth €31M. Another early deal with Las Palmas saw the Blaugranas acquire the services of the 17-year-old talent, Pedri for €5M.

Miralem Pjanic arrived at Barcelona in a deal that saw Arthur Melo go the other way. The move was initially met with a very turbulent response, splitting the fanbase. Despite being finalised much before the Dutchman’s arrival, it turned out to be a transfer that played right into Ronald Koeman’s plans.

After a treble-winning stint at Bayern Munich, Phillipe Countinho returned to the Catalan capital after the German champions did not exercise their option to buy. Koeman is said to have personally contacted the Brazilian to let him know that he counts on him. A return that may pay off well for Barcelona. Similarly, Carles Alena returned from his loan spell at Real Betis, further bolstering the midfield options.

Semedo’s departure opened up a vacancy at Right-back which needed to be filled at the earliest. Despite Bayern Munich being to pole position to finalize the signing, Barcelona jumped into the race for Sergino Dest. The friendly relation with Ajax and the player’s desire to don the Catalan colours saw Barcelona wrap up the signing. On the 1st of October, the club announces the USMNT Right-back’s arrival in a deal involving €21M+5M.

Other signings included Matheus Fernandes from Palmeiras in a deal worth €10M. The player is yet to be presented, however, reports suggest he is to be a first-team player.

Deals that did not go through:

One has to start the discussion with the club captain. Unable to see a sporting project at the club, the Argentine took the decision to leave the club. Despite sending an official Burofax requesting a contract termination, the club blatantly refused any such operation. Despite being keen on a move to Manchester City, the captain revealed that he would stay at the club to see out his contract. In what was an extraordinary interview, he revealed he was being forced to stay against his will, but would still give his all for the club.

Despite strong rumours revolving around Lautaro Martinez, Barcelona never stood a realistic chance of signing him. Inter Milan’s demands were just far too high given the Catalans economic status. He stays at the Italian capital.

Despite continuous reports around Memphis Depay, Wijnaldum and Eric Garcia to Barcelona, none of the deals materialised. The deals were always subject to key departures, which did not materialise from the Blaugrana’s side. With a very limited budget, Barcelona could not make any concrete offers. While Eric Garcia seems destined to return home on a free, whether or not the club continues to pursue Depay is yet to be seen.

Samuel Umtiti did not attract any offers and continues to receive his wages despite not being a part of Koeman’s plans. Ousmane Dembele too stays despite receiving solid interest from Manchester United.

The mass exodus of players cleared up first-team spots, which have rightfully been given to deserving prospects. Ansu Fati was the first player to receive an official first team number, and will now don the #22 shirt. Ronald Araujo gets the #4 shirt, while Carles Alena takes the #6. Despite reports of a move out on loan, Riqui Puig stays. He too has been promoted and will wear the #12 shirt.

This window will go down as one of the biggest, and most important transfer windows in the club’s recent history. We thank all the departing players for always giving their 100% on the field, and wish them all the best for their future. At the same time, a warm welcome to all the incoming players, who will hopefully bring the club back to its former heights. For the sporting project, it was a positive window. However, I leave you on the thought that it could have been a very different story if we milked more transfer fees from the outgoing players.