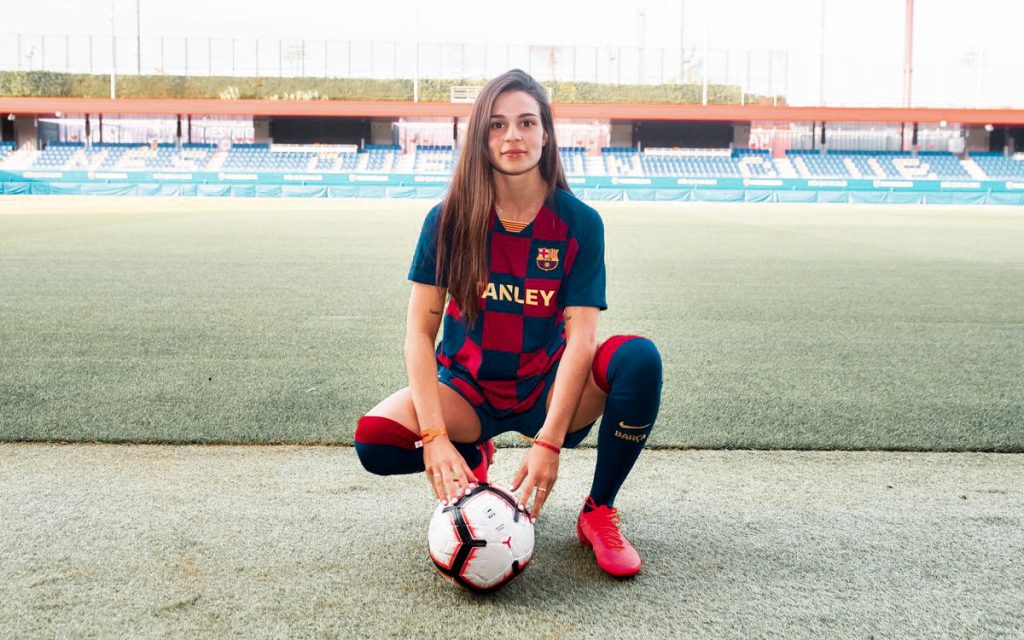 As Barça Femení announced the signing of 17-year-old right winger Giovana Queiroz on Friday, we analyse her trajectory and playing style.

This summer has been pretty quiet so far on the transfer front for FC Barcelona Femení. After most of the club’s transfer targets ended up signing for teams elsewhere, it was unclear whether or not Barça Femení were going to sign any players this summer.

But all speculation was put to rest when the club announced the arrival of forward Giovana Queiroz on Friday 17 July after reaching an agreement with Madrid CFF. Giovana had a contract with Madrid CFF until 2022, and Barcelona paid an undisclosed transfer fee for her services. The young Spanish–Brazilian will be decorating the Estadi Johan Cruyff this coming season at only 17 years old and has immaculate experience despite her young age.

Giovana was born in Brazil, later moved to the United States and finally settled in Spain. Versatile and with exquisite technique, nicknamed Gio, she has been an international in the lower categories of Brazil, the USA and Spain. These experiences with this many different team set-ups and environments show her versatility, a valuable asset for any player.

“My reference is the Brazilian Marta. It’s been a long time since I started following her and I really like how she plays“

Giovana Queiroz
after signing for Barça

After announcing the renovations of key pieces of the youth squad, Giovana Queiroz arrives in Barcelona to reinforce one of the most illustrious sections of the club. Despite her young age, Queiroz has already gone through the youth ranks of Atlético de Madrid. She debuted for Madrid CFF at just 15 years old in the Primera Iberdrola against Barcelona on 9 December 2018. Being the youngest of the competition, the forward played a total of 13 matches the previous season, nine of them as a starter for Madrid CFF.

With her arrival at the Estadi Johan Cruyff, Barça Femení continues to secure their future. Like the recently renewed Bruna Vilamala, Claudia Pina, Carla Armengol, and Candela Andújar, despite the latter three will be leaving on loan, the presence of Giovana Queiroz allows Barcelona to continue betting on a bright future on the attacking front.

Queiroz mostly plays as a right winger for Madrid CFF and Spain U–17. She is known for her speed and tenacity in the final third. Queiroz is a player who can run on the right side of the pitch for 90 minutes and who won’t stop tracking back when needed in defense. When she debuted against Barcelona in 2018, she outpaced Mapi all the time and was a thorn for the defence on the vulnerable left side of FCB Femení.

She often likes to get behind the defence and try getting one-on-one with the goalkeeper. Her pace and determination in holding the ball is something that needs to be watched out for. She has an excellent eye for goal with an incredible work rate. She is well rounded and clinical in front of goal, making her a threat in the final third.

You can watch some of her best moments from 2018/19 season here.

Barcelona Femení B looks thin in attack with the departure of Teresa Tere Morato and Alba and with the loans of Claudia Pina and Carla Armengol. Gio can play as a right winger, replacing Tere, who already left the club at the end of the last season. Gio also seems to be the perfect replacement for Pina, as she is press resistant and can hold the ball in tight spaces. Barça are adding quality players needed to win the Reto Iberdrola once again.

“It is a dream to play for Barça because it is a very good opportunity to keep growing and succeeding. The objectives I set are to achieve a lot of success, hopefully, win it all, and mostly add a lot to the team. To train with people with such great experience will help me grow and will be very helpful for me”

Giovana Queiroz
after signing for Barça

With Candela Andújar already on loan to Valencia and Claudia Pina and Carla Armengol having done so to Sevilla, Barcelona are in need of reliable back-up forwards, especially with the condensed domestic season ahead of them. In terms of her role with the first team, Gio can provide the depth and occasionally some rest for Caroline Graham Hansen.

If everything goes to plan, Gio likely won’t be getting regular playing time with the senior team this season but she can play out the minutes at the end of the matches. Despite the lack of incoming players, things are looking bright for Barça Femení with signings and renewals, and the signing of a talent like Giovana Queiroz only helps bolster a squad with seemingly limitless potential.