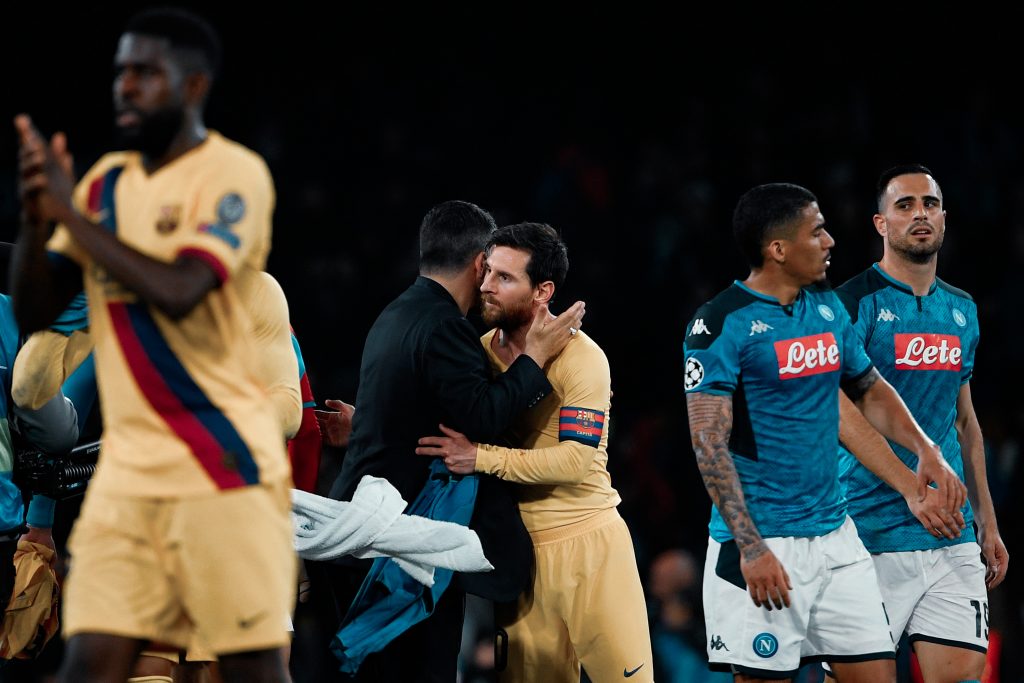 The Champions League draw is done and the path to the finals has now been laid, revealing that Barça will have to face some of Europe’s top pedigree at every stage if they are to reach the final. How do things look for the Catalans?

The whole world anxiously looked on as Paulo Sousa drew ball after ball at the UEFA headquarters at Nyon. Both club representatives and fans around the world watched alike, from the comfort of their localities. With every ball drawn, the framework of the mega event grew clearer and clearer. As always, the Champions League draw lived up to the astronomical expectations it is often associated with. For the neutral football fan, there are some dazzling fixtures scheduled for the next month. Things for Barcelona though don’t look very promising.

A novel format of the Champions League

The world has been going through extremely difficult times. Every country has had to face the brunt of this devastating pandemic. Amid all the chaos, the UEFA along with the cooperation from the national football federations worked out a formula to keep European football going. It was never going to possible to play it with complete normalcy.

After the Champions League draw, Barcelona already know how their path to the trophy looks like | Photo by Fabrice Coffrini / AFP via Getty Images

The committee decided to conduct the entire Champions League in a 12-day event in August. With international travel not being as facile as before, the entire tournament from the quarter-finals stage will be conducted in the Portuguese city of Lisbon. Unlike the trademark two-legged fixtures that the Champions has been known for, this year the games will only be single-legged. Go big or go home!

A massive boost to Barcelona, however, is that the second leg of the round of 16 fixture against Napoli will be played at the Camp Nou. The other changes announced include a maximum of five substitutions at three intervals in the game, and an extra substitution permitted in the event of extra time.

It has been a fairly long while since the glorious Champions League anthem rattled through the stands of stadiums across the world. After a five-month long hiatus, the competition returns and it is necessary to know how Barcelona got where they are.

The Catalans were initially drawn into Group F alongside Inter Milan, Borrusia Dortmund and Slavia Prague. It was certainly the most difficult group on paper, and the fixtures testified. The blaugranas remained unbeaten throughout the group stage, winning four of their six fixtures. They pulled out some stunning displays like the 3–1 win over Borrusia Dortmund at home. At the same time, there were some not so pretty fixtures, particularly the goalless home draw with Slavia Prague. Barcelona finished at the top of the group.

At the round of 16 draw, the European giants found themselves drawn against Gennaro Gattuso’s Napoli. The first leg at the city of Naples was an enthralling night of football. Antoine Griezmann’s precious away goal cancelled out Dries Mertens’ opener before Arturo Vidal was sent off in the 89′. After the 1–1 at the Stadio San Paolo, both teams prepare to face each other on Saturday 8 August at 21:00 CET for the second leg.

The Champions League path from the quarter-finals for Barcelona looks to be a doozy. But it is all based on one assumption: that they overcome the test against Napoli at the Camp Nou. The San Paolo Stadium in Naples witnessed an extraordinary night of football with both the home side and their Spanish guests taking part in a gritty battle. Barcelona came back home with an all-important away goal scored by their star signing from the summer, Antoine Griezmann.

“First we must focus on beating Napoli. We will play at home, which is fair. It’s good to know our future opponents”

SSC Napoli currently sit sixth in the Serie A, and are on a good run of form. They took down the mighty Juventus in the final of the Coppa Italia to take home the silverware. It would certainly be foolish of the azulgranas to take Gattuso’s men lightly. They will also be without the services of Sergio Busquets and Arturo Vidal, through suspension, and Martin Braithwaite, who isn’t registered to play in European contest. The game at the Camp Nou will be a test of strength, both physical and mental. All that can be said right now is that Barça do not have their ticket to Lisbon yet.

The team that comes on top at the Camp Nou has been drawn against the victor of the clash between Bayern Munich and Chelsea.

After the first leg at Stamford Bridge in February, Bayern Munich hold a three-goal lead over Frank Lampard’s Chelsea. More importantly, a three-away-goal lead. In the Champions League, the first rule is to never write a team off. Chelsea on their day can rip through opposition defences with their combination of talented youth and experience. However, the chance of that happening is bleak indeed.

With the domestic double sealed, Bayern Munich now aim at the second treble in their history | Photo by Michael Sohn / Pool via Getty Images

The Bundesliga and DFB Pokal champions have all eyes set on the treble. After an extremely rusty start to the campaign and a managerial change in the process, they look in better form than ever. With manager Hans-Dieter Flick they are unbeaten in their last 26 games across all competitions. The team has been scoring goals at free will, with Robert Lewandowski enjoying one of his most stellar seasons to date.

Barcelona’s recent history at the European stage has not been very pleasant. Facing a team so high in confidence would be a difficult hurdle to get past. There is no doubt that the team has the quality, but do they have the mindset to see them past the German champions? No doubt, it will be a very difficult hurdle to get past. Nevertheless, it is only 90 minutes of football that decides the fate of a team. Neither side can be written off.

The first quarter-final tie of the Champions League will be played between the winners of the Manchester City vs Real Madrid and Juventus vs Olympique Lyonnais. A battle of the giants indeed. As things stand, Man City has a 2–1 lead over Los Blancos, with captain Sergio Ramos suspended for the return leg at the Etihad Stadium. One would expect Pep Guardiola’s side to go through, but Zinedine Zidane’s men can never be written off.

Elsewhere, Juventus, who haven’t been in the best form themselves lately, are a goal down against Olympique Lyonnais. It is anyone’s game to win, and thus it is difficult to make any prediction.

If Barcelona makes it to the semi-final, they could face any of the four clubs, all of them steep mountains to climb. Manchester City has been rejuvenated since the return of football, even seeing off Premier League champions Liverpool in a dominant 4–0 victory. Real Madrid have not dropped a point since the return of football and have virtually sealed the La Liga title for the season.

Juventus have been in quite a poor form, and haven’t hit their stride yet, but expect them to stand up and deliver when it matters. Underdogs Lyon are always a low key threat. A physical side that knows how to soak up pressure and hit on the counter, exactly the type of team Barcelona often loathe.

On the other half of the draw are Atlético de Madrid, Atalanta, Paris Saint-Germain and RB Leipzig. The favourites to reach the finals may indeed be the kings of France PSG, who have a relatively easy route to the finals, at least compared to the other bracket.

At the same time, this could also be the year of redemption for Diego Pablo Simeone. After a rather underwhelming season, Atlético de Madrid found their stride after annihilating Champions League winners Liverpool in their own backyard. They are undoubtedly the dark horses to this year’s trophy.

Barcelona’s recent history in the Champions League has not been very charming for its supporters. If an easy draw is what culeé were hoping for, it is most certainly not what they wanted. If Barça are to lift the trophy this year, it will be a long and gruelling path. Every hurdle gets bigger than the previous one. With the topmost European sides waiting for the Catalans at every step, a captivating journey begins. It is most certainly not impossible, but it will need a herculean effort which the team is certainly capable of.

• How the passing of Lionel Messi has changed over the years