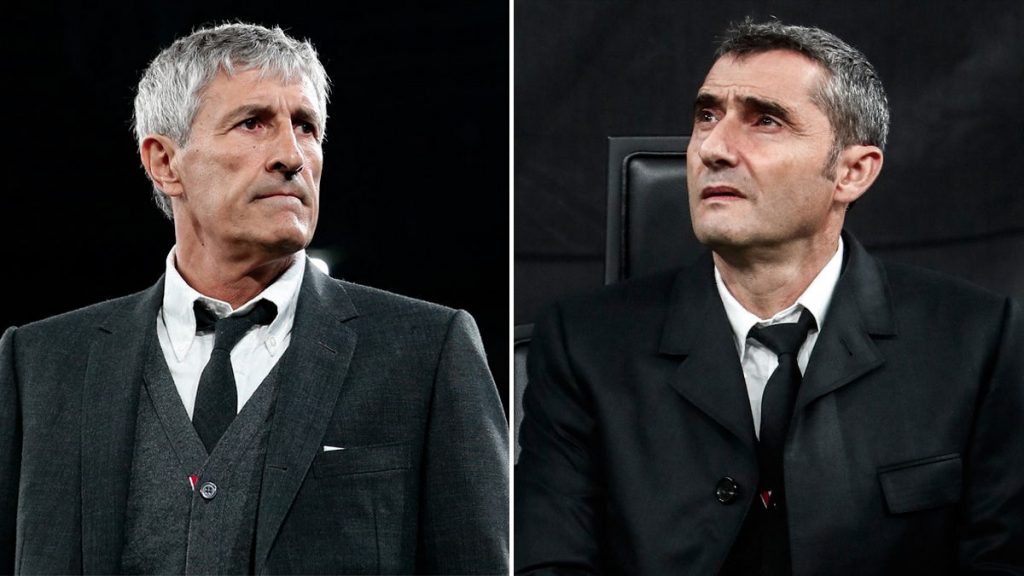 Hopes were challenged, trust was fading. But Ernesto Valverde was there, where Bartomeu wanted him to be and no Blaugrana fan wanted him to stay. That was the beginning of the 2019/2020 season at the Camp Nou. While the feelings weren’t particularly light towards Barça’s manager, Leo Messi’s usual words before the Gamper Trophy had the supporters gain some confidence again after another unreal debacle in the Champions League. For the second time in a row. You could sense the fans’ frustration in the air.

However the situation, Valverde began the season with the full support of the roaster, having the older and most experienced players behind his back. A mutual feeling that lasted as long as Valverde’s journey with Barça. Once Setién got in charge of the team, a few resentments changed. Pretty quickly too, I should add. But analyzing the two managers’ season could be less understandable than what it could seem.

While they both had the same number of games managed in La Liga this season, the former Real Betis’ coach had gained a couple more points than the first one. And even though it could seem an easy situation to get into, it is also easy to make conclusions faster than expected. Ernesto Valverde and Quique Setien had two different halves. Different in numbers, in style, and in personality. Different.

Solidity has always proved to be an ally for Valverde in his career, Barça included, while quality was the main feature that characterized the style of Setien. One wanted to win with any mean whatsoever, the other wanted to impose a specific style to the team. Two completely different perspectives. Well, two failed ones. At least this year, since both of them, brought just inconsistency and mental weakness to the team as a unit.

Despite the pragmatism of El Txingurri and the continuing search for the beauty of Setién, both managers gave Barça the complete opposite of what football enthusiasts expected them to give. With two things in common: inconsistency and arrogance. With both coaches having issues in finding a suitable and permanent tactical and psychological approach to games, especially those away from the Camp Nou, they still found the way to reverse engineer their own philosophy. That is how Valverde became senseless and careless (tactically speaking) and Setien stubborn and overconfident.

As if there weren’t enough doubts before, Valverde began his season with a few more: “Where should I place Griezmann?”, “Who’s going to lose his place in the midfield zone?” and even “Leo’s injured. Now what?”. Lots of questions that he had to answer, somehow. While he still made the Frenchman score for the first time playing him in his natural role, Valverde was never able to solve the puzzle with him. And about this aspect, it is fair to say that nobody did.

Even Setién had issues with the placement on the pitch of Griezmann and, even though he seemed to have found a spot for him towards the end of La Liga, especially with that Villarreal game, the Frenchman got injured and we really couldn’t conclude anything concrete. One thing is a certainty though: playing the World Champion as a left winger is a waste of time, money, and talent. It shouldn’t have crossed any of the managers’ minds.

And here we come to what should come as a surprise for many. Even if Barça’s last game against Alavés increased the net goal difference, Valverde’s team scored more goals than Setien’s. While the latter one’s game should’ve been buzzing, dynamic, and attacking, it proved to be a flat bubble. No quick movements on and off the ball, no creativity besides the individuality’s ones, no confidence. With 2.58 goals per game average, Valverde’s Barcelona was able to score 4+ goals on six different occasions, while Setien’s team averaged a low 1.95 goals per game, netting a poker once and a ‘manita’ twice. In the last seven months, Barça were literally grasping at straws with those short 1-0, 2-1 wins. Boring. You can call it if you want “involuntary reverse engineering”.

Blaugrana fans expected a thunderstorm with the appointment of the former Las Palmas manager, but they were disappointed in terms of excitement. Both statistically and technically. Even though he had slightly better defensive numbers, with 15 goals conceded against the 23 suffered from Valverde’s times, the goal difference, together with some objective analysis of the team’s performances, clearly outlined how our first half of the season was certainly more exciting than our second one on average, despite both being extremely disappointing to the well known Barça standards.

To all those fans already screaming to “He really said that Valverde’s team was ‘exciting’?!”, calm down. As I emphasized, the original levels we are all accustomed to when we’re talking about Barcelona are quite different from anything we’ve seen so far this season. It’s just like when we compare Messi’s performances and stats: he’s always trapped by his own standards.

Valverde was disappointing. Setien also. But while the first one got an unfair sack in that specific moment, after probably the best display Barça put up this season (Spanish Supercup, against Atletico Madrid), the latter still has time to decide his own future. A future where Valverde’s footprint shouldn’t be underestimated. The world wouldn’t be appreciating Ansu Fati’s talent if not for the Viandar De La Vera’s born coach. He had the guts to believe in the La Masia talent, in the La Masia talents: not just Ansu Fati, but Alena and Carles Perez too, before the board’s foolishness began. And to add some virtues to Valverde, the whole Blaugrana environment had such a faithful relationship with him.

From the senators to the youngest, through the club. Something that Setien hasn’t really gained yet.

The current Barcelona manager has a chance now. His chance to shock the world and to gain the respect his football wants. With a Riqui Puig more, which he had the intelligence to gave him the trust he deserves, with fresh legs on the pitch and skills on both ends of the field of play, the game is on.

Setién, the past is already gone. The present is on you to develop the right strategy. The future could be yours to live. Change the temperature of this heat, make it your own. “One chance, one opportunity.”