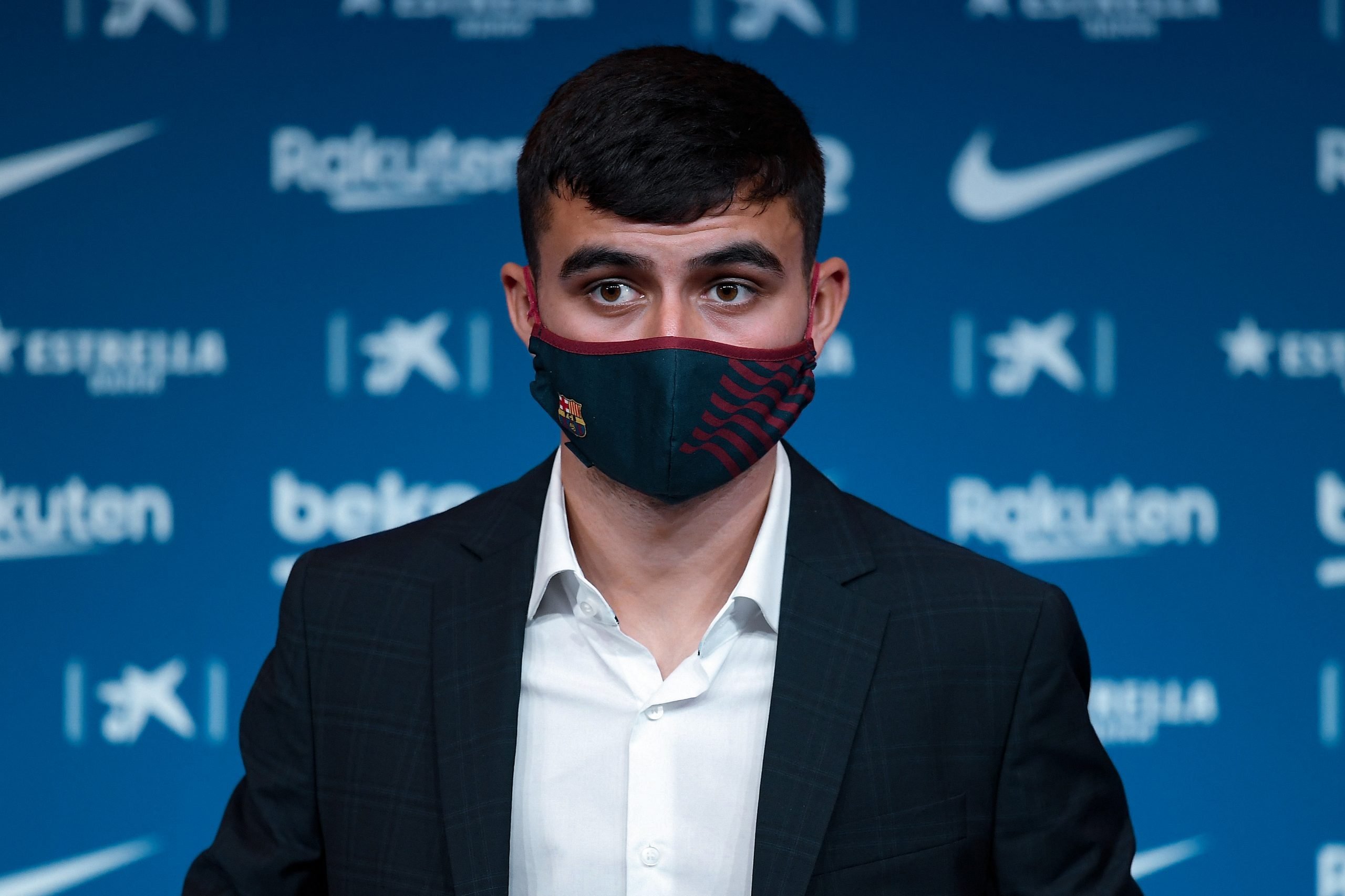 In September 2019, Barcelona paid 5 million euros to secure the services of Pedri, who would have a standout debut 19/20 season with Las Palmas at 17. In this article, we analyse the attributes and main statistics of the young and extremely promising attacking midfielder.

This is the first episode of a series of articles that dive deep into a season review of the incoming new faces at Barcelona. You can check the 19/20 season reviews here.

As Ronald Koeman‘s new Barcelona is already taking shape, the youngest member to be joining the first team is Pedro González López, affectionately known as Pedri.

The 17-year-old from the Canary Islands has been a member of UD Las Palmas through and through, right from the youth team set-up to his professional debut in 2019 with the first team. Playing primarily as an attacking mid or left winger, Pedri showcased his attacking repertoire early enough to become an important member of the Las Palmas senior team and went on to play 2982 minutes for them.

His skillset didn’t go unnoticed at the bigger clubs, and soon enough, he was snatched up by Barcelona. So, what does the young midfielder bring to the table?

Pedri was, admittedly, not the biggest goal threat in his first senior season, but given his age, that’s not an issue at all. He scored 4 goals and gave 5 assists.

Watching his shot videos and looking at his shot-map, one can conclude that he does need to work a bit on the judicious choice of positions from where to take shots. For example, there were a bunch of shots from the right with his right foot – shooting from such acute angles is quite unnatural for someone who is not a natural goalscorer. There are also far too many shots from outside the box, most of which, as the videos suggest, are hopeful punts than accurate attempts.

Given below are a variety of his attacking stats – both the raw value and the percentile (mentioned inside parentheses) when compared to other wingers or attacking midfielders who played at least 1000 minutes in the Segunda División of Spain last season.

While most numbers appear to be modest, do keep in mind that this was a 16-year-old playing his first professional season. And his assists, expected assists (xA) and dribbling percentiles are particularly encouraging. It shows he is not afraid to take risks, and we are going to get more glimpses of that further into the article.

But before we proceed, let’s take a look at an animation of the only goal he scored from outside the box:

It was a well-struck fist-time half-volley into the left bottom corner, giving Las Palmas a 1–0 home win against Sporting de Gijón in September 2019. It also marked Pedri’s fist goal as a professional.

A big issue that plagued Barcelona all season was an uncoordinated and lackadaisical defensive effort put in by the team in general. Very little defensive activity by Luis Suárez and Lionel Messi led to Barcelona effectively defending with nine men. A lot of old men in the midfield in the form of Sergio Busquets, Ivan Rakitić and Arturo Vidal also meant that the necessary speed to catch up with fast breaks was lacking as well.

All these afore-mentioned midfielders are very fine players – some of the top midfielders in their prime – but have grown old and lost a bit of their zip, which is much needed in the midfield right now. Meanwhile, Frenkie de Jong is very athletic, and Riqui Puig is deceptively fast, and both of them put in decent defensive numbers. And Pedri should complement them well were these three to take the field in a game together.

Pedri put in a good amount of defensive work for Las Palmas. Browsing through his videos, one can immediately conclude that Pedri is deceptively fast as well and good at reading runs, and he times and angles his own runs to cut the opponents off in their tracks and win back the ball.

Shown below are a variety of his defensive stats. Except for aerial duels – understandable as he is only 177 cms tall –, he ranks very high at every other metric:

Next, let’s take a look at Pedri’s passing characteristics, as shown below.

Pedri was highly involved in the attacking build-ups while maintaining a pretty decent passing accuracy for an attacking midfielder/winger hybrid. He played a lot of forward passes at decent accuracy – something that should bring smiles to the faces of the fans. The teenager is definitely someone who is not shy at taking risks and will mix it up with a decent range of long balls as well. Pedri played around 9 forward passes per 90 minutes, around 8 back passes per 90 minutes and the rest were lateral.

Once again, his video clips make it clear that he attempts to progress the ball and be vertical whenever possible, and the data corroborates that. But here comes the highlight of the article: his keypassing numbers.

What should be clarified right away here is that “dangerous passes” is a nickname I am using for all sorts of progressive and productive passes. This includes passes that lead to shots, assists and pre-assists, progressive passes etc. Let’s have a look at his numbers:

Here we see his greatest asset: his passing abilities to do something productive. And Pedri is outstanding at almost every single category. He ranks very highly in productive passes (which are passes leading to shots + 2nd assists + 3rd assists), passes to the final third and the penalty area, through balls, deep progressions and progressive passes, while also maintaining a reasonably good accuracy at each kind of pass.

This is arguably what attracted Barcelona, and the club will be well served by a passer who is already at this stage of calibre at such an early age. Let’s take a deeper look at his passes that led to shots and goals:

14 of his 19 key passes were into the penalty area – arguably the most dangerous area to take shots from. Only one of the key passes is a corner kick – everything else comes from open play, which is encouraging.

Watching the videos, three of the key passes that end outside the box came from fast breaks – counter-attacks – where Pedri carried the ball upfield from deep and laid it onto the path of his teammate, or found his teammate with accurate long balls from deep. So, even though they were far from the box, they led to extremely dangerous plays by Las Palmas.

Focusing on just the assists, it is easy to see how Pedri combines his speed at ball-carrying with his silky dribbling skills to get past opposition and create crucial amounts of space before finding a teammate with a laser-accurate pass:

And as a special gift to the readers, here is an animation of the assist that happens at the top right corner of the pitch in the viz above. Pedri makes a well-timed run to latch on to his teammate’s pass outside the box, before pulling off an outrageous piece of skill to dribble past his marker with a ‘Berbatov-flick-and-turn’, runs into the box and lays the ball off through two opposition players for his teammate to smash a goal in.

Pedri is an absolute gem, and along with Ansu Fati, Riqui Puig, Francisco Trincão and Frenkie de Jong, may well end up forming the core of a youth-based team. As such, Barcelona will do well to hold on to him and nurture him well. After an already promising – unofficial – debut against Nàstic de Tarragona on Saturday, culés can only hope for him to have a great season and future ahead.

Acknowledgements: I would like to acknowledge the contribution of Samuel Gustafson, writer at Barça Universal, in collating the data and the videos used in the above article