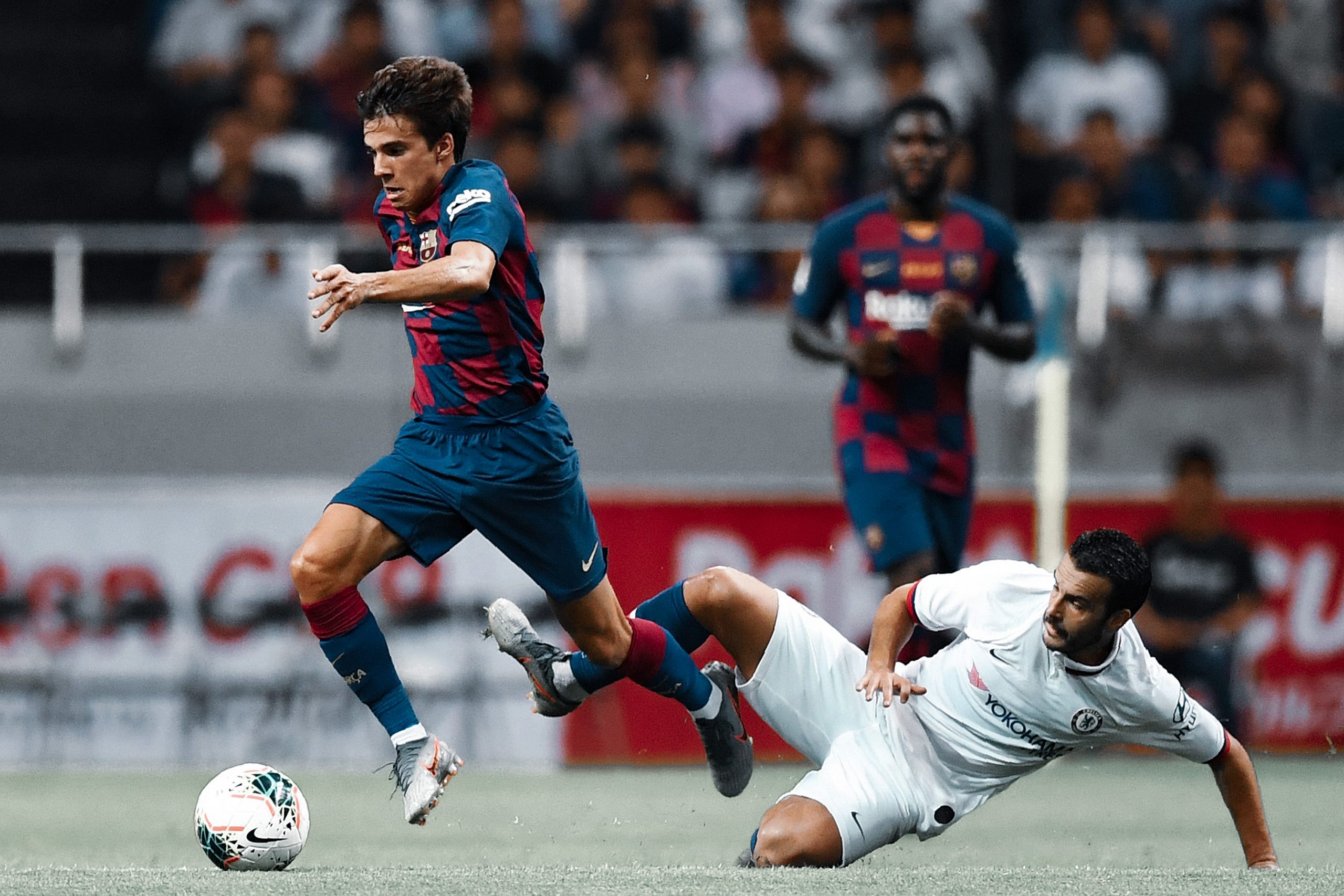 While it wasn’t until the second half of the 19/20 season that La Masía gem Riqui Puig started playing regularly with Barcelona’s first team, the signs are very promising for his future.

This is the eleventh episode of a series in which we review the performances of the different Barça first team players, as well as discuss their futures for the next campaign. You can check the series here.

The world of football suffered heavy losses as the COVID–19 pandemic brought an abrupt end to various football events across the world. However, for a certain La Masía gem, the tightly scheduled and burdensome La Liga timetable caused him more good than harm.

Riqui Puig, the born and bred La Masía prospect, was one of Barcelona’s shining stars after the restart, proving to be a breath of fresh air amidst all the chaos. With senior players requiring rest on a more frequent basis and Frenkie de Jong injuring himself early on, Puig embraced the once-in-a-lifetime opportunity to dazzle Barça’s vast audience, which he did with utmost ease and confidence.

The 21-year-old may have recently experienced a drastic spike in supporters, but in actuality, he had already been fan favourite at the club. Culés were vastly familiar with the talents young Riqui possessed and those who followed him closely at the B team were anxious to see his rise in the first team. After years of waiting and biding time, the 19/20 campaign finally provided the youngster to showcase his talents to the footballing world on a more consistent basis.

Despite Barcelona failing miserably to challenge Real Madrid in the title race, Riqui’s breakthrough in the first team was a massive takeaway and a statement to all those who were begining to write off Barcelona’s ability to produce modern day midfielders. While Ansu Fati may have warranted himself a great deal of hype and admiration, Puig didn’t let the big occasion faze him as he exhibited his innate capacity to thrive on the big stage.

Although the end result for Puig’s season was far from what he initially expected, the journey towards the first team wasn’t an easy road, considering he was practically shunned out of the squad in Ernesto Valverde’s gloomy era. Riqui, after a bright preseason, scarcely received the opportunity to feature with the big boys.

Albeit interfering with his progress at Barça B might not have been wise, there were moments where Riqui’s spark and charisma was desperately required. But due to his inexperience, Valverde hardly ever bothered to give him an out and out opportunity in the starting XI. In fact, it had even gotten to the point that a loan move was beginning to feel like a possibility after the youngster expressed his desire to be a more active member in the senior team.

“In theory I didn’t plan to leave on loan in the winter window. I would like to have more minutes with the first team, but if I won’t get them, I will have to make a decision”

Riqui Puig on his future at Barcelona in November

Quique Setién, in his presentation as a Barça coach, claimed that he would be willing to hand out play time to youngsters periodically, but after finding himself in the piles of mess Valverde and the board had left behind, saving his job ultimately became his biggest objective, which subsequently meant chances for Puig were limited. In spite of producing a promising display against Granada while coming on from the bench, Riqui’s only major participation pre-lockdown came against Ibiza in the Copa del Rey.

While it was still too soon to be blaming Setién for not frequently featuring the likes of Riqui, Barcelona’s lack of energy and exuberance on the field was evident with ageing players like Arturo Vidal and Ivan Rakitić continuously starting games. Subpar displays against Real Sociedad and Real Madrid alluded to the fact that a player such as Riqui was in high demand for the blaugranas.

Nevertheless, with La Liga enforcing it’s new enervating schedule post lockdown, the bright La Masía student’s fate had been twisted in his favor. No longer did he have to watch his seniors start games from a distance, since his time to share the stage with his idols had finally arrived.

Despite not receiving an opportunity in the first game against Mallorca, Riqui was given 20 minutes against Leganés in the second match, where his immense potential was truly put to light. During certain parts of the game, Barcelona’s build ups severely lacked innovation and verticality as the azulgranas often became exceedingly static in the centre of the park. But with the introduction of Puig, Barcelona were far more effective moving forward. The Catalan boy instantly brought a surge of energy, which none of the excluding players displayed. 20 minutes is all it took for Riqui Puig to dominate Barça’s midfield and display his virtuosic abilities on the ball.

Then came Puig’s second stint as a substitute against Athletic Club de Bilbao, where he once again stole the show. Whilst it was Rakitić who gave Barcelona the long-awaited opener, Riqui’s arrival in the second half was equally worthy of praise. Barça were struck with dullness and characterless football, until Puig made his grand appearance. Illuminating the pitch with his brilliance on the ball, his exquisite touches, potent positioning and magnificent mentality, helped Barcelona wake up from it’s slumber in the second half.

In spite of earning a starting spot in the team, Riqui Puig was given no minutes in the Champions League | Photo by Manu Fernández / Pool via Getty Images

After those two highly influential displays, Riqui Puig started making a strong case for himself to start games, which Setién did well to recognise. He featured in the line-up against Celta de Vigo and Atlético de Madrid, in which he mesmerised the opposition, as per. The game against Atleti was a sight for a sore eyes and a relief for those who questioned his ability to counter a physically robust team.

The man-of-the-match exhibition he produced proved that he was as capable as any other veteran in the squad to be starting high-magnitude fixtures. Notwithstanding the fact that he had shown his insane potential on previous occasions as well, this was the game that truly elevated Puig’s status. Barça failed to grasp a convincing result, but for once, they had a positive to behold.

Opportunities after that surprisingly became slightly infrequent and his absence was felt massively in games where he wouldn’t start, which was especially seen against Espanyol. Even against Real Valladolid, the youngster was only played for the first 45 minutes. Logically, bringing him off immediately deteriorated the club’s performance. Still, at long last, Riqui participated for the full 90 minutes in the closing game of La Liga against Alavés, which was arguably his most promising and appealing display. He managed to bag himself 2 assists and 4 key passes, while even hitting the crossbar once. The youngster, simply put, ran the show in midfield.

With the La Liga season coming to an end, Riqui remained with the first team, preparing for the much awaited Champions League. He was even denied from going back to the B team in the hope that he would be an important asset in Europe. But to the surprise of many, Setién didn’t seem to trust him in both fixtures. His exclusion seemed to have a massive impact in midfield, where Barça fell prey to it’s own deficiency in creativity and energy.

What next for Riqui Puig?

After the recent rise to the first team, it’s probably a no brainer that the 21-year-old should be immediately promoted and handed the keys to Barcelona’s starting midfield. With the competition in the first team rising next season, Puig should still be a bench figure and rotated on a consistent basis.

A trait most current Barcelona midfielders lack is Riqui Puig’s unequalled desire and yearning to progress forward with the ball. Despite not being a recurrent member of Barcelona’s starting XI, La Masía’s pearl outshines all seniors in that facet of his gameplay, bringing an unflagging level of enthusiasm and vitality every time he steps foot on the field. Although he is yet to develop as a player, with abundant play time, faith, belief and reliance, he is destined to go a long way.