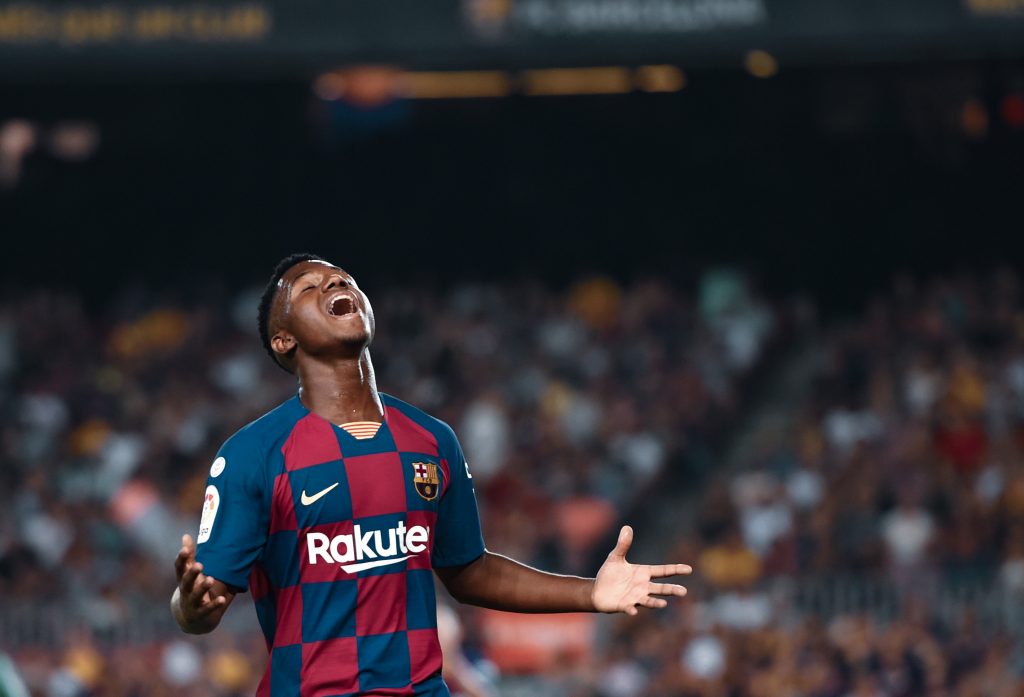 Ansu Fati has been one of the few bright spots at Barcelona this year, so let’s review the 19/20 season of the bright and sensationally surprising 17-year-old.

This is the third episode of a series in which we review the performances of the different Barça first team players, as well as discuss their futures for the next campaign. You can check the series here.

In a season full of disillusion, some shine brighter than others. Usually, when big clubs have dismal terms, they look back at their bright spots to build around them in the future. Barcelona have had their worst season in a long time, finishing trophyless and with the biggest embarrassment against Bayern Munich, but one player made everyone smile in the 2019/20.

Ansu Fati, the La Masía graduate, began the year as an emergency back-up, as Luis Suárez, Lionel Messi and Ousmane Dembélé were all down injured in the first couple of months. The winger did not wait to impress the unimpressionable Camp Nou crowd with goals and sparkles that will last a lifetime.

When he came on at Camp Nou against Real Betis about a year ago, coming directly from the Juvenil A –– U19 A –– without even having debuted with Barça B, many interrogations surrounded him. First, would Ansu be a sustainable starter for his boyhood club or just a player to paper over the cracks when the superstars came back? Well, given his superb season, for a teenager, it’s fair to admit that the former has been the case with Ansu. The youngster came, saw and conquered in the space of a year. Beginning as a rookie and ending the year as a good option off the bench if not a starter.

Ansu made everyone forget the permanently injured Ousmane Dembélé. The then-16-year-old was one of the two bright lights, later along with Riqui Puig, when the team looked dim and drained. His first real performance came at the Camp Nou, a few days after becoming the second youngest debutant in the club’s history at 16 years and 298 days against Betis, and after scoring his first goal in a disappointing 2–2 draw away at Osasuna’s El Sadar. Against Valencia on 14 September 2019, the newbies showed so much promise. Frenkie de Jong for Ansu, followed by Fati to De Jong. It was superb. The midfielder and the winger found each other like two mates who played football for the longest time. Ansu made culés dream, believe there was light after Leo’s passage at Barça.

At 17 years and 40 days of age, against Inter Ansu Fati became the youngest goalscorer ever in the Champions League | Photo by Isabella Bonotto / AFP via Getty Images

Theoretically, a 17-year-old should not be used as much as Ansu has been. It’s unusual to see such talent in such a raw player, especially as his ability was spread over more than 20 games, and he found his feet in every one of them. His performance of the year came in February. With Quique Setién not impressing the masses with Barça, and losing at Mestalla in the previous La Liga game, he had to win at home against another team from the Valencian region, Levante. Ansu Fati was up for the fight. Two goals assisted by Leo Messi in the space of a minute, it was pure magic from the two La Masía graduates. Ansu was exceptional that day, scoring a brace, and it summed up his season. Sparkles and potential in such a short period of time made every Barça fan dream again, and light up their eyes.

Culés were proud, cherishing Ansu Fati like their child. It was impressive, and Ansu kept impressive. Before his performance of the season, the Guinea-Bissau-born winger wrote his name in the history books of the Champions League, Europe’s premier competition. Against Inter Milan in a tight group stage game, Ansu was gifted five minutes to show his talents, and he owned the place. A lovely one-two with Luis Suárez and the winger placed his shots in Samir Handanovic’s net, and that trademark shot would stick with him for the whole season.

His placed shots are lethal, and hopefully, he will work on it to become even more lethal from them, but his impressive goal against Leganés in June was the top of the bunch. This dull game was made all so bright by Ansu Fati’s rocket that went through Iván Cuéllar’s net straight into history. A few weeks later, Ansu would complete the round against Villarreal, placing his shot again and showing who the great Ansu Fati is.

“[Ronald] Araújo, Riqui Puig and Ansu will have first team numbers next season.”

All in all, Ansu Fati was the story of the season and will become a first-team member next year. Already deemed untouchable by president Josep Maria Bartomeu, Ansu is set to become the next big thing in Barcelona, and he will carry the team to new levels. Cheers to that.

What’s next for Ansu Fati?

Next season will be Ansu’s chance to impress more. After a successful breakthrough year, the winger’s performance will be under scrutiny, and he will have to show as much promise as he has during the last few games.

“Above all a team needs a footballer with speed. Look at the amount of problems that Vinícius Jr caused Barcelona. Now, they don’t have one that comes deep and looks to touch the ball a lot. I saw Ansu Fati doing very well because of his speed, and they need a footballer like him because the rest play to receive the ball.”

Ronald Koeman before being appointed as Barça manager

With Ronald Koeman, a man who has shown and said multiple times that he plans on using the youth, Ansu has a real chance. Ansu will go right to the very top, perhaps reach Messi levels of legendary. La Masía is the gift that keeps on giving, and Ansu is just one of the presents around the Christmas table.