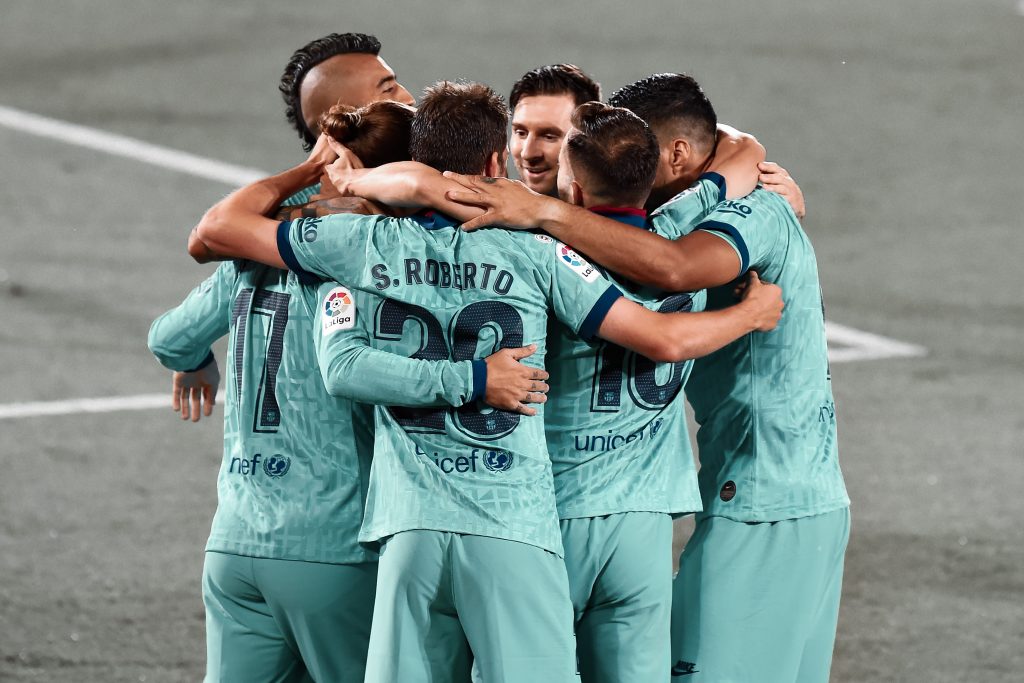 Despite how difficult winning La Liga is, Barça shone with their best performance under Quique Setién and one of the best of the season. An almost perfect match and one that thrilled all fans. These are five takeaways from the Villarreal 1–4 Barcelona.

After losing points against Celta de Vigo and Atlético de Madrid consecutively, Barcelona needed a victory. More than to obtain the three points to continue in the fight of a complicated league, Barça needed them to recover the confidence. An injection of motivation to remember who Barcelona is, what the players are capable of, and that, despite all the negatives inside the club, what happens on the pitch shouldn’t be one of them.

Quique Setién fielded an unusual line-up that raised many eyebrows for the players selected. However, the blaugranas surprised everyone by dominating against Villarreal with great football, verticality, fluidity and joy. It had been a long time since the culés‘ had last witnessed such a satisfying display of Barça’s best football.

Perhaps La Liga is close to unachievable, but it must be remembered that the season is not over yet and that there is a Champions League to play for in August. For now, the exhibition against Villarreal was synonymous with how the team should play game after game. These are five things that Barcelona learned from their 1–4 win over Villarreal on Sunday.

After nine games in La Liga without finding the net and a couple of poor performances, Antoine Griezmann finally smiled again as he scored a goal and was key in yesterday’s victory. Quique Setién chose to play the Frenchman alongside the two players with whom he did not seem to have a good understanding on the pitch: Lionel Messi and Luis Suárez. Nevertheless, the coach located Griezmann in the area that best exploited all his virtues, playing towards the centre and having the freedom to move and drive the ball from the final third through a great connection with Messi and Suárez themselves.

During the match, Antoine was extremely participative both in attack and defence. Without the ball, he was always well positioned, moving quickly and being free to receive a pass from a teammate. Then he quickly began to circulate and contribute with a great rhythm to the azulgranas‘ attack. When the team lost the ball, the Little Prince was placed in a deeper area, supporting the midfield in the counter-attacks of the locals and pressing hard to recover the ball as soon as possible.

The cherry on top of the cake was Griezmann‘s stunning goal. After several chances, Messi backheeled the ball to the 29-year-old in the 45th minute. The Frenchman had confidence in himself and sent a perfect chip from outside the box over Sergio Asenjo. Without a doubt, one of his best goals as a Barça player, and one of his best displays for the Catalans too. Furthermore, his movements leading up to the game opener were very fluid and were one of the reasons why Pau Torres scored an own goal too. Monsieur Griezmann is back.

In recent years, Sergi Roberto has had to operate at right-back, outside his natural midfield position. His versatility has helped him to be a profitable asset in such role. Notwithstanding, in the few games that the Spaniard had played back in midfield, he didn’t have the same impact. Yesterday, though, Quique Setién experimented with Roberto in left midfield, and he was not mistaken. A masterful match by Barcelona’s fourth captain.

“Tactically, it had been a while since I played there [midfield]. Sometimes I play central midfield but on the right, and today I was on the left side, where I am most comfortable. It’s where I played for Barça B”

Sergi was like a joker from a poker game. He did not have a primary function but was functional in all areas. He was nowhere, but, at the same time, he was everywhere. Without wingers, Jordi Alba and Nélson Semedo had to generate width for the Catalans, while Sergi Roberto often formed a back three with Clément Lenglet and Gerard Piqué to contain Paco Álcacer and Gerard Moreno in a successful way.

In attack, Roberto was ready to break lines and distribute with a privileged vision to witness the movements of his teammates and being the link of the different positions of the formation. Some time later, the Spaniard moved to right-back since Nélson Semedo had been replaced by Riqui Puig. He continued to perform at a good level. Mister versatility.

There have been very few clashes in which the attacking trio formed by Lionel Messi, Luis Suárez and Antoine Griezmann, also called the MSG, has performed successfully. Especially because of problems with chemistry, with Antoine not knowing which areas to occupy, the lack of width generated by the Frenchman in the left wing, and the poor organisation to counter-press. Nevertheless, at the Estadio de la Cerámica, Quique Setién seemed to have found the cure to such disease.

The coach made some adjustments in the formation. After several games with the usual 4–3–3, Quique chose a similar set-up to the latest game against Atlético de Madrid. The formation used against Villarreal was a 4–3–1–2, or a diamond-shaped 4–4–2. This scheme consisted of three interiors and an offensive midfielder, or mediapunta, in charge of distributing the ball and playmaking. In this case, Lionel Messi.

These tactics made Leo play in a zone where he feels comfortable, orchestrating the blaugranas‘ attacks. The Argentinian was positioned behind Suárez and Griezmann, both quite central. By contrast, in defence, the number 10 exchanged roles with Antoine as the Frenchman had greater defensive duties. Without a doubt, it was the first time that the MSG was so well connected, with a brilliant understanding and attitude. If these three attackers are to play together often, this system should be applied.

One of the aspects that has been harshly criticised towards Quique Setién at Barcelona has been his use of substitutions. Since the return of La Liga, there have been few games in which the coach has used the new five substitutions rule to his advantage. The changes made by Setién were either too late or not the ideal ones. Fortunately, Setién wisely used the five changes at the right time against the Yellow Submarine.

The first two changes were made in the 60th minute, as Riqui Puig and Iván Rakitić replaced Nélson Semedo and Luis Suárez. 12 minutes later, Ansu Fati was subbed in for Antoine Griezmann, and Martin Braithwaite for Sergio Busquets. Ansu himself scored the final goal of the match, in what was the 9,000th goal in the club’s history.

“We don’t like to be behind in the standings, but we will fight to turn the situation around, knowing how complicated it is”

At last, the coach gave Ronald Araújo a few minutes to rest Gerard Piqué. In total, three Barça B youngsters played and the coach gave some much-needed rest to key pieces such as Suárez, Busquets and Piqué. Now, fans hope to have such excellent work displayed with more consistency and, of course, to see B talents Monchu Rodríguez and Álex Collado getting some chances as well.

5. The full-backs do a master job

The only problem the 4–3–1–2 formation could have is that it usually is too narrow, except if the right players and approach are used. Without wingers to open up spaces, it is the full-backs who must provide the width and depth. Thus, against Villarreal they managed to make a great impact in the final third to find endless spaces in the Groguets‘ backline. All thanks to the superb display from Nélson Semedo and, mostly, Jordi Alba.

Still, the use of such system was adequate since, with Sergi Roberto in midfield, the Catalans were more secure in defence and the full-backs had much more freedom than on other occasions. In the same way, their explosiveness and end product was remarkable, participating in almost every single play. On the left wing, Alba was a dagger, recording the assist to Pau Torres’ own goal. In almost all positions, and from the first till the last minute, Barcelona delivered an exhibition at the Estadio de la Cerámica.