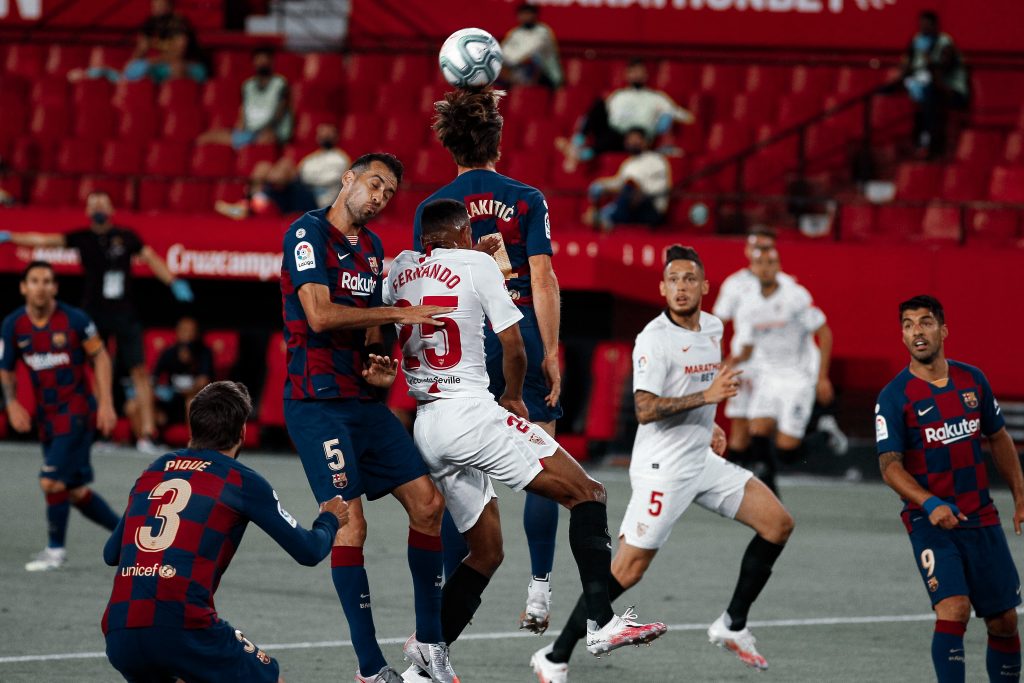 A game in which we saw a more serious Barça and witnessed a brilliant first half. However, the azulgranas could not maintain the level in the second 45 minutes and ended in a draw that may decide the league title. These are 5 takeaways from the Sevilla 0–0 Barcelona.

Following two adaptation matches after the long coronavirus break, Barcelona finally faced a big clash against the third-placed side in La Liga: Sevilla. Definitely a real challenge for the azulgranas, who had to get a mandatory victory to keep on top of La Liga. Barça made one of the best first halves of the season. Without Frenkie de Jong or Sergi Roberto, who were unable to travel to Ramón Sánchez Pizjuán due to injury, Setién’s team played a fluid, dynamic, aggressive and highly energetic game. Especially in the first 30 minutes.

Nevertheless, mismanagement by Quique Setién with the substitutions, and the inclusion of Éver Banega by Julen Lopetegui’s team, made Sevilla take more control over the match. In the end, Barcelona could secure nothing more than a goalless draw, putting the leadership of La Liga at risk. Here are five things we learned from the Sevilla 0–0 Barcelona.

1. A brilliant display from Barça in the first half

If there is something that the Catalans lacked in the previous two games, it was the intensity that could be seen by them in the first 30 minutes at the Ramón Sánchez Pizjuán. Vertical passes by the defence and high pressure from the midfielders, who always anticipated and allowed a fluid ball circulation based on dominating through possession. It had been a long time since the blaugranas had been so active on the field. A great collective display by all the players and, although the goal was missing, if they kept with this style of play Barcelona could easily have managed to open the scoring with the passing of the minutes.

Unfortunately, Barcelona could not get that goal and the level of intensity changed dramatically in the second 45 minutes. As a consequence, there were more and more complications to get the long-awaited goal. The good news is that we could see that Barça is capable of playing at this level of aggressiveness. The thing that is missing is to apply it always. If they could in those 30 minutes, why not always? With this sample of what the culés can do, at least it has been proven that they have the capacity to do it more often.

Iván Rakitić and Nelson Semedo are two players highly criticised by the media and fans, especially at the beginning of this season. However, since the arrival of Setién, both have been growing little by little. And now, with the return of La Liga, they have been playing at a level far above what they had previously shown. The match against Sevilla was not the exception.

Rakitić was very important both in defence and attack. He was everywhere, as if he was an all-terrain machine. When he had the ball, he was encouraged to contribute and be dynamic to create play and maintain possession. As soon as the team lost the ball, Iván was the first to go to press aggressively. Without the ball, Rakitić made good moves to get off his mark and receive the ball, opening spaces for other teammates too. There’s no doubt that we hadn’t seen anything like this from Croatian in a long time.

On the other hand, Nélson Semedo was energetic throughout the clash. With the absence of Sergi Roberto, the Portuguese had the opportunity to start and did it with a superb performance. Good positioning, a decent distance between the rivals, great footwork, powerful runs in the right wing and lots of explosiveness. It is crucial for the near future to see both Rakitić and Semedo demonstrating their talents. The more quality in this deep squad, the better, since there will be many rotations in the following meetings.

3. No impact in the final third

Barcelona played an almost perfect first half, and the second was not as bad as on other occasions. Still, there was one factor that remained constant throughout the match: the lack of impact in the final third. That last pass for glory. That ability to finish a play. The truth is that the blaugranas were vertical and had the intention of going forward, but that last spark was missing to find that hole and open the scoring. There was never a clear cut chance, despite the intention to achieve that long-awaited goal.

❛ We had more chances than they did, but we didn’t take them. They closed down well. We had plenty chances, but couldn’t score a goal ❜

Certainly, it is something that must worry us. Whereas previously Barça struggled to be harmonious but had enough efficiency in the opposing box, now it is quite the opposite. While previously there were difficulties in defence, lately there has been more solidity, but without goals in attack. Quique Setién’s team has to work hard on it. Perhaps the addition of Ansu Fati could have been helpful, or Luis Suárez could have been removed earlier, since the Uruguayan was completely static and was getting his first start in five months.

4. Wrong management in the substitutions by Quique Setién

After making rotations in the first two games in this return of football, Setién left much to be desired against Sevilla with the substitutions. When there is something you can use in your favour to be superior to the rival, you have to use it. By the 70th minute, Sevilla coach Julen Lopetegui had made four substitutions, to Quique’s only one. The rival manager incorporated fresh legs that did a lot of damage to the Catalans, such as Banega’s, who was the turning point for the blanquirrojos.

Meanwhile, the azulgranas continued with a team that urgently needed a change. To everyone’s surprise, in the second half Setién decided to leave the team without a front-three member and include a fourth midfielder by replacing Martin Braithwaite with Arthur Melo, deploying Arturo Vidal as a left winger in attack.

Moreover, the Barça boss seemed to do incongruous things. Like declaring in a press conference that he had planned with Luis Suárez to incorporate him little by little and that he had ruled out that the Uruguayan would play 90 minutes in a game. Against Sevilla, though, El Pistolero played the whole game when it was clear that he should have been substituted after half-time.

In total, Setién made only three changes, with one of them being in the 89th minute. Definitely, it was a disappointing management and, despite the fact that the team did not play so badly, it was reflected in the intensity. Similarly, Sevilla began to have more possession and Barça continued to have problems in finding a goal. Perhaps with a better approach in the substitutions, it could have been much better.

5. A tie that puts the title at risk

Barcelona’s biggest fear was the result of this match. Of course, nobody likes to lose or draw, but in this game a victory was vital. With this draw, though, the Catalans do not depend on themselves anymore to take the La Liga trophy. Because, with a victory from Real Madrid against Real Sociedad, Los Blancos would become the new leaders of the competition. Consequently, Barça would necessarily have to win all fixtures and also expect Zidane’s men to drop some points along the way. Something that clearly leaves Barcelona at a disadvantage.

❛ I’m not satisfied, but one point is still more than nothing. We knew that it was going to be almost impossible to win all our remaining games ❜

Being optimistic, Barcelona drew against the third-placed side in La Liga, in a very difficult stadium. In itself, this is not a bad result, but in the current context, it is an unfavourable outcome. Even so, there are eight encounters remaining, which are equivalent to 24 points. There are many clashes left. So this is not the end yet, even if it looks like it.

It is time to start seeing the remaining games in a different way and see that great things can still be achieved. If we witness more of what we saw in the first half in the rest of the league, surely nobody will be able to stop Barça, as long as there is an impact in the final third. There is still time. Let’s move on, and keep improving.