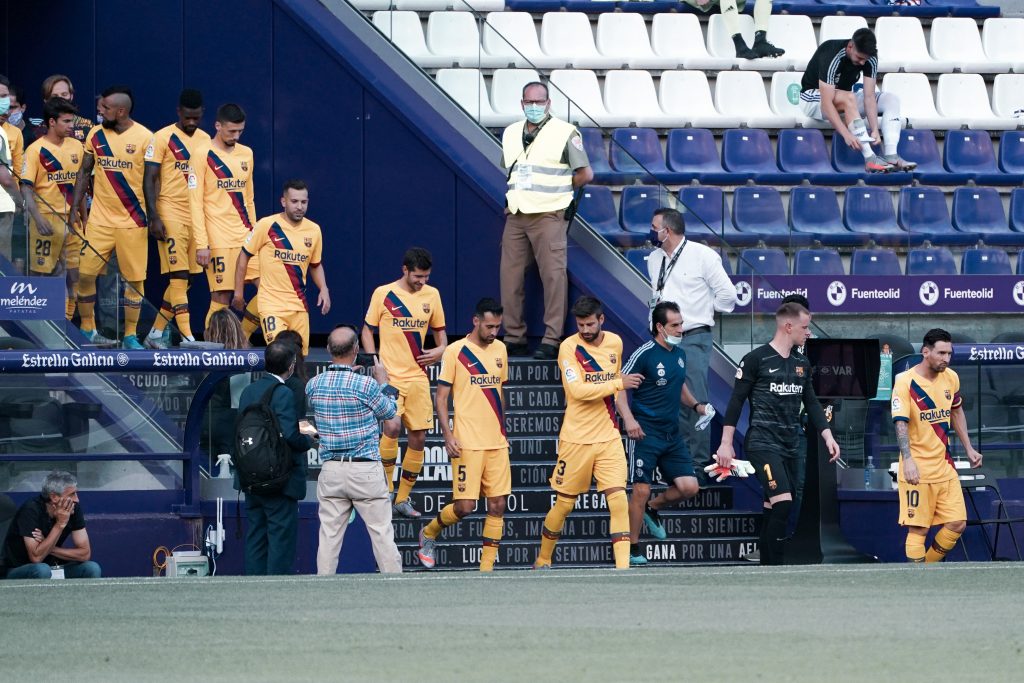 Despite an almost unachievable title, Barcelona continues to gain points waiting for Real Madrid to lose or draw. Against Real Valladolid, Barça had a great first half, but the second one was painful to watch. At least Quique Setién’s side got the three points. These are five takeaways from the Real Valladolid 0–1 Barcelona.

There are fewer games left for Real Madrid to be champions, but Barcelona cannot relax at any moment, as they must wait for their eternal rival to drop points. On Saturday against Real Valladolid, the blaugranas knew of the difficulties they would face against a very compact defensive team.

However, Quique Setién found a way to dominate the game with a 3–5–2 formation, although things were more complicated in the second half. Fortunately, a solitary goal by Arturo Vidal, as well as a good performance by the defence, gave Barça the three points. Still, there are many aspects that were not convincing. These are five things we learned from the Real Valladolid 0–1 Barcelona.

The level that Gerard Piqué is showing this season is undoubtedly wonderful. From being doubted at the beginning of the season to being a defensive leader capable of supporting his team in a large number of games without conceding a goal. There are also commendable performances by the other members of the defensive line, but Piqué’s are simply out of this world. Maturity, intelligence and motivation. Despite not being leading La Liga, he encourages the entire team to continue fighting. Against Valladolid, Gerard delivered an impeccable exhibition.

Despite having to deal with the likes of Sergi Guardiola and Enes Ünal, Gerard Piqué was extraordinary | Photo by Irina R. H / Zuma via Imago

At the José Zorilla stadium, Piqué was a master of positioning, taking the ball from the back, and a defensive monster. Just take a look at his stats: 11 clearances, two interceptions, two tackles, four aerial duels won, 87 completed passes with an almost perfect 97% effectiveness, and only three possessions lost. Gerard is more than a defender.

In the game, his defensive solidity could be greatly appreciated, but at the same time his good anticipation and concentration in both phases stood out through the 90 minutes. The number 3 has been and will continue to be extremely important for Barcelona since the return of La Liga, even though he is playing with too much fatigue. If he can stay this way, but with more rest, in the Champions League Barça will be blessed to have a superb weapon to stop the world’s best attacks.

2. From dominating to being dominated

Barcelona’s difficulties in killing the games have been dramatic throughout the season. Perhaps Quique Setién has improved many aspects in a tactical level for Barça, but the ability to maintain the result through possession and by searching for more goals has disappeared. Against Valladolid, though, Setién had to face one of the teams that usually sit deep and compact, but this time without wingers since Ansu Fati had been sent off against Espanyol.

Fortunately, the coach knew how to adapt and find a scheme that would allow the team to find the spaces. The formation used was a 3–5–2, a system he implemented in his arrival at Catalonia, but which he abandoned after a series of bad results. However, in matchday 36, this structure returned and was a great success. Sergi Roberto, who had a brilliant display, was in charge of forming a back three alongside Clément Lenglet and Gerard Piqué. Meanwhile, Jordi Alba and Nélson Semedo were on both wings, with Riqui Puig, Sergio Busquets and Arturo Vidal as midfielders to collaborate with Antoine Griezmann and Lionel Messi in attack.

“We were expecting Valladolid to play with five defenders, and we did the same thing to narrow them down”

This formation generated much danger on both sides, especially on the right one, where Semedo did a great job. Despite having several goalscoring chances, the azulgranas only managed to score once through Vidal in the 15th minute. But, even so, the visitors were exhibiting a good football and ended the first half with good sensations.

The problems started in the second half, when Setién replaced Riqui Puig in the 57th minute to introduce Iván Rakitić and transform the scheme to a 4–3–1–2. Later he returned to the 3–5–2 after making the rare substitution of Junior Firpo for Sergio Busquets.

“When you are tired, you lose the ball a lot”

With the passing of minutes, Barça lost control with a team without creativity, much slower and more conservative. As a consequence, the locals began intimidating the visitors’ goal. If it were not for Marc-Andre ter Stegen and the impeccable defence, Valladolid would have certainly got on the scoresheet.

3. Riqui Puig is the energy the team needs

In the blink of an eye Riqui Puig could be seen going from one area of the field to another. If the team’s movement shifted from concentrating on the right flank to the left, Puig immediately moved to the adequate side in a matter of seconds. Furthermore, on the ball he always tried to drive it or pass it vertically.

All fans have realised what Riqui is capable of: generating energy for the rest of the team. Unfortunately, this rhythm that the 20-year-old offered disappeared when he was subbed out in the 57th minute. From that moment, the level of the Catalans was in decline. At least, Puig shone once again and, without a doubt, Setién will need him to increase the chances of progressing in the Champions League.

4. Nélson Semedo did great in a new role

Nélson Semedo had a brilliant match in a new role, playing as a winger or wing-back. Semedo has not changed, but the structure and way of supporting him has. On the right side, accompanied by Sergi Roberto, Vidal and Messi, Semedo could receive the ball with more space because there was support behind. This interesting role brought the best out of the Portuguese in the offensive side.

This attacking structure permitted Semedo’s free forward runs, as he generated multiple goalscoring opportunities such as a cross to Antoine Griezmann or a shot that fell into the hands of Jordi Masip. With a team that often has limited options in different positions, having a player available to play in various roles is valuable. This 3–5–2 was perfect for Nélson, although in a 4–3–3 he could have almost the same impact if he was well supported rather than alone.

Probably the only positive in Lionel Messi’s match against Valladolid was his assist to Arturo Vidal in the opener. Leo did not have a bad game, but he performed below his extraordinarily high standards. He looked extremely tired and ineffective. However, Leo managed to tie Xavi Hernández‘s record of 20 assists in a single season in La Liga. This is what someone like Lionel does: he is not in his best goalscoring streak, but he takes advantage of it to improve his assisting numbers.

“Yes, Messi should rest, but we didn’t have enough of a lead in the game. If the lead was bigger, Messi would have taken some rest”

With this assist, Messi will have two more games to overcome his former teammate and to match or exceed Thomas Müller’s record of 21 assists in one campaign in Europe. In addition, he became the first player since Thierry Henry in 2003 to join the 20 / 20 club. This means to score a minimum of 20 goals and distribute at least 20 assists in a league course. The years go by, but Leo continues to leave his mark on history.