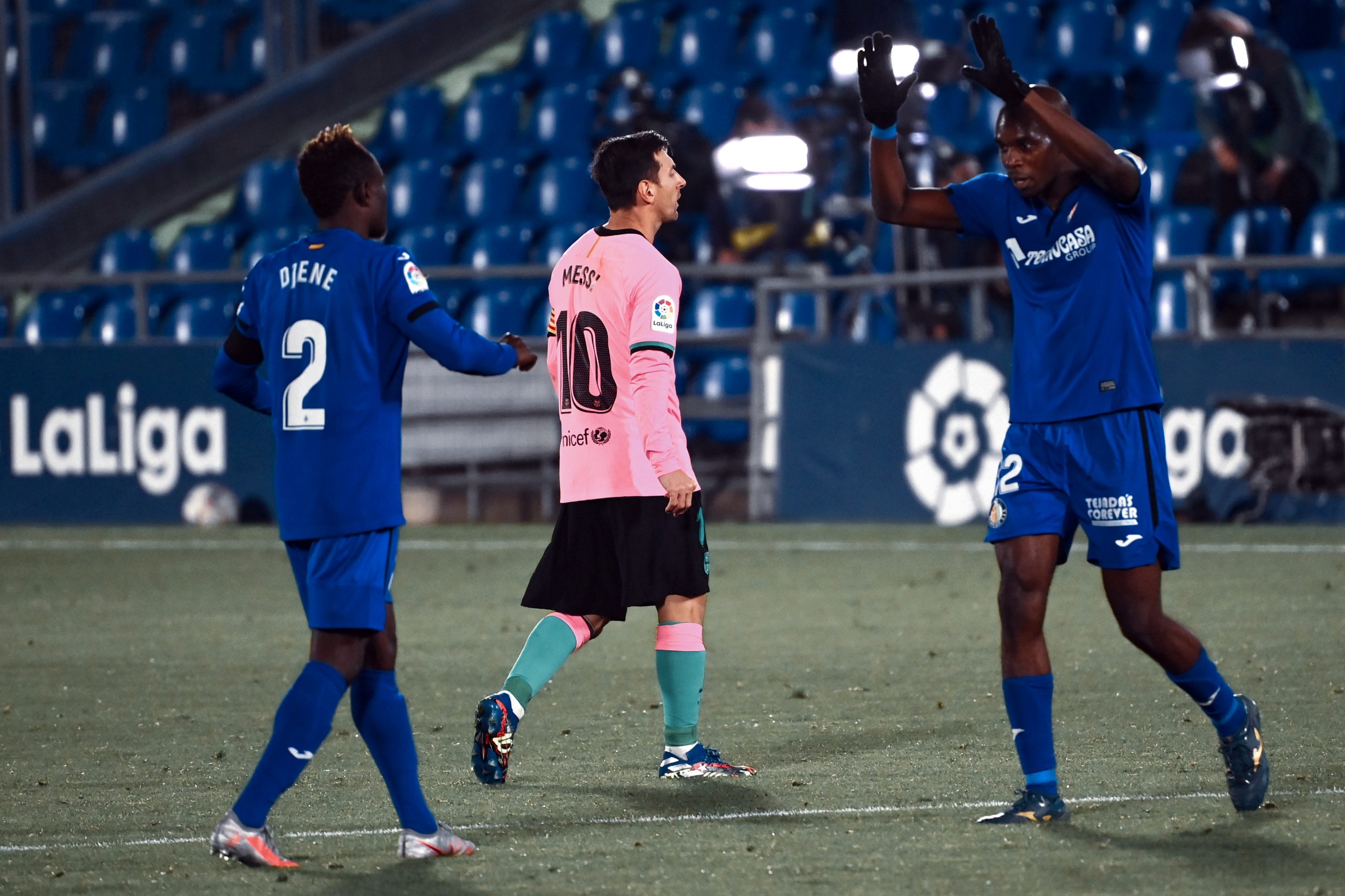 After several weeks of good results, Ronald Koeman faced his first loss as Barcelona coach. Getafe won by the minimum at home to a Barça that was getting worse as the minutes passed during the game. These are the 5 takeaways from the loss in Madrid.

Barcelona faced their first defeat in the Ronald Koeman era against Getafe on Saturday night. It was not an easy game, since the style of play of the rivals and the fact that the Catalans played as visitors affected the development of the game.

However, Barcelona looked solid for the most part, and a penalty from the locals was the start of a meltdown from the Garnet and the Blue. While Getafe took advantage of their physical and defensive capacity to maintain the result, Barça looked out of ideas. The refereeing, too, was a bit suspect, to say the least, and it only added to the visitor’s troubles. The only silver lining was Real Madrid, who also lost points on the day and Barça could top them in the El Clásico next week with a game in hand. These are the five takeaways from Barcelona vs Getafe.

1. Antoine Griezmann is going from bad to worse

Antoine Griezmann has started every single game this season under Ronald Koeman, and each performance is worse than the previous one. Even though Griezmann shone with the French National Team, he was one of the players with the fewest participations in the game Getafe. He was not able to connect with his teammates well enough and missed the easiest chance of the game the one time he did.

As long as Griezmann is a Barcelona’s player, we as fans have to support him so that he can resurge into his best form. That said, he has already received had four chances as a starter and has displayed very little to cement his place, especially when there are players like Pedri, Fransisco Trincāo, Ousmane Dembele, and Konrad de la Fuente waiting for opportunities every game.

One positive thing that Ronald Koeman implemented in his system is constant rotations during games. In all clashes, the Dutch coach has made use of almost all the allowed changes to get players off the bench. Yesterday, too, the Dutchman tried to make the most of his bench, but the decisions taken were not the most optimal.

Koeman started by introducing Ansu Fati and Philippe Coutinho for Ousmane Dembélé and Pedri. In theory, it was a move that made sense since the subs were like-for-like. However, removing the 17-year-old and leaving Griezmann on was questionable, to say the least.

Ronald Koeman did not utilise his bench to its maximum potential. (Photo by GABRIEL BOUYS/AFP via Getty Images)

Sometime later, with 10 minutes remaining in the match, Francisco Trincão and Martin Braithwaite entered for Frenkie de Jong and Griezmann. Removing de Jong was not the correct call, in both fore and hindsight. More than that, however, Koeman should have brought on a striker earlier than the 80th minute. Finally, Riqui Puig debuted this season but entering at the 87th minute for Sergi Roberto, he did not have enough time to change to course of the game.

In the absence of a goal and with a few minutes to achieve it, Barcelona opted to structure themselves into a 3-2-5, and the lack of midfielders in the centre of the park slowed down transition into the attack, therefore giving Barça no opportunities to create.

3. A case of a horrible refereeing

Usually, bringing up poor refereeing during a game means bad officitating for both teams, which concludes in nothing. When Barcelona plays poorly while there being dubious plays on the subject of referees, it is not the main reason for the team’s failure. Yesterday, however, we witnessed something different. There were countless plays in which the decision from the referees cost Barcelona the game.

Gerard Piqué was on the receiving end of a yellow card in the first half for winning a header, which became worse when Allan Nyom was not booked for elbowing Messi in the face a few minutes later. Cesar Soto Grado also missed the penalty when Nyom fouled on Ansu Fati inside the box. Not to mention, the Cameroonian was still on the pitch despite clocking in eight fouls in the game. Barça could have done better, sure, but there were multiple shady decisions that, when given the way in favour of Barcelona, could have helped gain the three points.

4. Sergiño Dest was productive from the left flank

With Jordi Alba injured and Junior Firpo recovering from injury, Koeman was facing crossroads picking his team for the game. In the end, Sergiño Dest was given the responsibility of defending the left flank and supporting the team in offensive tasks with his runs. Although not his natural position, the American displayed brilliance both defensively and offensively.

Dest seemed to connect well with his teammates already, covering the wide areas well, and won important duels in rivals’ half. He also gave several key passes and was able to maintain a high-intensity throughout the game. The 19-year-old showed signs of better things to come, and him in his natural position will truly be sensational to watch.

5. Pedri’s brilliant performance in the no. 10 role

Pedri had his first starter game for Barcelona, and he did not disappoint. Playing in Philippe Coutinho’s position, Pedri stepped up and played brilliantly throughout the first half displaying unrivalled speed, creativity, and intensity in the attack. In addition, he generated multiple chances and was always looking to participate in the offence. Pedri was substituted in the 62nd minute by Coutinho, but his performance was excellent, as he capped off the game as possibly the best player on the pitch yesterday.

At just 17 years old, Pedri is turning out to be one of Koeman’s favourites. The Spaniard has had minutes in every La Liga game and has not put a foot wrong yet. It will be important to continue giving a talent like his minutes so that he can develop into a special footballer. Time will dictate the program of this jewel.