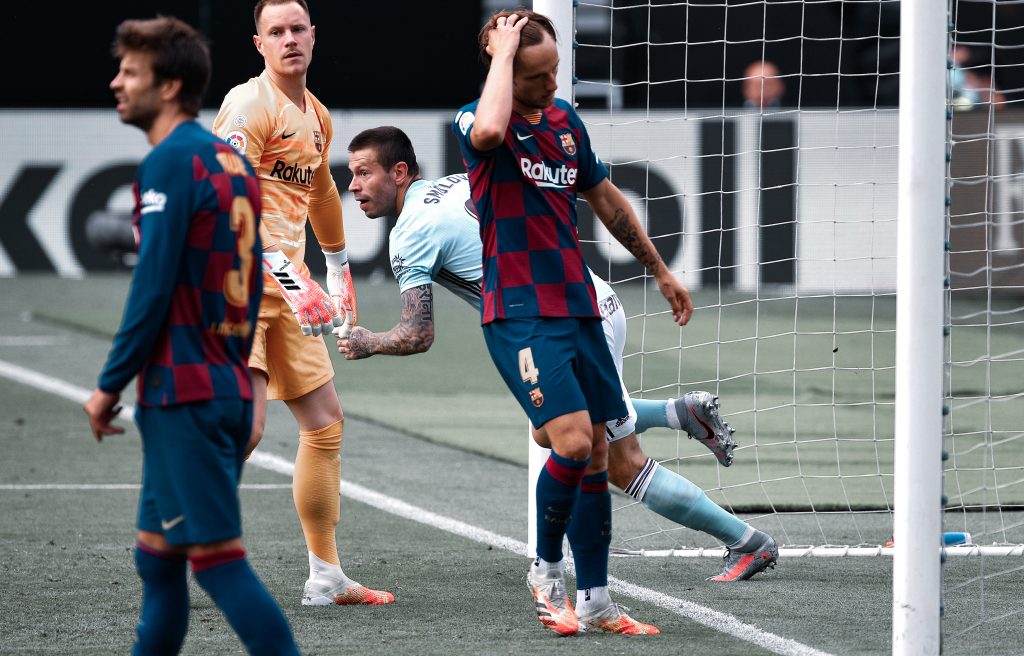 Without a doubt, Barça’s best first half since La Liga’s return to action. Unfortunately, Setién’s men lowered a bit their rhythm in the second period against a fantastic Celta de Vigo, who tied the clash. This could be the end for the culés, but there is no time for wailing. 5 takeaways from the Celta de Vigo 2–2 Barcelona.

Five years without winning at Celta de Vigo’s Balaídos and the unfavourable streak continues. Notwithstanding, on Saturday Barcelona started the duel with a level that had not been seen since La Liga’s return. Intensity, width and creativity. Barcelona was dominating a fabulous Celta side. With a goal in their favour, the Catalans ended the first half with the minimum advantage.

But, unfortunately, a couple of mistakes blessed the locals to score their first goal. And, although Barça recovered the lead, a late and stunning goal from Iago Aspas tied the clash to have his team further away from the relegation zone. A superb result for the celestes, but an awful one for the Catalans.

As a consequence, Barcelona could say goodbye to La Liga’s trophy after this tie. Still, there were multiple positives about the game. Like Iván Rakitić’s display in a deeper role; Riqui Puig and Ansu Fati‘s impact, and Ter Stegen’s saves. But there were mistakes that are unforgivable in this stage of the season too. Let’s analyse what there’s to take from the Barcelona versus Celta de Vigo duel.

Fans wanted this and they didn’t disappoint. Riqui Puig and Ansu Fati played for the first time as starters together. After some remarkable displays against Leganés and Athletic Club, Quique Setién trusted both youngsters to play such a decisive game. Despite their age, both prospects shone and elevated the team’s level with their presence.

While Riqui Puig was everywhere, doing combinations and fighting in every single play, Ansu was adding plenty of width for the team. Two key factors that opened up good spaces for their teammates, who had multiple chances of finding better gaps. Something that the blaugranas were missing in the previous games, despite Celta’s defensive line was made up of five men.

“We lacked the ability to convert our control of the game into goals. We could’ve put the game to bed in the first half”

Undoubtedly, Puig and Fati had a superb performance, generating width and solving many of the problems to have a greater impact in the final third. The entire team was favoured by this, especially the full-backs, who could break Óscar García’s defensive line. Moreover, the intensity that both players injected into the side must be highlighted. They were energetic every minute, spreading this to their partners.

Even so, it must be noted that Riqui and Ansu lowered a little bit their impact from the first half to the second. Not bad, but not brilliant. The man worry is if Barça’s technical staff could use this tie as an excuse to bench the young boys in the next fixture, which would certainly be a huge mistake.

2. Iván Rakitić’s brilliance as a pivot

Iván Rakitić’s great display isn’t a surprise for those who have watched Barcelona since the return of La Liga. Before the break, the Croatian was close to useless, but now he has found, again, his football. With Sergio Busquets‘ absence due to suspension, Iván was the chosen one to fulfil the difficult task of being a pivot at Barça. Despite his mistake in Celta’s first goal, Raki did a brilliant job in playing more deeper than he usually does, so we can’t ignore his brilliant exhibition because of one mistake.

The number 4 started the match being part of a midfield trio formed by Arturo Vidal, Riqui Puig and him. It was the Croatian who started the plays from deep, and allowed an incredible circulation of the ball, being well partnered by Riqui, since both were vital in the build-up. Furthermore, Iván completed 78 passes with a high success percentage of 90%, being extremely solid in defence and great in the attack. He was everywhere, pressing with intensity and moving the ball all around. Some vibes of 2014/15 Rakitić.

3. Samuel Umtiti is done at Barcelona

Probably one of the main takeaways from the Barcelona vs Celta de Vigo duel. Samuel Umtiti made his first start after the break and, without mincing words, had an awful performance. Being out of position in the majority of Celta’s attacks, running upfield when he shouldn’t, being out of shape, passing to the wrong teammate, pressing up when he shouldn’t, and lacking concentration. The Frenchman was totally off yesterday.

Moreover, Samuel made a huge costly mistake. He wanted to anticipate when he left Okay Yokuşlu run in behind him, leaving Gerard Piqué alone in defence against two attackers. As a consequence, Fiódor Smólov opened the scoring for the celestes.

After the injury that Umtiti suffered a couple of years ago, he has not been the same. Of course, he has been useful in some games, but we are, unfortunately, familiarised with the Samuel of poor performances. With Jean-Clair Todibo, Ronald Araújo, Gerard Piqué and Clément Lenglet at Barcelona, Umtiti is the first candidate to leave the club.

Big Sam has had a lot of positives and magic moments at the club, especially in his first two seasons, but it feels that he has nothing more to offer in this team. It really hurts, but it’s time to be realistic. This match was one of those errors that cannot be accepted, and Umtiti probably signed his departure out of the Catalans after this match.

4. Options in midfield were missing

No Frenkie de Jong. No Busquets. Two essential players in the core of the midfield were not available for this game. In addition, Arthur Melo‘s rumour linking him with Juventus put the player’s mentality out of what really matters right now. So Quique Setién could just count on these reliable options: Riqui Puig, Arturo Vidal, Iván Rakitić, and even Barça B youngster Monchu, who has not debuted yet with the first team.

This forced the coach to have an approach adapted to the situation. At the same time, it was also complicated for Quique to make substitutions with the interiors since there were no options on the bench. Still, he made a late change to give Arthur some minutes and rest Puig. But, as expected, the Brazilian was invisible with his football, but with a silence louder than the sound for all the drama.

In the second half, the Catalans greatly missed Busquets, who would have helped regain control of the game. Likewise, the possible sale of Arthur to Juventus in the coming days will open a gap in the team. This sale will cause discomfort in Barça’s midfield even if Melo will continue with Barcelona until the end of the season. His destiny must be had in mind, but also the fact that the race for La Liga and later the Champions League is on.

5. Marc-André ter Stegen: Secure between the post but nervous with his feet

How many times have we appreciated Marc-André ter Stegen for saving Barcelona’s day. The wall of the Catalans. The king under the sticks. The hero without a cape. Yesterday was no exception. Yes, Barcelona dominated Celta for most of the match with a solid defence. But it is also true that the locals played an excellent match and, when he was tested, Ter Stegen was there to make surreal saves. Always well positioned, with fast and effective reflexes, and preventing the rivals from scoring a goal after making saves on dangerous plays. Without him, the opponents could have scored two or three more goals.

Even so, surprisingly, the German goalkeeper was seen with difficulties in terms of passing the ball. Something impressive and difficult to believe, since it is an aspect in which he never fails. Atypically, against Celta, Marc-André was nervous more than once under pressure, not knowing where to direct the pass and many times having to send an early clearance. Something that fortunately did not affect Barça since Celta did not score a goal from any mistake by Ter Stegen, but it could have been dangerous.