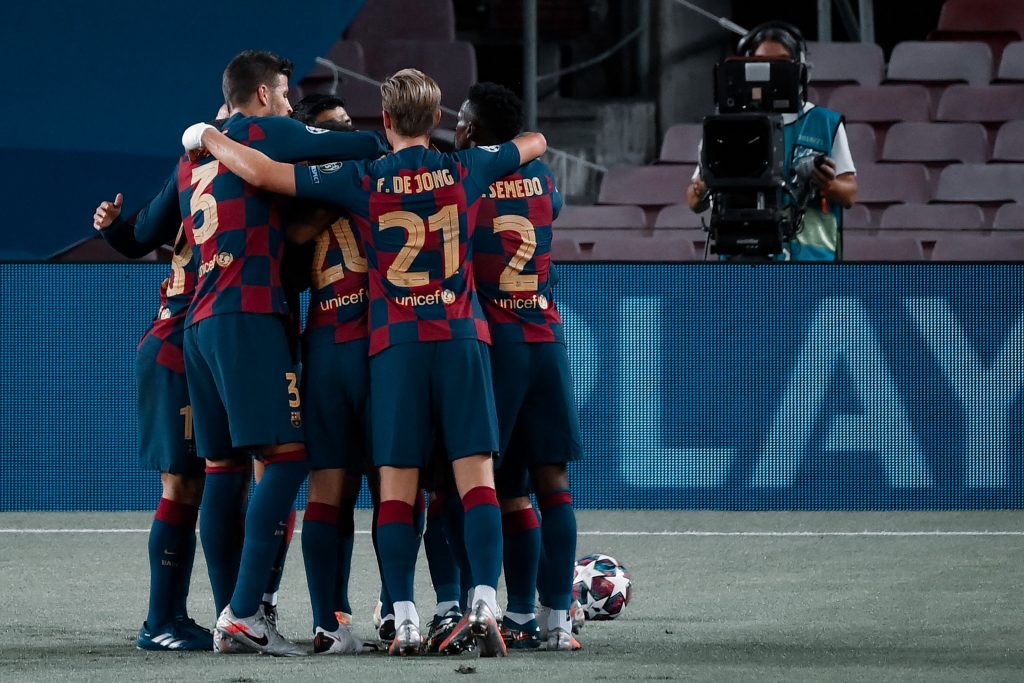 Barça’s future in the Champions League was at stake and they were under pressure to fail once again. However, the Catalans dominated the first half and, despite not having a similar second period, they knew how to keep the result to advance to the quarter-finals. Great result, doubtful management. These are five takeaways from the Barcelona 3–1 Napoli.

We all missed the most exciting, challenging and important tournament in all of Europe and it was finally back for Barça. After the first leg of the Champions League last 16 had finished 1–1 in Naples, Barcelona were forced to avoid the failure that their fans were used to seeing year after year. There was a lot of pressure before the game but, at the same time, a lot of faith turned into a great first half for Quique Setién’s team, who scored three goals, or four wasn’t one from Lionel Messi disallowed.

However, in the second half, Napoli began to have more of the ball and Setién made the substitutions too late, not to mention that Riqui Puig and Ansu Fati did not play a single minute. Even so, Barcelona got the ticket to Lisbon to play the quarter-finals against Bayern Munich. After Saturday’s victory, let’s review the five takeaways from the Barcelona 3–1 Napoli.

1. A rested Lionel Messi is on another level

It was painful seeing Lionel Messi underperforming because of fatigue in the final La Liga games. Notwithstanding, when the Argentinian is healthy, there are no words to describe his talent. Several weeks after the end of the Spanish league, La Pulga returned to action for the Champions League against Napoli with a majestic first half.

? — Lionel Messi has now scored against 35 different teams in the Champions League. pic.twitter.com/8kD4zx6GeQ

In the 23rd minute, Leo was in possession of the ball and took on many opposition defenders, making them look like toys and then somehow transforming a shot from an uncomfortable angle into a great goal. Minutes later, Messi received a brilliant pass from Frenkie de Jong which the No 10 received with his chest, brought down and cannoned into the back of the net. Unfortunately and controversially, it was disallowed by VAR for a handball.

Yet instances before the end of the first half, Messi was chasing his prey again, pressing near the opposing area. When he tried to recover the ball, Kalidou Koulibaly accidentally kicked on his foot, leading to a penalty that Luis Suárez converted due to the pain from Messi. From that moment, the little genius was more reserved in his plays, but the magic persisted through all 90 minutes.

2. No Ansu Fati, no Riqui Puig

Without Sergio Busquets, Arturo Vidal and Arthur Melo in midfield, and Martin Braithwaite and Ousmane Dembélé in attack, not even Ansu Fati and Riqui Puig were given the chance to play against Napoli. It is one thing to not introduce them when the team is already dominating, but the reality is that they were very needed in the second half. Ansu Fati would have been ideal to create and find more spaces, and Puig would have been very useful to provide some much-needed creativity.

“It was important to make this first step. We must take the rest of the games with this same hope. The team played well and deserved the win. We are not good enough to control the entirety of the game. We would like to, but that’s impossible”

Quique Setién only used two substitutions and both came after the 80th minute. If Barcelona want to win this Champions League, the coach will need to trust both youngsters. This does not mean that they should play every minute in every game, but they deserve to be trusted as they will always be ready to do what they do best: cause our jaws to drop. After not having taken part in Barça B’s play-offs for promotion to Segunda, nor having got any minutes last night, will they be used against Bayern Munich?

Being honest, no one could have expected Monchu Rodríguez to make his debut against Napoli after not having played a single minute in the final La Liga matches. But after being included in the squad list with other names of the youth teams such as Jandro Orellana and Konrad de la Fuente, the young 20-year-old midfielder Monchu had the hope of finally making his debut.

Above Riqui Puig, the number 42 entered the field in the minute 84 to replace Antoine Griezmann. He played for about ten minutes and it was enough to exhibit his maturity and courage playing against one of the best teams in Italy. He did not have time to have a great involvement, but exhibited confidence and security in the few balls he touched.

A truly deserved debut for Barça B’s captain and top goalscorer despite operating in midfield, and a talent that certainly deserves to be trusted more. Ansu Fati and Riqui Puig started getting few minutes in their opening performances, and now they are players with many more opportunities. This is the first step for Monchu, who debuted in the best possible tournament and waits for many more chances to come.

Frenkie de Jong played one of his best games as an azulgrana. Without Busquets, it was Iván Rakitić who acted as the pivot or holding midfielder, leaving Frenkie on the left side of the midfield. The Dutchman initiated many plays, moved freely, pushed hard and was always very well positioned. De Jong led the midfield and drove the ball with great confidence and personality. Nobody took the ball away from number 21.

Furthermore, he generate a couple of dangerous chances, and whenever he had the ball the rivals suffered too much to get a touch on it. The 23-year-old knew of the importance of a competition that led to him and his former Ajax being recognised worldwide last season. Young, but mature. New, but experienced. Culés will be longing to see his skills displayed against the best European teams again.

The first half was more than good enough in spite of the squad limitations and absences, presenting a great improvement in comparison to the final games of La Liga. While the second period was not inspiring at all, Barça have already started preparations for the battle that will take place in Lisbon. Despite not being the main favourites, the Catalans want their sixth UEFA Champions League title. The road will not be easy, but only three games are needed to lift the trophy.

“We are three games away from becoming Champions League winners”

Bayern Munich will be Barcelona’s first rivals in Portugal and, without a doubt, they are one of the strongest candidates to win the European contest. However, anything can happen on the road to glory, and Quique Setién’s men will look to replicate their best minutes against Napoli, and improve the most discouraging ones. Barça need three wins to avoid the season from ending trophyless, and now it is the time to trust them.