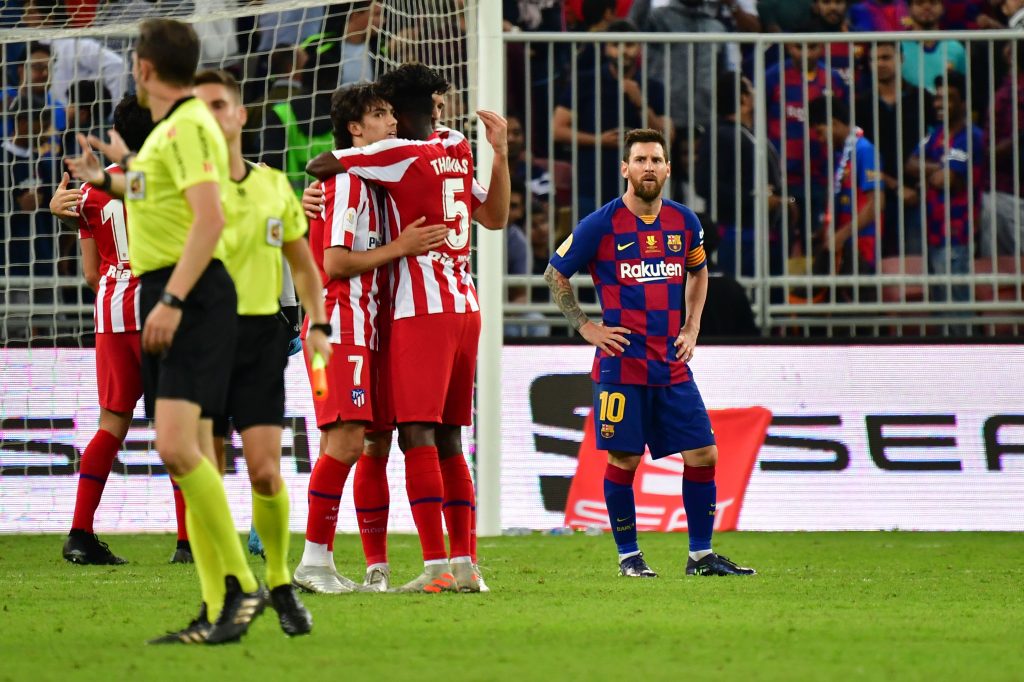 The Spanish Super Cup is the least important of all competitions, but losing always hurts. On Thursday, Barça were the better side, but not the winning team. 7 takeaways from the 2–3 loss from Barcelona against Atlético de Madrid.

Everyone can have a bad day, and everyone can make mistakes. Barcelona did have a good day on Thursday in Saudi Arabia, but errors in the crucial moments, as has been happening in the past seasons, knocked the Catalans out of another tournament. Judging by the competition and the collective performance, there’s no need for drama. The negatives tend to be even more highlighted in defeat, but Valverde’s men must look to repeat many of the positives from last night’s clash in the upcoming fixtures. While the wrongdoings should not be amplified, here are 5 takeaways from the Barcelona 2–3 Atlético de Madrid.

1. Barça can never have a flawless match

For three quarters of the game, the Blaugranas were the better team, dominating possession, being aggressive and having mobility in the final third. Had it not been for the disallowed goals from VAR, Barcelona could have deservedly been leading by 4–1. Nonetheless, after Piqué got his goal chalked off, the entire group had a mental disconnection and its defects were uncovered. From minutes 0 to 68, the real Barça was seen. With a 74.5% of possession and 91% passing accuracy, the La Liga champions were the masters of the encounter, even if Koke had given Atleti the lead only 18 seconds after coming in. From the 68th to the 90th minute, though, possession dropped to 65% and the passing reliability to 79%. In this period, Atlético made 3 shots, all of them being dangerous and on target. Two ended in the back of the net.

“It’s a shame. We played a great game. After a long time, we had the sensation of dominating the game again, but in the last 10 minutes we let the game escape”

Normally Barcelona needs to do much fewer to win a game, but yesterday they took their own medicine as the Rojiblancos were more efficient and won the battle inside the areas. It is sad that, in one of the best displays this term, Barça ended up losing and getting eliminated by an unconvincing opponent. Effectiveness decided the match, and Ernesto’s side, as against Espanyol, managed poorly the final minutes and the favourable result.

The cause of not completing a perfect exhibition was the undeniable vulnerability at the back. As Barcelona took a step back in the final minutes, they opened the door for Atleti’s comeback. Atlético believed in their possibilities, detected the risks taken by the opposing defence and killed the Azulgranas with their transitions. Barça’s centre-backs were exposed and disorganised and, after ball losses and positional mistakes, they opened up passing lanes for the Colchoneros‘ counterattacks. All actions went very fast, but individual errors facilitated the late goals from Morata and Correa.

Barcelona failed to control the intermediate zones between midfield and the backline, and there were excessive gaps left in defence due to a miscalculation and lack of coordination in the distances kept. Barça has only kept 2 clean sheets in the past 11 games, and has conceded 5 goals in the past 2 matches. The Blaugranas need to solve their defensive issues or they could otherwise suffer greater disappointments against even more lethal attacks.

For 70 minutes, an ambitious Barcelona was led by an even hungrier Messi. He was eager to have a Clásico in the Super Cup final. Continuously cheered by a crowd in Saudi Arabia that bowed at his feet, the Argentinian was highly motivated and showed it on the pitch. An accurate right-footed strike in the 51st minute drew Barcelona level and added a record-breaking 14th goal in the Super Cup to his tally – that’s twice as many goals as Raúl (7), who is the second top goalscorer in the competition’s history. The number 10 celebrated the equaliser effusively, and he would have completed a brace had it not been for VAR’s intervention.

Barça, though, could not take advantage of a brutal exhibition from the little genius, just like in last year’s Champions League tie against Liverpool following a masterclass from Messi in the first leg. Football doesn’t care at all about who deserves to win and who doesn’t. This sport can be cruel, and Leo did not get the reward he had truly earned.

4. There is only one Ter Stegen

In the last seasons a great number of victories have been obtained thanks to Marc-André Ter Stegen. With his recent injury, he couldn’t play against Espanyol nor in the semi-final against Atlético de Madrid. Neto replaced the German keeper in these matches. He disappointed. In preseason, Neto’s performances were magnificent. Surprisingly, Barcelona had hired a goalkeeper of higher quality than Cillessen. No lie. His great experience at Juventus and Valencia were a proof of this. But Neto failed last night. He can’t really be blamed with such a passive defence in front of him, but the Brazilian goalkeeper could have done better.

Neto made his official debut against Inter Milan, in the last fixture of the Champions League group stage. The Italian team needed a win. Despite multiple rotations in the XI, Barça secured the 1–2 victory with terrific efforts from Barcelona’s number 13, who made 7 saves in total. After an outstanding display, though, it was expected that, with the recent injury from Ter Stegen, the goalkeeping position would be in safe hands. Unfortunately, Neto didn’t have his best day. In his debut in La Liga against Espanyol, he conceded 2 goals. Wu Lei’s winner could have been avoided, but Neto made a positioning error.

In this semi-final against Atlético, he had two mistakes that were key in the defeat. In the penalty awarded to the Simeone team, Neto was the author of the foul on Vitolo. An unnecessary foul in such a tense moment of the game. He should have gone for the ball and not for the opponent’s foot, though it went all too fast. In Correa’s winner in the 86th minute, the 30-year-old did well to press the forward, but made a terrible save by making the ball go straight to goal. All of this in a matter of 5 minutes. Again, he can’t be blamed exclusively given such a vulnerable defence. But, in these last two games, Neto has lacked concentration and could have done much more. While Ter Stegen would saved the impossible, the former Valencia man left much to be desired in the Super Cup.

5. Busquets, the king of playing in the opposing half

It is nothing new that Sergio Busquets performs far better when he has to guide his colleagues in the rivals’ half than when he has to run backwards and go adrift in his own half. Barça’s strengths always get enhanced when the plan focuses around the ball circulation and pressing, and Sergio is the master of these arts. The timing in his recoveries, the positioning and reading of the game to anticipate the enemies’ movements, the body feints to trick the defenders, and the countless incisive passes between the lines show that he’s still irreplaceable.

Valverde did try to replace him, though, as he subbed him out in the 86th minute for Rakitić, when the game was tied at two. It is true that Busquets was dispossessed before the second conceded goals, but in the critical moments Sergio should be undroppable. He gives harmony, organisation and control, and groups the team together through his passes and calmness.

6. Vidal, the other king of pressing

If Barcelona want to execute an orthodox positional play, Arturo Vidal may be far from ideal. Notwithstanding, if the Azulgranas want to press high and be aggressive, the Chilean is proving to be a very valuable tool for Valverde. Helping both in defensive and offensive transitions, he covers a lot of ground, adds an extra body in the penalty area, presses relentlessly, provides more presence between the lines and can force the defenders to keep an eye on him while Messi is free and not marked when dropping deep. One of his crosses led to Leo’s goal.

Barça’s improved and highly functioning pressing system was partly due to the multiplied efforts from El Rey Arturo. With Vidal as one of its main components, it was proved that the Catalans play better, are more reliable and have more chances of winning when they press high than when they are more passive and laid-back.

7. Modern football affected Barça in the most shameful way

The new format of the Spanish Super Cup brought more problems than solutions. Two teams that won nothing last season are the ones that will be playing the final on Sunday, in a different country to the one corresponding to the two national contests in question (La Liga and Copa del Rey). Dramatic. Regrettably, this is a sad reality these days. Modern football cares more about money and advertising than about what should really matter: the beautiful game.

One of the main protagonists of the match was VAR. This form of technology is used to help the referee make near-accurate decisions, and it had a relevant role yesterday in Jeddah. Two goals from Barcelona were disallowed: in the 61st minute to Messi, and in the 75th minute to Piqué. From a 4–1 win to a 2–3 loss. Unbelievable. If we’re strict, those two goals were rightly disallowed, but the extreme eye for detail and the literal definition of every millimetre counts probably ended up damaging the morale of the Barcelona players, who already saw themselves in the final. Then Atlético scored two goals in the last 10 minutes. Rubiales and VAR, symbols of this continuously evolving sport.

Barcelona 2–3 Atlético de Madrid: Match Review
What did you think of this article?