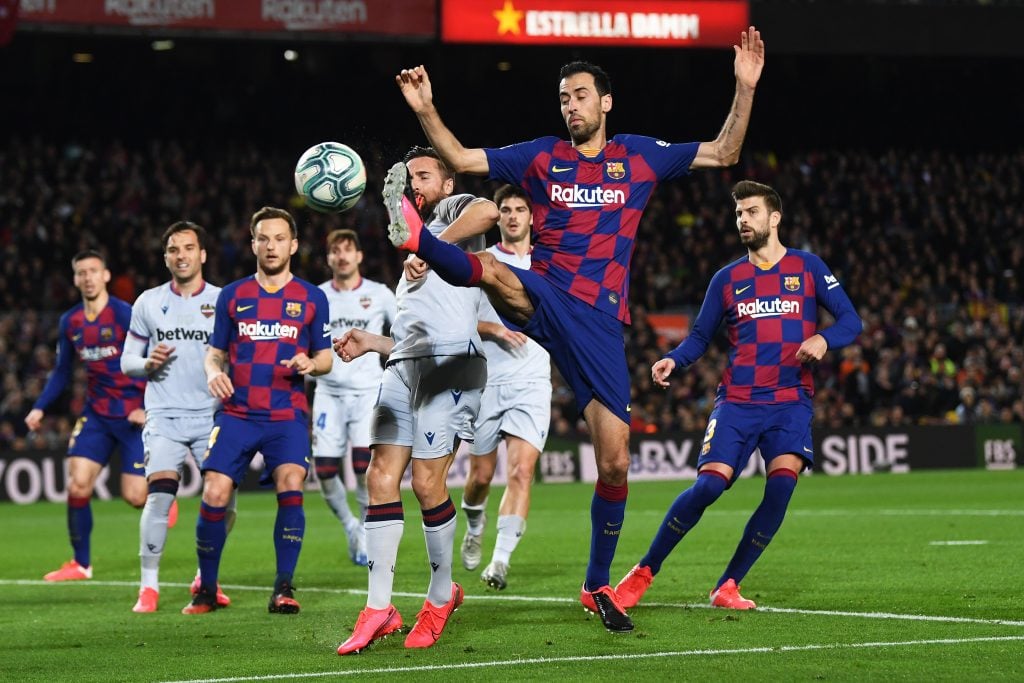 A beautiful match in the offensive facet but a terrible organisation and a waste of chances. Even so, two goals from Ansu Fati and a collaborative Messi gave the mandatory win to the Azulgranas. 5 takeaways from the Barcelona 2–1 Levante.

In the first leg of La Liga Levante managed to win 3–1 in their own stadium against Barça. The team that visited the Camp Nou yesterday, though, didn’t know that they were dealing with a new Barcelona. It was going to be complicated. Nor was it going to be easy planning a game after so many outings in the winter market. Remember that, with Carles Pérez’s departure, Setién has to wait for Dembélé to recover and have more tools in attack. In spite of all this, the Blaugranas were forced to obtain those 3 points. There were brilliant things during the game, and others that clearly have to be worked on, but little by little that winning mentality is appearing. Showing up next the 5 takeaways from the Barcelona 2–1 Levante.

1. Messi is having problems to score

The 6-time Golden Boot winner had serious problems to score. Messi attempted 10 shots of which 6 were saved by the Levante goalkeeper. Genuinely the effectiveness of the Argentine with the created occasions are almost perfect. It’s impressive that he didn’t score a goal. He had good chances that in other games he has scored on a similar play. Shots directed to the middle, others that hit the posts, others that lacked strength. He clearly didn’t have the night he usually scores many goals. Messi was the one who had more chances but not only him. The whole team generally had difficulty scoring. Griezmann, Ansu Fati, Semedo. Setieé has to work that effectiveness, especially in Leo who, with Suárez’s absence, the Azulgranas rely heavily on the Argentine to score goals.

We missed the goalscorer Messi but we got the assistant Messi. Don’t get me wrong, Leo’s game was wonderful. As usual. Only that he missed scoring chances that he doesn’t usually fail. Fortunately, Messi is more than just a goal machine. He’s a machine of any football statistics. The “10” made 7 key passes, won most of the duels he disputed, completed 8 (9) dribbles and assisted Ansu Fati in the only two goals of the game with passes that he only saw. Messi distributed those assists as a motorcyclist delivers the pizza. Too easy. Fati and Griezmann are playing with the game creator that every striker dreams of. Those assists put Messi in the top of the list of assists in La Liga (8). This is the first of the 5 takeaways from the Barcelona 2-1 Levante.

2. Semedo is pushing for the starting role

If there is a player who deserves more recognition than he has that is Semedo. The Portuguese made the best game he has done since he arrived in Barcelona. Yesterday’s game was a message that Semedo has to be an unquestionable starter. His speed, creativity, agility and even dribbling were key to yesterday’s victory. At some moments of the game, I didn’t know who was playing, if Nélson or Dani Alves. The n.2 show was brilliant. He was very close to scoring a goal in an incredible offensive transition where the Portuguese positioning was key. Everything was perfect, also the reception of the ball, the movement of feet and the quick reaction to shooting to find the goal. We missed one of the best goals of the Catalans this season.

Semedo delivered his best performance with the Azulgrana shirt

With Wagué’s departure and not signing any other replacement as Yan Couto there is no one to replace the Portuguese. Bad administration. Barça only has the young Dani Morer who has already been called in the first team in November against Leganés in La Liga’s first leg. The only problem is that at the moment there are no intentions to promote the young Spaniard. We also have to take Sergi Roberto into account, although thanks to his versatility I’m sure that he will fit in any position that Setién considers. Given all this and if we add the great game of the Portuguese, Semedo has a free way to get the position he deserves.

3. Barça conceded too many chances

Levante scored a goal in the last minutes. A strange goal that clearly had no intention of scoring a goal on that play. It was pure luck. Luck that they didn’t have minutes before. If they had been more effective, the opponent would have scored 3-4 goals with great ease. The culés gave the opportunities to Levante and it is not yet Christmas. Many losses of the ball. At the time of maintaining possession in the rival area, the defensive line gets ahead too much, especially the fullbacks, which is normal. The problem is that the players had a terrible organization, especially in the second half, which allowed great opportunities for Levante.

Barcelona was really lucky not conceding many goals but we cannot depend on the superstition. The reality is that the team is not ready to apply that style of play by positioning Busquets between the two centre-backs and making Alba and Semedo add depth. It’s what is needed but more work is also required. The approach is correct, the organization is not. We cannot afford to dominate the game in the rival area, having almost all the players there and losing a ball very easily due to a structure mistake. Let’s continue with the rest of the takeaways from the Barcelona 2-1 Levante.

Imagine being 17 years old, being a starter in the team you’ve always loved and that Messi assists you twice. Ansu Fati is living his dream. He left his mark again in the history of Spanish football becoming the youngest player in history to score a double in La Liga. Iconic. We saw a very mature Fati, who scored in plays where it wasn’t easy. In the first goal Messi gave him a magnificent pass, but the rest he did. The “31” used his body very well, kept calm and retained the ball very well to finish off the goal. A play worthy of a world-class scorer. On the second goal he dribbled off the defender and in a matter of seconds, he shotted without an angle to score the second goal. A fast and effective decision play. These two goals in just 2 minutes.

Ansu Fati won’t score a goal in every game, nor will he be the most important player on the team. He’ll make mistakes, fail clear plays and make very poor matches. Don’t put a lot of pressure on young Fati. Barcelona has a gem that has to be polishing calmly. A unique case that we have that is only 17 years old. It will continue to have prominence, playing great games like yesterday, but if it has a bad game we don’t have to claim anything. Fati was being criticized by the culé fans. Things are not like that. Better to enjoy and thank this player because in other circumstances, for example with a Neymar signing, Suárez and Dembélé healthy, among others, Fati wouldn’t have even minutes. It’s only the beginning of greatness.

5. Rakitić, at his own pace, is returning to what he was before

If we compare the 2016 year with 2019 and the beginnings of this new year, Rakitić is far from what he was before. He has never had the DNA of this club but always strived and had an enviable resistance that allowed him to play unreal numbers of games. There are factors that can affect like the age but it is not an excuse for the performances he was doing. The Croatian had several games being terrible in both attack and defense. He contributed nothing. Yesterday many of the fans were disappointed to see him in the initial XI, including me, but if I had known that he would do a great performance then I had preferred it that way. He pressed the rivals well, created good offensive transitions and ran back and forth without getting tired. We watched a vintage Rakitic.

“I have been going through tough times, but it’s a thing of the past now”

Rakitić will continue to have the participation he had. With Arthur and with Vidal’s return, the Croatian minutes are in danger. However, Setién is bringing him back to what he once was. Even if he doesn’t have many minutes, the least he could do is to try hard and do things right. Contribute in defense and attack as he used to. After the game, Iván made a couple of controversial statements about his departure of the club and the bad treatment he had with Valverde’s staff. Hopefully, the current circumstances are a motivation for Rakitić to raise its level. Although we shouldn’t rule out a possible exit of him in the summer, we must have the best Rakitić to increase the chances of winning titles. This is the last of the takeaways from the Barcelona 2–1 Levante.

Barcelona 2–1 Levante: Match Review
What did you think of this article?