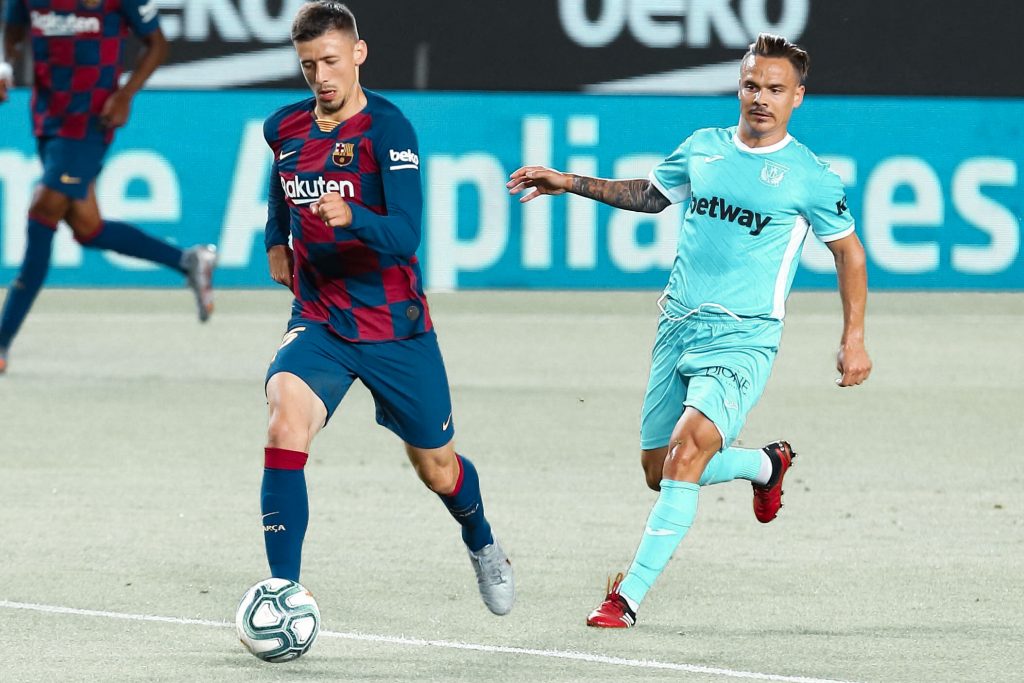 Barça had already returned but still needed to welcome back the Camp Nou. Against Leganés, it wasn’t the showtime that was expected. A goal from Ansu Fati, though, was the turning point for the Catalans to improve minute after minute until achieving three important points. These are 5 takeaways from the Barcelona 2–0 Leganés.

After the victory against Mallorca, Barcelona fans were able to draw the first conclusions from this La Liga return. A great result and performance at Son Moix, but work on the technical level was still required. For Tuesday’s clash with Leganés, and having the comfort of the Camp Nou, Barça was expected to be seen with more intensity.

However, Javier Aguirre’s Leganés stood firm and greatly hurt a Barcelona that lacked creativity and attitude during most of the first half. Fortunately, Ansu Fati appeared to change the rhythm of the game with a goal almost at the end of the first 45 minutes. Three points, a clean sheet and a good display from several players, but still a certain lack of ideas. 5 takeaways from Barcelona 2–0 Leganés.

1. Suffering in the first half

Leganés gave problems to Barcelona by staying very compact in the centre, usually with eleven men behind the ball. This same approach had already caused Barça headaches in the 1–1 draw against Napoli in the Champions League, or in Quique Setién’s first game as the Barcelona coach against Granada. A system that in every way hurts the azulgranas. Not because of the philosophy of the Catalans, but because of the execution. Since the end of 2018, a flat Barcelona is seen without inventiveness, something that is easily exploited by the type of approach that Leganés chose.

❛ It was a complicated match because the Leganés players closed the spaces and they were very defensive. We still aren’t at our best in controlling the ball and getting it forward ❜

Names like Luis Suárez, Martin Braithwaite, Arturo Vidal or Riqui Puig were on the bench. It was necessary to give some rest, but, at the same time, it took away that energy spark from the team. This lack of intensity caused Setién’s men to find no opportunities in the opposing box and Leganés took advantage of counter-attacks. Happily, the defence was very solid, but these type of mistakes could have greater consequences through the remainder of the league.

Since Ansu Fati’s debut at the start of the 2019/20 season, opinions regarding him have been polarised. Some say that he is ready, others that he must not be rushed. There are many opinions, but there is something that is not relative and that is the raw truth. Ansu Fati may lack regularity, which is understandable for his young age. Nevertheless, his technical ability has often allowed him to stand out as a teenager, not only with brilliant plays but also with goals. Against Leganés, when the team needed it the most, the young Fati appeared with a goal full of quality.

Ansu Fati, one of Barcelona’s saviours | Photo by Alberto Estevez via Imago

On the other hand, it is true that the number 31 didn’t have the ball much, but when he participated he always had dynamism, a good control and confidence. Without a doubt, all this could be witnessed with the goal he scored. Ansu received the ball in a very difficult position and made a decision in a matter of seconds. Surrounded by about four defenders, Fati stood firm and shot in between them with the confidence necessary for that ball to find the far bottom corner. Fati this, Fati that. Meanwhile, the young 17-year-old continues to demonstrate his level match after match.

Big schedule. Big rotations. One of my main doubts with the return of La Liga was whether Quique Setién was going to perform many rotations. Every team has to make them during this period after such a long time out. Thus, Setién made five changes in the initial XI in comparison to the last match. Junior Firpo was given a chance for the suspended Jordi Alba. On some occasions Junior seemed nervous in defence, although in general he had a good display. Highly offensive, with clarity and assisting Fati’s goal through his tenacity. Clément Lenglet returned too and was one of the best of the match. He saved Barcelona on more than one occasion and participated at a collective level.

Moreover, Iván Rakitić and Arthur Melo started alongside Sergio Busquets. The Croatian was great, managing and measuring the spaces very well. On the other hand, Arthur added the missing rhythm to the ball circulation. Ansu Fati was also part of this rotation, undoubtedly being totally successful. In the same way, in the second half Setién rested Sergio Busquets, Sergi Roberto and Gerard Piqué, who had a knock, and that was when Quique fulfilled the wish of all Catalan fans: to watch Riqui Puig. Riqui received a valuable chance and knew how to take advantage of it. Always very participative, with energy, breaking lines as well as having two clear chances against the goalkeeper. The goal will have to wait.

One of the centre-backs that has shown most consistency and a greatest level throughout the campaign is Clément Lenglet. He was one of the reasons why Barcelona kept a clean sheet last night. He avoided and saved the blaugranas from conceding a goal on the line. Additionally, he spent the whole duel reading the rivals, anticipating himself effectively, keeping the right distances and doing a great job in his positioning. His cold blood, concentration during the 90 minutes and maturity made Lenglet have a night in which he was vital for the victory.

Not only in defence, but in attack he was also important. Clément had the initiative to send distant passes to Antoine Griezmann and Ansu Fati. Unfortunately, the attacks didn’t go any further, but the intention existed. He also combined very well with the line of midfielders and made 124 passes with a 96.9% success rate. Busquets and Arthur combined made 136 passes. Lenglet almost got close to that mark. The Frenchman is more than a centre-back.

Another game, another disappointment from Antoine Griezmann. The Frenchman started in a front three made of him, Ansu Fati and Lionel Messi, with Antoine being the centre-forward. Of course, the Leganés system didn’t favour the former Atlético de Madrid player, though his contribution was little with or without a ball. Griezmann completed just 15 passes in the 90 minutes he played. Riqui Puig, in just 20 minutes, was more participative.

It is not possible that Griezmann, with all his talent, is incapable of contributing and looks so uncomfortable when searching for the ball. There must be something wrong here. Is it Quique Setién’s approach? The environment? The player? The position? We do not know, but something needs to be worked on.

❛ Many players, like Griezmann, suffer when there are no spaces to play in. Despite that, Antoine had a great game ❜

At least, the teammates started looking for Griezmann more often after seeing Ansu and Messi surrounded by defenders. Antoine received balls from Busquets, Piqué, Messi and Rakitić, mainly. These passes generally failed in precision, though. Perhaps this affected the performance from the Frenchman, but he didn’t show much improvement at an individual level either. The number 17 did score a goal, but it was disallowed after Nélson Semedo, who assisted him, was previously offside. Goal or not, Griezmann was very silent, and this has sadly been the norm this season.