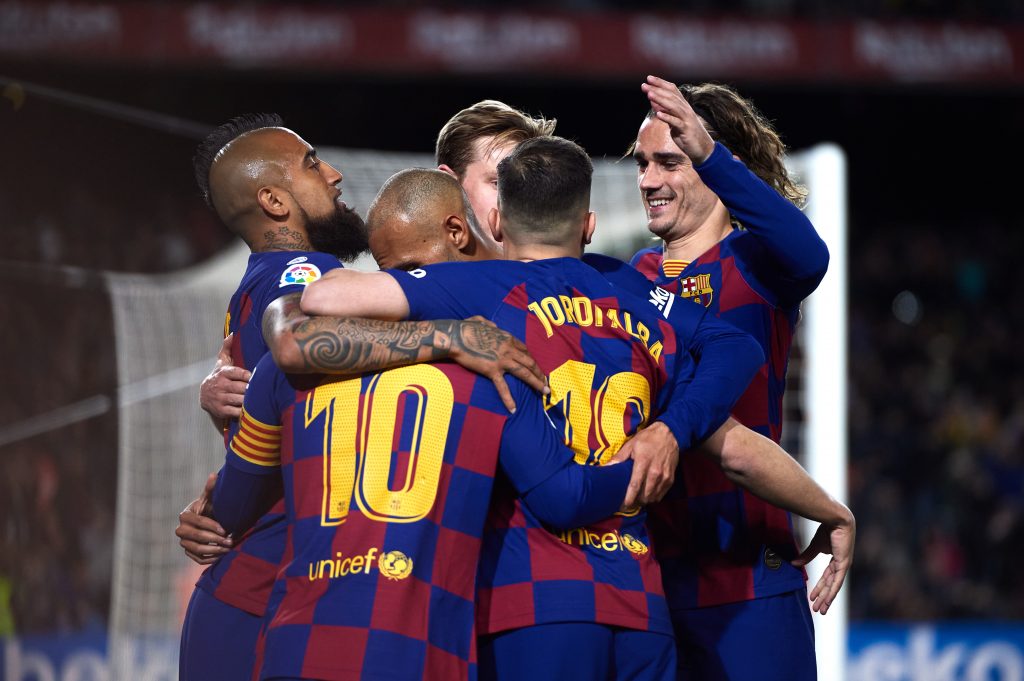 It wasn’t the best game, the team didn’t score many goals but obtained 3 important points. A victory against one of the most difficult rivals to add motivation to the Azulgranas. However, there is much to learn. 5 takeaways from the Barcelona 1-0 Real Sociedad.

Following the painful defeat against Real Madrid and the difficult race for the leadership in La Liga, the Catalans were forced to win the remaining 12 matches in the competition. The first challenge was Real Sociedad. A duel against a team that had an unbelievable run of 9 wins in 10 games. Although Barcelona maintained possession of the ball, found good spaces and the ideas were good, the intensity of the players was lacking. A very leisurely game that lacked attitude and an accelerated pace. The performance wasn’t spectacular but we got the much needed 3 points. A victory that injected a dose of motivation to a team that needed it. 5 takeaways from the Barcelona 1-0 Real Sociedad.

With Arthur’s recent injury and considering that Busquets and De Jong had high chances of starting the game, Setién had to choose between Vidal, Rakitic, Puig, and Collado. After Vidal played the two previous games and Rakitic’s poor performances recently, this was the time of the young La Masia players. Against Real Sociedad it was necessary to dominate in the middle of the field and what better way than to do it with a house brand player. However, the Culé coach chose Iván Rakitic to start the match. A serious mistake. Although the Croatian was in the first half slightly higher than in his last appearances, he still lost many balls.

In the second half, we all expected to see one of the two young midfielders. Or at least, Ansu Fati. Meanwhile, La Real was reinforced with fresh legs, Barcelona continued to wear down its players. The changes didn’t come. Until Vidal entered the field in the minute 74 instead of Rakitic, we realized that the dream of seeing Riqui or Collado was over. Later on, Fati entered in the 85th minute. Very late changes and without putting those that could work better. Puig was 25 minutes warming up and didn’t receive the opportunity. Something that didn’t make much sense. If we want to win La Liga we have to trust La Masia players. Let’s continue with the rest of the takeaways from the Barcelona vs Real Sociedad game.

2. Braithwaite is the weapon that the attack needs

Who would say that our emergency signing would end up being a very important asset for Barça. He doesn’t have a great talent, nor a great name like Griezmann’s, but it fits perfectly in what Barcelona needs. His ability to search for space, his physical potential, his ability at the first touch, overflows but above all energy and great attitude make Braithwaite a very important player. Without a doubt, he was one of the best players in the game. Everything the Blaugranas lacked was compensated and balanced with the Danish player. Perhaps the only thing that could improve is its continuity to play at a great level the 90 minutes.

The immediate impact Martin is having on the team is being key to the team. Someone regular that his performance doesn’t depend on how the team plays. Someone who has the ambition to win. Braithwaite is an unpredictable player whose first play option is almost always the right one. He doesn’t look for Messi as the first option but surprises the rivals by doing what no one expects. The Danish player will be important in the remainder of the season and even when Suárez and Dembélé return from their injuries. For now, let’s continue enjoying his great game.

3. Piqué more leader than ever

Like all seasons, the time comes when Piqué goes from being an average player to being the defensive leader of the team. At the beginning of the season, he used to make unforgivable mistakes, without energy and very static. Against Real Sociedad, he showed that the moment in which Piqué was transformed had arrived. A majestic performance, that if it weren’t for its energy or its quality, probably La Real would have scored. While the rest of the team lost character, Piqué maintained the attitude.

Despite having had discomfort before El Clásico, Gerard is still standing and knows the current situation of the team. He knows that he has to take a step forward and that he must show sacrifice. We’ll see him in the remaining matches along with Lenglet or Umtiti but I’m sure that he will play each and every one of them. Piqué is generally criticized for its low intensity but when he catches the right rhythm there is no stop. Setién has to take advantage of a Piqué who, despite the years, has the illusion of winning La Liga like a La Masia kid.

4. A victory that’s worth gold

Barcelona needed these 3 points, more than getting closer to the leadership, to give faith to a team that needs it. With so many difficulties, with the current atmosphere, a victory against one of the best teams in La Liga worth gold. Above all, more confidence for Messi with that heroic goal to win the match. With the “10” having a good performance, the team has a better chance of winning. Not because we depend solely on him, but he’s our best player and Setién has to take advantage of the best weapon in the team. However, resting him in the next fixture would be an excellent choice.

Now there are 11 rivals left for trying to win in La Liga. The Azulgranas already passed the first test of that couple of complicated teams that they had to face. The next two matches in La Liga are against Mallorca away from home and Leganés at Camp Nou. But it remains to visit the Sánchez Pizjuan and face Atlético Madrid at home. Difficult but not impossible.

5. The approach was correct, the intensity was not

The Blaugranas played a very good game in terms of the approach, but the attitude of wanting to win was lacking. The players were often seen without motivation. The Catalans dominated ball possession, found good spaces, there was verticality, but there was no intensity, no energy. Only minutes before and after the goal we appreciate a little more attitude. Moreover, the team failed again with efficiency. In the first half, there were clear occasions for Messi and Braithwaite that couldn’t be finished in the best way. We cannot fail those goal chances.

“The club in crisis? I care about the team. The team is strong mentally, we come from a painful defeat but we are emotionally well and that is what matters

To win games before tactics you have to want to compete and get the victory with intensity. Yesterday we saw a team totally off. There are numerous situations that the club is currently experiencing both internal and external factors. However, we are still candidates to win La Liga and we are still alive in the Champions League. The Catalans cannot ignore those competitions. Nonstop. It won’t work all the Setié’s gameplan, although sometimes he fails in the substitutions, if afterward the players don’t do their part. This is necessary to win, at least, one title this season. These were the 5 takeaways from the Barcelona 1-0 Real Sociedad.

Barcelona 1–0 Real Sociedad: Match Review
What did you think of this article?