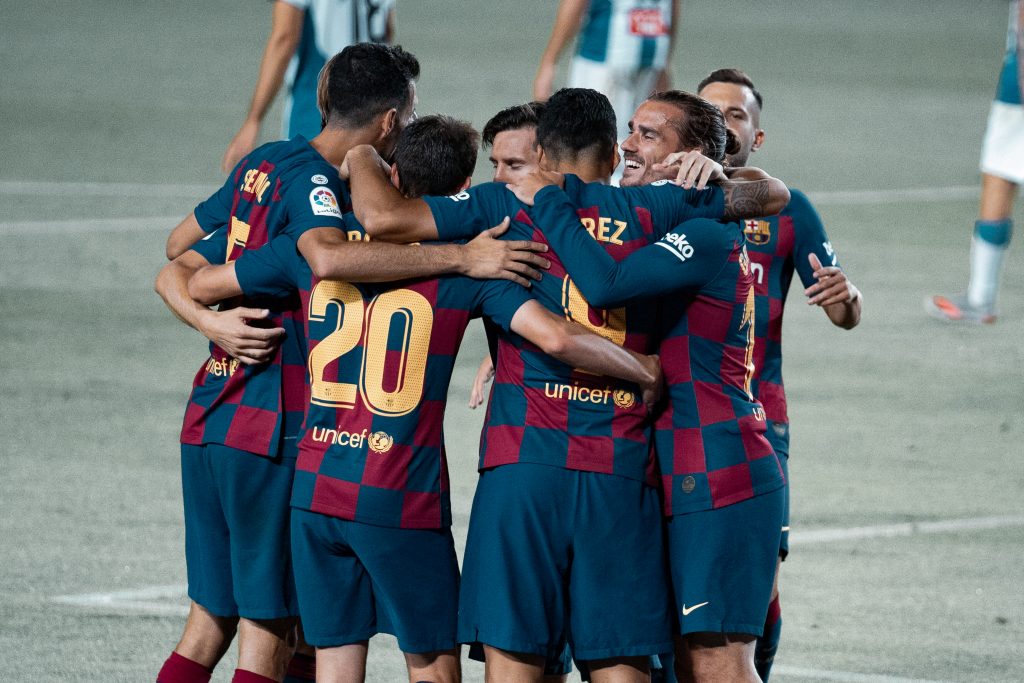 After the showtime against Villarreal, expectations were very high for Barça as they faced Espanyol. However, the level displayed was far below expectations. In the end, three important points, but with much left to improve. These are five takeaways from the Barcelona 1–0 Espanyol.

Against Villarreal on Sunday, the feelings that Barcelona left were almost perfect. That’s why, against Espanyol, fans did not expect less. After five consecutive defeats and an extremely subpar season, Espanyol were heading to an inevitable relegation. But it was still a Catalan Derby, and the locals could not relax. As expected, los Periquitos came out to the pitch with a very defensive approach, except for the final ten minutes. Meanwhile, Quique Setién’s Barça repeated its 4–3–1–2 that had worked so well in the previous match, but in Wednesday’s duel the team had many problems in creativity and generating danger.

Fortunately, all of these issues gradually improved in the second half, albeit without glitter. However, a goal by Luis Suárez, and great performances by Marc-Andre ter Stegen and Clément Lenglet, were enough to get the three points and officially relegate Espanyol. Now, for the blaugranas it remains to spot and work on their mistakes. These are five things we learned from the Barcelona 1–0 Espanyol.

The 4–3–1–2 was the system Quique Setién had chosen against Villarreal and that had been a complete success to get the best out of multiple players. Without wingers, but with a great job from the full-backs that day, it was enough to generate enough width and spaces. Villarreal is an offensive side, and they always like to have the ball. Similarly to Barcelona, though, they struggle a lot to recover the ball and focus more on long spells of possession. That’s why that scheme made the Catalans have a near-perfect game on Sunday. Nevertheless, it did not go as well as expected in the duel against Espanyol.

Espanyol, due to their limitations and struggles, have opted for a more defensive approach in the second half of the season. Given this type of scheme, it takes a lot of width and speed on the ball to find spaces. Otherwise, it is almost impossible to even be able to shoot at goal. In fact, Barça did not make a single shot on target in the first half.

Barely enough to get the victory, but certainly not enough to entertain | Photo by Lluís Gené / AFP via Getty Images

Moreover, Jordi Alba and Nélson Semedo, who were great at La Cerámica, did not have their best day on Wednesday, and Barça did not have enough threat on the wings. Happily for the locals, this changed when Espanyol’s Pol Lozano was sent off early in the second half. And although Barcelona were also playing down to ten with Ansu Fati also shown a red card, there were more spaces with ten vs ten than with eleven vs eleven.

2. Marc-André ter Stegen is always there when things go wrong

Surreally, Espanyol had more clear cut chances than Barcelona and almost achieved a goal. Although the locals finished with a clean sheet, this was largely thanks to Marc-André ter Stegen. The German goalkeeper, again, transformed himself into a wall to prevent the rivals from scoring. While Luis Suárez managed the winner, without Ter Stegen this match would have had a completely different result.

“We knew it was going to be difficult. We knew their [Espanyol’s] situation. We have to be aware of the fact that we put in a great performance on Sunday [against Villarreal] and were still feeling the consequences of that physically. The important thing is to win and to get three more points”

Like all heroes, Marc-André also needed support. Luckily for him, Clément Lenglet and Gerard Piqué did an almost impeccable job. Piqué was very aware to stop Espanyol’s attacks, led by Raúl de Tomás. On the other hand, Lenglet, despite being unusually out of position a couple of times, was essential thanks to his ability to block shots. All two centre-backs plus keeper combined so that no rival could find an easy opportunity inside the box and score.

3. Riqui Puig is needed for this type of games

From minute one, supporters knew that this match was tailormade for Riqui Puig. His characteristics, such as his speed in moving the ball and across the field, his ability to break lines and his great impact in the final third, made him look like the key to unlocking Espanyol’s defence. After the first half, the most obvious introduction, and the one all fans were asking for, was that of Riqui Puig. Still, the minutes passed by and Riqui kept warming up. In the end, he didn’t play a single minute.

Yes, the azulgranas took the victory, but they were also very close to not getting it. Perhaps Quique Setién was wrong in not giving minutes to the 20-year-old, or perhaps he did consider it but Ansu Fati’s red card changed his plans. Yet the truth is that Riqui has proven time and time again how essential he is for Barcelona when they desperately need a spark of imagination from midfield.

4. This time Sergi Roberto didn’t shine as much as an interior

In recent years, the versatility of Sergi Roberto, a natural midfielder, has allowed him to operate frequently at right-back. However, with Nélson Semedo’s form and Frenkie de Jong‘s absence, Roberto has been used as a left interior in the last couple of games. Against Villarreal, Sergi was one of the best performers. Defensively he added support and numbers, and in attack he perfectly connected the lines and looked for the free man. Arguably his best display as a midfielder. Facing Espanyol, Quique repeated his method, although it was not what was expected.

“We have not had a great match. They have made it difficult for us in defence. We have not found spaces nor have we had precision to handle ourselves”

Without the help of the full-backs, yesterday Sergi Roberto could not carry the ball as much as, due to Espanyol’s compact block, he was more static. He had a lot of trouble in activating himself when receiving the ball, making the game predictable and slow. Nonetheless, in the second half Sergi moved to the right-back position, since Semedo was subbed out. In that position, the Catalan regained his form and ended up being one of the best in the match from the right side. He was a great asset when the team began playing with ten men.

Ansu Fati continues to break records, but this time it was a negative one. Against the Blanquiazules, he became the second-youngest player in La Liga history to be sent off. During the match, Barcelona needed Fati on the pitch as soon as possible to generate width and open up spaces. To the fans’ delight, number 31 was subbed on at half-time. Within seconds, though, he saw a red card. It was a tough and dangerous action as, in spite of touching the ball first, he then hit Fernando Calero in the leg.

This suspension means that Ansu will not play the next clash against Real Valladolid. Valladolid are one of the teams that have conceded the least goals this season, and it is worrying that the 17-year-old winger will not be able to be part of the duel. The good news is that, apart from Martin Braithwaite, there is Álex Collado, who could act as a winger and fill in such absence. But will Setién trust the young Collado?