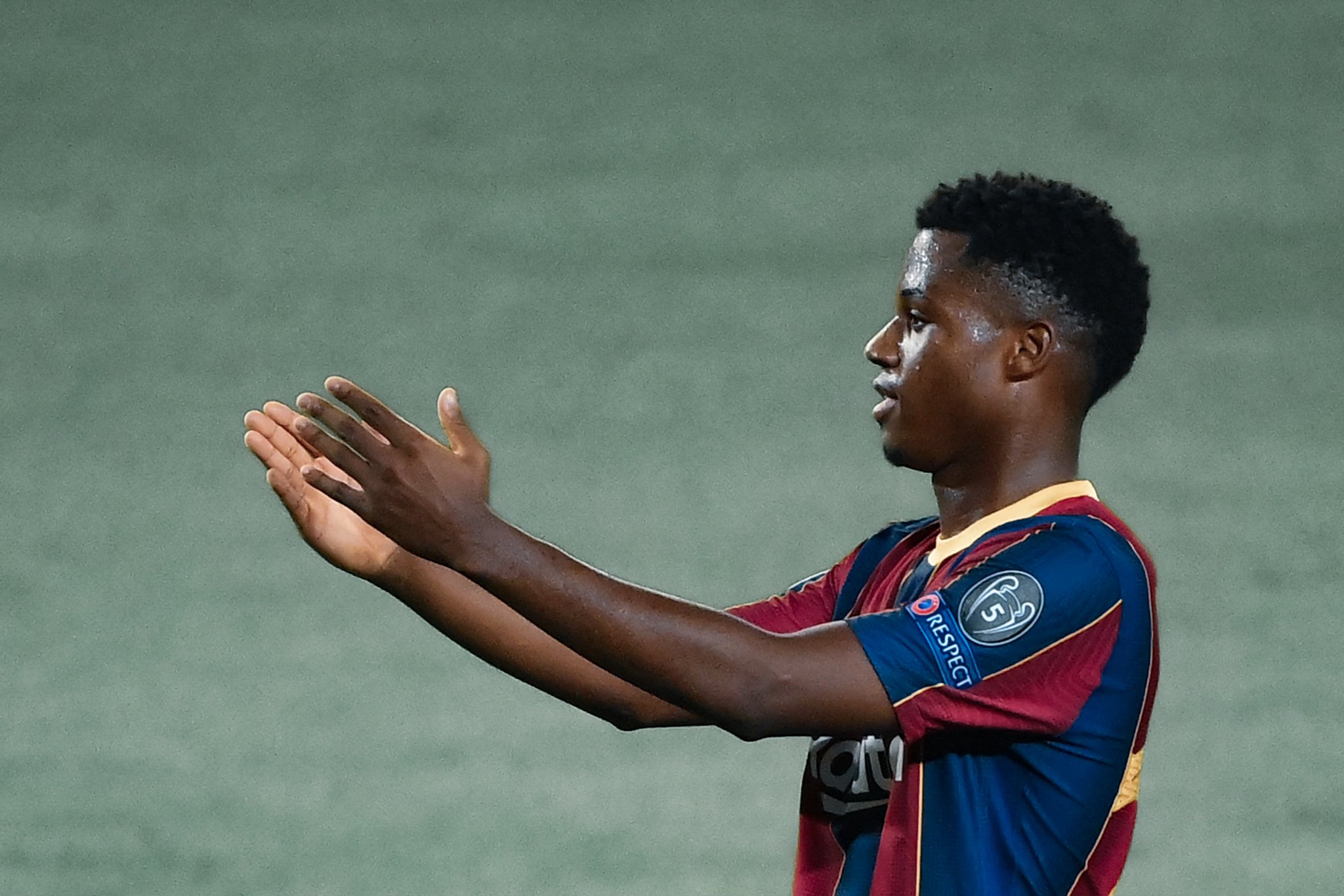 With Ansu Fati’s injury interrupting his rapid rise, Barcelona will have to find alternatives to fill the young starlet’s boots.

Ansu Fati has fast become an undisputed starter at Barcelona, and Ronald Koeman is clearly impressed by the 18-year-old’s irrefutable quality. Fati has started eight out of ten games for Barça in all competitions so far. Netting five goals and notching two assists, the youngster has been enjoying some incredible performances of late.

In Saturday’s 5-2 win over Real Betis however, the forward seemed to have some discomfort in the process of winning the penalty, which meant he was taken off at halftime.

“Fati had some discomfort in the first half, and we replaced him at half-time so as not to take risks.”

Tests later revealed that he had sustained damage to the meniscus of his left knee. Barcelona announced in a club statement that Fati would undergo surgery for the injury. Once the procedure is complete, there will be another announcement about the duration of the injury layoff, estimated to be around 3-4 months.

This comes as unfortunate news for the club and its fans, as Ansu Fati had been a major positive amid all the inconsistencies since the season began. Now, the Blaugrana must find other options to count on in the Guinea-Bissau born forward’s absence.

Barcelona does have a few solid alternatives, and therefore combinations at his disposal when it comes to selecting wide men, even in the absence of Ansu Fati.

The permutations to deal with Fati’s injury

There are three main candidates who will most certainly see a lot more game time during the Fati’s injury layoff. Namely, Pedri Gonzalez, Ousmane Dembele and Francisco Trincao. Considering Koeman’s lineups so far, however, it is all but guaranteed that he will rotate a lot between the three.

Koeman does not have a lack of quantity for wingers in the team. (Photo by LLUIS GENE / AFP)

Pedri has been lighting up the pitch for the Catalans. He seems to be adjusting very well to the club and Koeman’s ideas. As a result, he has started four of Barça’s last five games. His ability on the ball has seen him being deployed out wide a few times already.

Dembele’s return to action after constant injury troubles has also been auspicious. The Frenchman is slowly regaining sharpness and has netted thrice already in all competitions. And while Trincao is yet to score for his new club, he has shown some encouraging signs. Now might well be his time to shine.

Albeit Pedri has started off on the right a few times so far, he might be very useful on the left as well. He would be able to cut infield on his favoured right foot and dictate play. Additionally, he was superb against Juventus every time he received the ball on the left. This would mean Dembele starts on the right, able to wreak havoc in his natural position.

With Pedri again operating on the left, Trincao could come in on the right. The Portuguese winger has already shown glimpses of promise. With his intelligent link-up play and close control, he could be a real asset for players like Lionel Messi and Antoine Griezmann in the centre to play off of.

One of Ousmane Dembele’s biggest assets is his ambidexterity. The 23-year-old can as frightening on the left, as he is on the right. And having already played on the left a few times before, the position isn’t completely alien to him.

A Dembele-Trincao combination is interesting in many ways. Since Trincao was accustomed to playing anywhere across the frontline during his time at Braga, either one of him and Dembele can play on either flank or keeping motoring to switch. This will create unpredictability in the process, making them laborious to mark.

Of course, when you talk about wide men, you have to put Leo Messi’s name into the mix. Messi, of course, is an obvious option to start on the right. However, in Koeman’s current setup, him operating behind Griezmann seems to be really beneficial in terms of cohesion and chance creation. Additionally, it allows for more opportunities for youngsters.

Phillipe Coutinho however, will pose an interesting question after returning to the team. The Brazilian is currently recovering from a hamstring injury and is scheduled to return to action by early December, depending on the progress of his recovery. Once Coutinho is fit, he will feature a lot more as well, either on the left or in an advanced central role, which could mean Messi moves back out to the right.

However, if the setups with Messi and Griezmann continue to thrive with the youngsters’ support out wide, there will be a lot of healthy competition when everyone is fit. For now, it is time for them to prove their mettle, hopefully, while Ansu Fati’s injury heals as soon as possible.

From what we have seen so far, none of the wingers apart from Fati have provided serious stronghold on the starting spot. Stemming from that, Koeman has had to mix-up his options on the wing, deploying all of his forwards on either wing at least once.

This can be traced back to Coutinho on the left, Pedri on the right, and left, Messi on the left against Dynamo Kyiv, and of course, Griezmann on the left during the initial phase of the season.

Dembele should be a nailed-on forward at this point. (Photo by Josep LAGO / AFP)

At 23, is it crucial that Dembele gets playing time, not only because he is the most similar to Fati, but all because his dynamic range on the ball make him a threat on either side.

Ideally, on form, Pedri should partner the Frenchman. Given his age and Koeman’s mismanagement of young assets, the combination of Fransisco Trincao on the left, with Ousmane Dembele on the right would benefit the team the most.