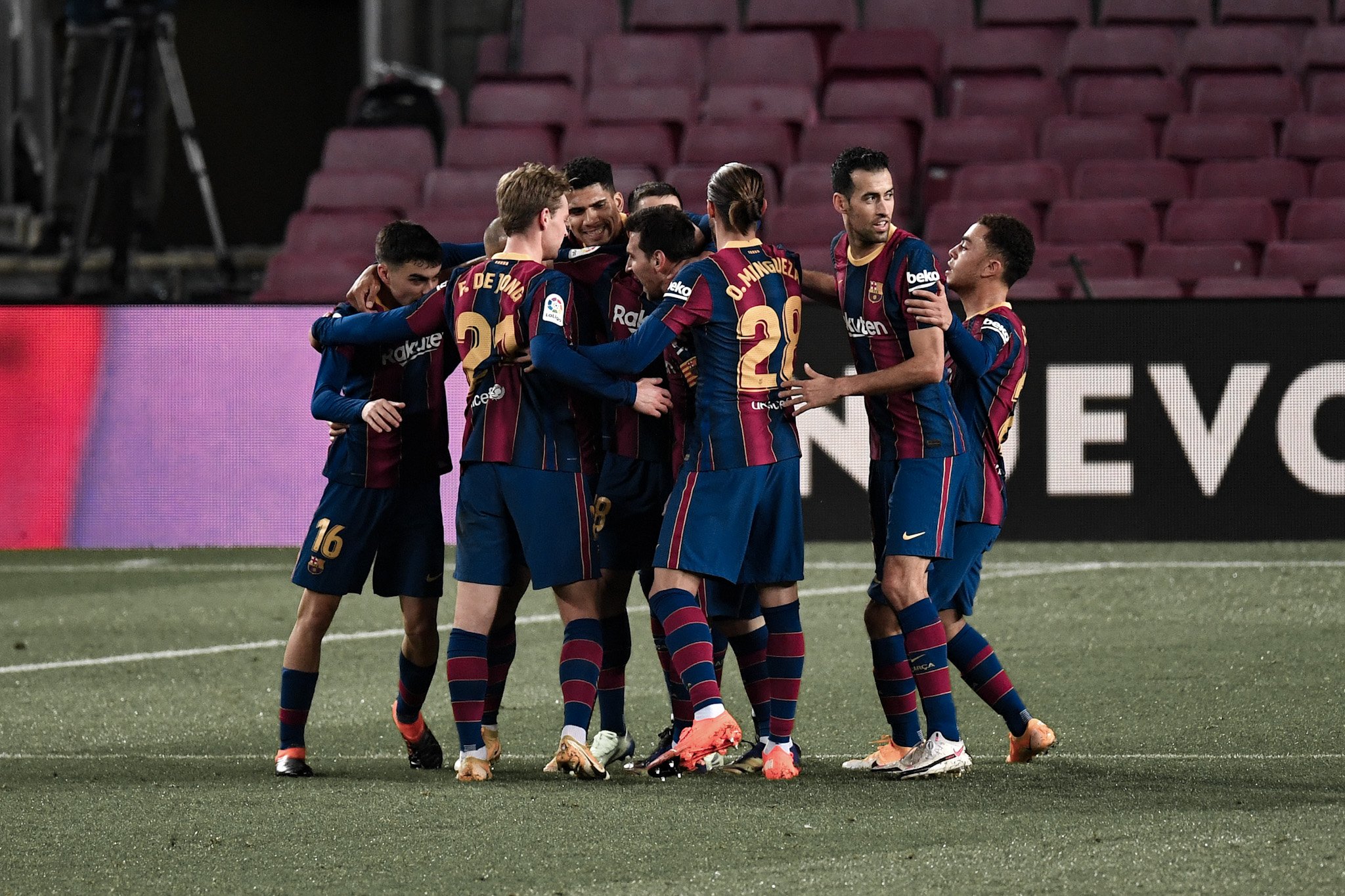 An encouraging 2-1 victory against Real Sociedad breathed some life into the club as Ronald Koeman salvaged a victory in one of the most significant games of the season, beating a side that had asserted it’s claim as table toppers in La Liga.

While a mediocre second half almost overshadowed the immense fluency and aggression Barca showcased in the first half, the change in system and inclusion of unfamiliar faces certainly proved to be optimistic signs. With Valencia up next, the Catalans must ensure they continue with the same mentality and are not fazed by the difference in the environment, producing a similar performance on the road as well.

1. Araújo the yin to Mingueza’s yang

Throwing shades of the iconic Piqué-Puyol partnership, Ronald Araújo and Oscar Mingueza formed an imperishable coalition at the heart of defense, maintaining excellent composure and coordination, which enabled the duo to successfully keep Real Sociedad’s nifty forwards at bay.

In recent encounters, there was a growing consensus that Clement Lenglet was passing through his worst patch ever as a Blaugrana, faltering in Piqué’s absence and floundering about like a deer caught in the headlights. In spite of being deemed as Barça’s leader at the back, his decline in displays were far too perceptible to go under the radar.

Subsequently, this paved way for La Masia pearls – Araújo and Mingueza – to form an alliance in defense. Ronald Koeman made a ballsy decision playing two inexperienced center-backs, especially in a high magnitude game where any lapse in judgement would result in dire consequences, but his bravery bore Barça fruit immensely with the defense looking solidified and perennial throughout the entirety of the match.

Araújo’s clearances and excellent anticipation of strikers, paired with Mingueza’s positional maturity proved to be quintessential in the hosts’ 2-1 victory. Simply put, Araújo was the yin to Mingueza’s yang. They complement each other terrifically, breaking down opposition plays through their astute presence and prevailing due to their diligence at the back. Having already played together at the B team last season, their on fleek chemistry came to light on the big stage.

Although the duo could certainly make do with better distribution of the ball and are yet to refine that the facet of their gameplay, Barça, for once, appeared to be shatterproof in their most criticized department. Signs of better days to come.

Up until this encounter, Barcelona had failed to win a single match after going 1-0 down. However, to Ronald Koeman’s credit, the club finally seemed to have fixed their enervated mentality and struck right back after conceding a goal from Willian Jose.

In the first 45 minutes, the Blaugranas managed to create chances in abundance and their build-up play looked refreshingly immaculate. While facing a team that did not employ a low block worked to Barca’s advantage substantially, the club’s improvement must surely not be undermined, given the liquified occupation of spaces Barça presented.

The formation wasn’t the usual 4-2-3-1, but rather a 4-1-3-2 with Busquets as a pivot and third center back, while De Jong and Pedri operated in roles further up the pitch. The Catalans’ positional adaptability enabled them to play with a great deal fluidity. As a result of their sheer dominance, Koeman’s men slotted two well-worked goals past Alex Remiro.

Nevertheless, after proceedings, the club appeared to have completely lost the plot. Instead of attempting to extend the lead, a more conservative approach was put into practice, which has – in recent times – not proven to be ideal. Defending leads early in the game have always ended up stabbing Barcelona in the back, and a significant decrease in dominance in midfield allowed Sociedad to look more like themselves.

The visitors had turned over a new leaf after the 45-minute break, reflecting their position on the league table with Imonal’s men remaining on the ascendancy for a majority of the half. Whether the Catalans were conserving energy for the demanding schedule that awaited them or the opposition proved to be a tough nut to crack, it was apparent that Sociedad dictated the flow of the game in the second half. Ronald Koeman’s controversial substitutions certainly did not help either.

If Barcelona intends to compete with European heavyweights and have any ambition of competing for the La Liga title, such a drastic decline in intensity cannot be tolerated. From minute 1 to 90, Barca must showcase their best level.

3. Frenkie de Jong is getting his mojo back

Consistency is an element Frenkie de Jong has habitually struggled with. Oftentimes a promising performance is followed by an underwhelming exhibition, as has proven to be the case numerous times this season. However, De Jong finally seems to be getting back to his groove, bursting in confidence and playing like the maestro he was known to be at Ajax.

A major reason for the Dutchman’s spike in confidence and enhancement in performances have been his subtle tweak in positioning. Instead of entailing a rigid double pivot system alongside Sergio Busquets, Frenkie now has the authority to express himself between the lines, operate with more freedom and highlight his outstanding spatial awareness. Under Koeman’s more mobile and direct system, Frenkie finds himself considerably liberated to dictate plays and influence different phases of the build-up.

De Jong has always been a player that thrives when he has the jurisdiction to spring up-field and combine with the front-line. Paired with his brilliant reading of the game, he manages to time his runs with perfection. As he constantly linked up with Messi and slipped into dangerous territories, eventually, the former Ajax man was rewarded for his efforts on the field with a neat one-touch finish, one that sealed a 2-1 victory for his side.