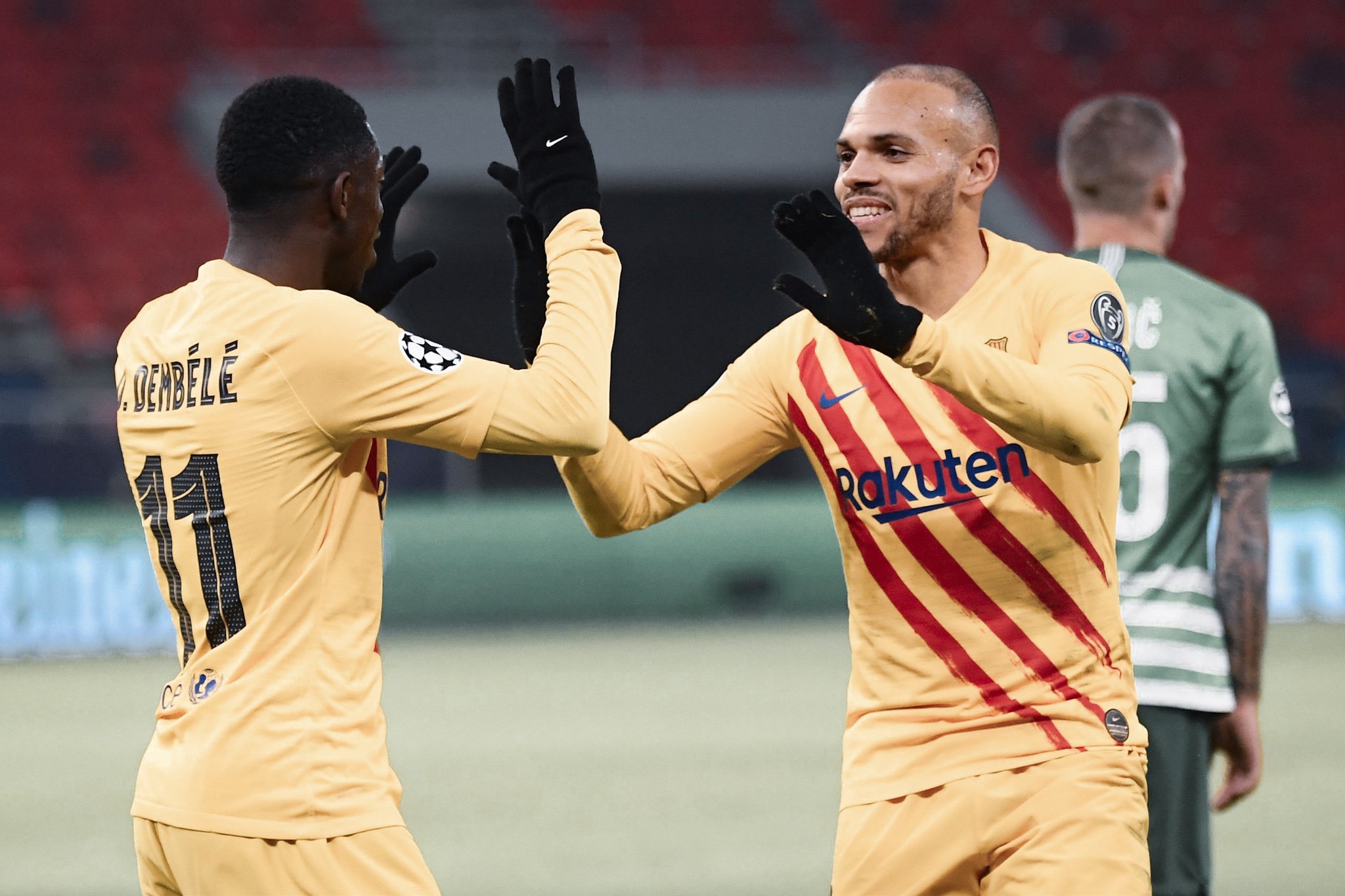 After a lively first half worthy of endless praise, a significant drop in intensity saw Barcelona lose their wonted dominance after proceedings. The moment Ferencvaros began to challenge Barça in the possession charts, the club’s defensive vulnerability became considerably evident, with the Hungarians not showing any signs of backing down.

Nonetheless, although this result could have been far more convincing given the substantial amount of chances the Catalans had at their disposal, there are still reasons to be optimistic about this win. For large portions of the game, Culés bore witness to vintage first touch football from Barcelona, everything you could really ask for from a team without the likes of Lionel Messi, Philippe Coutinho and Marc-Andre ter Stegen.

Albeit the second half slightly blemished this promising away game performance, consistency is not only Barcelona’s way of playing; but also performances is building a great deal of momentum a1s Ronald Koeman’s side enter the crucial stages of the season.

From being a Middlesbrough reject to occupying the number 9 jersey at Barcelona, Martin Braithwaite has proven to be the personification of started from the bottom; now we’re here. While he won’t dazzle spectators with stellar goals or flashy dribbling, the Dane’s game awareness is top-notch and he sure as hell knows how to pack a punch inside the box. With Ronald Koeman tasked to start the 20/21 season with no real number 9, Martin’s worth in this role is turning out to be invaluable.

What’s most staggering is that the former Leganes man is not only bearing fruit for his efforts on the field but also playing an indispensable role for his partners in crime. Blessed with the instincts of a “street smart footballer”, Braithwaite can manipulate centre-backs, lure players and open spaces, which help him act as a reference point for the entire team upfront, particularly Griezmann, who seems to have found his best version featuring alongside Martin. In addition, his tendency to be attracted to spaces rather than the ball allows every ball-dominant player around him to thrive.

Against Ferencvarós, Braithwaite continued his flawless goalscoring form, yet again inscribing his name on the score-sheet through a neat finish. After missing a few prominent scoring opportunities, the 29-year-old put his poacher’s knack to excellent use as he converted a terrific Dembélé cross into the back of the net.

However, the Danish sensation wasn’t quite done yet; shortly after, he executed a piercing run into the opposition box which saw him in a one-versus-one situation with the keeper, but a rash foul on him led to the Catalans salvaging a penalty.

Once deemed as a liability, Braithwaite’s sheer commitment towards the club has now enabled him to find a place in Koeman’s starting XI, proving to be the missing piece in the Dutchman’s puzzle. As he continues to work in silence and score goals for fun, it’s high time Braithwaite begins to receive the appreciation he has warranted. At this point, it’s fair to claim that he is exceeding expectations, not just for the goals he’s scoring; but also for his work towards those goals.

2. Griezmann is finally coming out of his shell

Taking a look at the mechanical side of things, it’s obvious Braithwaite’s inclusion has done a world of good for Antoine Griezmann. Starting alongside a reference point with minimal demands and exceptional attacking quality has enabled the Frenchman to play second fiddle to Braithwaite effectively.

However, more than anything, it seems as if Griezmann has broken free from the shackles that held him back previously. Ever since the former Atletico man has arrived at the club, he’s fought numerous battles against the media, fans and even former associates. But the conflict he struggled with most in fact stemmed from his diminishing mental fortitude, waging wars against his own self-esteem with a sense of doubt constantly looming over him.

Fearing the Frenchman may not be accepted for who he truly is is as he concealed his extroverted nature, the 29-year-old has frequently failed to express his best version.

But, while he attempted to remove that charismatic and joyful side of his, the footballing facet also took a huge blow. Griezmann, without his extravagant celebrations and exuberant character, is just an ordinary player.

Griezmann is slowly returning to his usual persona. (Photo by Attila KISBENEDEK / AFP)

The Frenchman’s alluring personality is what makes him the footballer he is today, and as he finally appears to be coming out of his shell, his performances have immediately enhanced. It appears that shedding some light on his current situation at the club and clearing the air in front of the public eye has taken some massive weight off his shoulders.

With three goals in three games, there’s simply no stopping Griezmann at the moment. From volleys to back-heel finishes, the World Cup Winner unquestionably seems to have found his best version at the club.

3. Tactful and necessary rotations from Koeman

On top of awarding play time to the endearing youngsters of Barcelona, many veterans in the squad also benefited from a mid-week break. Given the hectic schedule imposed upon by the pandemic, injuries seem to be on the rise like never before. Elite clubs such as Liverpool and Real Madrid have struggled to compete at their usual level, particularly due to the absence of regular starters.

While Champions League encounters have never proven to be the Blaugranas‘ cup of tea, Ronald Koeman has put the club in a comfortable position to rest players with games remaining. Being the only team privileged enough to have won all games in the group stage thus far, the Catalans’ only major concern is the battle for the top spot in Group G as Juventus still prove to be a real force to reckon with. However, scores will soon be settled at the Camp Nou.

Albeit players like Lionel Messi and Philippe Coutinho enjoy savouring every minute on the field, on their day, they can single-handedly shift the tides in the club’s favour. Therefore, preserving them for the league, where the situation is far more alarming should currently be the number 1 motive. There’s no debating the fact that a fully fit Messi is a nightmare for any defender; and considering opportunities to rest will be awfully infrequent from now on, making the most of occasions like these will help the team in the long run.