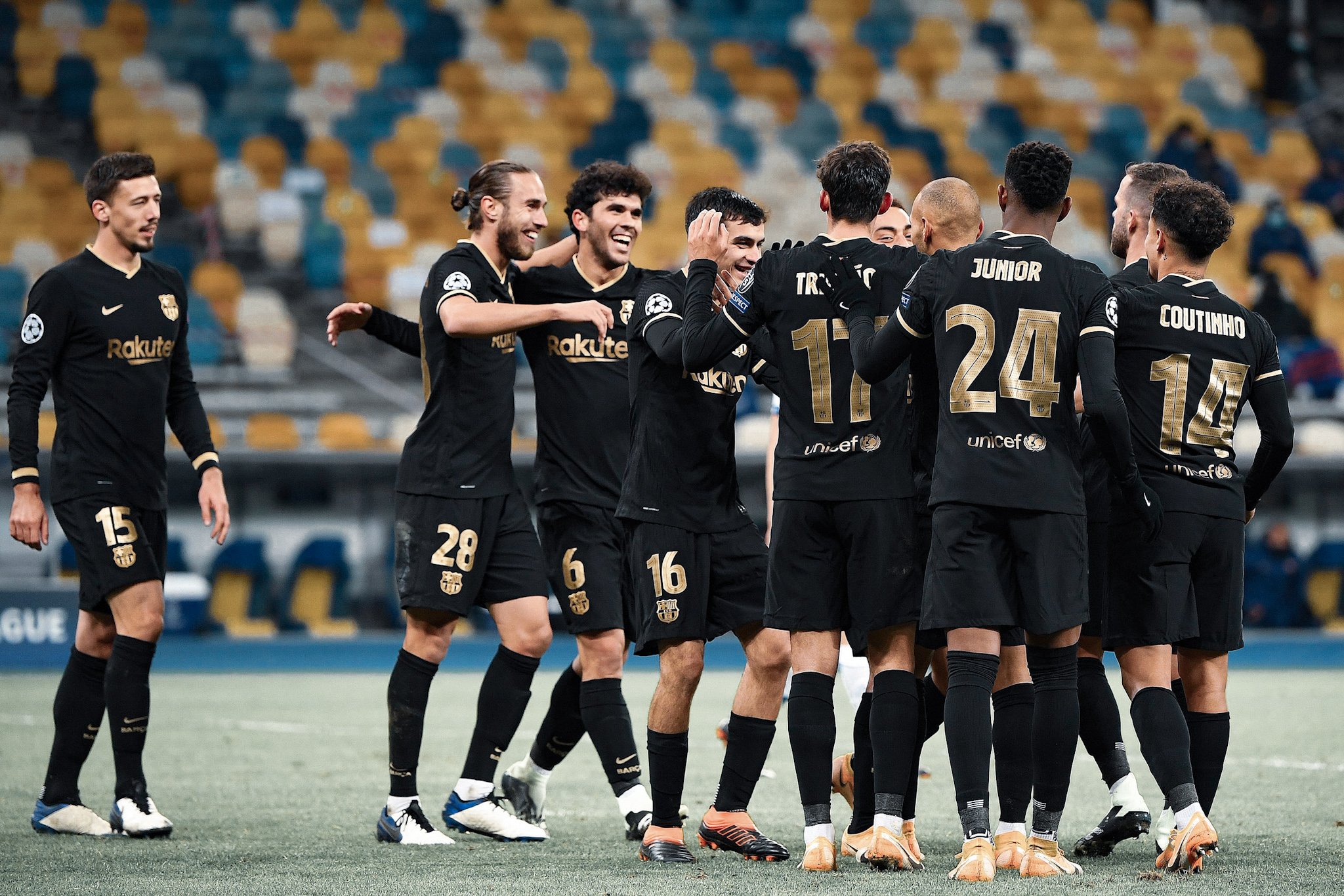 Barcelona managed to throw the loss against Atletico Madrid behind them as they came on top as victors against Dynamo Kyiv. Here are three takeaways from the game.

Completely contradictory to Barcelona’s first 45 minutes, Ronald Koeman’s side were utterly unplayable after proceedings, producing a performance even the veterans would have failed to replicate. A blistering brace from Martin Braithwaite and a goal, each, from Sergino Dest and Antoine Griezmann secured a thumping 4-0 victory for the visitors.

Effective occupation of spaces, fluid sequences in the final third and marauding full-backs providing width with supreme assertion allowed the club to run riot at the NSC Olimpiyskiy: a spectacle one is not blessed with every day.

With the Catalan giants cementing a spot in the Champions League round of 16, the battle with Juventus for the top spot in Group G has been lit up. If the club continue to salvage convincing victories in their next two fixtures, managing to show similar displays against Ferncvaros and Juventus, then Barca’s status as group leaders will undoubtedly continue to prevail.

1. A dream debut for Oscar Mingueza

Throwing shades of a veteran who had played the game for decades, Mingueza embarked on his debut with nerves of steel. The blonde beaming prodigy from La Masia was handed the burdensome responsibility of replacing Gerard Pique. Still, instead of succumbing under the immense pressure, he was foretold, Mingueza rose to the occasion with conviction in his strengths, belief in his abilities and assurance that he was worthy of representing the pristine Blaugrana emblem.

While the Spaniard’s aggressive nature and robust personality were surprising facets on the field, given this was his very first game with the senior squad, he seemed to walk the talk with his composure in possession and positional maturity. Every time Oscar would progress the ball forward, he would be back just in time to aid Lenglet at the back.

? — Koeman: “Mingueza must continue working hard. He has shown that he can be relied upon.”

Committing into tackles with extreme tidiness, the 21-year-old also won a majority of his duels and predicted the opposition’s next move with flawless anticipation, a trait that has invariably helped La Masia center-backs stand a cut above the rest.

Despite Mingueza’s passing looking slightly shaky at the beginning, he gradually grew into the game, showcasing his innate distribution from the back. Eventually, the icing on the cake proved to be the moment Oscar bagged himself a terrific assist from a corner kick as his subtle touch from the near post allowed Braithwaite to extend Barca’s lead.

As options at centre-back continue to deplete, Mingueza could prove to be a vital piece in Koeman’s squad. It could certainly be argued that he is yet to refine his abilities in one-versus-one duels, but for a player that has a whole career ahead of him, improvement in various other sectors of his gameplay are bound to enhance his stature.

After an esteemed performance against Real Madrid in El Clasico, Dest had been an irregular member of Barca’s line-ups. Despite his awe-inspiring exhibition, Ronald Koeman stubbornly refrained from naming him as the club’s primary right-back. However, with Sergi Roberto out due to injury and Koeman gravely lacking options, the former Ajax prodigy was provided with the opportunity to feature in the XI, as he savoured the occasion till the very last minute.

One can comfortably deem the American sensation to be Dynamo Kyiv’s biggest nightmare. Springing up-field with flair and taking on defenders as if they were mere training dummies, Dest was simply brimming in confidence. While his output in the final third was outright unparalleled, particularly for a full-back, never did he seem to leave his defensive duties rejected as his positioning remained unblemished for a majority of the match.

A finish so good, even the opposition look in awe of it. (Photo by Sergei SUPINSKY / AFP)

Along with executing some superbly timed runs, Dest also created a multitude of chances for his partners in crime. Frequently barraging in crosses as he raided down the right flank, the 20-year-old managed to locate players in exceedingly fruitful areas. Besides, he maintained fluid passing sequences amongst the front-line, which in due course paid him dividends as he etched his name on the score-line.

After giving the visitors a much-awaited lead through a beautifully placed finish, his influence continued to enlarge. From savvy dummies to cheeky elasticos, Dest was the embodiment of dripping in sauce. The Catalans have been in dire need of a full-back with such a dynamic profile, a player that can not only flaunt his pace; but also utilize it to the fullest, and it appears that they may have finally struck gold with this distinctive talent.

3. Carles Alena is a gem waiting to be unearthed

Sitting comfy at first place in Barcelona’s respective Champions League group, the Catalans were in pole position to rest key starters and award the reserves with an opportunity to highlight their excellence on the grand stage, where a fair assessment could be made on their talents and capacities.

Unsurprisingly, Carles Alena seized this chance firmly, making the most of his inclusion the line-up as well as prompting Ronald Koeman to appreciate the depth in his squad by a considerable margin.

Starting in a double pivot alongside Miralem Pjanic, the Spaniard had to be more involved defensively at the base of midfield, but despite him excelling most as a number 10, Alena ensured he would make his presence count in midfield.

Alongside displaying some terrific ball retention skills, the Spaniard showed that he has the capability to advance the ball even when found in tight areas or under immense pressure from the opposition. Squirming his way out of compact zones with immense delicacy, he managed to effectively resist all sorts of oppression from the Ukrainian side.

Alena’s body orientation before receiving the ball always enabled him to progress the ball forward and find spaces to exploit in Dynamo’s rigid back-line, hastening the club’s movement in possession in a free-flowing manner. It was due to his unmatched affinity towards playing progressive passes that helped the Azulgranas catch Kyiv off guard on numerous occasions. What was so staggering about his performance was the fact that he completed 106 out of 107 passes, with an accuracy of 99.1%.

As an interior, as a pivot or as a number 10, Carles Alena is a special talent, seeing the game with eagle-eyed awareness and doing his immaculate technical ability justice unfailingly on occasions like these. After being shunned out of the starting XI ever since the pre-season concluded, the 22-year-old made the ideal declaration to not only fans who were beginning to write him off; but also Ronald Koeman, who habitually abstained from looking in his direction.

Could this finally be a turning point in Alena’s underappreciated career?