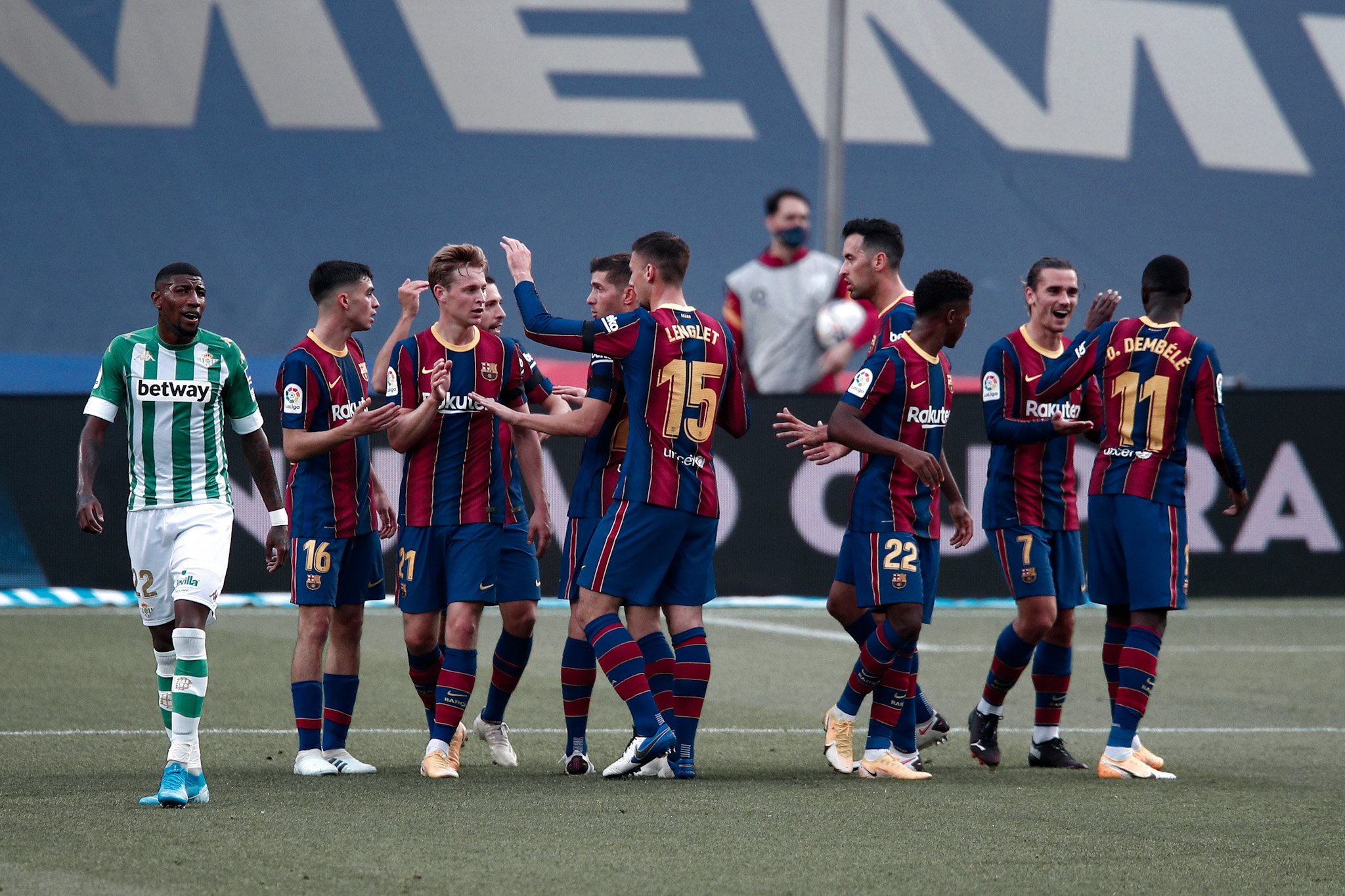 It was a game of two halves when Barcelona hosted Real Betis at the Camp Nou, capping off the game with a 5-2 victory, with goals galore in the second half.

History repeated itself as Barcelona replicated an almost indistinguishable result and performance from the last time the club hosted Real Betis in the league. While the Blaugranas are still a long way off top spot, securing a much needed 3 points with a whopping 5 goals put past Claudio Bravo, signs of progression are finally beginning to appear in the League.

Although defensively Barca are still not up to par and are yet to make full use of their chances in the attacking third, Ronald Koeman’s side are slowly, but surely, heading in the right direction with key players in the squad stepping up at long last. Barça Universal takes a deep dive into the game, picking out three major pointers from Barcelona’s victory.

1. Barcelona’s lion wakes up from his slumber

Eyebrows were raised over Ronald Koeman’s dumbfounding decision to start Lionel Messi on the bench, but with the Argentine talisman only requiring a mere 45 minutes to score a brace and earn himself an assist, Koeman’s caution eventually ended up paying him dividends.

Although Leo had been producing performances at the highest level for a while now: toying with defenders, generating chances and mesmerizing opponents with his supreme set of skills, his only source of goals were astoundingly penalties.

None of his efforts would convert into open play goals, and with continuous doubts regarding the 33-year-old’s commitment towards the club looming over him, the immense baggage of frustration he had been carrying was finally released, in the most timely of moments.

Messi’s impact after coming on was simply unparalleled. Conceding right before half-time, the Catalans were in desperate need of a source of inspiration upfront, an individual who could exploit the acres of space Real Betis had left behind in their leaky defence. And Messi proved to fit just that profile.

In the 49th minute of the game, Jordi Alba sent in one of his typical low crosses, searching for the iconic Messi-Alba cutback which could help his side take the lead, but the 6-time-Ballon-D’or-winner refrained from taking the shot, displaying his innate vision with a savvy dummy that helped Antoine Griezman score from a tap-in.

Afterwards, right when the game had reached the hour mark, Barcelona’s fortunes were blessed with yet another penalty, which Messi decided to take, unsurprisingly converting it with utmost ease and perfection. With a top corner finish, he extended the Azulgranas’ lead even further. Scoring his 7th goal from the spot, Leo showed Griezmann how it’s truly done. At this point, it’s fair to say the South American has finally mastered the art of penalties.

To top it all off, and to finally bring a muzzle on his critics’ mouths, Messi scored his first open play goal of the season, thumping the ball in the roof of the net as Bravo was left stunned by the immense power Leo put into the shot.

Although it’s concerning to see Barcelona rely so heavily on a particular individual, the fact that Messi was so in control of the game and scored a blistering brace to salvage his side the win was also certainly a joy to watch. The king is back, just in time.

The injury-plagued Frenchman is finally beginning to rise from his ashes, as was proven once again with an emphatic exhibition against the Verdiblancos. Ousmane Dembele’s effectiveness in occasions where oppositions tend to employ a high line is still an undeniable asset to the club, especially since his tendency to exploit the tons of space left behind by teams allows him to slip into threatening areas.

Although Dembele is yet to polish several facets of his gameplay, given his crossing is still very rusty and he fails to often make the right judgements with the ball at his feet, his inclusion on the right flank has undoubtedly brought the best out of him, where the former Borussia sensation can efficiently impose himself as a wild card, through his sheer unpredictability and proficient pace.

Despite most La Liga opponents employing low-blocks, restricting Barcelona from operating with ample space at their disposal, Real Betis desired to challenge the Catalans in the possession charts. However, their attacking intent obviously came at a huge cost as Dembele was one of the few players utilizing their defensive fragility.

Eventually, in the 22nd minute, the little mosquito cut inside to his left foot with one of his most recognized, yet hard to anticipate skills: the fake shot. Exploiting the narrow Betis back-line, he smashed the ball into the far post, handing the Blaugranas a 1-0 lead.

While he occasionally lost possession in amateur ways after scoring the first goal of the day, Dembele wasn’t quite done yet. In the 60th minute of the game, Dembele took a shot at an open net. Still, with Aissa Mandi using his arm to deflect the World Cup Winner’s shot, Barcelona secured themselves a second penalty, which of course Messi unfailingly converted.

Dembele is proving to be a huge advantage for the club in high magnitude fixtures, and if injuries refrain from afflicting his path, he could certainly start living up to his astronomical price tag. Consistent gameplay could be the key to success for him this campaign.

3. Antoine Griezmann, a victim of his own timidness

Antoine Griezmann’s woes in front of goal were once again enough to make spectators tear their hair out in frustration. No matter how hard he tried, how valiant his efforts were in possession, the ball just constantly refused to find the back of the net.

Griezmann had arguably his most prominent performance at home soil, linking play with extreme efficiency, orchestrating moves and advancing the ball whenever an opportunity arose. All he seemed to lack was conviction in the final third. Had the Frenchman scored the abundant chances he had at his disposal, this would have unquestionably been a 10/10 exhibition.

The prime example of Griezmann’s lack of confidence was when he stepped up to take a penalty in the first half. With all eyes pierced on the World Cup Winner, and pressure mounting his shoulders, Griezmann choked embarrassingly, hitting a low powered shot which Bravo successfully anticipated.

Griezmann clearly felt the weight of the world on his shoulders yesterday. (Photo via Getty Images)

Sulking off at half-time, one could only feel pity for the former Atletico man, who had given his all on the pitch, but just could not embrace the back of the net.

However, Messi’s intervention at half-time enabled Griezmann to finally earn himself the goal he had been hankering for so long. Although it was a measly tap-in, it certainly came as a consequence of his general accomplishments on the pitch.

In spite of his confidence looking completely shattered, the 29-year-old produced a well-rounded display. The moment Griezmann revives his self-confidence, he is bound to be an influential figure in the final third.

With his general play looking sublime and him not looking as rebuffed as he previously was, all that remains for him is to get back on the scoring sheets, which a player of his innate calibre is bound to do soon enough.