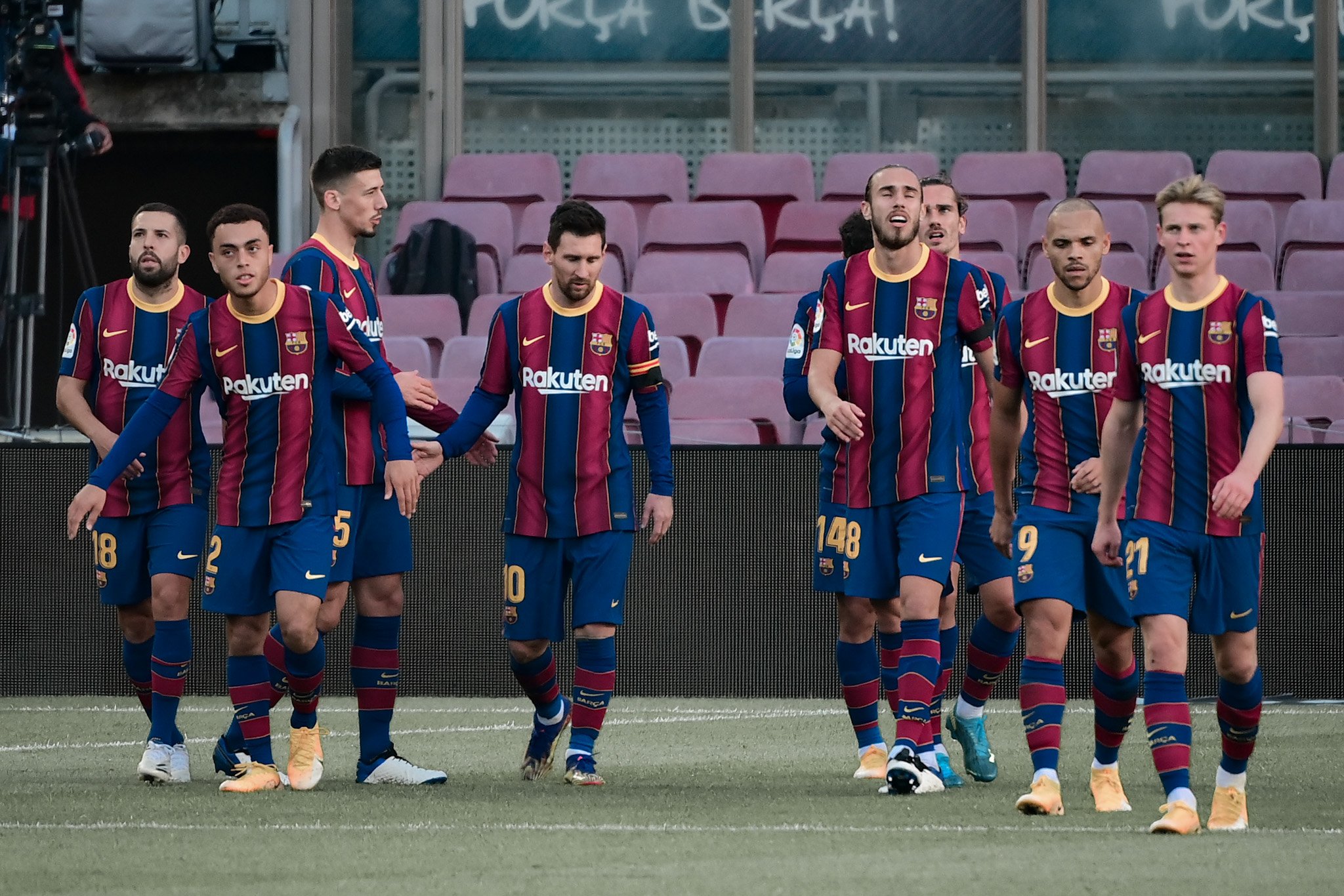 Barcelona returned to winning ways in the league as they humbled Osasuna 4-0 at the Camp Nou, leapfrogging from 14th to 7th in the La Liga table.

Barcelona hosted Osasuna after an impressive display against Dynamo Kyiv midweek. Having rested several players, Ronald Koeman selected arguably the strongest XI available to him for the early kick-off in La Liga against Osasuna. The midweek rest showed as Lionel Messi and Frenkie de Jong, who did not even travel to Ukraine, had excellent performances.

The team looked sharp, and there was a vast improvement in the overall performance compared to previous league games. Most notably, the attack was more fluid and combined better. There was plenty of neat one-touch exchanges between the forwards and better off the ball runs, courtesy of having a natural #9 in the team. The hard work paid off as all four starting forwards got their name on the scoresheet.

In midfield, Pedri partnered de Jong in the double pivot, and they controlled the game in the first half. Óscar Mingueza justified his inclusion again with a solid and composed performance alongside Clément Lenglet. However, the Frenchman went off injured after twisting his ankle in the second period. This leaves the Catalan side with a severe shortage of first-team centre-backs.

The Spanish giants managed to escape with a clean sheet as the visitors pushed for a goal. Marc-André ter Stegen was determined not to conceded and produced a couple of fantastic reflex saves. Barcelona will need him at his best in the upcoming fixtures, especially with such a depleted defence.

For years now the flowing attacking football associated with Barcelona has rarely been seen from the Blaugrana. Under Ernesto Valverde, the Catalan side were static, lacked pace and relied on captain Lionel Messi to produce something special. This continued under Quique Setién last season. For all his love of brave attacking football, Setién struggled to get his team to break down defences and Barça became too passive and reserved.

At the start of this campaign, Ronald Koeman seemed to have rectified this situation. Convincing wins in the opening two matches had Culés excited for the upcoming season. However, this level soon dropped off and, like with Valverde and Setién, Koeman struggled to find his best-attacking line-up.

Lionel Messi and Antoine Griezmann were at the helm of every attack by Barcelona. (Photo by David Ramos/Getty Images)

Against Osasuna, this changed as the home side outclassed their opponents. A rested Lionel Messi ran the show for Barcelona and opened the Los Rojillos defence. He scored a stunning solo goal too, beating several defenders and smashing a shot from outside the box passed the goalkeeper.

One of the other positives came from other players stepping up and deciding the match. Too often, the team has looked to Messi to produce something in every game. Antione Griezmann scored a sensational volley and also allowed Philippe an easy tap in. More performances like these from the Frenchman are needed as Griezmann looks like he is regaining some confidence.

“I’m happy with the team’s display and the goal that I scored today. We want to win the title, and we know very well that it is not easy.”

The chemistry between the front four was also a lot better on Sunday afternoon. They were all happy to interchange and combined well, making it difficult for defenders to close down the spaces. The importance of Martin Braithwaite as a striker should not be understated. He helped to create space, pin back the Osasuna centre-backs and made some brilliant off the ball runs. The Dane also took his goal well after the ball bounce around in the box – exactly what a striker should be there for.

2. Intelligent use of the squad depth from Koeman

For the second successive game, the manager rotated his team and gave some of the fringe players valuable minutes. Some of the rotations have come from injures, especially in defence. But, these changes, such as Óscar Mingueza and Sergiño Dest, who have replaced Gerard Piqué and Sergi Roberto, have proven their level. Even Junior Firpo, who made his season debut midweek and received his first minutes in La Liga on Sunday did not look out of place.

In midfield, Pedri, Sergio Busquets, Carles Aleñá, and Frenkie de Jong all featured in the double pivot at some point in the game. It is promising to see Aleñá featuring in back to back games for the first time in a while. He may have done enough to win Koeman’s trust, and the Dutchman should now have realised his quality and importance to the team.

Busquets returned to action for the first time in a month. (Photo by David Ramos/Getty Images)

The front four have also been rotated and in the last two games, Barcelona have scored eight goals. Lionel Messi returned from rest and was at his brilliant best again. Martin Braithwaite won a place in the starting eleven after impressing in Ukraine and has scored in both games. Ousmane Dembélé and Francisco Trincão were sharp coming from the bench after being given more game time in recent weeks.

Rotating players is vital for any team that wants to win trophies. In these extremely long and intense seasons, filled with international breaks, midweek cup ties, league games every weekend and the UEFA Champions League, players cannot be expected to play every game and maintain their best levels. Having that squad depth and competition for places is essential as it stops players from getting fatigued and motivates them to earn their starting position every week.

Lionel Messi with a heart-felt tribute to the late Diego Maradona. (Photo by David Ramos/Getty Images)

The world of football lost one of its most iconic characters this week – Diego Armando Maradona. The Argentine is routinely considered as one of the greatest ever to play the beautiful game. Maradona was an incredible footballer and is known for his achievements with Napoli and the Argentine national team, in particular.

An often misunderstood and troubled character, the former Barcelona player was at his happiest on the pitch. Off the field, it seems the number 10 struggled with fame. He was hounded by the press and the fanatical supporters constantly, which all got too much for the genius. As Maradona tried to leave this overwhelming environment in Naples, he was held hostage at the club. This clearly affected him as his issues off the field began to escalate.

In the Diego Maradona documentary, his former trainer states that he saw two sides to the player. He explains there was Diego and there was Maradona. Diego was the kind, caring one that wanted to buy a house for his parents to live in. Maradona was the invincible act he took on that never showed any weakness.

When his trainer said this to the Argentine, he replied stating that he knew this, but without Maradona, he would still be living in the shantytown in Villa Fiorito where he grew up.

Maradona had a lot of respect for Lionel Messi, and the two were relatively close. They were often compared due to their style of play and their smaller stature. In tribute to his compatriot passing away, Lionel Messi celebrated his goal by revealing a Newell’s old boys top underneath his Barça shirt. It was a heartfelt gesture to his former mentor and friend.