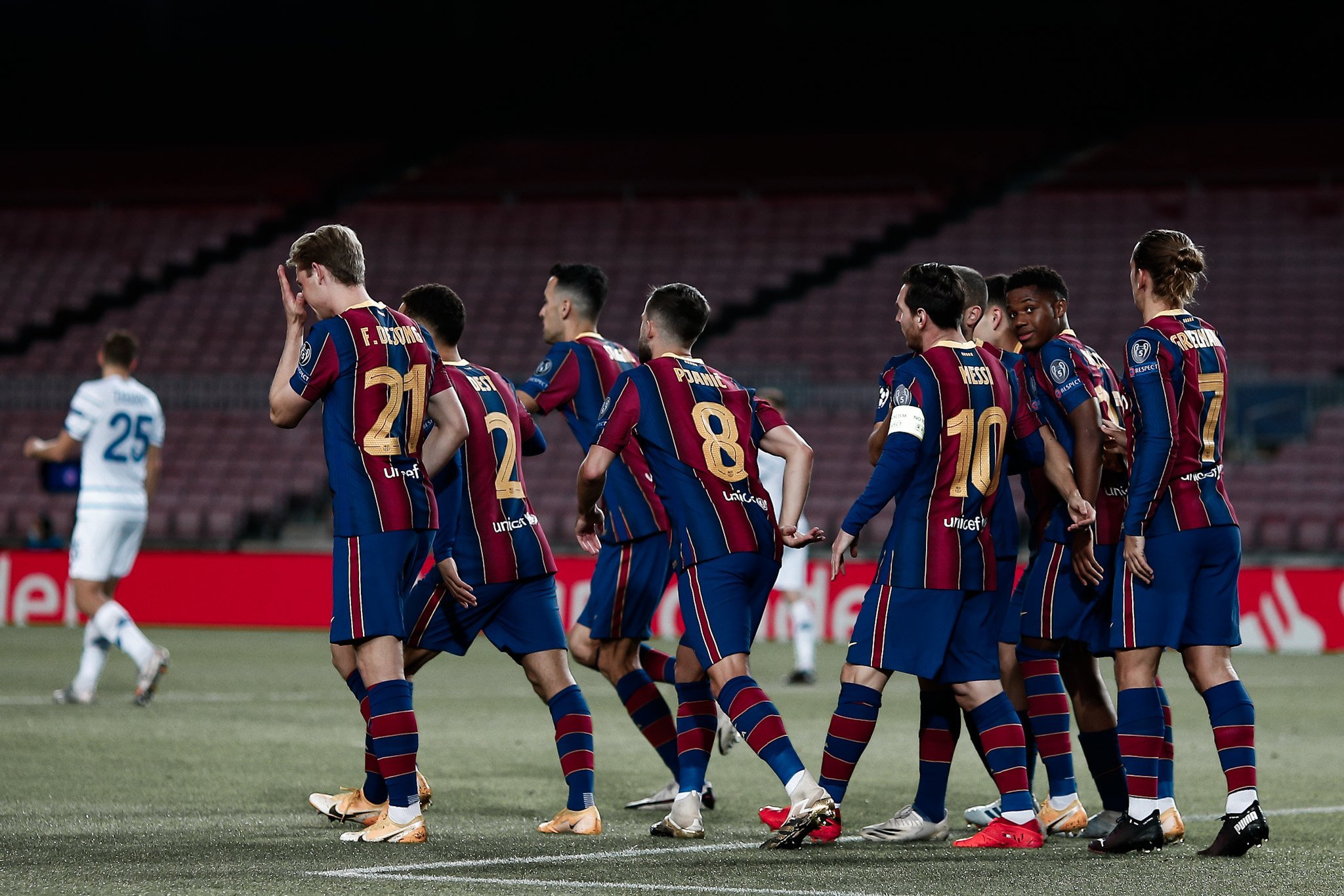 Barcelona hosted a depleted Dynamo Kyiv team who had seen their squad suffer from injuries and a COVID-19 outbreak. However, the away side played admirably and caused the Spanish giants a lot more problems than most people expected.

An empty Camp Nou hosted Dynamos Kyiv, yet another fixture without any fans. It is strange to see Europe’s largest stadium lacking such an atmosphere. Usually, it towers above the pitch, packed with excited Culés willing their team on to produce entertaining football. The iconic stadium has become accustomed to seeing spectacular football and many memorable moments of magic. However, it was almost lifeless as only the occasional shouts from the bench could be heard.

The same can be said about the team as well. Yes, there were some decent moments, but overall the team was lethargic. At times, Barça were too static and sat off the fearless Ukrainian side, who continuously took the game to the Catalans. It was by no means the worst performance the Camp Nou has witnessed over the last couple of seasons, but neither was it a memorable one.

Barcelona started the game with enthusiasm and created several clear chances in the first 20 minutes. After this, the performance levels started to drop, and Dynamo Kyiv grew into the match. Though the Blaugrana managed to take all three points, they will need to drastically improve if they wish to go deep into the competition.

Penalties have been Messi’s friend this season, as opposed to the last few campaigns. )Photo by Eric Alonso/Getty Images)

It has been a difficult start to the season for Lionel Messi. After a turbulent summer, he was forced to stay at his beloved team by an authoritarian president. Messi has clearly not been happy at the club for a while now as the sporting project has been unconvincing.

The Argentine has played every minute of competitive football under new manager Ronald Koeman – nine games in total. He has still produced some match-winning performances but seems to be missing that spark that always separated him from the rest.

Barcelona’s captain still dictates most of the team’s plays and his dribbling and vision has certainly not deserted him. The slight cause for concern is that his usual goal-scoring touch has dried up for now.

In the six games in La Liga, and three in the UEFA Champions League, the forward is yet to score from open play. He still has four goals this season but they have all come from the penalty spot. The 33-year-old has been getting chances to score, but has been unable to take them. It has been a recurring theme throughout the squad as others could be criticised for missing big chances.

“We started the game well, but we did not take advantage of the chances we had.”

Whatever the case may be, it is unlikely that this open play goal drought will continue for much longer. However, this does highlight how dependent the squad still are on Messi’s goals, as their 12th place position in the league suggests.

2. Ter-Stegen is back to save the defence

Firstly, the elephant in the room should be addressed here. This was Marc-André ter Stegen’s first game back since the humiliating 8-2 defeat to Bayern Munich in the UEFA Champions League. Being a goalkeeper is often a thankless job. One mistake and it can cost a team the game.

Many top-class keepers have struggled with their form and seen their confidence levels drop. Prime examples of this are Kepa Arrizabalaga, David de Gea, Thibaut Courtois, and even the great Manuel Neuer.

Therefore, Ronald Koeman probably thought he could ease the German goalkeeper back into the starting line-up against a weakened Dynamo Kyiv side. This assumption proved to be wrong as the shot-stopper rescued his team on several occasions with important saves.

Ter Stegen showed how mentally strong he is by stepping up when his team needed him on the night. The Barcelona goalkeeper pulled off some fantastic 1v1 saves during the match. It is not the first time he has earned his team points in recent seasons with his shot-stopping abilities. This does highlight the defensive frailties of the team as the Catalan side were cut open far too easily.

While the German goalkeeper’s replacement, Neto, filled in well for the injured 28-year-old, Culés will be delighted to see ter Stegen return to the starting 11.

3. Should Pjanić and Dembélé be starters?

Miralem Pjanić put in another impressive display in the UEFA Champions League for Barcelona. The Bosnian was one of the best players against his former side Juventus in Barça’s last fixture in this tournament.

He then mirrored that with a solid outing against Kyiv, keeping the tempo of the game flowing. Pjanić played progressive passes, breaking opponents lines of defence and was always quick to release passes, keeping the speed of the game alive.

The number 8 has certainly made a positive impact since signing. He has injected the midfield with quicker passing and is heavily involved in the build-up play. There are some areas where he could improve, and his fitness needs to be worked on, but he has the makings of a successful first-team Barça player.

Another impressive cameo for Dembele — needs to find consistent ground in the team now. (Photo by Eric Alonso/Getty Images)

Similarly, Ousmane Dembélé was introduced and changed the game. As the home side were struggling to find the rhythm, the Frenchman gave some much-needed energy to a tired-looking Barcelona side.

The World Cup has the ability to open the game up with just a few touches and looked determined to show Ronald Koeman why he should be starting more often. He was unlucky not to score as he had a thunderbolt of a shot saved by an incredible keeper on the night.

The 24-year-old must continue to put in consistent performances and stay focused. It normally takes Dembélé a good run in the team to get to his very best level, but he is starting to regain his form. He could be key in helping the Spanish giants salvage what looks to be another disappointing campaign.