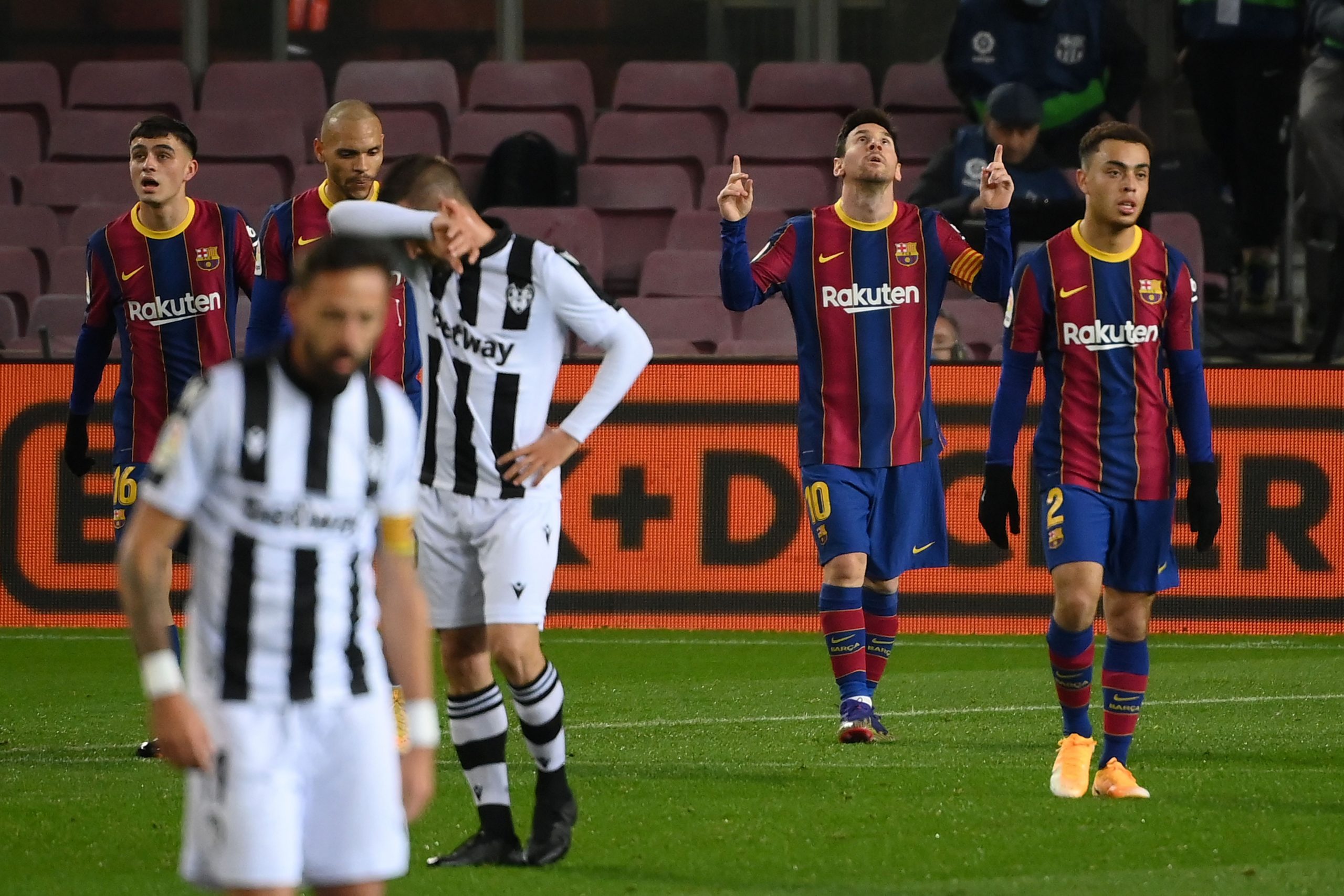 Ronald Koeman decided to select an almost identical team that lost to Cadiz the previous week. The only change was at centre back as Ronald Araújo replaced Óscar Mingueza. Though Barcelona were eventual winners, the performance was far from a vintage Barça display. Many of the same problems still persist, and the home side lacked a clinical edge in front of goal.

There was a lack of width from the Catalans, and the centre of the pitch was too congested. When Sergiño Dest and Jordi Alba did get forward, the Blaugrana had success down the wings as Levante defended narrow and allowed space out wide.

The real moments of magic came from Lionel Messi as other big names struggled to make an impact. He was involved in 15 shots out of Barcelona’s 24 attempts on goal. Messi was the main attacking presence and had a tough battle against Levante goalkeeper, Aitor Fernandez. Barça’s captain would eventually win the duel, scoring in the 76th minute to give his side a 1-0 win on the night. It seemed as though the only way Barcelona were going to win was if the Argentine scored.

When manager Ronald Koeman began his coaching career at Barcelona, there was hope that he would bring back the best version of the team. He had the respect and authority that the previous two managers did not. The squad was also rejuvenated with some of the senior players departing and several younger signings being made. Furthermore, the initial signs were positive as the team played with much better intensity and fluid attacking football returned.

To an extent, Koeman has the Blaugrana playing better football, but the results have been questionable, to say the least. This partly comes down to the players as individual errors and performances have cost the side. However, Koeman’s stubbornness is also an issue as he seems unwilling to change his ideas or line-ups.

The talents of Riqui Puig and Carles Aleñá have been overlooked this season, though playing well when they have featured. Besides, Miralem Pjanić is unhappy with his limited game time so far. Ignoring some players means that Koeman is overusing others while they have not been performing at their best.

The Dutch manager also continues to play too many central players in the attack. It means players are fighting over the same spaces in the middle of the pitch, and the wide areas become ineffective. Though Koeman changed the formation against Levante, possibly due to a lack of available wingers, Philippe Coutinho and Antoine Griezmann still found themselves on the wings too often.

2. If Messi does not score, Barcelona do not win

This campaign, Barcelona are relying on Lionel Messi more than ever. The Argentine has not been at his blistering best, and his usual scoring statistics have been lower for his monumental standards. It is evident with the Catalan’s poor form in La Liga. If Barça’s number 10 does not have his say on the match, nobody else seems to want to either. In fact, the Blaugrana have only won one game in La Liga where the 33-year-old has not scored in this season. This came in matchday two against Celta Vigo.

In difficult games, the team still looks to their captain too much to rescue them. Opposition keepers have put in some impressive displays against the Spanish giants this season, but this cannot be used as an excuse.

In the match against Levante, Barcelona had more than enough chances to win comfortably. Once again though, it fell to Messi to decide the fixture and give Barça the three points. Too many players still hide on big occasions and fail to take their chances. The squad has proved they can do it against teams like Ferencváros and dynamo Kyiv, but they need to produce these types of displays more regularly.

As the manager changed the formation for the first time this season, Frenkie de Jong found himself in a more advanced position. The double-pivot partnership of Sergio Busquets and de Jong has been a disappointment so far. Neither player has been anywhere near their best, and they seem incompatible. Culés have noticed this, and for the first time, the Dutchman was being questioned by fans about his mediocre performances.

In his more advanced role, the former Ajax midfielder seemed to enjoy the freedom he was given. He was much more adventurous in his running and passing. The 23-year-old controlled the play for Barcelona and linked a lot better with the forwards.

In the match against Levante, de Jong created five chances, the same amount he had created in his previous ten games. Ronald Koeman wanted to get the number 21 to link more with Lionel Messi in particular. This new role could be the key to achieving this and getting the best out of the talented midfielder. De Jong needs a consistent run of form to prove any doubters wrong and show why he deserves to be in the team every week.