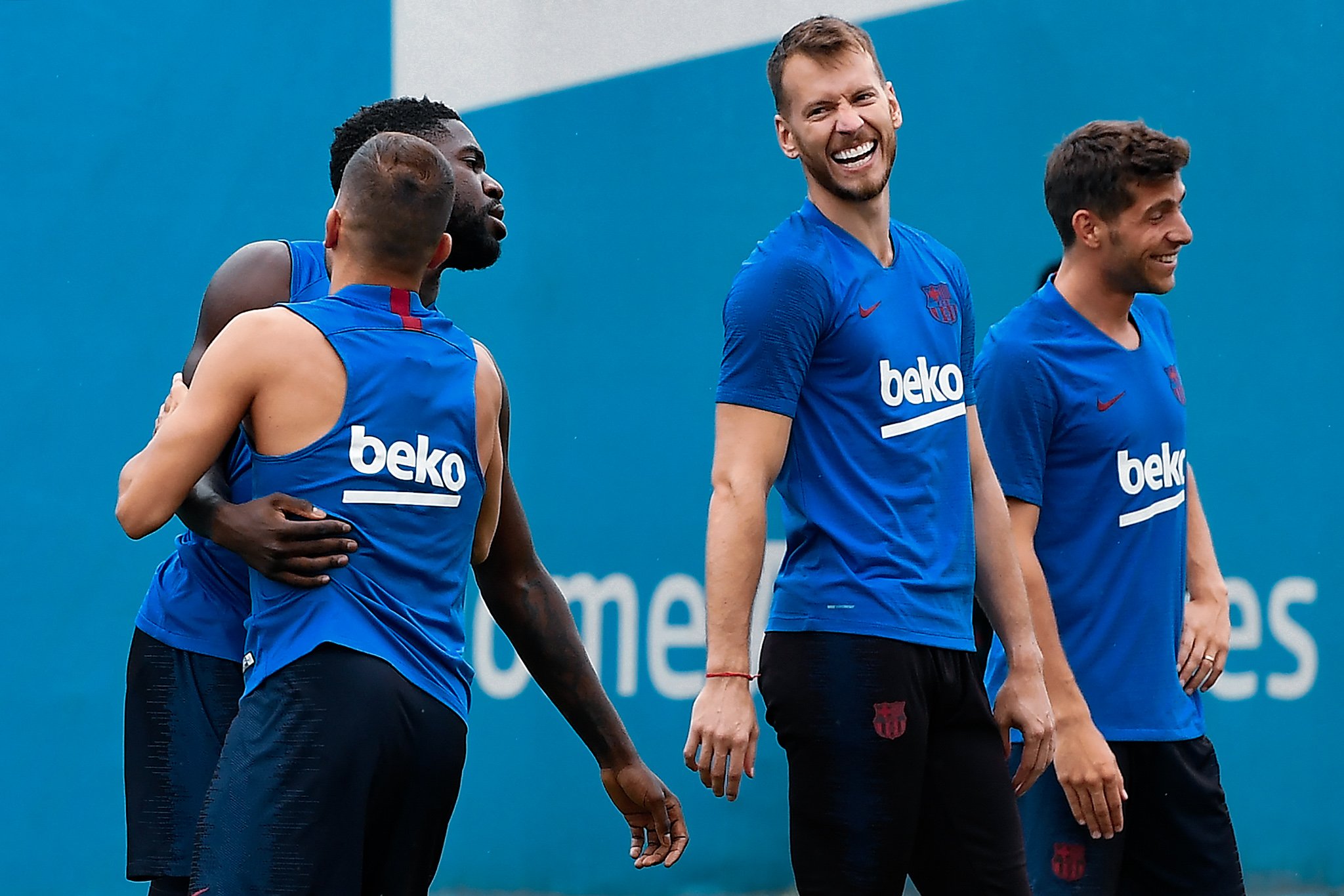 Barça Universal takes a look at three players Barcelona must offload in the winter transfer window in an attempt to make space for other signings.

Life under Ronald Koeman looks far from perfect at this point. He is still adamant on using his 4-2-3-1, which works sometimes, and not in other situations; the inclusion of Pedri and Ansu Fati has been encouraging, but he sends a completely different message with Riqui Puig and Carles Aleña.

Some of the problems at the club can be boiled down to tactical rigidity, while others are simply a case of a lack of personnel. For eg: Barcelona have four centre-backs, of which only two are currently fit. Moreover, the lack of a natural striker is visible, especially in games like Deportivo Alaves or Getafe, where the likes of Lionel Messi and Antoine Griezmann can only do so much.

The good news is, the Blaugranas have long identified the players they want to bring in to bolster these positions: Olympique Lyonnais’ Memphis Depay and Manchester City’s Eric Garcia.

Memphis Depay and Eric Garcia have been on Barcelona’s wishlist for a while now. (Photo via Getty and Imago respectively)

Well, truth be told, neither of them is tailor-made for the club, not even Garcia who spent a majority of his life at La Masia. There are tactical twitches that Koeman may be forced to implement, and some difficult decisions he may have to take, in terms of who starts and who sits on the bench.

In both a propitious and ill-fated sense of nature, those might not be the biggest problems for Barcelona with the two players. The most magnanimous intricacy, in fact, is the financial situation at the club — what a shocker.

Barcelona must offload players in order to afford the duo — both of whom are expected to cost in the range of €10-15 million each. While reports of Ousmane Dembele leaving have hit the mud, Barça Universal suggests three players that the club should offload to pave the way for Garcia and Depay – and hopefully others.

At this point, talking about Samuel Umtiti seems like banging your head on the wall. Where to start, and where to end?

The French centre-back started life in fairy-tale fashion at Barça and quickly took over Javier Mascherano’s spot in the team. In fact, over the next two seasons, his growth was meteoric, ending the 2017/18 season as one of the best in the world in his position.

During the course of the season, though, Umtiti suffered a knee injury against Celta Vigo, which ruled him for several weeks. An operation would help him recover completely, but it would also hamper his chances of playing in the World Cup that summer. In hindsight, his decision to not get operated turned to be fruitful, as he lifted the World Cup with France.

Umtiti’s personal ambitions to win the World Cup paid off, limping his club career in the process. (Photo via Imago)

That knee, however, would go on to become the root of all of Umtiti’s troubles. Not only did he lose his place in the team to Clement Lenglet, his performances – the few of them, anyway – caused fans to lose faith in him.

Sure, he is making a recovery now, but is barely recognised by Ronald Koeman as part of the squad, and is below Ronald Araujo in the pecking order. The Frenchman wants to stay at Barça and fight for his place, but when and if Eric Garcia arrives, any hopes of him staying a fourth-choice will vanish, as well.

On ability alone, Umtiti is worth no less than €50 million. However, pertaining to his injury record, the club might have to accept a measly amount for him, and even that is generous. If push comes to shove, do not be surprised if the club terminates his contract to open room in the wage-bill.

Nobody, included Martin Braithwaite probably expected him to come to Barcelona and become a starter over the likes of Antoine Griezmann, Lionel Messi, or even Ousmane Dembele. He arrived as an emergency signing and has been used as a souvenir of the same.

His problems multiplied this season when Fransisco Trincao was signed and Ansu Fati was given a first-team number. The Dane has made no more than four appearances this season, clocking in a grand total of 44 minutes. In his less than 45 minutes of game time, Braithwaite has touched the ball a mere four times in total, which is less than ideal to say the very least.

There is only so much that can be said in defence of Martin Braithwaite. (Photo via Imago)

He might be given an extended run in the team following Fati’s injury, but Koeman clearly prefers having Memphis Depay among his ranks, and his ideas have been bolstered now more than ever. Moreover, reports suggest that the Dutchman is looking to give Konrad de la Fuente his breakout start in light of the injury.

Braithwaite is still 29, in peak fitness, and can quite comfortably contend for a spot for more mid-table clubs across the top four leagues, while fetching an easy €10-15 million for the club. His exit alone, in fact, can sponsor Depay’s transfer.

Woah there. One mistake and the fanbase is ready to ship him? Well, of course not. Neto is a fantastic goalkeeper who made for a more-than-able deputy while Marc-Andre Ter Stegen was injured. His errors against Real Madrid and Deportivo Alaves, while costly, do not mean an awful lot for him in the grand scheme of things.

That said, however, like Jasper Cillessen, Neto is good enough to warrant a starting spot at many clubs across Europe. Not only is he a brilliant shot-stopper, but the Brazilian is an able passer. He averaged a passing accuracy of 86% in his six starts in the league.

At his best, the former Valencia shot-stopper made six saves against Madrid, including a sensational double save to consecutive Toni Kroos attempts. That performance has been one of the best Spain has seen this season.

Neto is fantastic; but could be sacrificed to road more transfers. (Photo via Imago)

While he has been great, his departure will not be significant enough to leave a gaping void. Inaki Peña and even Aranau Tenas – two La Masia stars are ready to take the wheel as backups, filling in for Ter Stegen in cup games, or when he is injured.

At 31, Neto probably has four more seasons left under his belt before he can call his time with the sport. His age and experience with top clubs like Barcelona, Juventus, and Valencia should help him leave for a respectful €8-10 million.