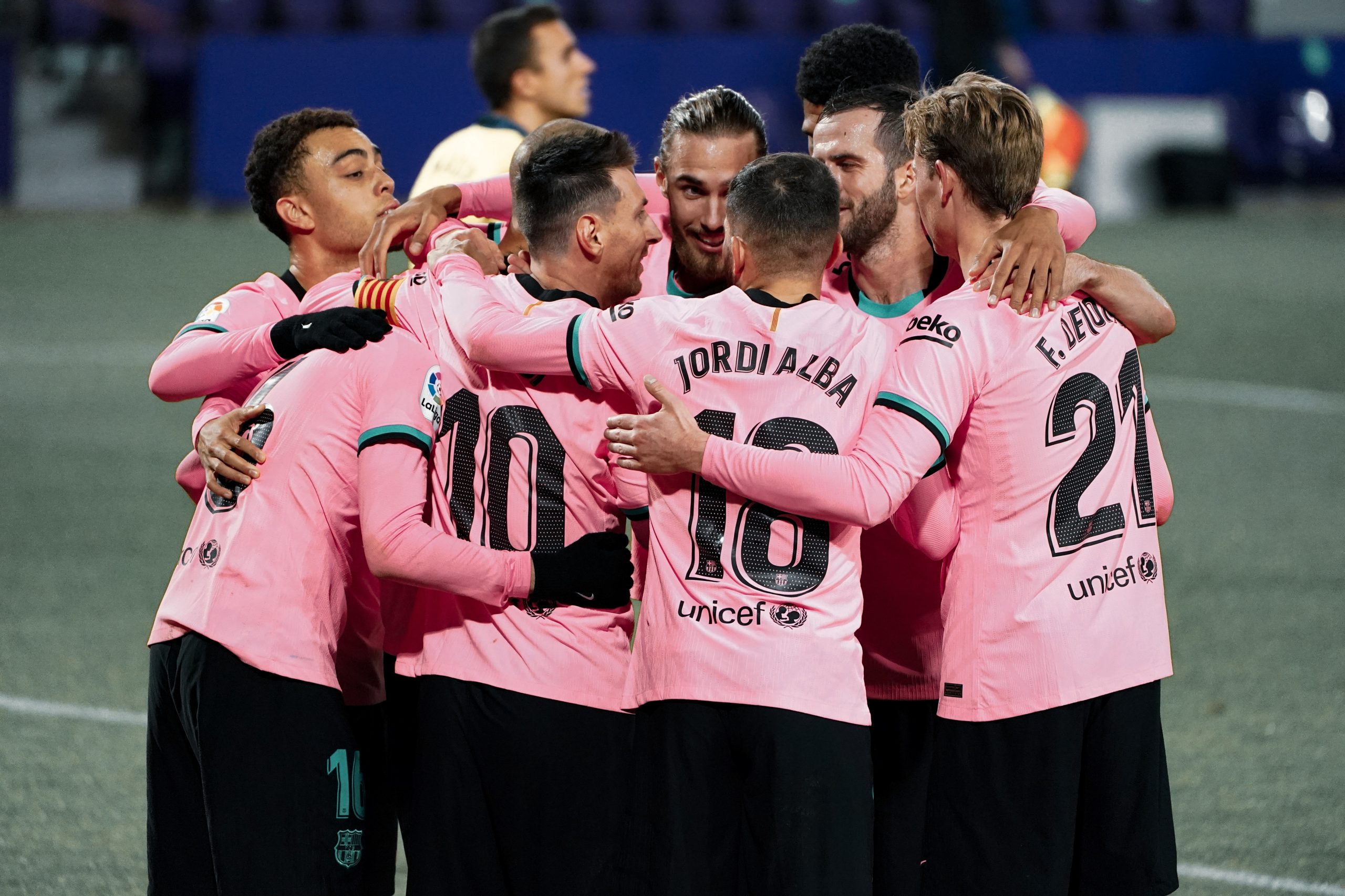 Excellent anticipation of the game and an effective formation put into practice managed to bear Ronald Koeman’s side fruit massively. Barcelona, making up for their disappointing draw against Valencia, pummeled Real Valladolid at the José Zorrilla as Messi, Braithwaite and Lenglet etched their name on the score-sheet.

In spite of slightly demoting on the back foot after proceedings, as a more conservative approach was seen in action, Barcelona were in control of the game for large portions of the encounter and utilization of the wider areas of the field enabled the visitors to trouble the hosts’ compact back-line frequently.

1. Sergiño Dest is back to his brilliant best

Raiding up-field like a man on a mission, no longer do Culés have to bear witness to their right-back looking completely clueless in the final third. Gone are the days Nelson Semedo or Sergi Roberto would waste fruitful opportunities with their inefficiency in the opposition half as there’s a new star in town, who pounces on chances with extreme proficiency and barrages in crosses like a cannon. Sergiño Dest – after a few subpar displays – came in clutch to retrieve his side a 3-0 victory.

The American sensation is proving to be worth every penny so far and was a menace on the right flank against Real Valladolid. Gifted with natural full-back abilities, Dest combines his unmatched talent with wonderful awareness of the game. Instead of simply running up and down like a headless chicken, every move he makes is meaningful to Barcelona’s plays. Ronald Koeman appeared to have employed a back 3, which enabled the former Ajax prodigy to operate as a wing-back.

While Sergiño’s defensive diligence is an underrated facet of his gameplay, not being burdened with excessive responsible allowed him to burst at Nacho Martinez, who had a troublesome night containing the speed demon. Dest was cunning in possession and took players on confidently, searching for low driven cut-backs and attempting to locate players in the box frequently.

By the end of the 90 minutes, Dest accumulated a grand total of 5 key passes, which were the most by any player, and the same as the entire Valladolid team. Braithwaite’s poacher instinct helped the 20-year-old pick up an assist as he blasted the ball into the back of the net. Dest is a player who justifies the shirt he puts on, and more than meets the eye.

From fielding four number 10s on the field to hampering the team’s structure with questionable substitutions, it’s fair to claim Ronald Koeman has frequently failed to play his cards right. However, as detrimental as his errors may have proven to be over the course of the campaign, Koeman, at the very least, made amends when necessary.

After a disappointing 2-2 draw to Valencia, an interesting change in set-up was seen. Instead of entailing his usual 4-2-3-1 set-up, the former Barça defender adopted an unconventional 3-5-2 system, placing a 3 man back-line. This paid off massively, mainly due to the fact that Alba and Dest were now substantially involved in the attack and were stripped off their defensive duties in the first half. The wing-back pairing injected much-needed width on the field, stretching Valladolid’s compact back-line and allowing Messi and Pedri to wreak havoc at the edge of the opposition box.

An enthralling performance against relegation fodder should by no means be perceived as a bolt from the blue, but Koeman let go of his stubbornness, approaching the game with a style that utilized Valladolid’s weaknesses. Whether a similar formation is seen again soon is certainly unknown, but it highlighted that Koeman is pliable enough to make adjustments when required.

3. Lionel Messi and Pedri: A deadly duo in the making

While it’s certainly early days, Pedri seems to be filling a void in Messi that makes him whole again. Great players come and go, in fact, attempts of signing great players spiked drastically ever since Neymar departed the club, but to Barcelona’s dismay, record money signings – Griezmann and Coutinho – are still struggling to find their feet with Messi. So much money splashed, investments made, and in the end, they failed to yield significant results.

However, ironically, the player that seemingly came with the lowest expectations, with a loan move even on the offing has stolen the show like none other: Pedri Gonzalez has elevated Barcelona’s midfield as if he has been doing this for years. Despite never having the privilege to learn his craft at the lavish luxuries of La Masia, Pedri embodies himself in elegance, aiding players surrounding him with intelligent movement and unparalleled understanding of the game.

Lionel Messi had a menacing display in the final third, as has been the case 644 times in his illustrious career. Even so, it’s been ages since the Argentine talisman looked relieved of his duties and seemed to be enjoying his football again. With Messi and Pedri combining ever so flawlessly as they read each other’s next move with a slight inkling of their expression, Messi’s huge smile never seemed to wipe off his face.

The highlight moment for the diminutive virtuous came in the game’s 65th minute, when a perfectly timed back-heel found Leo Messi, allowing him to capitalize in front of goal. Rather than celebrating his record-breaking goal with an individualistic celebration, the captain instantly pointed towards the prodigy, thanking him for constructing the play as the duo embraced with gleeful faces — a start of something special.