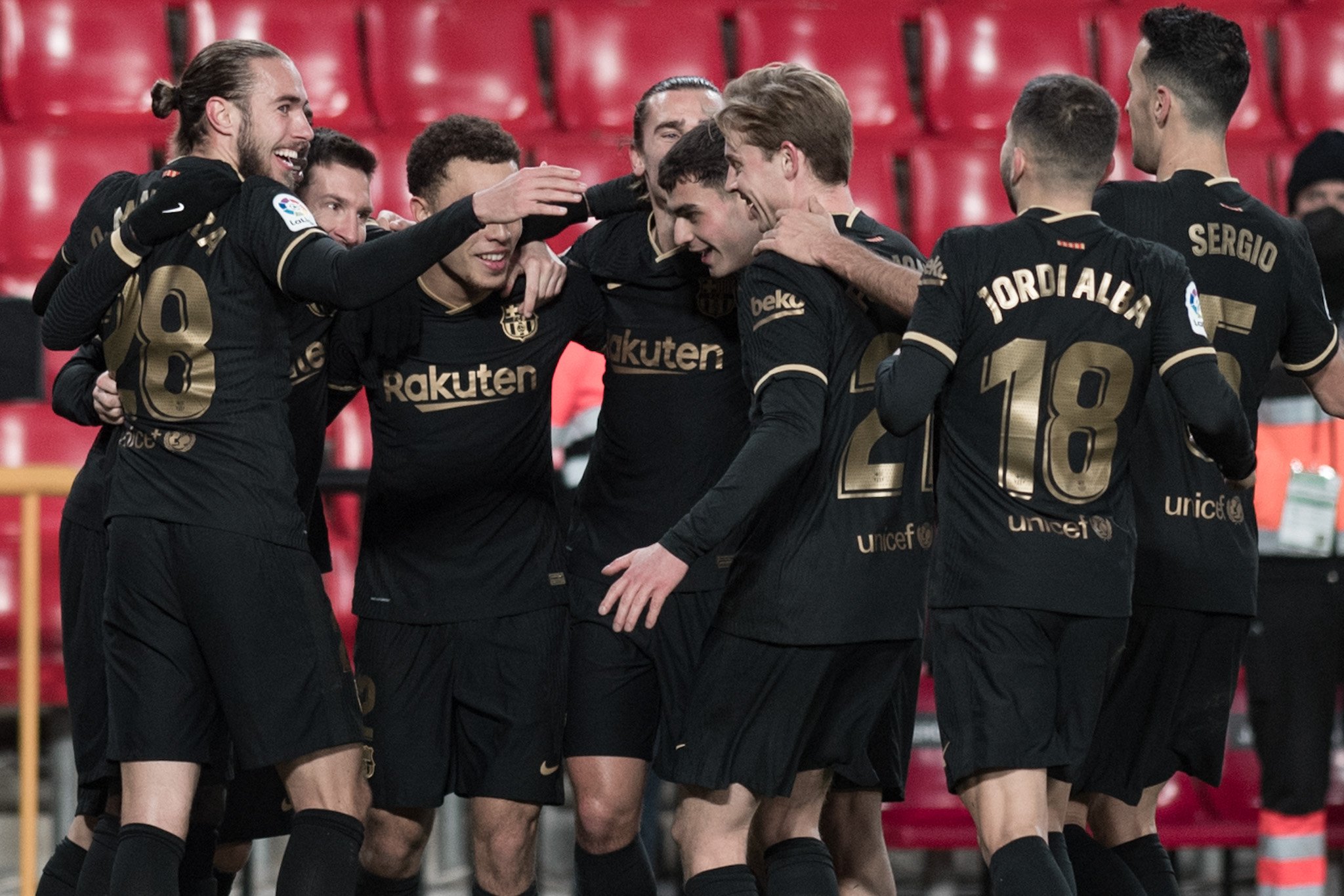 Ronald Koeman has finally found continuity with the 4-3-3 formation as a thumping 4-0 win over Granada enables the Blaugranas to win three games in a row for the first time in La Liga this season. In addition to maintaining a clean sheet, the front-line looked exceptionally fluid and clinical in the final third, making the most of Granada’s errors and utilizing possession to the maximum.

With braces from Griezmann and Messi securing an assertive 4-0 victory, Barcelona now prepare for their upcoming Super Copa clash against Real Sociedad.

1. Tactical and behavioral changes are beginning to bring the best out of Messi

Lionel Messi appears to be enjoying football again; from his body language to his desire to always be involved in plays, it’s fair to say he is a lot more comfortable representing the Blaugrana jersey, the same jersey he once desired to leave behind in an attempt to force an exit out of the club last summer.

However, despite a slow start to the season and questions regarding his commitment to the club continuously looming over him, the Argentine has finally found his rhythm again, with two blistering braces in a row establishing him as the undisputed leader of the Pichichi race.

Of course, the fact that Leo’s body language has improved drastically is certainly a core reason why the number 10 is back to his brilliant best, but deploying him as a false 9 in the traditional 4-3-3 system is also a key element in his recent performances. Against Athletic Bilbao and Granada, Ronald Koeman brought the best out of Leo – incorporating a well rounded 433 system – as Barça had thoroughly dominated, with Messi taking the center stage.

Leo continually dropped off from the defensive line, receiving the ball in deeper areas and finding room to turn and play. Employing Dembélé on the right flank paid the visitors dividends with the Frenchman frequently bombing behind the back-line as he exploited spaces to maximum efficiency. Additionally, Griezmann occupied the left-back and center-back channels efficiently, playing the perfect complementary role along with finding himself in goal scoring positions.

As a consequence of being on the ball more often and the team complementing Leo’s tendency to drop in midfield, Messi would successfully break free from cages surrounding him and situate himself in areas of danger. The pre assist he provided to Pedri’s goal against Bilbao epitomized his newfound role best – sending in a long ball from almost the halfway line, a crucial line-breaking run from De Jong gave the play purpose as he saliently provided Pedri with an open header.

Executing such a complex position bore Leo fruit in both his recent outings, especially with the inclusion of dynamic midfielders who would habitually make runs inside the box. Now that Messi is more influential on the ball and has regained his long lost precision in front of goal due to the recent enhancements in the formation, the little magician is back to tormenting teams.

2. Griezmann galvanized into action against Granada

Antoine Griezmann has adapted wonderfully on the left flank, which is, in truth, unfamiliar territory for the Frenchman. However, in spite of not being in the center of plays or being the focal point of attention, Griezmann’s alternation of roles between Pedri and freedom to roam around in the half-spaces has undoubtedly given him a massive edge.

Against Athletic Bilbao, while the World Cup winner failed to contribute to any goals, he was proficient in possession and accomplished in most of the ‘dirty work’ he was tasked to engage in, making a whopping 8 recoveries. Understanding his role better, coupled with his sudden coherence in front of goal, elevated his worth considerably against a gritty Granada side, despite not being deemed as a classic winger.

Albeit Griezmann’s opener against the Madrid-based club was largely due to Soldado’s error, a neat first touch enabled him to get the better of Rui Silva. Shortly after, the Frenchman carried the ball up-field with comfort as he provided a neat assist for Messi’s goal. To cap off a compelling performance, Griezmann then scored a magnificent half volley, cementing a 4-0 victory for the visitors.

Taking a look at Griezmann’s recent spike in performances and efficiency in the final third, it’s safe to say he can play a commanding role in the absence of Ansu Fati, doing his innate understanding of the game justice with silent, yet influential roles. A brace and an assist at a venue where Barça have previously not found much luck is testament to the fact that Griezmann is still far from being labelled a flop.

For the first time in La Liga this season, Barcelona have managed to win 3 consecutive games in a row – a statistic that should not be perceived as a major achievement given the immensely high standards the Catalans have set, but it does slightly give hope for the future considering how dysfunctional and inconsistent the team has looked over the course of the campaign.

One of the key factors that have led to this rise in consistency has been reverting to the orthodox 4-3-3 set-up. Ever since the Dutchman has arrived at the club, he has failed to find the ideal formation, habitually tinkering with the system in search for short term success. But, while Ronald Koeman has attempted to come up with various solutions, in the end, the system he strayed away from most yielded him the most significant results.

Finding continuity with the 4-3-3 has enabled the club to find the perfect balance between freedom and organization. The players know their roles better, the defense is well guarded and the front-line possesses a great deal of authority, particularly since Messi has finally found a role that caters to his needs.

Although experimentation is always appreciated and has worked out on a few occasions, it is vital to have a go-to formation that is feasible enough to carry in the long term. One of Ronald Koeman’s major concerns with the 4-3-3 was the inability to incorporate the likes of Frenkie de Jong and Griezmann, but in actuality, the 4-3-3 has managed to bring the best out of the duo.