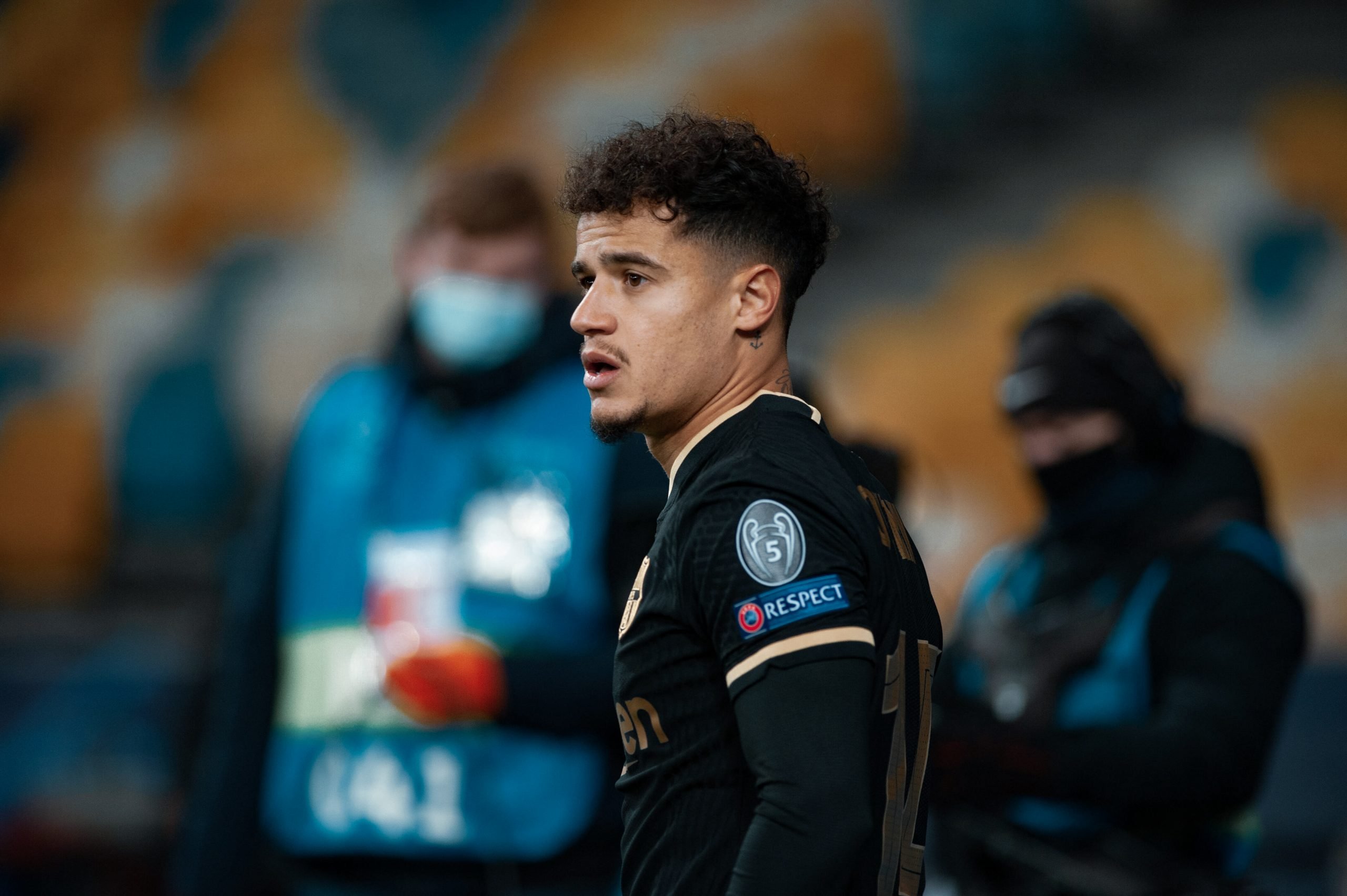 It was only a little over three years ago that Philippe Coutinho was rocking the Premier League, eyeing a dream move to Barcelona. After Barcelona broke their bank for a record-breaking €150 million move in the January window of the 2018-19 season, Barcelona fans worldwide hoped that the Selecao creative midfielder would be their long term replacement for club legend Andres Iniesta.

It is fair to say that the Brazilian has not been able to shoulder these heavy expectations. Bar the sharp start he had after joining, he has hardly looked effective in the Garnet and Blue. Midway through his Barcelona term was a loan move to Bayern Munich, during which he ended up scoring twice against his parent club in an infamous Champions League loss that all Cúles would love to forget.

In spite of this, the Bavarians were uninterested in the Brazilian since, by the end of his term at the German club, he was a backup choice anyway — Bayern gaffer Hansi Flick preferred veteran Thomas Muller in the role behind Lewandowski — and for a backup choice, the price being demanded by Barcelona for Philippe Coutinho was simply impractical and untenable.

It was when new manager Ronald Koeman arrived that the former Inter Milan man might have had a ray of hope. After all, the Dutch manager preferred a 4-2-3-1, in which Coutinho could play in his preferred ‘10’ role, behind the striker. Reprising this role, he looked like his old self once more.

In the friendlies played by Barcelona, Coutinho managed to score twice in three games, following which the Brazilian got his chance in La Liga as well. He continued to be impressive here as well, managing to score once and assist twice in his first three games in La Liga. Furthermore, he scored in the first start he got in the Champions League as well.

After these games, he picked up an injury post the El Clasico, post which he never performed the same way. He scored just once in the ten games he played post his injury. Youngster Pedri looks a much more solid, reliable and consistent option now, showing maturity and an effective ability to link up with Lionel Messi – something Coutinho has hardly been able to mirror. It is safe to say with the new formation change, Pedri’s emergence, and new president Joan Laporta’s intention to make large scale changes, the Brazilian’s time looks to be over with the Spanish side. It is with this thought in mind that we look towards three clubs that could potentially utilise the dynamic Brazilian’s services.

Arsenal set up in a 4-2-3-1 under Arteta, with Martin Ødegaard currently providing the creative spark — but word on the street is Real Madrid might just look to rely on the Norwegian wonderkid once more come the 2021/22 season.

If that’s the case, Arsenal could definitely do with a creative presence like Coutinho behind their scoring threats Pierre-Emerick Aubameyang and Alexandre Lacazette. If the Gunners do move for Coutinho, they would fully know that they are going for a player who has proven his capability in the Premier League before.

The Brazilian doesn’t just provide a creative threat, but a long-range scoring threat and a set-piece threat as well — something that the London based club currently lacks, barring Granit Xhaka, who is rather inconsistent and can’t seem to hold his place for long. Coutinho also brings forth a dribbling and ball carrying ability that Arsenal currently only have with Thomas Partey.

While youngster Emil Smith-Rowe has shown promising signs, it is definitely too soon for Arsenal to rely upon him as the first choice option as games like their recent defeat against Olympiakos have shown.

For the Barcelona player, it would be a chance to prove his worth once more with a side that looks to be in tatters. He could be the spark that pushes Arsenal towards the Champions League spots once more. With Mesut Ozil’s wages offloaded, the Gunners should have no problems affording his wages. The only issue would have been the price tag attached with the Brazilian, but the Catalan club seem to have reduced their asking price to a mere €35 million, which could push the London outfit to buy him.

A return to the green lands that earned him his dream move, Coutinho could very well cherish a homecoming to Liverpool. The club where he effectively made his name are currently struggling in the Premier League, and a lot of their struggle is down to a lack of creativity. Fullbacks Trent Alexander-Arnold and Andy Robertson have been the primary creative threat over which manager Jurgen Klopp has built his success, but this season they have both looked off-colour. Former Barcelona midfielder Thiago Alcantara was brought in as an alternative creative spark, but bar the one odd game here and there, he has hardly looked effective, especially in the final third.

With that in mind, the German manager could look just a little backwards in time and bring back the player he was forced to sell to Barcelona. Currently, Klopp employs a 4-3-3 at Liverpool, with his primary midfield trio looking to be three of captain Jordan Henderson, Fabinho, Georginio Wijnaldum and Thiago. As Dutchman Wijnaldum looks set to leave the club in the summer, it would be wise to invest in a midfielder, maybe someone more innovative.

This is where Coutinho could step in. In Klopp’s 4-3-3, the Brazilian could play as the left-sided advanced midfielder, a role he would be reprising from when he last played for Liverpool. With Henderson and Fabinho offering defensive-minded midfield options behind him, Coutinho could express himself fully once more. The midfielder’s tendency to cut in from the left and shoot could come in very handy, especially against low block teams that Liverpool are currently struggling against.

Alternatively, the arrival of Diogo Jota this season means that Klopp could also shift to a 4-2-3-1, in which Coutinho could play in the hole and compatriot Roberto Firmino would drop to the bench. With midfielders like Fabinho and Henderson behind and Virgil van Dijk behind them, defensive frailty should not be a question.

All in all, it is pretty clear why a move for the gem Klopp valued so highly would be beneficial for the Merseyside club – a dynamic threat and an uncanny long shooting ability could possibly mean a return towards pastures already grazed in earlier seasons.

The race for the Champions League spots is heating up in the Bundesliga, and Dortmund currently stand four points adrift of Eintracht Frankfurt in fifth place. The consistency that Frankfurt has shown this season and, by contrast, the inconsistency that Dortmund has shown means that it looks increasingly likely with each passing gameweek that the Black and Yellows fail to make it to the Champions League next season. In such a scenario, rumour has it that the German club may just have to offload their prized wonderkids Jadon Sancho and Erling Braut Haaland.

It is in this case that Dortmund could look towards someone like Coutinho. With Jadon Sancho offloaded, Dortmund will desperately miss a creative presence in their forward line, and the Brazilian could very well be the solution to this issue. New manager Marco Rose has often shifted between a 4-4-2 and a 4-2-3-1 at his current club Borussia Monchengladbach, and in the latter, Coutinho could be an excellent fit.

The former Liverpool man has Bundesliga experience under his belt which he garnered with current European and German champions Bayern Munich and has shown that he can be a great performer given a run of continuous games.

Moreover, new Barcelona president Joan Laporta has expressed a concrete interest in the Norwegian scoring machine Haaland. If that is the primary target for the Blaugranes for the coming season, a potential ‘swap’ deal could be arranged, lowering Haaland’s asking price, while remaining beneficial for both parties. While Dortmund remain focused on creating a youth system, if they are to break their trophy drought, an experienced head like Coutinho could be the exact solution they need.