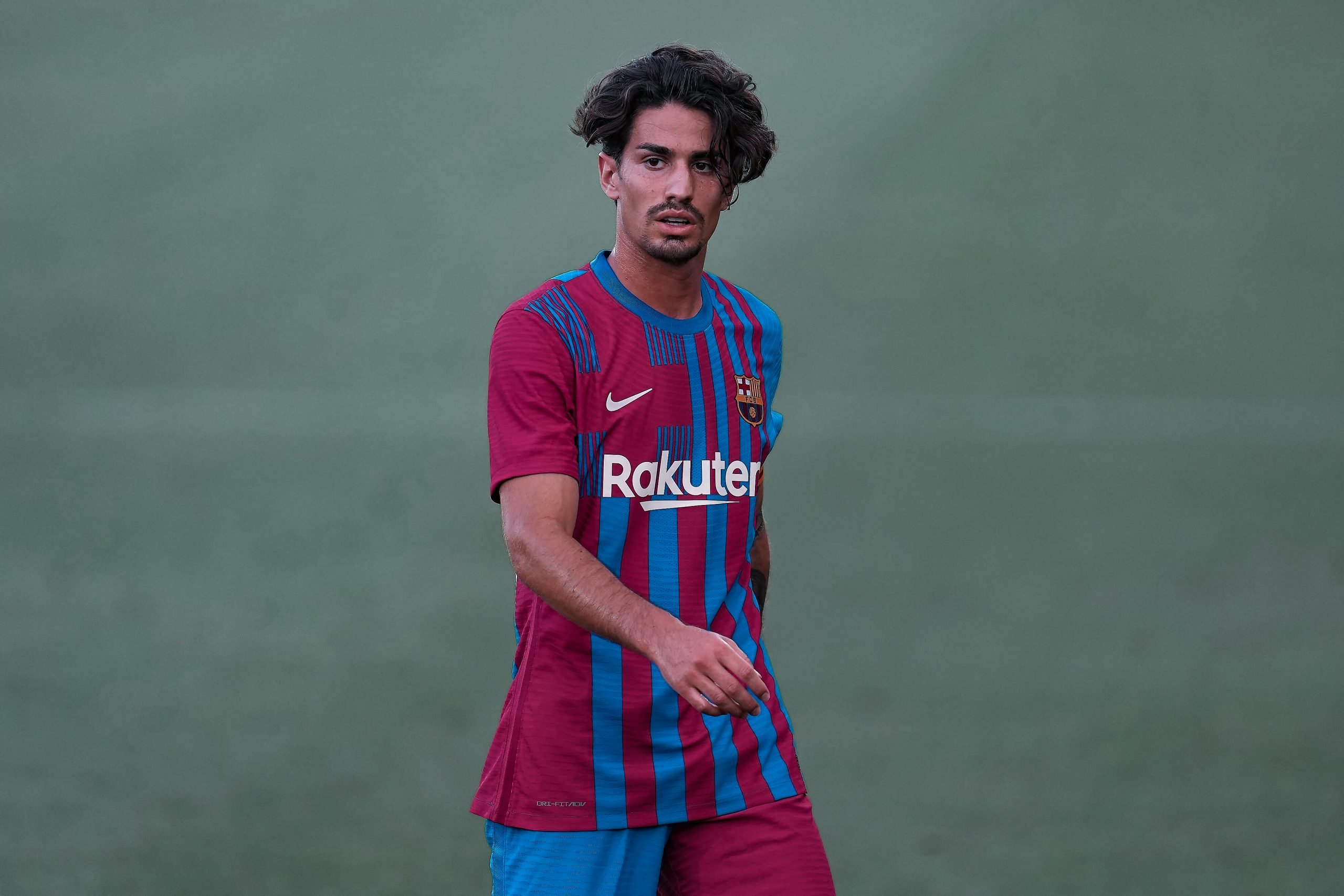 Over the last 2 seasons, the breakthrough of Álex Collado into the first team from Barcelona B has been inevitable.

All for good reason, it would appear. Not only is Collado a highly gifted footballer with a massively attractive and dynamic profile, but even on a personal level, the Spaniard has stayed true to the principles ascribed at La Masia through his sheer dedication to the club, even in the face of setbacks (be it delayed promotions to the first team or the signing of a winger in his exact position).

Collado has, however, stood by the St. George’s Cross and has finally received a beyond well-deserved advancement to the senior team at the onset of the 2021/22 season.

To the despair of Barcelona fans worldwide, it is virtually confirmed that the 22-year-old will not be staying at the Camp Nou this summer. Whether it’s the hugely unexpected breakthrough of Yusuf Demir, who occupies a highly similar position to Collado, or even just the massive roster of attackers that Barcelona have this season, the youngster would certainly face a limited number of opportunities to shine for the garnet and blue.

The obvious solution? A loan move. Barcelona would be highly foolish to offload a player with the talent of Collado. That said, it is clear that the Spaniard’s career is unlikely to advance without significant experience and playing time at the given stage of his career.

As reported by Fabrizio Romano, the most likely move for Collado appears to be Club Brugge. In any case, we’ll be analysing 3 possible destinations for him outside of Spain and Germany – as reported by Gerard Romero.

There are few clubs that are virtually loved. A compelling argument is to be made that Leicester City is one of them.

After the shocking 2015/16 title win, Leicester have remained a powerful side in England. With consecutive 5th place finishes, the Foxes appear at the brink of establishing themselves as a serious force in European football, lacking perhaps only the mentality and experience of top clubs in Europe.

That said, they are certainly getting there, and one of the facets of football that have both aided their rise to their current stature and will continue to do so is intelligent and thoughtful transfer business.

Unfortunately, few players value Leicester as a near-final destination. Their inability to attract top talents in the transfer windows cements their reputation as a non ‘traditional big six’ Premier League side. Look no further than James Maddison, who is rumoured to want to leave 5th placed Leicester for 8th placed Arsenal (sacrificing European football in the process).

Oddly, this works in favour of Alex Collado. With both Maddison and Ayoze Perez linked with moves away from the King Power Stadium, a massive creative hole is bound to be left, especially through their number 10. Funnily enough, Collado can occupy the roles left by either player in attacking midfield and right-wing.

Leicester stood at the very pinnacle of offensive performances in the Premier League last season with impressive goal creation numbers (and even competence in the final third).

The Foxes have rather undeservedly developed a reputation as a counter-attacking side, considering the level of comfort they operate with at breaking low blocks themselves (in fact, they have remained by far the attacking and dominant side against teams that use a more defensive style of play). Indeed, their reputation is only the product of out-and-out wide players and limited creative options.

In comes Álex Collado. Capable of playing in the roles of both Maddison and Perez, the Spaniards progressive passing numbers and ability to retain possession through his proficiency on the ball is perfectly aligned with the footballing direction Leicester have aimed to take as an attacking and dominant side.

Leicester have, frankly, been predictable in attack. Through reliance on Jamie Vardy in the final third and the odd strike from James Maddison, the wider flanks have been largely utilised as playmaking areas for a final cross into the box.

Collado counters this perfectly — in theory, at least. Playing in the right half-space, he brings a sense of unpredictability to the attack.

Not only can Collado alternate between the wide areas and the immediate centre of the pitch as a number 10 as the attack develops to function as a midfielder, but the 22-year-old is also a prolific attractor. Collado demands the attention of defenders seeing as he consistently moves to open areas of the pitch, leaving wide spaces open for their right back to occupy in the attacking third.

The constant winger-midfielder switch that Collado has aimed at perfecting is one that, at least tactically, remains open in Leicester’s squad and adds a bout of unpredictability. The immediate effect of Maddison’s departure would be creative options for Jamie Vardy.

Having played as a number 10 for much of his tenure at Barcelona B, he is perfectly capable of finding pockets of spaces between defenders and acting as a pivot for all attacking play.

On the wider side (where he is assumed to start), unlike Leicester wingers, the 22-year-old is a developed finisher of the ball.

For example, contrary to Perez, Marc Albrighton, or even Timothy Castagne, Collado functions as an inverted winger who cuts inside the pitch and finds open areas of the pitch rather than crossing the ball. It is bound to bring a hint of freshness in Leicester’s rather overused tactics (the result of poor squad depth) which arguably is what has caused the Foxes’ last-minute failures to achieve a top 4 position in the final moments of the league.

Leicester grew as a more formularized side as the league continued and would certainly be looking to add a hint of chaos in their team. There is no footballing profile more unpredictable than a dynamic and positionally fluid footballer, exactly what Collado is. If Brendan Rodgers and co. hope to cement their reputation as a force to be reckoned with, he could turn out to be a fantastic and cost-efficient signing for the short term.

Especially with the Europa League on the horizon for the Foxes (and its notoriously hefty schedule), Leicester will have to look to expand their squad depth, and an understudy can do them no harm.

Milan have broken through into the pinnacle of European football once again.

Or at least, relatively have. Milan’s previous seasons were characterised by subpar football and management and were a small shadow compared to their dominance in the early 2000s.

That said, they have significantly shaped up under the management of Stefan Pioli and technical director Paolo Maldini. It would appear that the Rossoneri are on the rise, and signs of the same have been discernible in the last 2 seasons.

Tactically, Pioli lines up in a 4-2-3-1 (subject to change considering the arrival of Olivier Giroud). The basis of football at Milan is highly reliant on the trident that plays off of the central striker.

That said, the most crucial of the three has departed for rivals Inter Milan in Hakan Calhanoglu. Milan, therefore, lack the creative flair they possessed in previous seasons and are at the very least aiming to cover it in part this summer.

They are, however, suffering financially. This does necessarily limit their transfer activity this year at the very least, so Milan may be looking towards a more financially feasible short term bridge in their midfield.

The stature of the player Pioli is looking for is one highly capable in the final third of attack but, above all, a competent creator and carrier of the ball.

The two wingers rarely operated on the wing for AC Milan last season. Instead, the wide playmaking burden lay on the fullbacks in Theo Hernandez and David Calabria, with a larger defensive onus on the two pivots in Ismael Bennacer and Frank Kessie. The wider midfielders, therefore, alternate as a 6 and an advanced 8 in attack, with the central midfielder occupying the role of a 10 that pushes higher on the pitch.

Collado is more than capable of acting as both, an 8 or a 10. With overlapping runs being made from the fullbacks, Zlatan Ibrahimovic can poach with ease and naturally attracts the majority of the defensive presence on the pitch.

As seen last season, this has left Çalhanoğlu, and Ante Rebic largely open on the edge of the box. Nearly all of the non-Zlatan goals by AC Milan were created through intelligent passing options between the fullbacks and the attacking midfielders and a final touch from an open midfield.

This naturally means that one of Milan’s demands, alongside competent playmaking, is a prolific finisher from deeper areas.

Collado has developed as a highly talented striker of the ball last season, racking up 8 goals from an xG of 3.5. Above all, he often asks for the ball at his feet in relatively wider positions and either carry it into open areas or provide it in tight spaces to midfielders: the exact hole left by Çalhanoğlu.

As a massively talented shot-creator, Collado will fit in like a glove into the Milan side. Albeit less developed than Çalhanoğlu, he can certainly slot in as a short term cover, especially as genuine long-term signings are made incredibly difficult owing to Milan’s finances.

Nonetheless, with Champions League football next season, the Rossoneri will be looking to rotate and would therefore require significant squad depth — a truly well-fitting destination for the youngster.

Ever since the appointment of Graham Potter, Brighton have been due a footballing revolution.

Potter’s management style is highly unorthodox, which has brought him to the centre stage as a professional coach. At a stage where, above results, personal development goes a far longer way in determining the trajectory of a player’s career, an environment like Brighton will undoubtedly be instrumental for Alex Collado.

Potter relies on a highly fluid tactical setup which, by logical correlation, relies on flexible and dynamic players, which, above all doubt, Collado is.

Albeit a right-winger by trade, the Spaniard is far more than a traditional wide player. In fact, he played a free role under Garcia Pimienta at Barcelona B owing to his positional dynamism. His proficiency with his left foot and ability to make incisive passes from the centre of the pitch means that Collado prefers to cut inside the pitch with his dominant left foot and operates as an auxiliary number 10.

Arguably the most crucial area in Brighton’s style of play is the right half-space, monopolised by Pascal Groß, acting as a pivot for the attack.

The Seagulls lineup in a flexible 3-4-3 or 3-5-2 with Leosandro Trossard capable of functioning as both a centre forward as well as a left-winger. The difference between the two formations, therefore, is a right-winger/central midfielder, which works brilliantly in Collado’s favour.

Groß is an ageing player, and above all, isn’t the fluid attacker that the 22-year-old is. Collado provides a little more attacking flair and pace in the right half-space.

With Lamptey highly capable of making overlapping runs and playing competent attacking football, there is plenty of space for Collado to occupy more central positions closer to a number 10, precisely as he did at Barcelona B.

Above all, the philosophy and principles with which Albion play are perfect in terms of the development of Collado as a future Barcelona player. As a team that builds from the back and relies on numerical superiority, the influence of a Guardiola-esque positional play has, at times, been seen in Potter’s games.

With an emphasis on fluid and intelligent positioning as well as possession-oriented football, the Seagulls are a fantastic destination for any player hoping to develop as an attack-minded and dominant footballer – the exact brand of football demanded by the Barcelona DNA.

Undoubtedly, Collado’s development at Brighton, considering the fact that he is frankly an upgrade from many of their creative players, will perfectly align with what will be expected of him next year at the Blaugrana.