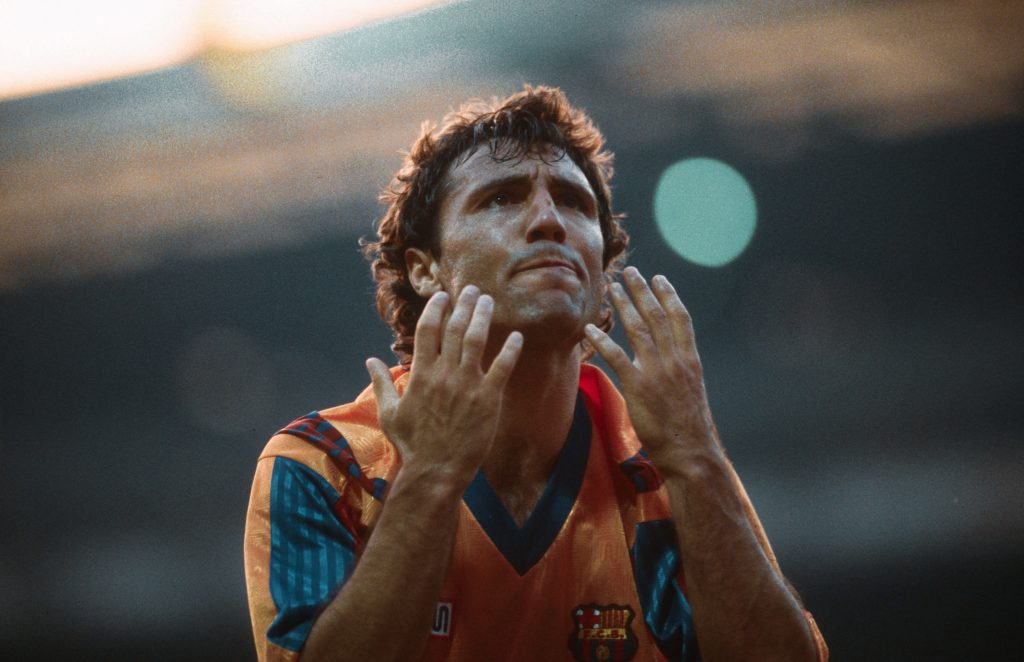 Header Image by Stockhoff via imago

On a day like today in 1992, a free-kick from Ronald Koeman gave Barcelona its first European Cup ever as it became a truly critical turning point in the Catalans’ history.

There was a time when not everything was rosy for FC Barcelona. While in the past decade a golden era has accustomed us to winning everything and aiming for perfection, in the form of trebles, not so long ago this was far from the case. Barcelona has always been a great club, an extraordinary club, with world-class stars and legends that have left their imprint on the institution and team. But, before Cruyff arrived in 1988, Barça wasn’t a winning club.

❛ Cruyff was a sensational player. He was also a winner. The change in mentality was brutal. It was like we had been drowning and now we were pulled out of the water ❜

Johan, like he did in his time as a player between 1973 and 1978, changed the culture at the club. He changed the approach and way of seeing things. Yet he also changed the mentality. Before 1990, Barcelona had won ten league titles in their entire history and no European Cups. The 1986 European Cup final had done a lot of damage to the culé fanbase. After a 0–0 at Sevilla against Steaua București, the Catalans lost in the continental final in the shootout as they missed all four penalties. It was a traumatic defeat.

Therefore, it was not surprising that, when Barça reached the European Cup final again six years later, few local fans were optimistic. There were even people who did not want to play that final, because of fear of another defeat. However, this time it was Cruyff who was in charge of the team. And that meant a lot. If anything described the Dutchman, that was his fearlessness and boldness to implement his ideas. Former winger Txiki Begiristain recalled: “Johan Cruyff was not scared of anything. When there are doubts, people tend to seek safety in numbers, to go with the herd. Not Cruyff. His first solution was always to be more attacking, more expansive. Three at the back and the centre-back is Ronald Koeman? Instead of full-backs, midfielders? Every time he sought a solution, he attacked more. And when he told us what he was doing, we thought: ‘Is he mad or what?'”.

Cruyff transformed the club, not only in the style implemented, but in the mindset too. From the fans to the footballers to the directives, everyone’s character changed. It was about relieving the pressure of playing football. His ultimate goal was entertaining, the viewers and themselves. So, before Barcelona took the field to face Sampdoria on 20 May 1992, Johan pronounced the iconic “Salid y disfrutad” (Go out and enjoy). That’s what the azulgranas did, as they prepared for the European Cup final at Wembley.

Nevertheless, it’s easier said than done. The Barça players were noticeably nervous in the opening minutes of the clash against a talented Sampdoria. The first half was a bit rusty, in which goalkeeper Zubizarreta and versatile defender Chapi Ferrer were the standout performers. After half-time, though, Barcelona abandoned their nerves and started enjoying. With Laudrup pulling the strings with his vision and tremendous technical quality, the Spanish giants had the better chances while they set up in a fluctuating 3–1–2–1–3 against the Italians’ man-oriented defensive approach.

As evident as the improvement was, the ghosts of the 1986 final appeared again. Minutes passed, but Barça couldn’t break the deadlock and transform their superiority into goals. With a goalless draw, the game went into extra time. It was time to pray, because most feared the worst. Again, minutes went by and the ball couldn’t find the net. First half of extra time, gone. Penalties were on the horizon.

Until Koeman appeared and dressed himself as the hero to cement a place in the club’s immortality. It was the 112th minute. 25 yards out, in an indirect free-kick, Ronald spotted the gap in the rushing Sampdoria defensive wall and beat the goalkeeper with an unstoppable strike. Koeman sprinted towards the sidelines to celebrate, using his fingers to hold back tears. This was it. This was finally it.

It was “liberation”, as Carles Rexach, Cruyff’s assistant coach and best friend, described it. “There were lots of people waiting for us to screw it up again, and the feeling was that another life starts. We were released”. It was third time lucky. After the defeats in 1961 and 1986, Barcelona finally got their hands on the big European trophy. Following 120 agonic minutes, the historic fatalism was defeated. With the goal of the greatest goalscoring centre-back of all time, Koeman built a indelible legacy and removed a heavy burden from Barça’s back.

While that was the only European Cup title from the Dream Team, as they would later lose in the final against Milan in 1994, the single continental trophy, alongside the four consecutive league titles and the enduring memories created, unleashed the national and international dominance of Barcelona for many years to come and particularly during the late 2000s. After the glorious triumph over Sampdoria 28 years ago, Barça finally started to believe that they could aim at the bigger prizes.

• Life at FC Barcelona before Cruyff